The dinosaur's skull case was found in pristine condition after 80 million years — and gave scientists an idea of its extraordinary hunting capabilities. 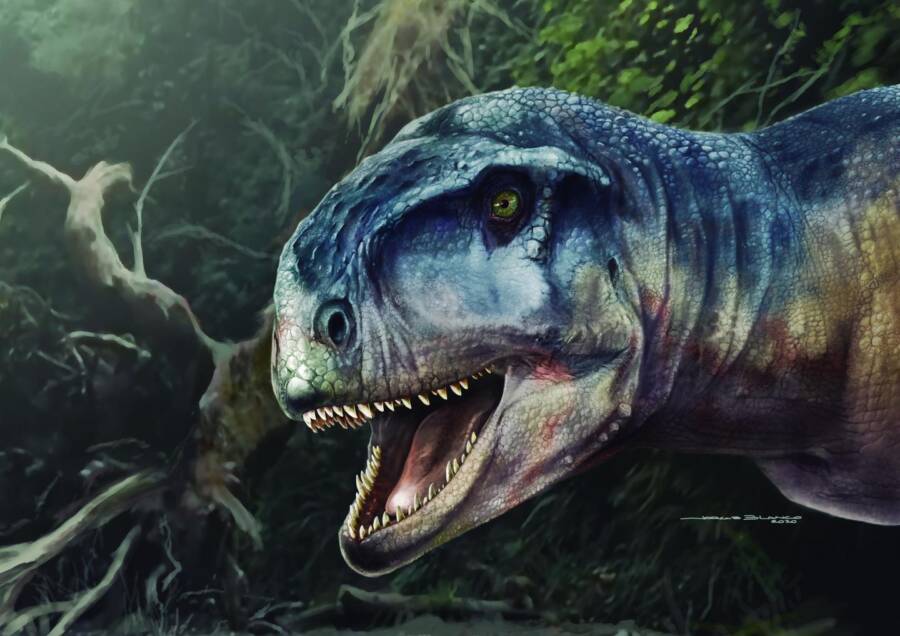 That evocative name was a combination of the Indigenous Mapuche tongue and Latin, with Llukalkan Mapuche for “the one who causes fear” and aliocranianus Latin for “unusual skull,” according to Sky News.

Measuring 16 feet long, with razor-sharp teeth, large claws, and a short skull covered in bulges and prominences, Llukalkan aliocranianus likely struck fear into its prey just with its appearance. But, what made the reptile a truly unique apex predator 80 million years ago was its extraordinary sense of hearing.

A study published in the Journal of Vertebrate Paleontology said it was as powerful as that of contemporary crocodiles. 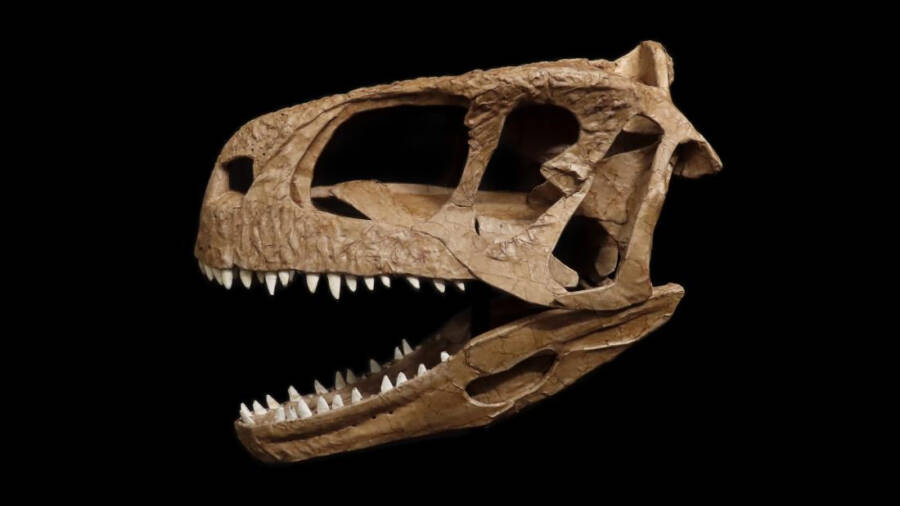 Journal of Vertebrate PaleontologyThe skull was covered in bumps and horns, with an air-filled sinus pocket in the ear zone providing advanced hearing.

Lead author Federico Gianechini explained that the strong sense of hearing provided by a unique sinus pocket was complemented by a powerful nose for prey. For Gianechini, a paleontologist of the National University of San Luis, Argentina, that combination was tremendously advantageous in the food chain.

“A peculiarity of this dinosaur is that it has cavities in the ear area that other abelisaurids [a class of carnivorous bipeds, including the T. rex] did not have, which could have given this species different auditory capacities, possibly a greater hearing range,” he said. “This, together with its keen sense of smell, would have given great capabilities as a predator.”

This fearsome predator roamed parts of what is now Africa, India, Antarctica, and Australia — in addition to South America. These astounding fossils were excavated in Argentina’s Bajo de la Carpa Formation, according to CNN.

Though the area is filled with fossils, the discovery of Llukalkan aliocranianus was accidental. Researchers were attempting to dig up a sauropod dinosaur (sizable plant eaters) near the city of Rincón de los Sauces. Mere days before completing the excavation, they spotted a curious set of abelisaurid bones protruding from the ground.

Experts were stunned to find a well-preserved skeleton with the dinosaur’s braincase still in pristine condition — entirely uncrushed — for 80 million years. 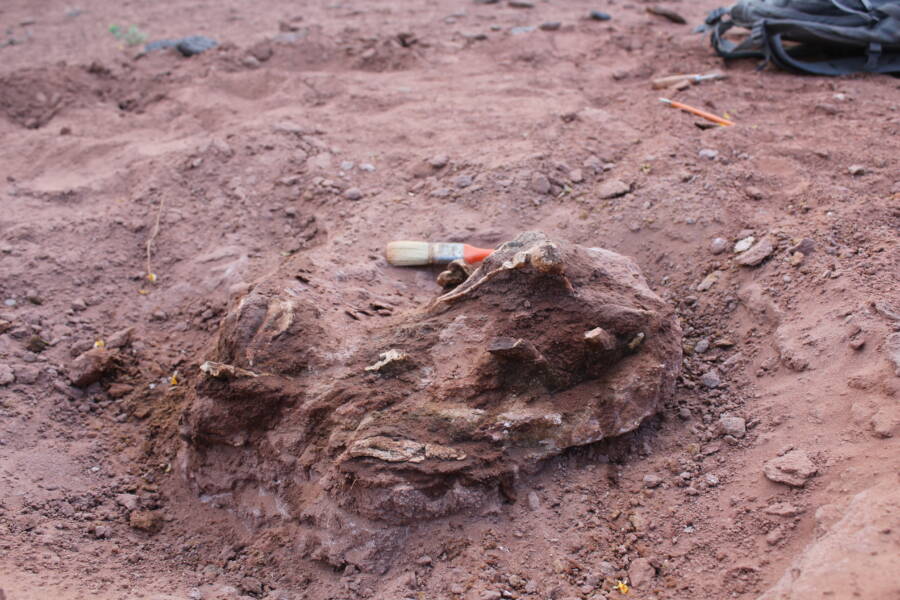 Dr. Federico GianechiniThe remains were found in 2015 but finally reconstructed and thoroughly studied ahead of the 2021 report.

This species largely resembled its fellow abelisaurid — the iconic predator, T. rex. It was found to be visually distinct, however, by the horned and bumpy head, plus the air-filled sinus pocket near its middle ear, which no other known abelisaurid had.

“These dinosaurs were still trying out new evolutionary pathways and rapidly diversifying right before they died out completely,” said Ariel Mendez, a paleontologist from the Patagonian Institute of Geology and Paleontology.

Gianechini trusts that the find signals many more important abelisaurid discoveries to come. The fact of the dinosaur’s hearing ability alone means that researchers have more to learn than previously thought.

“This is a particularly important discovery because it suggests that the diversity and abundance of abelisaurids were remarkable, not only across Patagonia, but also in more local areas during the dinosaurs’ twilight period,” Gianechini added. 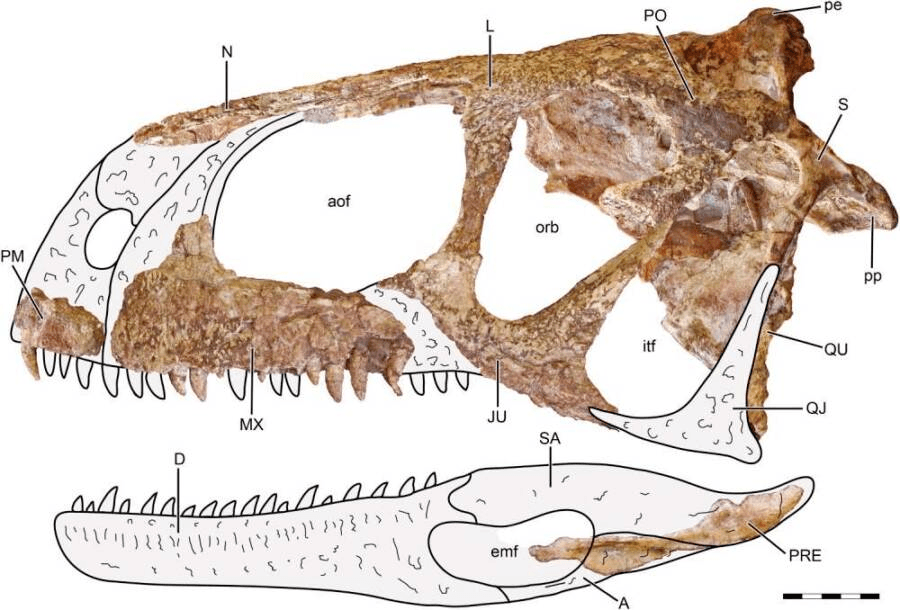 As Gianechini told Gizmodo, he and his peers are already attempting to decipher the gender differences and relationships of this species.

“Some say that the shape of the head and jaws could have helped to bite the prey, while the horns could have been used to bump into each other,” he said. “It is possible that there was a sexual differentiation, and that only the males had horns and that they fought each other, as many horned mammals do today.”

Ultimately, this discovery opens up new avenues of study for paleontologists as they continue to unlock the secrets of the prehistoric creatures buried just beneath our feet.

After reading about the new T. Rex-like dinosaur discovered in Argentina, learn about the Nodosaur “mummy” that was revealed with its skin and guts intact. Then, read about the largest dinosaur footprint ever discovered.

Marco Margaritoff
A staff writer for All That’s Interesting, Marco Margaritoff has also published work at outlets including People, VICE, and Complex, covering everything from film to finance to technology. He holds dual bachelor's degrees from Pace University and a master's degree from New York University.
You might also like
×
Follow ati On
Join The All That's Interesting Weekly Dispatch
Like Follow
Posting....