Meet Hans Langseth, The Man With The Longest Beard In History

The longest beard in the world belonged to Hans Nilson Langseth, a Norwegian-American man whose prized facial hair measured in at a whopping 17 feet and 6 inches long. 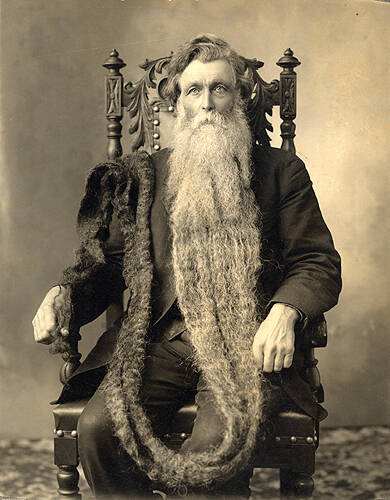 Hans Nilsen Langseth has one claim to fame. He was — and still is — the record holder for the longest beard in the world. Langseth’s beard was so renowned that it is still sitting in a Smithsonian vault to this day.

But anyone attempting to break his longstanding record had better start now … as it took Langseth nearly 60 years to grow his impressive whiskers.

Why Hans Langseth Grew The Longest Beard In The World

Langseth (pronounced like “dance”) was born in Norway on July 14, 1846. He was the fourth of five children, and when grown he and three of his brothers emigrated to America. He met his wife, Anne, and they ended up in Kensett, Iowa; which even today has a population of under 300 people.

He began growing his beard out at age 19 to enter a beard-growing contest. While it certainly wasn’t the longest beard in the world at that point, Langseth decided to just keep growing it. Through becoming a farmer and fathering six children, (Nels, Carl, Emma, H. William, John, and Peter) Langseth continued to forgo shaving his facial hair.

Unfortunately, Anne passed away at age 40; only six months after their last child, Peter was born. Langseth and the children moved to Glyndon, Minnesota, where he found land to farm to support his family.

The problem with growing the longest beard in the world, however, (besides needing incredible patience) is that beard hair can only grow about five feet before it dies. If you mat the dead hair together into coil-like dreadlocks, however, it adds a bit of length and strengthens the beard. This is what Langseth did, and it subsequently created a timeline of sorts for his life thereafter.

Brown hairs of the bottom half represent the hair color from his younger days and farming lifestyle (wheat kernels still fleck the beard hair) while the lighter, more yellowed parts of the beard represent Langseth’s elderly years. 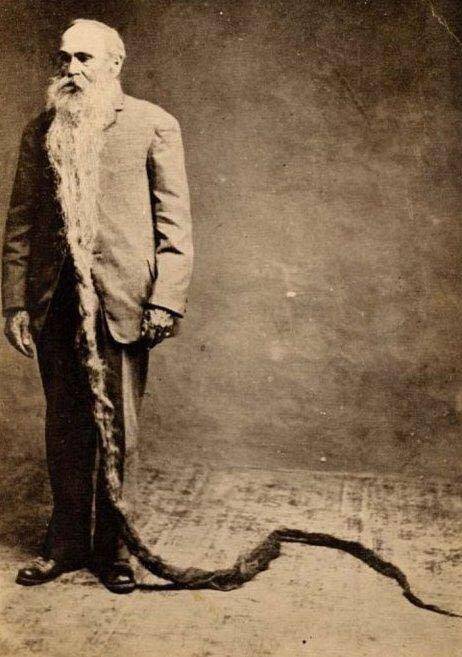 Bearded Oregon/FacebookHans and his amazing beard may hold the record for a very long time.

The beard’s record as longest in the country became official in 1922, at a celebration in Sacramento, California. A group of Sacramento beard enthusiasts called the Whiskerinos, formed in 1922 as a way of commemorating the California Gold Rush, put on the contest. Its members copied the look of gold rush miners, wearing period costumes and growing long beards.

Coming in a distant second place behind Langseth was Zach Wilcox from Carson City, Nevada. His beard measured 12 feet long, compared to Langseth’s at that time, an impressive 17 feet. As the winner, Langseth pocketed a handy sum of $300 and a paid ticket back home.

During his older years, Langseth relocated to North Dakota and joined a traveling circus freak show as a way to exhibit his trademark facial hair. After a while, he grew tired of people yanking his beard to confirm it was real. However, his family confirms that “he did like it when the Fat Lady washed his beard.”

You might think having that much hair descending from your chin would get in the way of daily activities. But Langseth got around this by wrapping it around a corn cob and tucking it into his vest pocket. He must’ve grown tired of it at least once, as he started to cut the beard off, only to have regrets halfway through and stopping.

When Langseth died in 1927, his beard was 18 and a half feet long. After his funeral, his surviving children cut almost all of the beard off for posterity (per Langseth’s last request). It went into storage in an attic, but they eventually ended up donating the 17.5 feet specimen to the Smithsonian.

The family buried Langseth in Kensett, next to Anne.

The World’s Longest Beard Lives On

The Smithsonian displayed the iconic, longest beard from 1967 to 1991 as part of a physical anthropology exhibit. Now, it remains in storage; only brought out a couple of times a year when Langseth’s descendants stop by.

Considering the inconveniences one would encounter with this long of a beard, Langseth was certainly committed to retaining his title. “You’d have to be a little eccentric to do this,” anthropologist Dr. David Hunt says.

Hans Langseth is sometimes confused with Hans Steininger — who was also a man with a long beard — but Steininger happened to be the mayor of Braunau am Inn, Austria, in the mid 16th century.

However, the townspeople would rather consider Steininger the more famous person from the town. As a beloved mayor and was well-known for his long beard, he risked his life to help save lives during a fire. That risk ended in tragedy when his beard came loose from being tucked in his pocket — tripping him and causing him to fall down a flight of stairs and breaking his neck.

As for Langseth, he enjoyed a long life being well-known in his own right. When he died from natural causes at age 81, he probably had no idea that he’d still hold the record for the longest beard in the world almost 100 years later.

Next, read about Robert Wadlow, the world’s tallest man. Then meet the woman with the longest legs on record.