Inside Earlshall Castle, The Sprawling Scottish Mansion Haunted By A 17th-Century Baron That’s Currently For Sale

Earlshall Castle in Leuchars, Scotland, was built in 1546 and has 10 bedrooms, six bathrooms — and the ghost of "Bloody Bruce" that allegedly haunts its stairs. 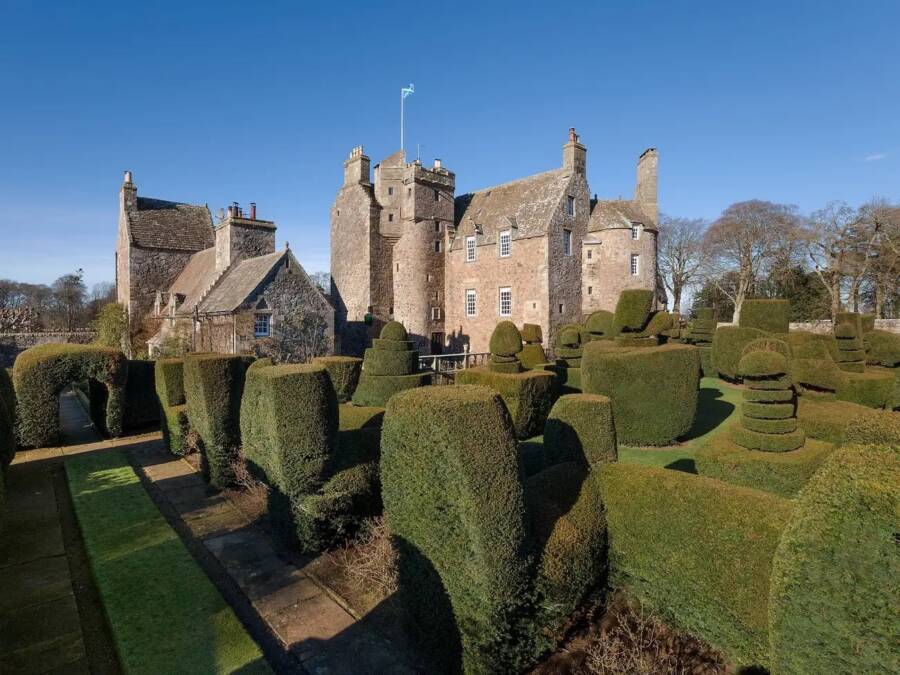 SavillsThe property spans 53 acres total, with 34 acres comprising the castle and its immediate grounds and an additional 19 acres for grazing.

Earlshall Castle wasn’t always haunted, but the Scottish fort is undoubtedly said to be so today. While the sprawling property currently sits empty, some say the ghost of its former owner still resides within. For those able to put up with a 17th-century spirit named “Bloody Bruce” for his violent temper, that property is now up for sale.

According to Insider, Earlshall Castle is 55 miles from the capital of Edinburgh with 10 bedrooms, eight reception rooms, and six bathrooms.

Despite its ample living space, its central spiral staircase may be less of a draw to prospective buyers.

It is here, upon the steps that lead through the castle’s three floors, that Sir Andrew Bruce’s spirit allegedly floats throughout the day. A descendant of Sir William Bruce, the 17th-century baron, had inherited the property after defeating a Scottish group of Presbyterians in 1680 — and cutting off their hands and heads in battle. 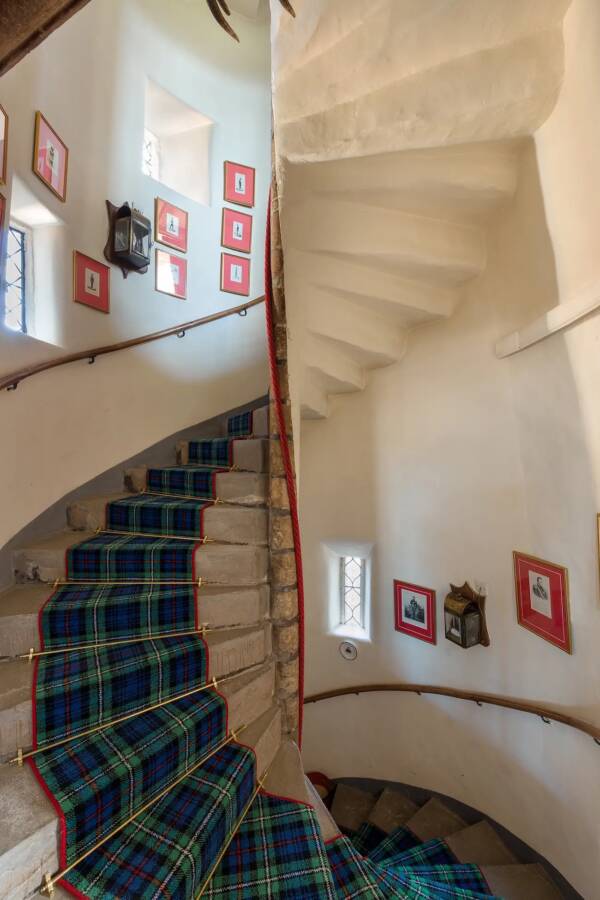 According to The Smithsonian, however, the agency listing it hasn’t been too keen on mentioning Bloody Bruce — as his name appears to be “unhelpful” with sales, preferring to focus on its ample living space.

According to Savills, the castle grounds are comprised of 34 acres with an additional 19 acres of grazing. They hold beautiful walled gardens, added in 1890, that surround topiary lawns, a bowling green, a rose terrace, and even another, secret garden.

Sir William Bruce named the castle after “The Erlishall,” a hunting lodge owned by the Earls of Fife. These were relatives of Robert the Bruce, who became King of Scots in 1306 and led the occupied territory against England during the First War of Scottish Independence.

Sir Bruce broke ground in 1546 and would welcome high-born visitors, including Mary Queen of Scots in 1561 and James VI of Scotland — who would later become James I of England. The monarchs had ridden from the royal palace of Falkland to take advantage of Earlshall’s unparalleled hunting grounds.

However, the castle’s most infamous tenant was Sir Andrew, the “Bloody Bruce.” The 5th Baron of Earlshall, Andrew inherited the fortress in the 1600s. At the time, a group of Scottish Presbyterians called Covenanters were protesting the British monarchy for serving as head of the Church of Scotland — which Sir Andrew violently defended. 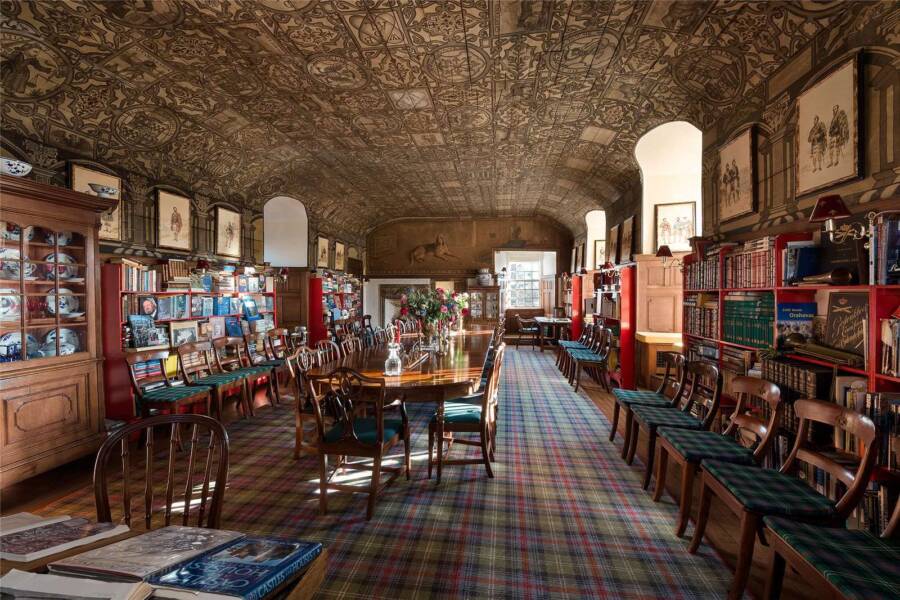 While historians disagree about the date of his nickname’s etymology, the reason behind it remains clear. Whether he was christened “Bloody Bruce” after the Battle of Airds Moss in 1680 or the Battle of Killiecrankie in 1689, the Baron of Earlshall was so ruthless on the battlefield that no other name would do.

As a supporter of King Charles II’s reign over his country’s religious institutions, Sir Andrew is said to have hacked the head and hands off Covenanter Richard Cameron. And although Sir Andrew died in 1696, the ruthless warrior is said to have continued inhabiting the Earlshall Castle halls.

After being inherited by the Henderson family of Fordell, the property was sold in 1824 and subsequently fell into dereliction. It traded hands for more than half a century before architect Robert Lorimer made thorough restorations beginning in 1890, adding three guest cottages and renovating ruinous parts of the castle.

“The magic is all Sir Robert Lorimer, who restored the castle and laid out the gardens,” said Jamie Macnab, a real estate agent with Savills. “It is a genuine castle with vaulted ground floor rooms, a Great Hall, secret spiral stairs and musket holes.” 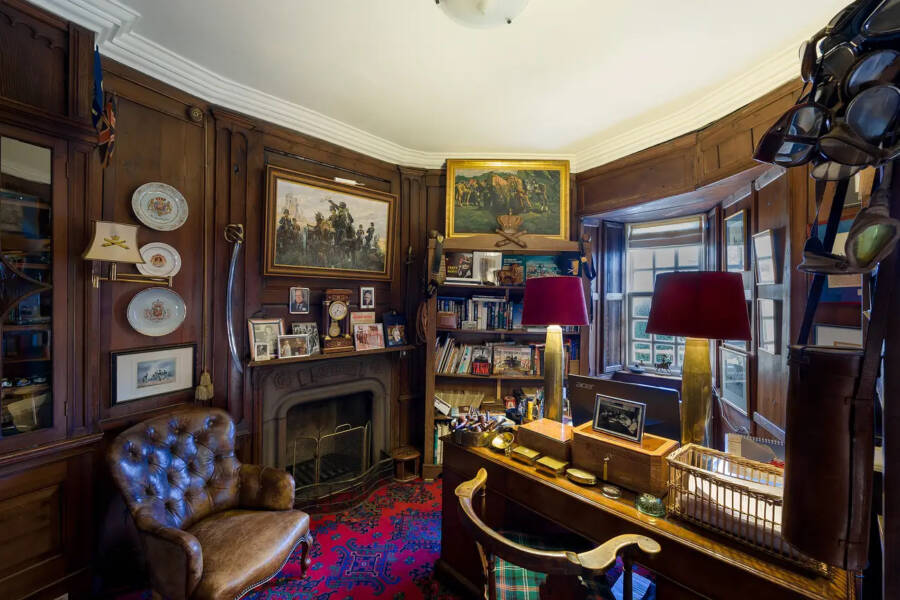 The kitchen holds tiled stone floors and a modern dishwasher, fridge, and freezer. The sitting room comes with antique watercolor paintings, while the Great Hall has a fireplace and walls made of timber panels.

The dining room, too, has a fireplace and an alcove. The library and adjacent study hold two fireplaces and a built-in bookshelf and golden chandelier.

And while the alleged sound of footsteps of Sir Andrew on the staircase seems like a good cause to sell the 500-year-old castle, the real reason for the sale is far more wholesome.

“I have sold Earlshall Castle twice before in my 35 year career,” Macnab said.

“It is a very special place. The present owner is wanting to move back to Holland to be nearer to his grandchildren.”

After reading about Scotland’s haunted Earlshall Castle going up for sale, learn about 7 haunted castles that will send chills down your spine. Then, read about Caerlaverock Castle’s 800 years of Scottish history.