Lonnie Johnson was born in Alabama in 1949. The odds seemed stacked against him, but the young genius worked his way to NASA and later, to multi-millions.

It’s easy to assume that the creators of the vast majority of children’s toys are likely boasting strong backgrounds in marketing, advertising, or even the creative arts. Yet perhaps one of the most impressive pedigrees in the arena of toy inventions comes from none other than a former engineer with both the United States Air Force and NASA, meet Lonnie G. Johnson, the inventor of the Super Soaker.

His storied career has spanned over 40 years touching everything from the Stealth Bomber Program to the Jet Propulsion Lab where he worked with the nuclear power source for the Galileo mission to Jupiter.

Yet in the midst of all of these highly specialized and scientific endeavors, one of Johnson’s most celebrated achievements is now easily one of the most iconic symbols of childhood summer fun that the world has ever known: the Super Soaker water gun.

The Super Soaker is an instantly recognizable and continually high-selling toy. In the year 1991 alone, the Super Soaker made over $200 million in sales and has since consistently ranked in the Top 20 of the world’s best-selling toys.

Yet despite the wild success of his particularly delightful invention, Lonnie G. Johnson’s success was in no way guaranteed, or even, likely.

The Early Inventions Of Lonnie Johnson 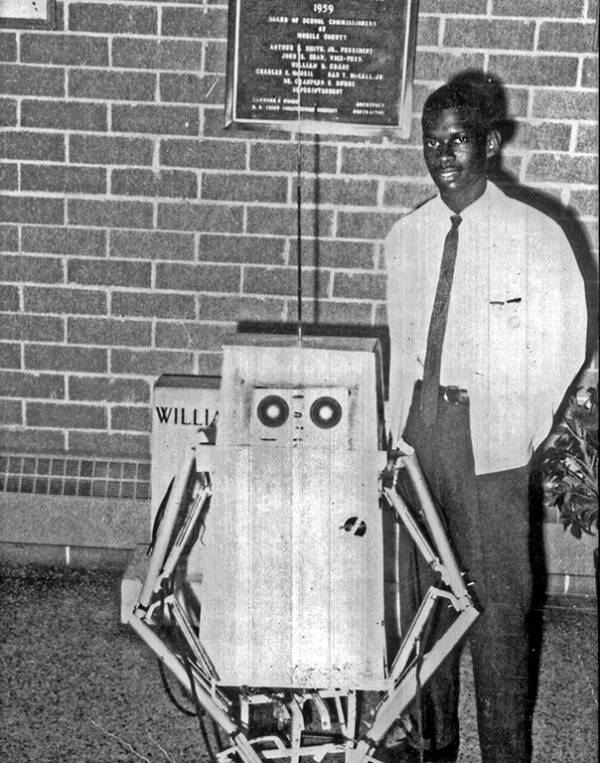 Lonnie JohnsonLonnie Johnson beside his first robot, Linex, with whom he won first prize at an Alabama science fair.

As an African American born into a segregated Alabama on October 6, 1949, Lonnie George Johnson was, from the moment of his birth, faced with an uphill battle. Yet despite the circumstances of the world around him, Johnson’s supportive parents helped to set the wheels of his young analytical mind in motion. In a 2016 essay with the BBC, Johnson writes about early memories of his father’s teachings with fondness:

“It started with my dad. He gave me my first lesson in electricity, explaining that it takes two wires for electric current to flow – one for the electrons to go in, the other for them to come out. And he showed me how to repair irons and lamps and things like that.”

Once this spark was ignited, there was no stopping Lonnie Johnson.

“Lonnie tore up his sister’s baby doll to see what made the eyes close,” his mother recalled. Once, in an effort to create rocket fuel in one of his mother’s saucepans, Johnson almost burned his house down when it exploded on the stove.

His affinity for engineering made his peers refer to him as “The Professor.” One of the young “Professor’s” first creations was a small engine made of scrap metal that was affixed to a go-kart. All the crude racecar needed to run on its own were a few pushes with a running start and a string-operated steering wheel.

Johnson and his friends cruised the Alabama streets of their neighborhood right up until the police put a stop to their fun — after all, despite its impressive nature, the little go-kart was hardly street legal.

The 1960s proved a prudent time during which Johnson’s curious mind could flourish. Between the Space-Race and America’s burgeoning fascination with an automated future, Lonnie Johnson took cues from popular programs like Lost in Space for his next major creation. This required a bit more time and energy than the scrapyard engine he had previously made.

After a full year of work on a personal robot, Johnson entered his invention into the Junior Engineering Technical Society Fair at the University of Alabama in 1968. While a notable accomplishment in and of itself, Johnson’s entry took on an even more significant role as it was the only entry from an entirely black high school.

The robot, named Linux, stood at three and a half feet tall with rotating shoulders, elbows, and wrists that could swivel, and the ability to move and pivot on a set of wheels. Johnson consequently took home first place at the fair and after graduation, found himself at Tuskegee University on a mathematics and U.S. Airforce scholarship, and there he worked on stealth bombers.

“In spite of the things that have been perpetrated on my race – holding us in bondage under slavery, then making it illegal to educate us and then subjecting us to long-term discrimination and criticism – we succeed anyway, to a very large extent. We just need to realize what we’re capable of.”

Life As A NASA Engineer

After college, Lonnie Johnson eventually found himself at NASA. Undoubtedly a coveted job for any engineer, Johnson’s rise to the premier space exploration agency in the world is made all the more impressive by the fact that he was invited to work on the Galileo mission.

The Galileo mission involved sending an unmanned spacecraft to study Jupiter and its many moons. Johnson’s primary responsibilities included attaching the nuclear power source to the spacecraft and providing power to the science instruments, the computer, and the power control system. True to Johnson’s character, among all of these highly important duties, he still managed to innovate. 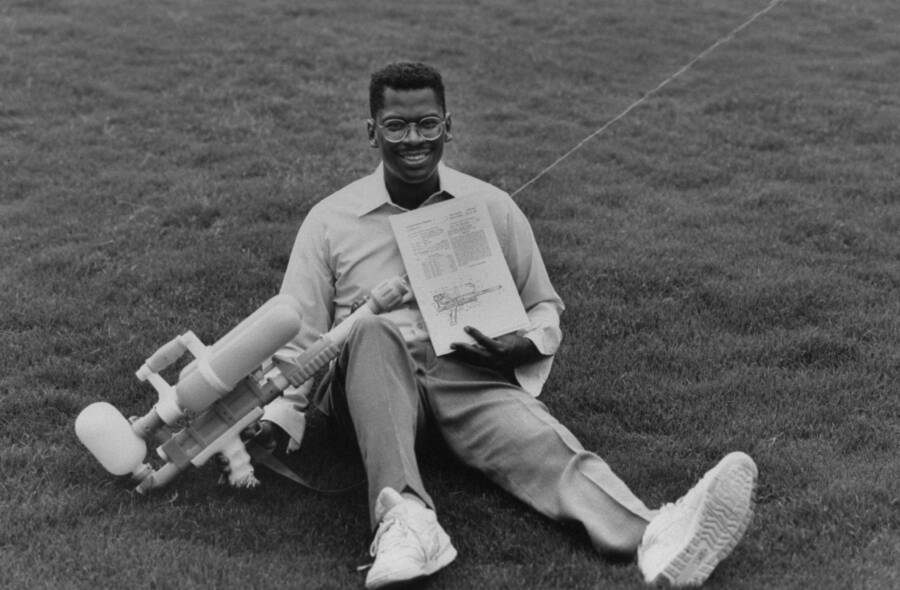 “A major concern was that in the event of a short circuit, power to the memory would be lost and the spacecraft would be unable to call home. So I devised an isolation circuit that would maintain power to the computer memories even when power was lost.”

Johnson would go on to attain 120 patents.

With a mind as active and hungry as Lonnie Johnson’s, it is no surprise that he continued to tinker with his own inventions in his spare time.

Becoming The Inventor Of The Super Soaker

By 1982, Lonnie Johnson had been experimenting with a new type of refrigeration system that would use water instead of CFCs (chlorofluorocarbon) which damage the ozone. This led him to hook up a mechanized nozzle to the faucet in his bathroom sink where he was carrying out some of his experiments.

The nozzle helped propel a powerful stream of water across the sink, and this seemingly inconsequential occurrence planted the very first seed in Lonnie Johnson’s head that a hyper-powerful water gun could be a fun and lucrative invention.

“I accidentally shot a stream of water across a bathroom where I was doing the experiment,” he recalled to Popular Mechanics. “And thought to myself, ‘This would make a great gun.'” 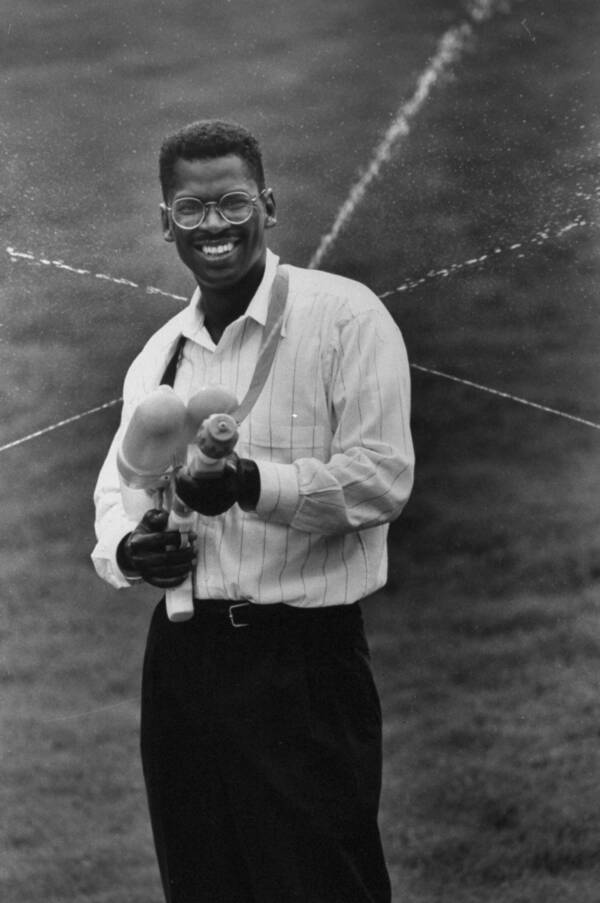 Thomas S. England/The LIFE Images Collection via Getty Images/Getty ImagesLonnie Johnson’s first focus group included himself and his daughter in their backyard. It became clear his invention would be an instant hit.

It didn’t take long for Lonnie Johnson to begin making the necessary parts for the new water gun in his basement. Once his first rough prototype was complete, he decided to take it for a test run with the toy’s ideal audience: his seven-year-old daughter Aneka.

It became clear almost instantly that this invention was the real deal. His heavy-duty water gun soon became a hot topic at social gatherings.

After rejoining the Air Force, Johnson took his creation to a military picnic where one of his superior officers saw the toy and asked what exactly it was. After a brief explanation and an inquiry as to whether or not it actually worked, Lonnie G. Johnson shot his superior officer right in the face. The result? An all-out water fight and the confidence to begin shopping his invention to various toy companies.

In conversation with the inventor of the Super Soaker himself.

What followed for Johnson was seven years of back and forth trying to sell his invention. Johnson consequently redesigned his initial prototype by adding the now-iconic water reservoir on top of the gun. The new and improved version of the gun also came with a new and improved water stream – with a range that extended more than 40 feet.

Lonnie Johnson soon took a meeting with a Philadelphia-based toy company called Larami and, naturally it didn’t take long to win over the marketing, advertising, and sales executives.

All it took to sell the toy was one powerful shot across the conference room. 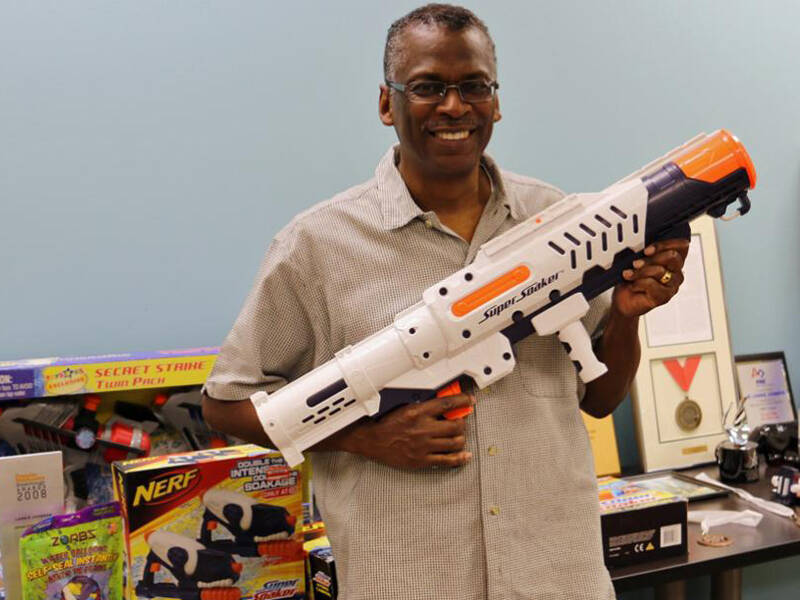 By the time the Super Soaker hit the market in 1990, the toy’s future success became clear.

Initially marketed as the Power Drencher, the toy hit shelves without any marketing or television commercials and still managed to sell quite well. The following year, in 1991, the Power Drencher was rebranded as the Super Soaker. With the power of television ads now behind it, the water gun’s sales increased exponentially.

Super Soaker sold 20 million in its first summer alone and helped to launch Lonnie G. Johnson’s already illustrious career into the stratosphere. New and improved iterations of the Super Soaker would follow year after year, but at the same time, Johnson began to design varieties of Nerf guns. These toys brought in even more royalty checks since they were a toy that was could sell year-round.

With a net worth of over $360 million dollars, Lonnie Johnson is not content to simply spend it on luxury goods and private jets. Instead, the inventor used his fortune to open his own scientific research facility in Atlanta, Georgia where he employs a staff of 30 who are currently working on various projects ranging from the development of an all-ceramic battery that can hold three times the charge as its lithium-ion predecessor, to a converter for solar power plants.

Johnson’s diligence and ingenuity have proven to be excellent themes to share with the country’s youth.

An ‘Ask Me Anything’ session with nuclear engineer and Super Soaker inventor Lonnie G. Johnson.

“Kids need exposure to ideas, and they need to be given an opportunity to experience success. Once you get that feeling, it grows and feeds itself – but some kids have got to overcome their environments and attitudes that have been imposed on them.”

While the mythical American dream may still elude many, Lonnie Johnson’s can surely serve as inspiration for anyone and everyone who has ever strived for something more, something new, and sometimes even, something fun.

After this look at Lonnie Johnson, NASA engineer, patent-holder, and inventor of the Super Soaker, check out the eclectic and bizarre story of Adolphe Sax, the guy who invented the saxophone. Then for more in black history, read up on Ann Atwater who fearlessly got a Klansman to join her in desegregating their city’s schools.