The Ugandan mother of 38 surviving kids had an immensely difficult childhood of her own. All she wants is for her children to go to school, have enough food, and help around the house. 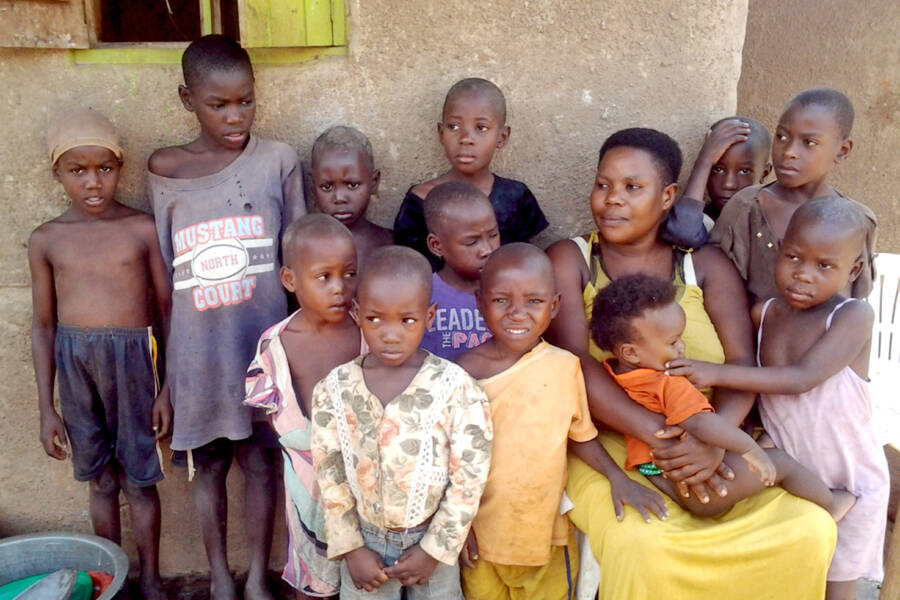 Henry Wasswa/Picture Alliance/Getty ImagesThe 40-year-old mother and 12 of her children take a rest in front of one of their four houses. Her youngest daughter, Sudaisha, sits on her lap. April 28, 2017. Kasawo, Uganda.

There’s nothing more important than family, which this Ugandan mother of 44 has certainly taken to heart. According to 7 News, Mariam Nabatanzi gave birth to four sets of twins, five sets of triplets, and five quadruplets by the time she was 36. Doctors have since prevented her from birthing any more.

According to Newshub, Nabatanzi told local media that doctors performed a surgery on her uterus in order to stop her from getting pregnant again.

Dubbed “the world’s most fertile woman,” Nabatanzi was sold into marriage at an extremely young age. A bride at 12 years old, she gave birth to her first child one year later.

Unfortunately, her unreliable husband — who was 40 when he married her — left Nabatanzi and their 38 surviving kids four years ago to fend for themselves. According to The Mirror, the peculiar pregnancy ban came when doctors found that her father had 45 kids in his lifetime, himself.

It has since been discovered that she suffers from a rare genetic condition that produces an unusually high amount of eggs. A local doctor warned her that taking birth control pills could cause serious problems for her unusually large ovaries.

Thus, after that first set of twins was born — Nabatanzi’s babies just kept coming. The struggles from two twins to 44 children, six of them now dead, however, has been anything but jovial.

A DW News segment on Mariam Nabatanzi and her children.

The now-40-year-old mother works whatever odd jobs she can find in the impoverished village near the Ugandan capital of Kampala. Nabatanzi sells herbal medicine, sells scrap metal, works as a hairdresser, and even helps decorate local events.

The resilient Ugandan lives with her children in four small houses made with cement bricks and corrugated iron roofs in a village surrounded by coffee fields.

While Ugandan families are definitely larger than many other nationality standards (at 5.6 children on average), Nabatanzi’s struggle is directly tied to her genetic disorder. When she found herself with 25 children at the age of 23 — she begged her doctor to put an end to this problem however possible.

Nonetheless, she gave birth as recently as three years ago. Tragically, one of the babies in that sixth set of twins died while she was in labor. That’s when her husband — whose name is permanently cursed in Nabatanzi’s household — left the single mother for good.

“I have grown up in tears, my man has passed me through a lot of suffering,” she said. “All my time has been spent looking after my children and working to earn some money.” 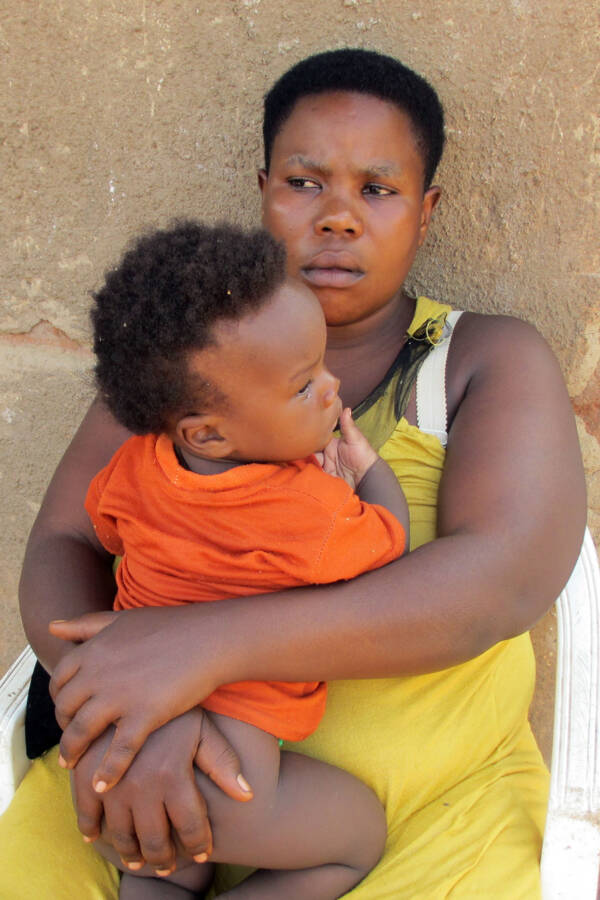 Henry Wasswa/Picture Alliance/Getty ImagesWhen Nabatanzi was seven years old, her stepmother poisoned her five siblings by mixing in glass with their food. They all died. She’s entirely committed her life to make sure her children have a better one than she has had. April 28, 2017. Kasawo, Uganda.

Fortunately, that last pregnancy also led to Nabatanzi finally getting the medical help she always needed.

“Her case is genetic predisposition to hyper-ovulate, which is releasing multiple eggs in one cycle, which significantly increases the chance of having multiples; it is always genetic,” said Dr. Charles Kiggundu, a gynecologist at Mulago Hospital in Kampala.

Nabatanzi explained that Dr. Kiggundu had “cut my uterus from inside” in order to prevent her from having any more children. The kids she does have, like 23-year-old Ivan Kibuka, however, are highly aware of how hard she works to provide them with a decent life.

“Generally, I have tried to educate them,” said Nabatanzi. “My dream is that my children go to school. They can lack anything [else], but they must go to school.”

Nabatanzi proudly hangs photos of her children’s school graduations on the wall, but Kibuka had to drop out in order to help his mother.

“Mum is overwhelmed, the work is crushing her, we help where we can, like in cooking and washing, but she still carries the whole burden for the family,” said Kibuka. “I feel for her.” 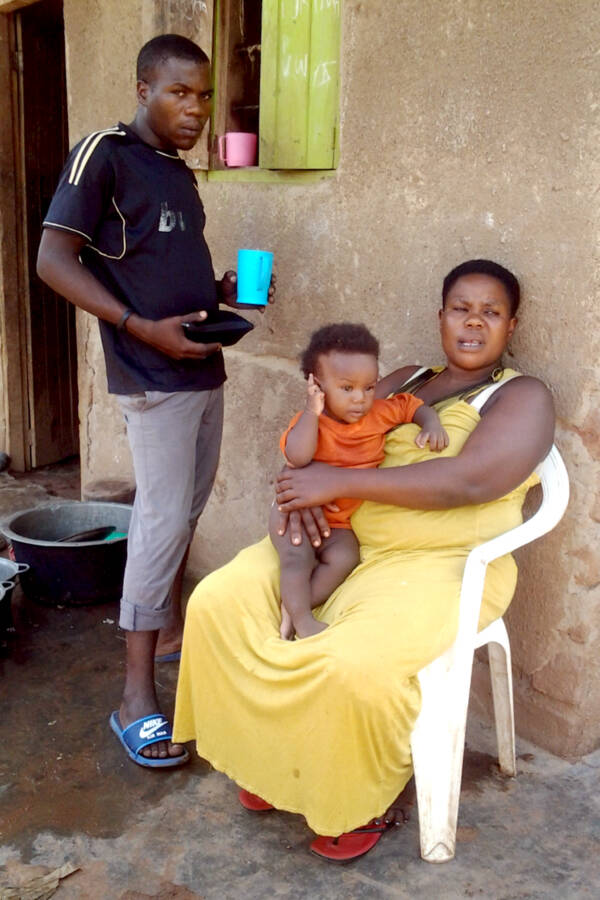 Henry Wasswa/Picture Alliance/Getty ImagesNabatanzi’s eldest son (left) quit school in order to help his mother with the workload. The family has a schedule of chores posted on the wall to dictate everyone’s daily responsibilities. April 28, 2017. Kasawo, Uganda.

In comparison to Nabantanzi’s parents, she’s a godsend to her children.

After Nabatanzi’s mother left when she was a child, her father re-married. The new stepmother poisoned her five older brothers by mixing pieces of glass into their food. They all died. The only reason she survived was because she was visiting a relative at the time.

“I was seven years old then, too young to even understand what death actually meant,” she said. “I was told by relatives what had happened.”

Her current day-to-day household duties essentially consist of working odd jobs and cooking for her kids. A dozen of her children sleep on metal bunk beds and thin mattresses, while others share mattresses on the floor — or sleep in the dirt.

Nabatanzi cooks 55 pounds of maize every single day, with protein like fish or meat being a rare addition. Nonetheless, everybody helps cook and clean.

“I started taking on adult responsibilities at an early stage,” Nabatanzi recalled. “I have not had joy, I think, since I was born.”

With a wooden board on the wall that dictates everyone’s daily chores, things usually run smoothly. It reads, “On Saturday, we all work together.”

After learning about the Ugandan mother of 44 who has a rare genetic condition leading her to hyper-ovulate, read about Oregon State taking children away from parents due to their low IQs. Then, learn about Irena Sendler, the woman who saved 2,500 Jewish children during the Holocaust.