Marie Colvin: The Reporter Who Gave Up First An Eye, Then Everything, To Bear Witness

Award-winning correspondent Marie Colvin gave an eye to tell the truth on the Sri Lankan Civil War, and when civil war broke out in Syria, she gave her life. 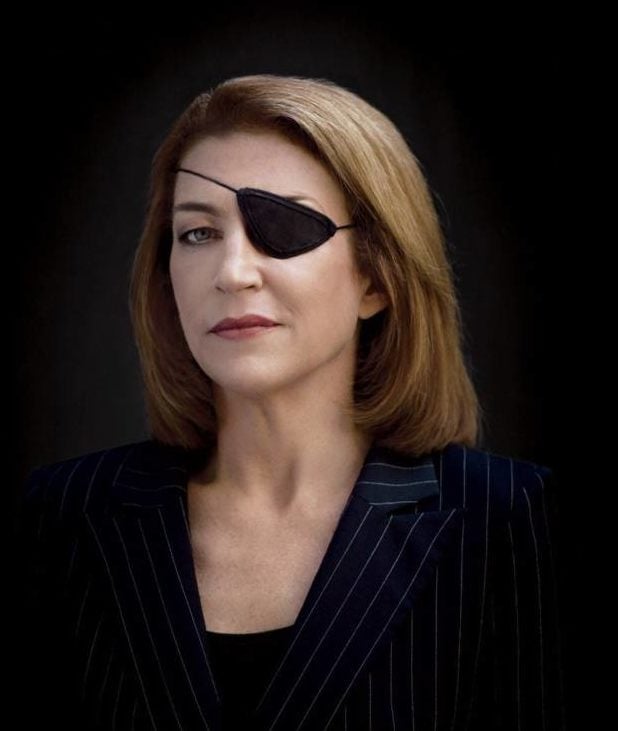 Trunk Archive.A 2008 portrait of Colvin by the photographer and musician Bryan Adams.

Marie Colvin, the larger-than-life journalist who descended into war without a blink, seemed to be more like a character out of a comic book than an American foreign affairs correspondent for a newspaper — and not just because of her eyepatch.

Colvin voluntarily went where most wouldn’t have dared. She ventured into Homs, Syria on the back of a motorcycle in the middle of a civil war when the Syrian government had explicitly threatened to “kill any Western journalist found in Homs.”

This perilous mission, though, on Feb. 20, 2012, would prove to be Marie Colvin’s last report. 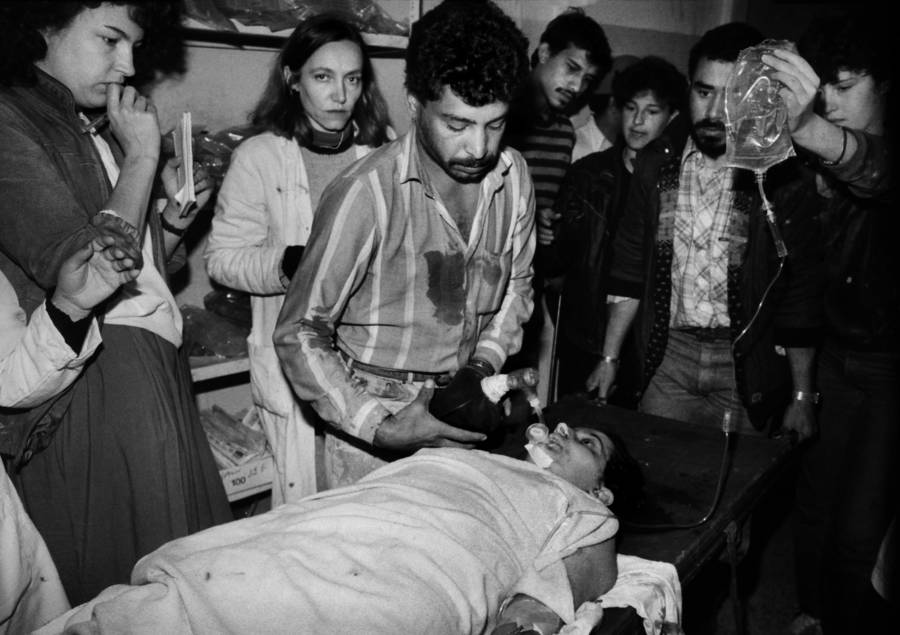 Tom Stoddart Archive/Getty ImagesA young Marie Colvin, on the far left, inside of the Bourj al-Barajneh refugee camp near Beirut, Lebanon in 1987, watching a colleague struggle to save a refugee’s life.

Marie Colvin, though Queens-born in 1956 and a Yale grad, found a home abroad, whether in Europe or in places of deep conflict. She <a href="http://started her career in journalism with United Press International (UPI) in Paris before transitioning to England as the Foreign Affairs Correspondent for The Sunday Times in 1985.

It didn’t take her long to make a name for herself. In 1986, her second year at the paper, she became the first to interview Colonel Moammar Gadhafi after the United States bombed his home and killed his infant daughter. The Colonel took something of a liking to the young journalist and requested that she wear green shoes and even asked for some of her blood.

The following year in Iraq Colvin met her first husband, Patrick Bishop, a diplomatic correspondent for The Times. They had a short marriage as Bishop had an affair while Colvin was off on assignment.

But Colvin was hearty in relationships as she was in her career. She fell in love again and remarried in 1996 to a fellow journalist, Bolivian-born Juan Carlos Gumucio. Their relationship was reportedly tempestuous, and Gumucio committed suicide in 2002.

Early Years In The Field

Known for her attention to detail and ability to humanize the inhumane, Colvin rushed into combat zones with an almost careless disregard for her own life and oftentimes did more than report.

In 1999, when East Timor was fighting for independence from Indonesia, Colvin stationed herself inside of a United Nations compound alongside 1,500 refugees, all of them women and children, besieged by an Indonesian militia threatening to blow the building to pieces. Journalists and United Nations staff members alike had abandoned the city. Only Colvin and a handful of partners stayed with her, holding the place to keep the people inside safe and the world aware of exactly what was happening.

She was stuck in there for four days, but it paid off. All the publicity her stories had generated put immense pressure on the world to act. Because she’d stayed there, the refugees were evacuated, and 1,500 people lived to see another day.

Colvin, always aloof even when a hero, quipped once she had returned to safety: “What I want most is a vodka martini and a cigarette.”

For Marie Colvin, reporting the difficult and extreme was obvious. “There are people who have no voice,” she said. “I feel I have a moral responsibility towards them, that it would be cowardly to ignore them. If journalists have a chance to save their lives, they should do so.” 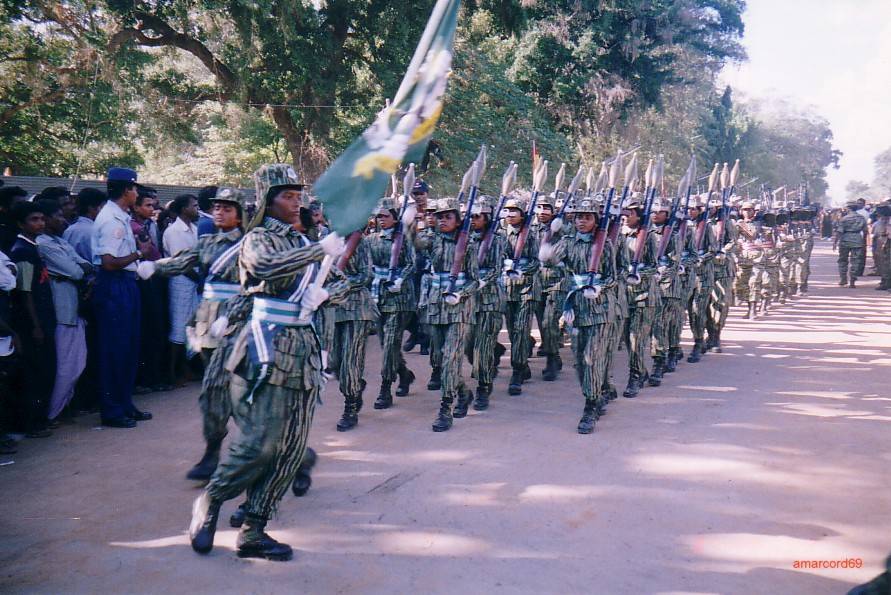 Wikimedia CommonsTamil Tigers on parade in Killinochchi in 2002.

Her courage made her a force to be reckoned with in journalism. It won her a Courage in Journalism award and three Foreign Reporter of the Year awards from the British Press. But it also cost her an eye.

In 2001, Colvin went on assignment in Sri Lanka in the midst of a civil war. She reported from inside of territory controlled by Tamil rebels to show the world how the citizens were starving. But on April 16 of that year, she paid a price for her bravery. While Colvin snuck through a cashew plantation led by the Tamil Tigers, the field lit up with flares, and Sri Lankan army patrolmen swept in. Colvin was trapped.

She held up her hands and yelled: “Journalist! American!” She hoped that, if they recognized she wasn’t a soldier, they’d let her go. That hope, though, was cut short in an instant as a grenade burst next to her, puncturing her lung and destroying her left eye.

The next thing she was a soldier tearing off her shirt and searching her body for weapons. “Admit that you came to kill us!” he yelled. Then he threw her broken body into the back of a truck.

Though Colvin survived, she would have to wear an eyepatch for the rest of her life. Her story shamed the Sri Lankan into opening up their restrictions on foreign journalists. It made her a hero to the Tamils, and she would later say: “So many Tamils have called me to offer me their eyes.”

But she was left with scars that cut deeper than skin. Colvin had PTSD.

“I know things I don’t want to know – like how small a body gets when it is burned to death,” Colvin told her sister during recovery. “I couldn’t feel anymore.” 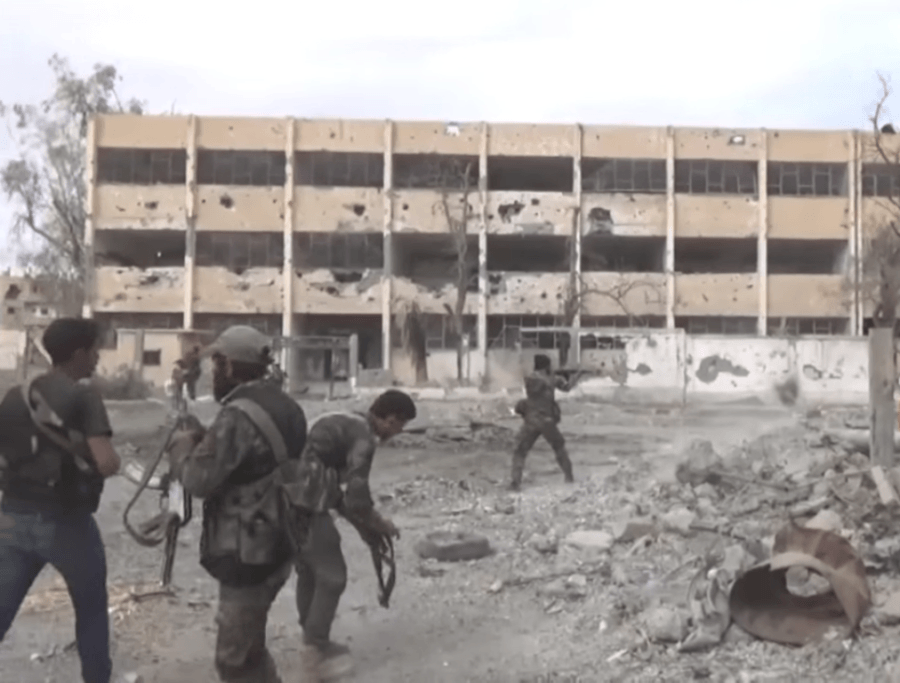 When Colvin was put back in the field more than a few accused the paper of risking their reporters’ lives in the pursuit of award-worthy news. “If The Sunday Times had not allowed Marie to continue the work she loved, it would have destroyed her,” Colvin’s executor, Jane Wellesley reported.

But when the news of the Arab Spring trickled in, Colvin wanted to be on the ground, in the Middle-East, gathering stories that no one else could cover. Though the job would eventually kill her, it would have also killed her not to do it.

She gave her last report on Feb. 21, 2012, from inside of the sieged city of Homs in Syria. She was with her photographer, Paul Conroy, who was a former soldier. He’d been in the Royal Artillery. He knew, by listening to the blasts overhead that Homs was being racked with 45 explosions every minute.

Colvin and Conroy had snuck into Homs through a great storm drain under the city and she relayed to the BBC and CNN the horrors she’d seen.

Conroy was the one was trained to go into war zones and was then also the first one who should have said when they should turn back. He told Colvin, “Every bone in my body is telling me not to do this.”

“Those are you your concerns. I’m going in, no matter what,” Colvin replied. “I’m the reporter, you’re the photographer. If you want, you can stay here.”

If he’d thought he had a chance of talking her out of it, Conroy says he would have done it. But this was Marie Colvin: the woman who’d given her eye to reporting on the Sri Lankan War; the journalist more at home in a war zone than on her own couch.

“You know I’ll never leave you,” Conroy said, and the two pushed forward.

“I saw a baby die today,” Colvin told the BBC while on the mission. “A two-year-old had been hit. His little tummy just kept heaving until he died.” She shared a video of the wounded and dying in the Homs hospital, and of the baby’s father shrieking in agony and frustration over the loss of his child.

Her editor, Sean Ryan, after watching the devastation around her in the clips she’d sent, became terrified for her life. He sent her a direct order telling her: “Leave tomorrow night.” 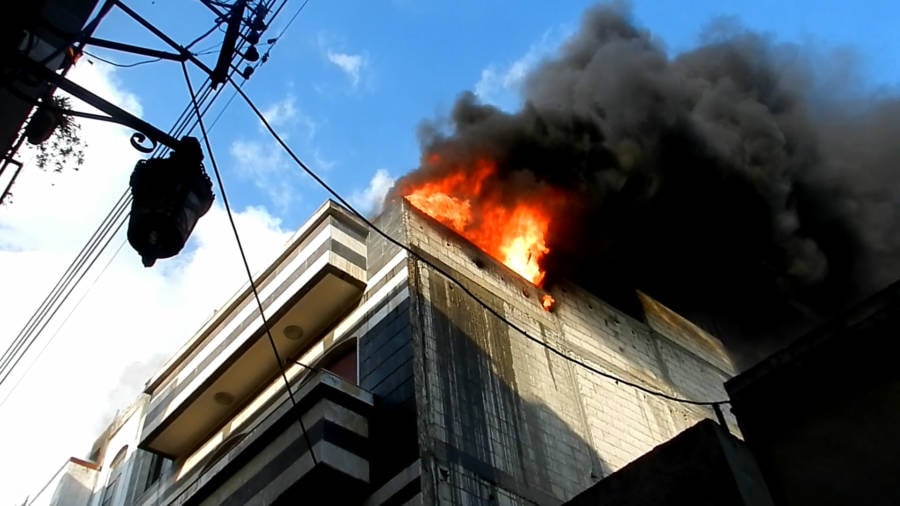 Wikimedia CommonsA building in Homs burns after being shelled by the Syrian Army, just days after a similar explosion killed Marie Colvin. February 25, 2012.

Paul Conroy was awoken the next morning by the sound of explosions. The walls of the makeshift media center they’d turned into their base shook.

Another blast went off and this one landed even closer to their base. Conroy realized then that they were being targeted. The Syrian army knew where he and Colvin were hiding, and they were trying to kill them.

The journalists inside scrambled to gather their things together and Colvin rushed to get on her shoes and Conroy gathered up his equipment. But before they could make it out, a shell burst through the door.

Conroy was further away from the wall. He felt a piece of shrapnel blast all the way through his leg and watched it fly out the other side. Then he collapsed to the ground.

He landed right next to Marie Colvin. She was already down, crushed under a pile of rubble, motionless.

He pushed himself through the pain to place his head on her chest, but there was nothing; no beating from her heart and no heat from her breath. She was already gone.

Free Syrian Army commanders helped Conroy get out and, for five days, he stayed in their care. Then they strapped him to the back of a motorcycle and helped him escaped Homs.

But Colvin was left behind, her body left to the Syrian government. And Conroy, still in convalescence from his wounds, had to read the lies in the paper.

Colvin, the Syrian government claimed, had been killed by terrorists. They said that an improvised explosive device filled with nails had been set off by the rebels and murdered her.

“It’s a war and she came illegally to Syria,” Syrian President Basah al-Assad said. “She’s responsible for everything that befell her.”

A Private War And Colvin’s Legacy 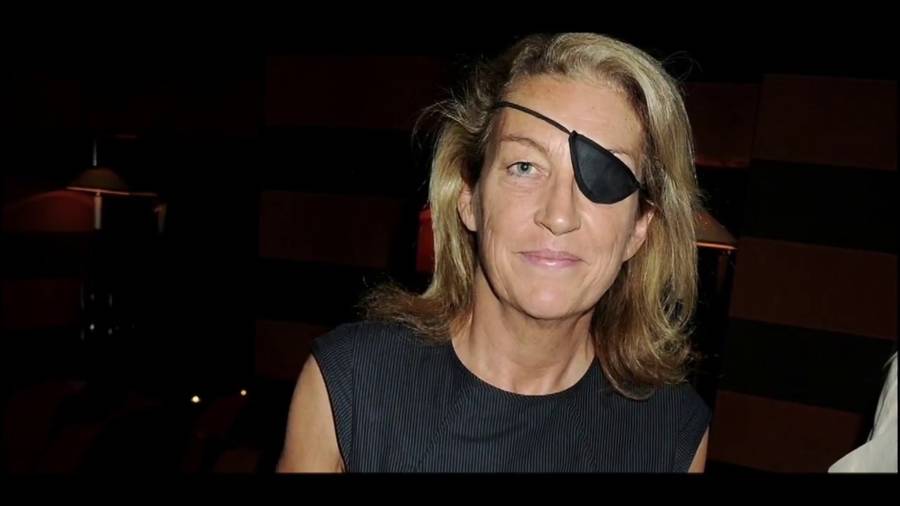 “Covering a war means going to places torn by chaos, destruction, and death, and trying to bear witness,” Marie Colvin told The Guardian in November 2010, a little over a year before her death. “It means trying to find the truth in a sandstorm of propaganda.”

It was what she’d tried to do in Homs. Though Colvin is gone others are spread her story. In 2018, two movies came out about Colvin’s life and death: one, a documentary called Under The Wire, and the other is a film called A Private War, which stars Rosamund Pike as Colvin.

It was the price she paid to shine a light on the darkest parts of the world. As Colvin famously said, as a reporter: “My job is to bear witness.”

After this look at Marie Colvin, learn about Paul Avery, the journalist taunted by the Zodiac Killer. Then, check out Kevin Carter, the photographer so torn up by his work that he took his own life.