Who Was Mark David Chapman, The Man Who Killed John Lennon?

A born-again Christian obsessed with "The Catcher In The Rye," Mark David Chapman killed John Lennon outside his Manhattan apartment on December 8, 1980.

On December 8, 1980, Mark David Chapman became forever infamous as the man who shot John Lennon. Although he was quickly arrested, John Lennon’s killer caused immeasurable pain for the former Beatle’s loved ones — and his millions of adoring fans.

In a painful twist of irony, Lennon had been enjoying his relatively quiet life in New York in the 1970s. Eager to escape the crazed mobs that plagued him in England, he moved into a historic apartment building called The Dakota with his wife, avant-garde artist Yoko Ono. And he liked the change of scenery.

“People come and ask for autographs, or say ‘Hi,’ but they don’t bug you,” Lennon told the BBC. 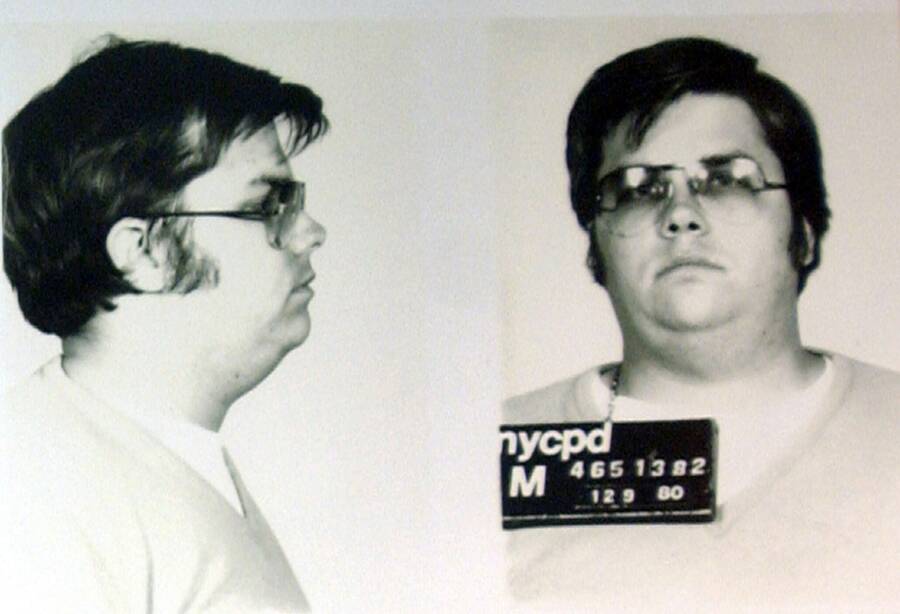 Public DomainAfter killing John Lennon in 1980, Mark David Chapman decided not to enter an insanity plea and pleaded guilty to the murder instead. Today, he expresses remorse for John Lennon’s death.

Little did Lennon know that one man who asked him for his autograph would turn out to be his murderer. On that fateful day in 1980, Mark David Chapman approached Lennon outside of his apartment and asked him to sign an album. Lennon obliged, thinking he was just another fan.

When Lennon returned home around 11 PM that same day, he didn’t know that Chapman would still be waiting for him. And this time, he wanted something far more sinister than an autograph. Before Lennon knew what was happening, Chapman fired four hollow-point bullets into his back. Lennon was rushed to the hospital, but he was dead on arrival.

Four decades after John Lennon’s death, questions about his killer and what motivated him remain the darkest — and most mysterious — parts of the former Beatle’s story. So who was Mark David Chapman and why did he become John Lennon’s killer? 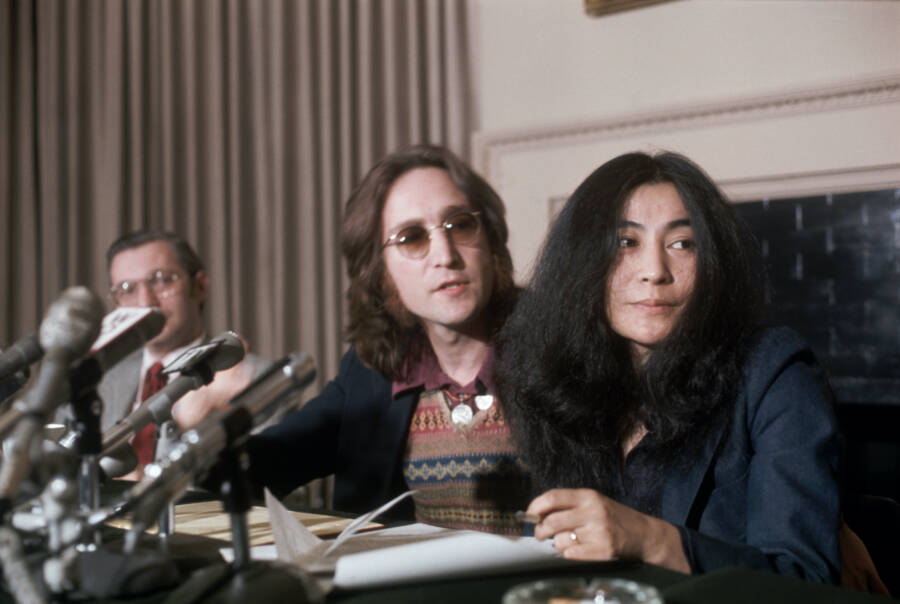 Mark David Chapman was born on May 10, 1955, in Fort Worth, Texas. His father, U.S. Air Force staff sergeant David Chapman, was physically abusive to his mother, who worked as a nurse.

In an interview with journalist James R. Gaines in People magazine, Chapman explained:

“He would beat her up. I’d wake up hearing my mother screaming my name, and it just scared the fire out of me, and I’d run in there and put up my fists and make him go away. Sometimes I think actually I pushed him away.”

In the months before Mark David Chapman shot Lennon, he had actually considered killing his father instead.

As Chapman put it: “I was going to fly to Atlanta and break into the house and go into [my father’s] room and put the gun up to him and tell him what I thought about him. And he was going to pay for what he was doing to my mother… I was going to blow his head off.”

But that plan never came to fruition. Neither did his plans of murdering other celebrities, including another former Beatle, Paul McCartney, Jacqueline Kennedy Onassis, Elizabeth Taylor, Johnny Carson, George C. Scott, and Ronald Reagan.

So what led Mark David Chapman to become the man who shot John Lennon? 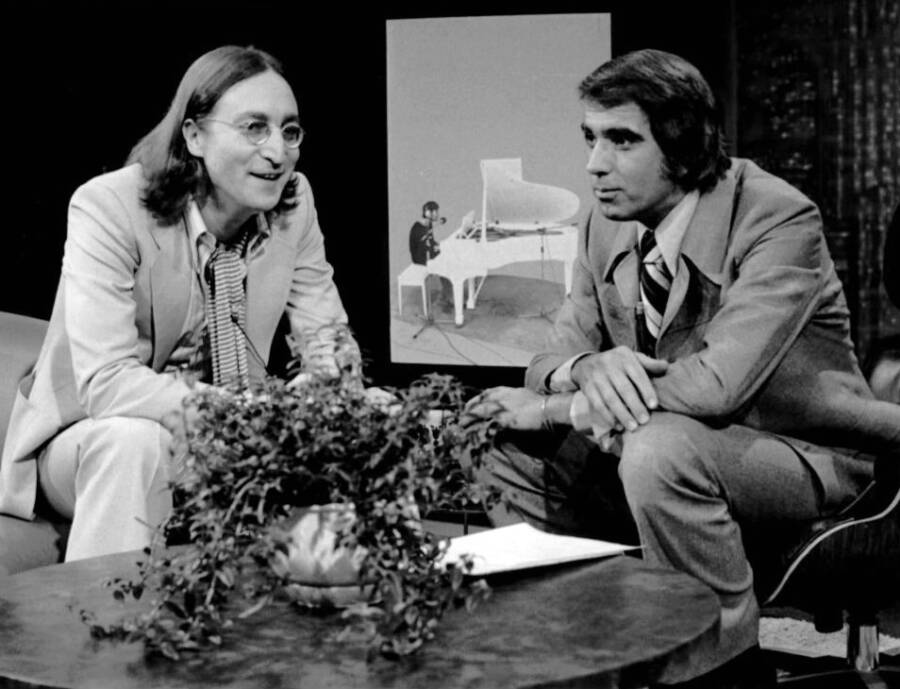 Wikimedia CommonsTom Snyder interviews John Lennon on Tomorrow in 1975 — the last time he was ever interviewed on TV.

When Chapman was just 14 years old, he had already started using drugs and regularly skipped school. He claimed that he was bullied by other children, and that’s why he had so many absences — including a two-week period when he lived on the streets of Atlanta.

Oddly enough, the man who shot John Lennon had always been a Beatles fan — and even once told a friend after a prolonged LSD trip that he believed he had become Lennon.

But a 1966 interview with the London Evening Standard, in which Lennon proclaimed his group had become “more popular than Jesus,” soured Chapman’s adoration of Lennon. High school friend Miles McManus recalled Chapman changing the words of “Imagine” to “Imagine if John were dead.”

After becoming a born-again Presbyterian in 1971 and working as a summer camp counselor in Georgia, Chapman read J.D. Salinger’s The Catcher in the Rye. He felt particularly drawn to the novel’s protagonist, Holden Caulfield.

“I really identified with him,” Chapman told Gaines during a visit to Attica Correctional Facility three years after John Lennon’s death. “His plight, his loneliness, his alienation from society.”

In 1977, Chapman moved to Hawaii and eventually slipped into a deep depression. This would lead to a failed suicide attempt before Chapman met Gloria Abe, a travel agent whom he married two years later.

Gaines claimed that after Chapman read Anthony Fawcett’s John Lennon: One Day at a Time in 1980, Chapman’s “10-year obsession with The Beatles congealed into a hatred of John Lennon in particular.”

Mark David Chapman believed that Lennon was “a poser” who “espoused virtues and ideals that he didn’t practice.” By October, Chapman had quit his job as a security guard, signing out as John Lennon on his final day. Then, he prepared to take a fateful trip to New York City.

The Night Of John Lennon’s Death 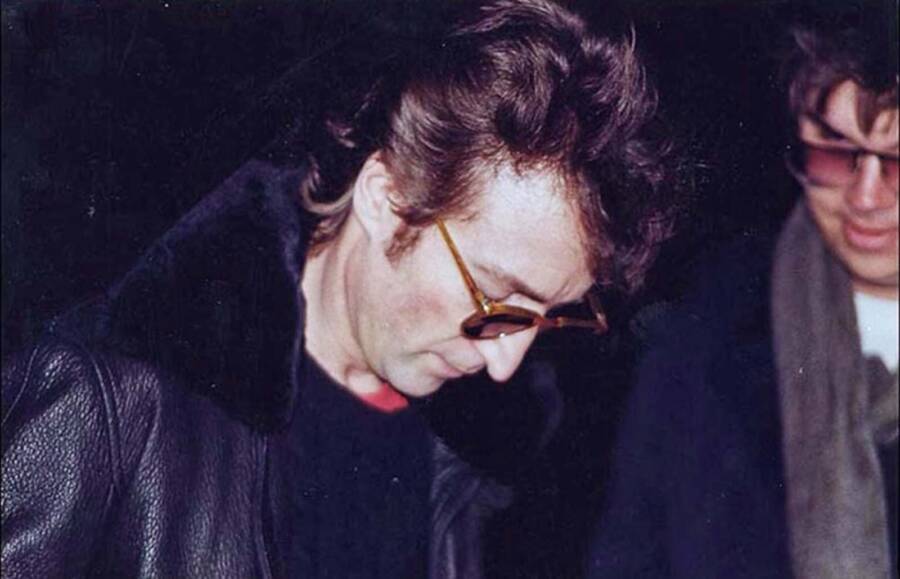 Paul GoreshJohn Lennon signs an autograph for his killer mere hours before his death.

On December 8, 1980, the 25-year-old Chapman left his hotel and bought a copy of Salinger’s novel. In the book, he wrote, “This is my statement.” He signed it “Holden Caulfield” before heading to The Dakota and waiting at its entrance all day. At 5 p.m., Lennon and Ono walked out, and Chapman asked for an autograph.

“He was very kind to me,” said Chapman. “Ironically, very kind and was very patient with me. The limousine was waiting… and he took his time with me and he got the pen going and he signed my album. He asked me if I needed anything else. I said, ‘No. No sir.’ And he walked away. Very cordial and decent man.”

When the couple returned around 10:50 p.m., Dakota doorman Jose Perdomo saw Mark David Chapman standing near the archway in the shadows. 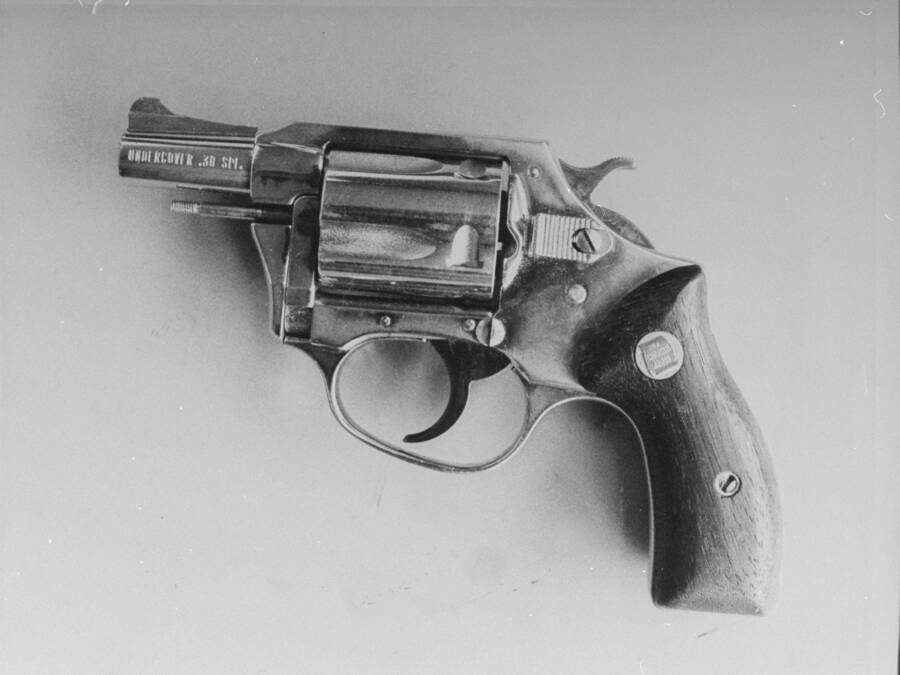 Chapman fired five shots from his Charter Arms .38 Special revolver, with one missing and hitting a window. The rest hit Lennon in the back and shoulder, puncturing both his subclavian artery and lung. Lennon staggered to the reception area in shock, screaming, “I’m shot!”

“I was frozen, standing there frozen and the gun was hanging at my side, still in my hand,” Chapman said, until Perdomo made a move. “He shook the gun out of my hand and he kicked the gun across the pavement. He shook me out of my shock.”

Though fully aware of what he’d done, the man who shot John Lennon peacefully waited at the scene until officers arrested him. His lawyers immediately planned on an insanity defense and transferred him to Bellevue Hospital to be examined by psychiatrists from both sides of the upcoming trial.

Inside The Mind Of The Man Who Killed John Lennon 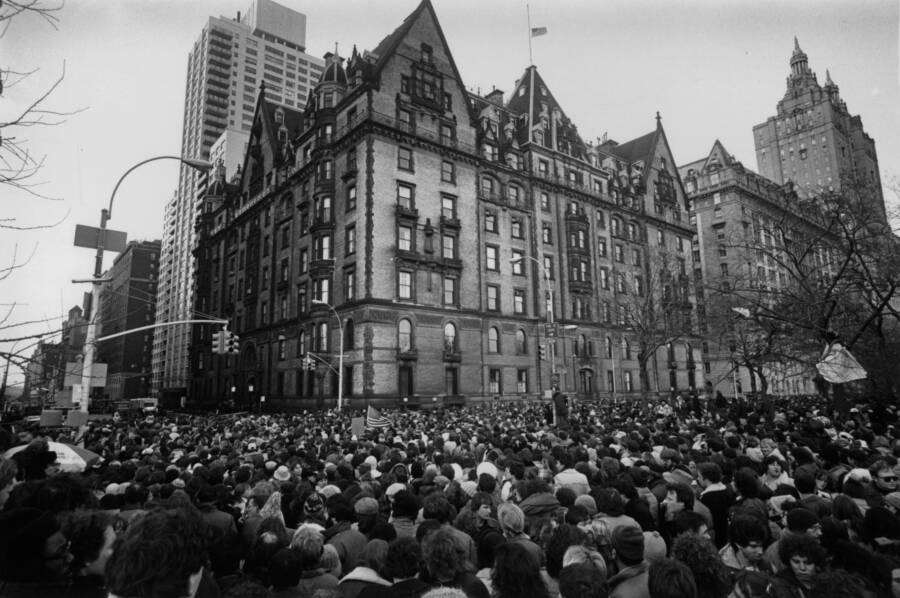 Keystone/Getty ImagesThe first group of mourners gather outside The Dakota after hearing the tragic news of John Lennon’s death.

The prosecution would claim that Chapman had “committed a deliberate, premeditated execution of John Lennon and acted in a cool, calm and calculated manner.”

Though the defense maintained that John Lennon’s killer was “delusional and psychotic,” Chapman himself said he rejected this — and didn’t commit the murder “by reason of mental disease or defect.”

When asked why he had used hollow-point bullets in the crime, he simply said, “To ensure Lennon’s death.”

Chapman told Allen F. Sullivan of the Manhattan District Attorney’s office that he heard voices telling him to kill Lennon — and that it was both his and God’s will. 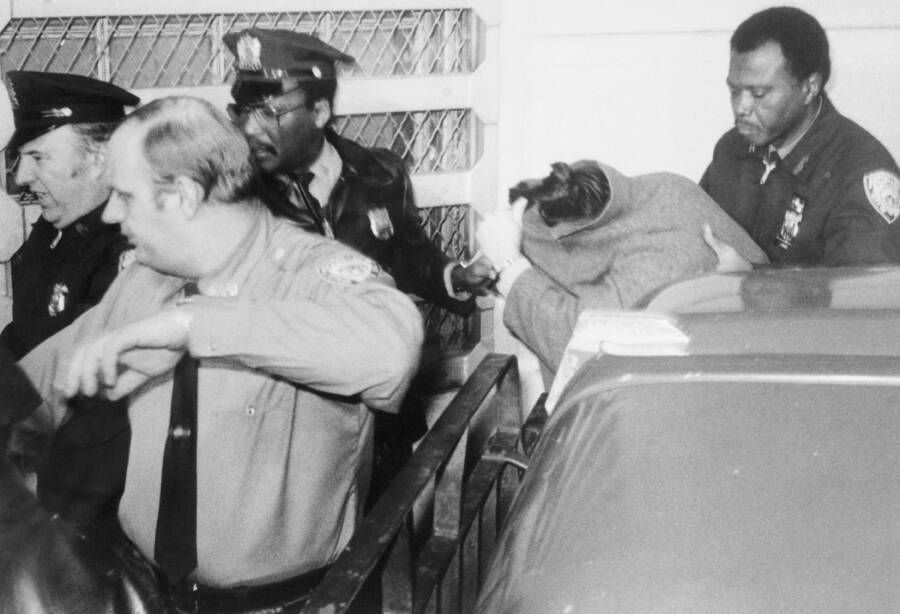 Bettmann/Getty ImagesMark David Chapman hides his face as police escort him back to Bellevue Hospital following a court appearance.

Though experts concluded in the months preceding the trial that Chapman was either psychotic, a paranoid schizophrenic, or both, he was deemed competent to stand trial. In the end, Chapman overruled his own attorneys and decided to plead guilty and forego the insanity plea.

John Lennon’s killer was sentenced to 20 years to life on August 24, 1981. After he was put behind bars, the man who shot John Lennon reassessed his horrific crime — and expressed regret for John Lennon’s death.

Where Is Mark David Chapman Today

Today, Chapman is serving out his sentence at Wende Correctional Facility in Alden, New York.

He was denied parole for the 11th time in August 2020. For every parole hearing, Yoko Ono has sent a personal letter urging the board to keep John Lennon’s killer behind bars.

His first attempt at parole in 2000 was denied partly because the board believed Chapman had a continued interest in “maintaining [his] notoriety.” 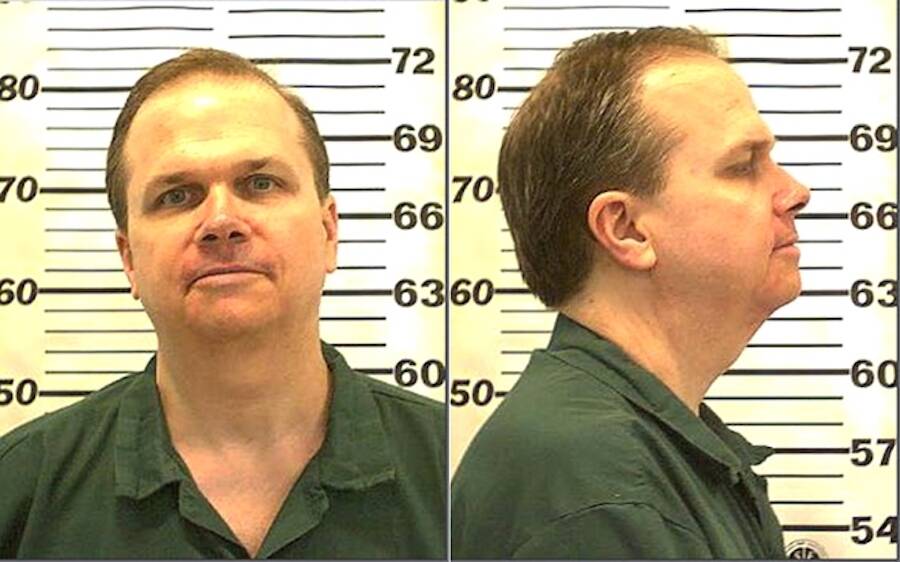 Public DomainMark David Chapman circa 2010. His 11th parole hearing was denied in August 2020.

After all, Chapman had previously claimed that he murdered Lennon for notoriety. And in 2010, he said, “I felt that by killing John Lennon I would become somebody, and instead of that I became a murderer, and murderers are not somebodies.” He also said that he chose Lennon because “he seemed more accessible to me” than other stars.

It was in 2014 that Mark David Chapman told a parole board, “I am sorry for being such an idiot and choosing the wrong way for glory,” and that Jesus “has forgiven me.” Unmoved, the board maintained that Chapman wouldn’t be able to “remain at liberty without again violating the law.” 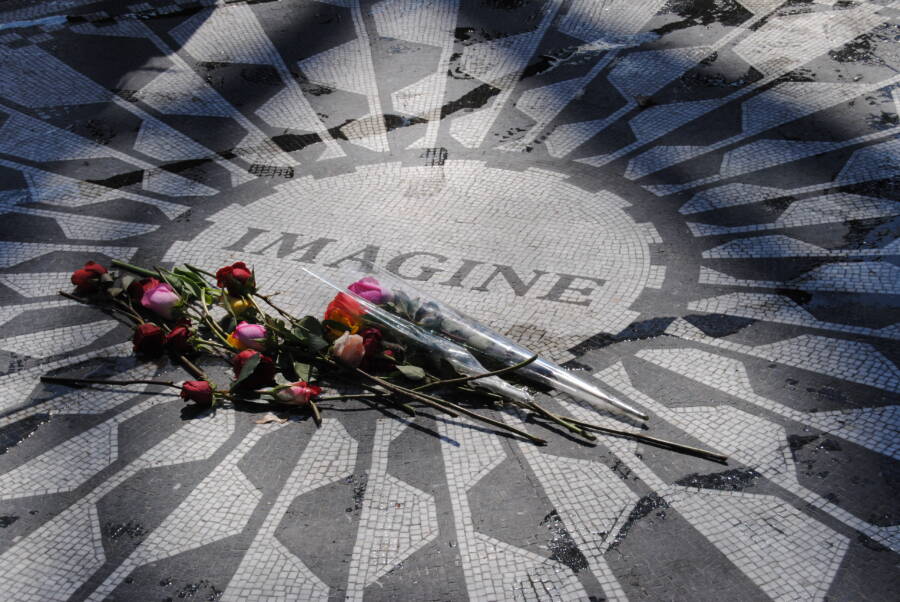 Wikimedia CommonsRoses are placed in Strawberry Fields, a Central Park memorial dedicated to John Lennon in 1985.

The man who shot John Lennon has since described his actions as “premeditated, selfish, and evil.”

“I was too far in,” recalled Mark David Chapman during his 2018 parole hearing. “I do remember having the thought of, hey, you have got the album now, look at this, he signed it, just go home, but there was no way I was going to go home.”