Researchers used 200-year-old records to uncover the Colosseum-like arena where gladiators and animals fought to the death in the ancient town of Mastaura in western Turkey. 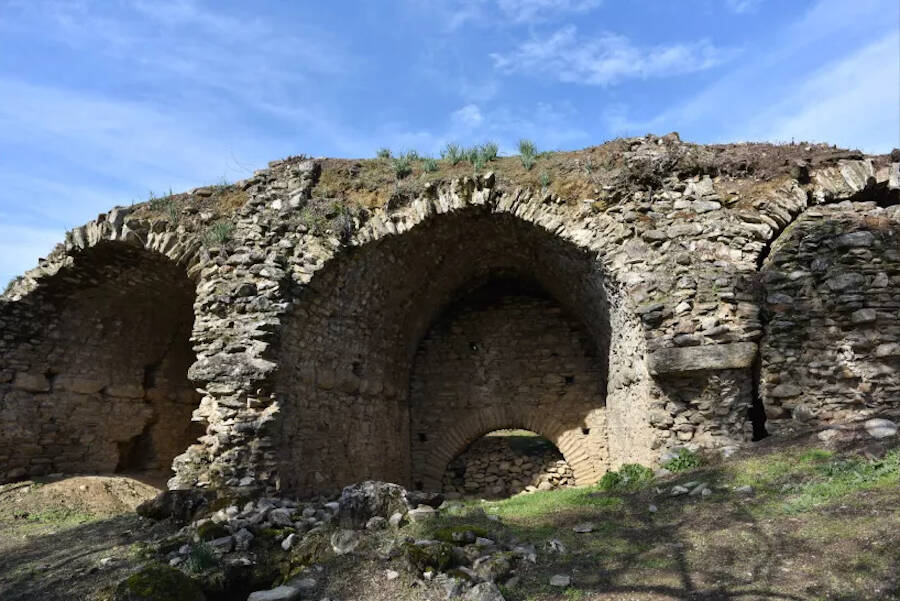 Turkey Culture and TourismThe arena is estimated to have held between 15,000 and 20,000 people.

Archaeologists have just uncovered a rare piece of Roman-era history in the ancient town of Mastaura in western Turkey: a nearly perfectly-preserved gladiator arena that could seat upwards of 20,000 cheering fans.

The amphitheater dates to around 200 A.D., during the reign of the Severan dynasty, a time when this region was rapidly expanding and increasing its wealth and status.

According to LiveScience, this arena was formerly the site of brutal gladiatorial matches which saw men pitted against wild animals in fights to the death. Hidden by centuries of overgrowth and natural reclamation, it was only revealed by stonework rising from the ground. Remarkably, that’s what prevented it from ruin.

“The preservation was maintained as it was buried for years,” said excavation leader Sedat Akkurnaz, an archaeologist at Adnan Menderes University, and Mehmet Umut Tuncer, head of the Directorate of Culture and Tourism in Aydın, the province where the arena was discovered.

“People from neighboring cities were coming to Mastaura town to watch the big events in this building, specially designed for bloody shows.” 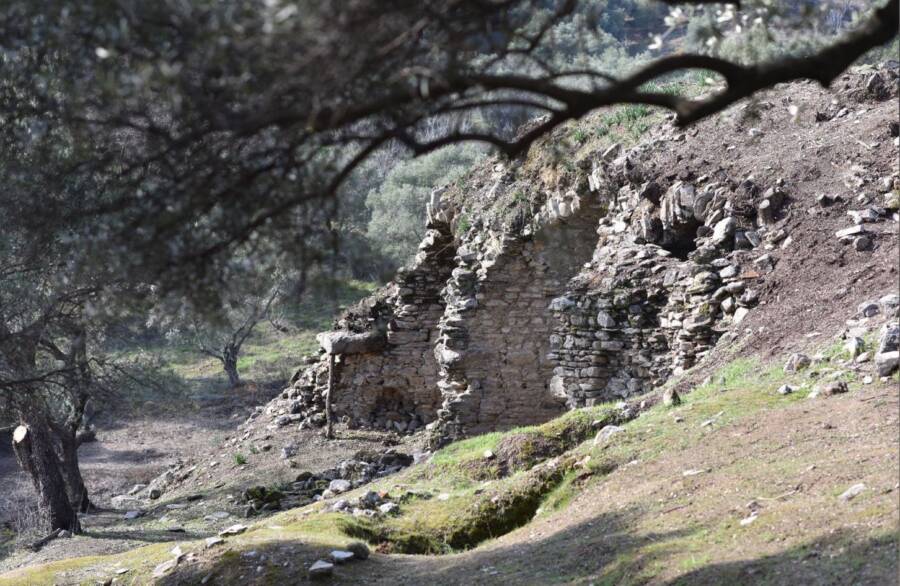 Turkey Culture and TourismMany of the seating areas, as well as waiting rooms for gladiators, remained intact.

In order to find the arena, the team used written records of people visiting the region over 200 years ago to find the site.

“When European travelers came to visit Anatolia in the 18th century, they also visited Mastaura and shared information about it,” said Akkurnaz. “When we examined the notes of those travelers, we saw that they gave very interesting information about Mastaura.”

The Turkish Ministry of Culture and Tourism cleared the archaeologists to begin work in August 2020. They found the site obscured by nearly two millennia of “shrubs and trees,” Akkurnaz and Tuncer said, almost as if it was a natural hill in the rolling landscape.

It was only after cutting down all of that down from October to December that they began to realize what they had found. The archaeologists soon dated the arena to the Severan Dynasty, which spanned five emperors from 193 to 235 A.D.

As evidenced by the arena’s remarkable masonry and stonework, it was clear that the Romans not only spurred Mastaura’s economic development, but built an arena people flocked to. 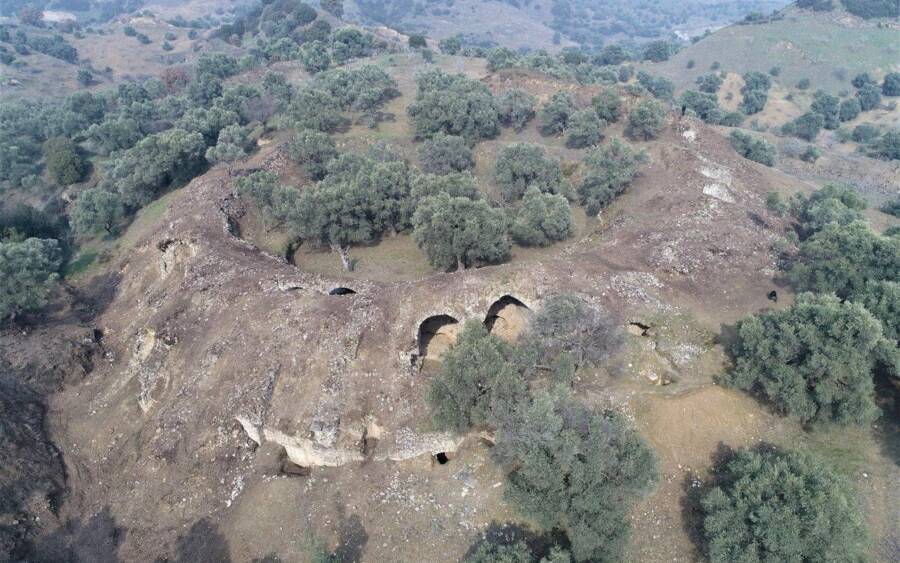 Turkey Culture and TourismSituated in an earthquake zone, Mastaura was built over by numerous cultures for centuries, though the amphitheater remained intact.

“During this dynasty, the city of Mastaura was very developed and rich,” the researchers said. “There is great increase and variety of Mastaura coins during this period.”

Researchers also noted many similarities to the Colosseum in Rome, which was built in 70 A.D. and was about twice the size of the amphitheater in Mastaura. While there are other Roman gladiator arenas that have been uncovered in Turkey, none is as well-preserved as this one, which still maintains its complete circular shape.

The interior arena measures 131 feet by 98 feet, with an overall diameter of more than 300 feet, and includes rows of seats, waiting rooms for gladiators, and even private entertainment rooms for elite fans.

“This might be the only arena preserved in its entirety here in Turkey,” said Tuncer. 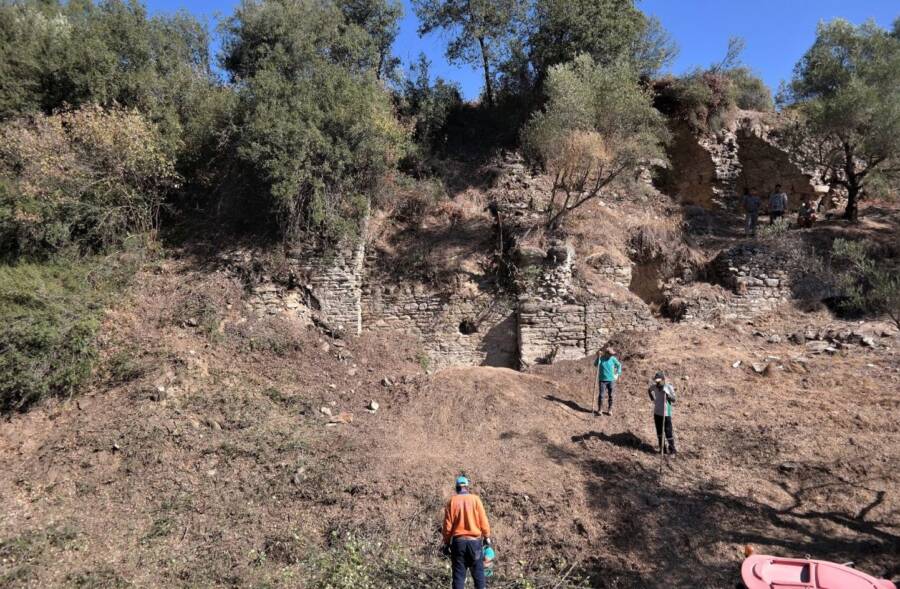 Turkey Culture and TourismThe team is now preserving the site and conducting 3D scans of the structure.

But the region of Mastaura is a known earthquake zone, and archaeologists estimate that about 80 percent of the city has been buried over time. Notably, the team also discovered a mill, a grave, and the remains of four cisterns in the area.

Akkurnaz explained that he and his colleagues are confident that there are several settlements yet to be found, and that Mastaura served as the epicenter of surrounding rural villages. The arena, meanwhile, remained intact.

“It is solid, as if it was just built,” said Akkurnaz and Tuncer, including “some of the rows of seats, the arena where gladiators fought and the supporting walls outside the building.”

It was here, within the arena, that spectators from around the region sat in seats up to 82 feet high — and bet their wealth on bloody battles that saw gladiators killed and wild animals roar.

Ultimately, archaeologists hope to fix cracks in the walls of the building in order to perform further excavations and plan to laser scan the entire structure to create a 3D image of the arena in order to “understand what the underground parts of the building are like.”

They are now working with the Aydin Archaeological Museum and the Nazilli Municipality to preserve the structure and expect work to conclude by May 2022.

After reading about the 1,800-year-old Roman amphitheater unearthed in Turkey, learn 33 Ancient Rome facts that will change the way you see history. Then, read about Gobekli Tepe, the oldest temple in the world.