At just 20, Matthäus Hetzenauer became the most successful snipers in the Third Reich — and one of the most decorated.

From 1943 to 1945, Matthäus Hetzenauer terrorized Soviet troops on the Eastern Front with his keen eye. He personally shot and killed 345 men, though Hetzenauer’s biographer believes the kill count could even have been twice that.

The decorated sniper was wounded and captured all before his 30s, but he persisted in becoming one of the deadliest snipers in all of Germany.

Matthäus Hetzenauer grew up in an alpine region of Austria. The wide-open sky, long sight distances, and solitude of the Alps, perhaps, lent well to his profession in the German army during World War II.

He was born on Dec. 23, 1924, in Brixen im Thale, Austria to a peasant family. The rural village is in the northern part of the country near the German border. Nearby are some of the best ski runs in the Alps. Simon Hetzenauer, the sniper’s father, and his wife, Magdalena, lived off the land as best they could. Simon was an excellent hunter. His sharpshooting skills brought deer, moose, and turkey meat to the family.

Young Matthäus was a quick study in his father’s techniques to kill prey. Indeed, sharpshooting was in his blood as his uncle Josef was a veteran of the Austro-Hungarian Army and he kept his medals, including an Iron Cross, on display for the youngster to admire.

Through hunting, Matthäus Hetzenauer learned the art of camouflage, a skill that would be integral in his sniper training. He learned to be deliberate and exacting. The youngster also had to cover ground and terrain quickly if his initial shot didn’t fell the target. This skill was extremely important if he needed to escape an enemy in a pinch.

At the age of 17, Matthäus Hetzenauer was drafted into the German army. He was assigned to the 140th Mountain Rifle Reinforcement Battalion at Kufstein in his native Austria. The fortifications here not only backed up operations along the Eastern Front but also served as a defensive outpost against incoming enemy attacks along Germany’s southern border. 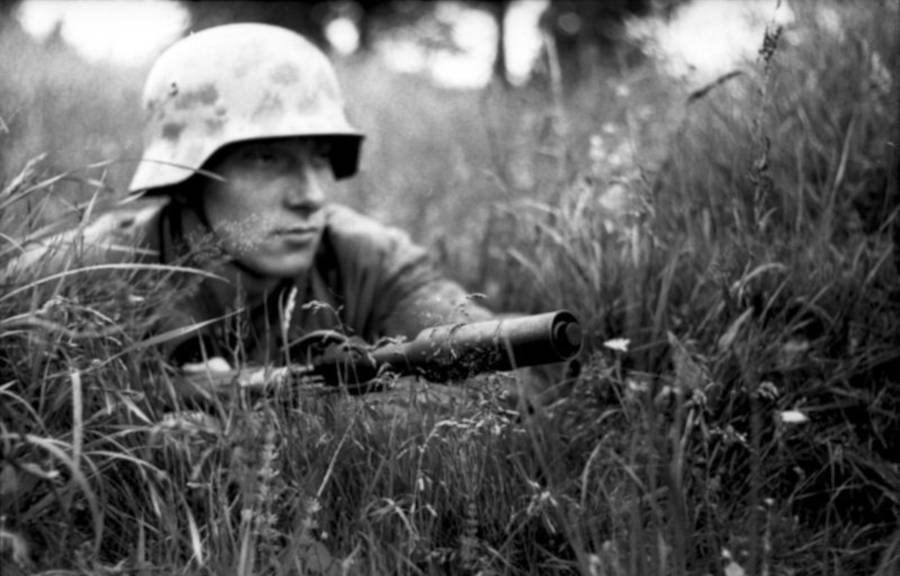 Wikimedia Commons A German sniper scouting the area ahead of him.

The young man changed units in January 1943 to receive training on mortars and artillery. He trained as a mountain infantryman for two years, a duty to which Hetzenauer was well-suited. But during his training, Hetzenauer’s commanders noticed his aptitude for marksmanship, and so from March to July of 1944, the soldier trained as a sniper.

The sniper relied on two rifle models for his deadly work. Hetzenauer always carried his Karabiner 98k sniper variant with 6x telescopic sight and a Gewehr 43 with ZF4 4x telescopic sight, and with these tools, became one of the deadliest snipers to come out of World War II.

These weapons became out of the necessity of their trade an extension of the sniper’s own arms and eyes. The German army deployed Hetzenauer to Carpathia, Hungary, and Slovakia where he saw action in Carpathia as early as August of 1944.

The Germans needed to disrupt the advancing battalions of the Soviets as much as possible on this front, and so Hetzenauer went to work. His job was to defend the mountain artillery units from Soviet snipers and machine guns. It was a daily chore, as the mountain brigades suffered near-constant barrages from Soviet guns.

The youngster preferred to shoot Soviet unit commanders and machine gunners. He would often work bravely through an enemy line, shooting specific targets, just to get to the commanding officer. 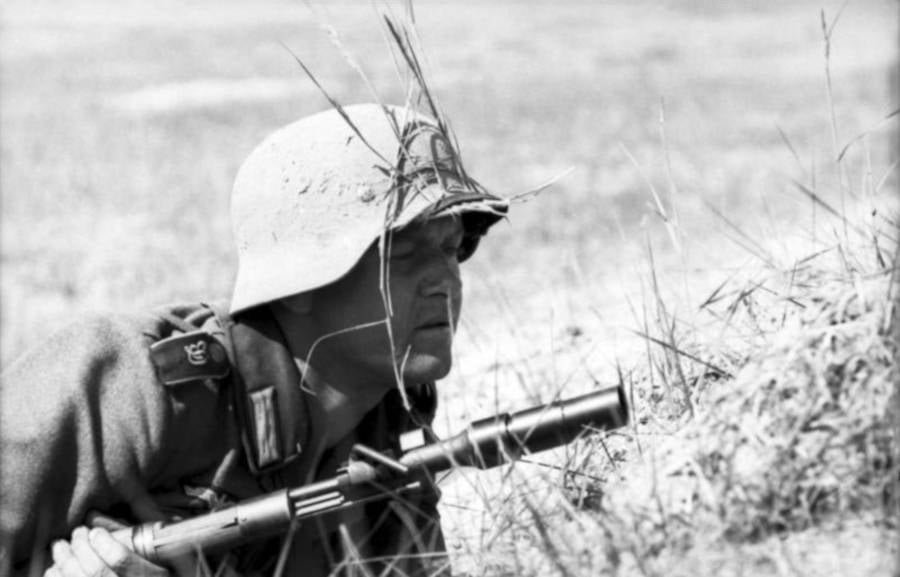 Wikimedia Commons A German sniper with a camouflaged helmet.

It was a game of sniper-chess. Hetzenauer routinely killed pawns to get to the king. It was a matter of necessity on the front lines. The sniper said, “I had to shoot at the enemy’s commanders and gunners because our own forces would have been too weak in number and ammunition without this support.”

Hetzenauer sometimes waited for hours in the cold and snow before firing off a single shot. He was patient, knowing that a single false movement would give away his position and end in certain death at the hands of a Soviet sniper.

The longest purported kill made by the sniper was 1,200 yards. That’s 10 football fields long.

From August of 1944 to May of 1945, Hetzenauer made a total of 345 confirmed kills. That’s more than one death per day. Soviet snipers had higher kill counts, but Hetzenauer’s body count was a record among German troops, and all of his kills happened in just 10 months. 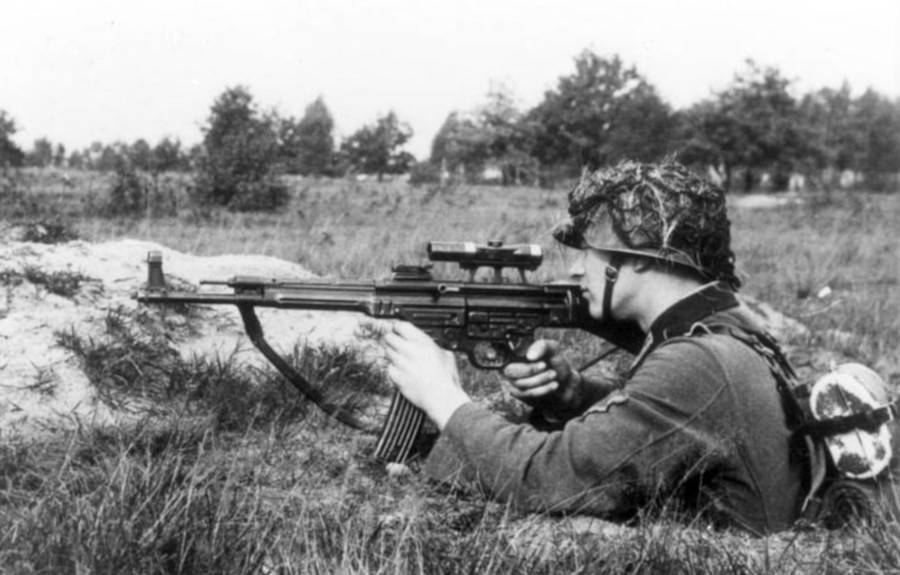 Wikimedia Commons A German sniper preparing to take out a target.

The deadliest Nazi sniper of World War II was highly decorated for his efforts. He received the Iron Cross First and Second Class for because of his numerous sniper kills and lack of fear for his own safety under artillery fire and enemy attacks, the Sniper Badge in Gold which he alone was awarded, the Close Combat Bar in Gold, the Infantry Assault Badge in Silver, the Black Wound Badge, and the German Cross in Gold.

In November 1944, in his early 20s, Hetzenauer suffered a head wound from artillery fire. He would receive a badge of honor for this, as he was wounded a couple more times towards the end of the war. Part of Hetzenauer’s job was to cover his unit’s retreat from Soviet forces, but his skill and luck ran out in May of 1945 when Soviet forces captured him.

Life as a prisoner wasn’t pleasant. any of his fellows were tortured and killed. Of the 3 million German soldiers captured by the Soviets, nearly 1 million of them wound up dead. He spent five years in a Soviet prison camp where he was a survivor and a fighter and was released in 1950.

Matthäus Hetzenauer returned home where he became a carpenter. He married Maria, who outlived him by two years. He ultimately died in 2004 at the age of 79 after several years of deteriorating health.