Archaeologists In Greece Unearth A 2,100-Year-Old Skeleton Buried On A Bronze Bed Decorated With Mermaids

The bed dates to the first century B.C.E. and was discovered alongside the remains of a wealthy woman who likely held a high position in ancient Greek society. 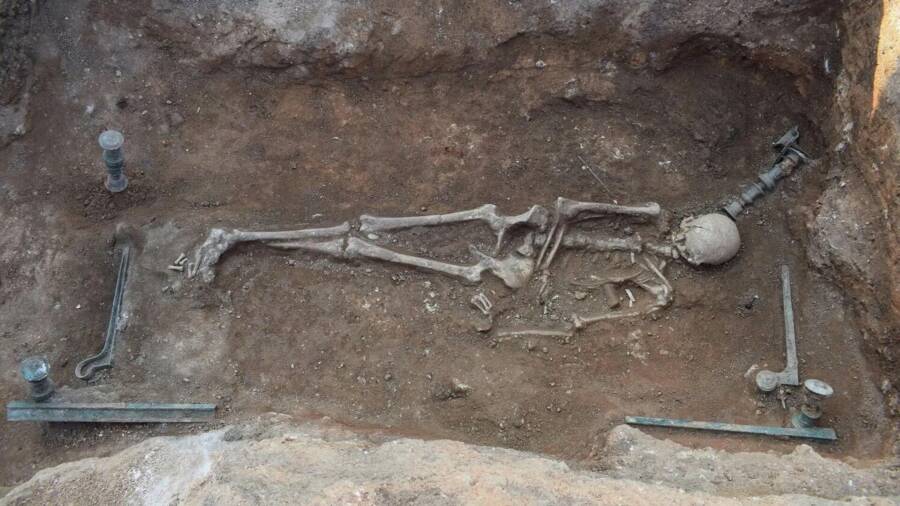 Areti Chondrogianni-MetokiThe remains were found in the northern Greek city of Kozani.

Archaeologists in Greece recently made the find of a lifetime when they unearthed the skeleton of a woman in a rare funerary bed in Kozani, near the ancient city of Mavropigi. The elaborate bronze bed, which dates to the first century B.C.E., suggests the remains belonged to someone with high standing in the community — perhaps even royalty.

The surrounding area in West Macedonia has been continually inhabited since 6500 B.C.E. But 2,100 years ago, when this mysterious woman was buried, big changes were taking place in Greece. Roman influence was growing. In 48 B.C.E., Julius Caesar defeated Pompey’s armies at the Battle of Pharsalus to become the leader of Rome — and he soon turned his eyes toward Greece.

Whether or not the recently unearthed woman was alive during the country’s political changes is unclear, but considering her seemingly important role in society, it’s likely she at least would have been aware of the major events as they unfolded.

The woman’s funerary bed itself is remarkably intact, though the wooden portions have decomposed over the centuries. The bronze posts are covered in depictions of mermaids, which were well-established in Greek lore by the first century B.C.E.

According to Greek Reporter, the first known tales of mermaids date to Assyria in 1000 B.C.E. The goddess Atargatis was said to have fallen in love with a mortal man, but she accidentally killed him. Out of shame, she jumped into a lake, where she turned into a fish from the waist down.

In ancient Greek mythology, Sirens were half-woman, half-bird creatures who sat on rocky seashores and sang beautiful songs to lure in sailors, causing shipwrecks. They most famously appear in Homer’s Odyssey, when the sorceress Circe warns Odysseus that he must resist their song.

As the story goes, Odysseus ordered his crew to tie him to the ship’s mast and plug their own ears with beeswax. As they traveled past the Sirens, Odysseus heard their song and begged his crew to untie him, but they ignored him as ordered and continued safely past the perilous shore.

By the turn of the millennium, though, Greek depictions of mermaids had come closer to the beautiful, fish-tailed women they’re known as today. 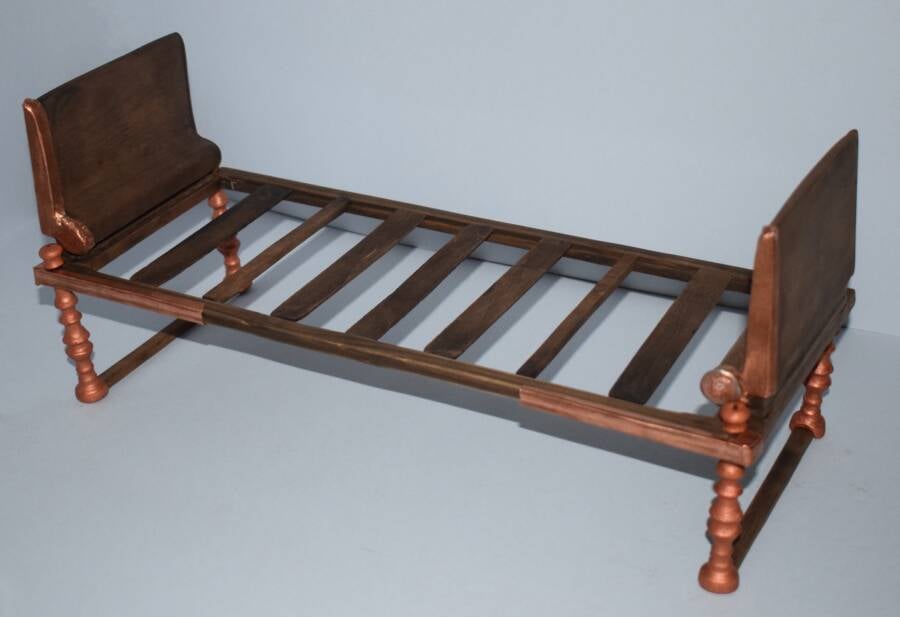 In addition to the mermaids, the 2,100-year-old bed contains a bronze engraving of a bird with a snake in its mouth, which was a symbol of Apollo, the ancient Greek god of music, prophecy, and healing. Areti Chondrogianni-Metoki, the director of the Ephorate of Antiquities of Kozani, told Live Science, “We do not know much about the history of this area,” but it is clear that there was a sanctuary dedicated to Apollo in nearby Mavropigi.

Thus, Chondrogianni-Metoki believes that the deceased may have had a connection to the cult of Apollo.

Other signs on this recently-discovered skeleton, however, suggest additional possibilities. While scientists are still working to determine how old the woman was and how she died, they do know she had a high social and political position in society, as she was buried alone.

There were gold threads on her hands, likely from embroidery, and her head was covered in gold laurel leaves that were part of a wreath she was wearing when she was laid to rest. In addition to the funerary bed, archaeologists found four clay pots and a glass vessel buried alongside her.

Chondrogianni-Metoki previously told Ekathimerini, “Bed burials were common practice in Hellenistic times.” But the bronze funerary bed is the first of its kind to be found, so it’s evident that this woman was special.

Whether these newly-discovered remains are those of a royal family member or a high priestess is yet to be determined, but archaeologists are eager to learn as much as they can about this exceedingly rare find.

After reading about the bronze funerary bed unearthed in Greece, read about the Greek farmer who stumbled upon a 3,400-year-old Minoan tomb in his olive grove. Then, go inside these stories of mermaid sightings throughout the centuries.

Cara Johnson
A writer and editor based in Charleston, South Carolina, Cara Johnson holds a B.A. from Washington & Lee University and an M.A. from College of Charleston and has written for publications ranging from wedding magazines to coffee blogs.
You might also like
×
Follow hu On