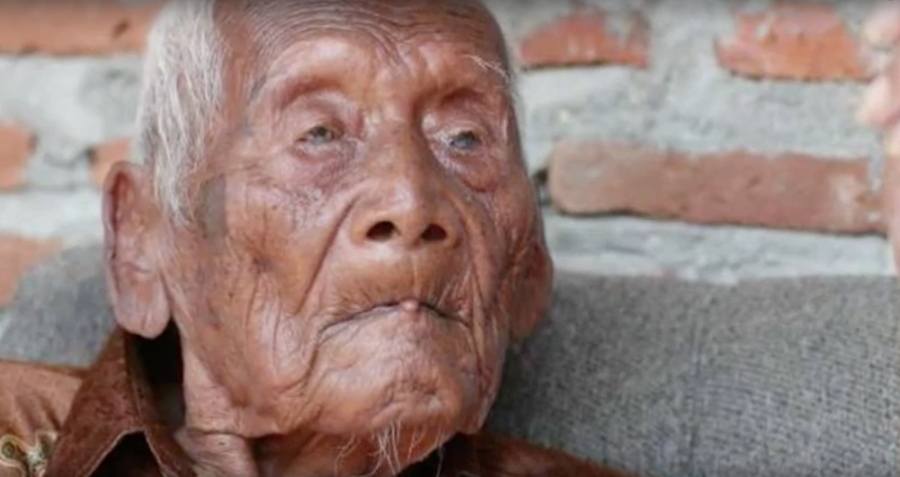 Mbah Gotho, a reportedly 145-year-old man from Central Java, Indonesia, is now making headlines after telling a regional news outlet, “What I want is to die.”

Over the past three months, Gotho says, his health has deteriorated to new lows, leaving him unable to bathe and feed himself. With his eyesight effectively long gone, Gotho now says he mostly spends his days listening to the radio.

While Gotho says his health has gotten even worse in recent months, he’s understandably been preparing for death for some time now. All the way back in 1992, when he was 122, he even purchased a gravestone near those of his children — all of which he has outlived, along with his four siblings and ten wives.

Before Mbah Gotho joins the departed, however, there remains one big issue: Is he actually the world’s oldest person?

Up until a few days ago, when Gotho made headlines with his public wish to now die, local media — with very infrequent coverage from international outlets — had long been alleging that Gotho was the world’s oldest person. And in 2014, local Indonesian authorities issued him an ID card with his supposed birth date: December 31, 1870.

However, neither Guinness nor any other similar body will officially recognize Gotho’s claim without independent, third-party verification from an international source, as is customary in these situations.

Joining Gotho among those who’ve made extraordinary claims without independent verification are James Olofintuyi of Nigeria, allegedly 171, and Dhaqabo Ebba of Ethiopia, allegedly 163.

For now, though, Gotho — along with Olofintuyi, Ebba, and all others lacking independent verification — sit behind France’s Jeanne Calment, who died at 122 in 1997, in the record books.

And as for the oldest living person whose age can be verified, the death of America’s Susannah Mushatt Jones at 116 earlier this year, left Italy’s Emma Morano, also 116 yet slightly younger, with the title.

But if Mbah Gotho’s claim gets verified — and if he stays alive, despite his wish — Morano’s title could soon be blown out of the water by a whopping 29 years.

Next, read up on the recent revelations that one infamous tech billionaire seeks to inject himself with young people’s blood in order to fight aging. Then, check out the anti-aging pill that could double the human lifespan.