Born into slavery and then sold into the circus, Millie and Christine McKoy ultimately took back their own destiny. 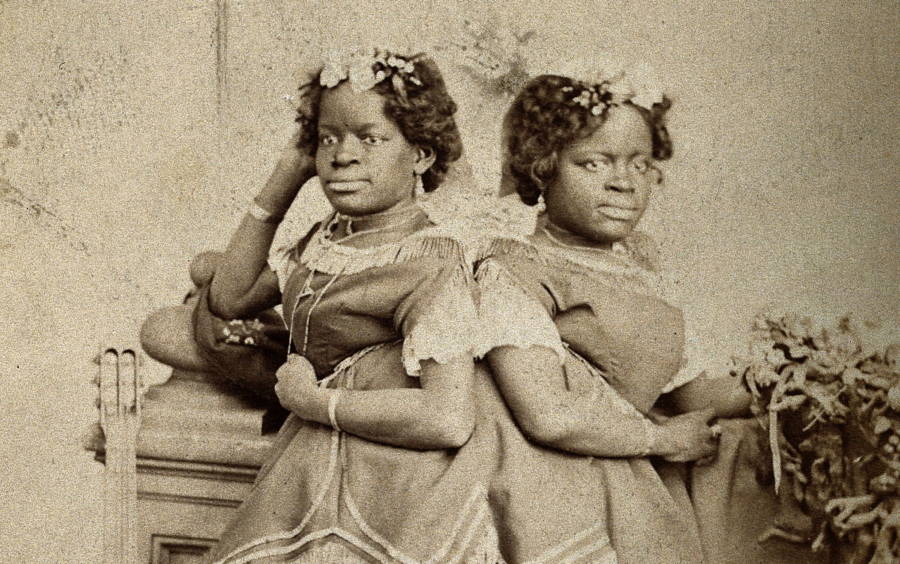 Known by many as “The Carolina Twins,” “The Two-Headed Girl,” and “The Two-Headed Nightingale,” conjoined twins and former slaves Millie and Christine McCoy became stars on the 19th-century circus circuit both in the U.S. and overseas before ultimately perishing in obscurity and being buried in an unmarked grave.

Their story begins in Welches Creek, North Carolina on July 11, 1851, Millie and Christine were born into slavery, the daughters of Jacob and Monemia, slaves owned by local farmer Jabez McKay. Connected at the spine, the twins were “… united at the lateral, posterior portion of the pelvis, the sacrum and the coccyx joined, the lower part of the spinal cord united,” according to a medical report by Edinburgh, Scotland physician and the inventor of chloroform, Dr. James Simpson.

Born at a combined weight of 17 pounds (Christine weighing 12, Millie a much smaller five) each sister had two arms and two legs of her own. Nevertheless, they often referred to themselves as a singular person, Millie-Christine, as did close members of their family. 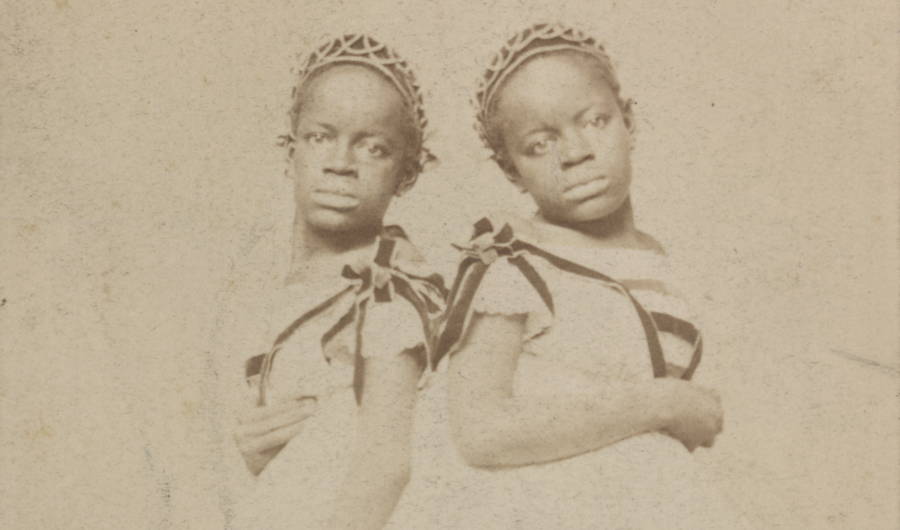 Attracting attention from locals right away, the McCoy twins were taken from their parents almost immediately and sold into a world of entertainment, where they would exist for most of their lives.

First appearing in a public exhibition at the tender age of ten months, the pair changed hands many times over the years before eventually being acquired by a wealthy merchant named Joseph Pearson Smith, who acted as their manager. Through Smith, the twins were billed as “The Carolina Twins” and toured the American South, forced to work as sideshow “freaks and human oddities,” as they were often referred.

Unlike their fellow circus attractions, the Carolina Twins commanded an additional 50 cents on top of the price of admission just to be seen, making them a hot commodity from the start of their career. At the age of three, the pair were appearing at P.T. Barnum’s American Museum in New York City. 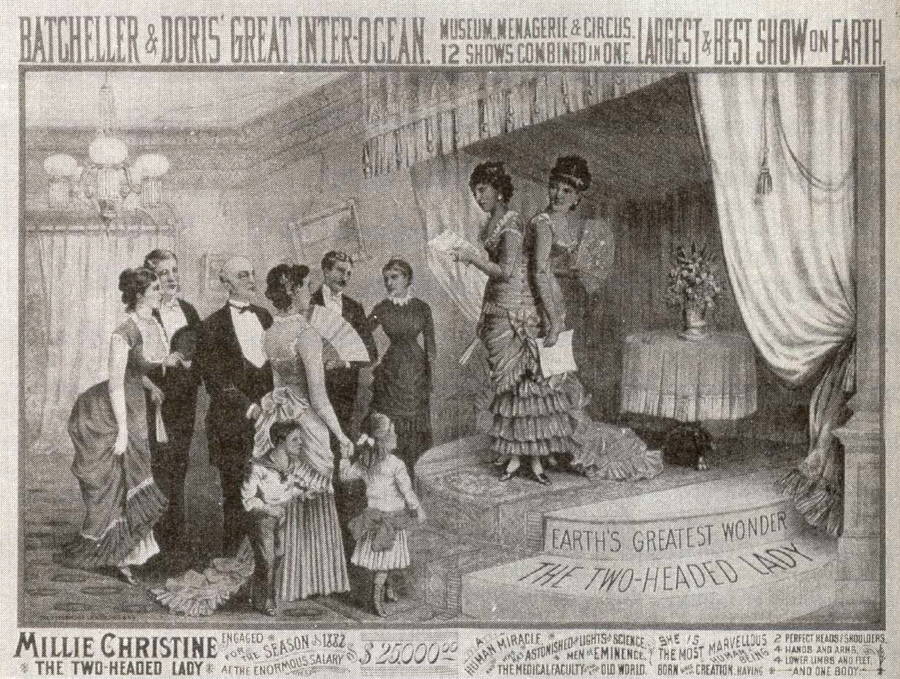 Wikimedia CommonsAn 1882 poster promoting an appearance of the McCoy twins.

Competing circus promoters, managers, and exploiters alike recognized the twins’ earning potential, and Millie and Christine McKoy were kidnapped several times before being kidnapped around the time they were being shown in New York.

With the help of the twins’ mother, Smith searched for the kidnapped girls, eventually finding them working overseas in England. Taking his case to an English court, Smith returned with the twins upon winning the battle, and both they and their family were relocated to live with Smith and his wife. There, the pair learned to read, write, and speak two new languages, German and French, and decided to remain with the family after emancipation in 1863.

For the next 30 years, Millie and Christine continued to work the circus scene, no longer sideshow attractions, but as a singing duo. Rebranding themselves as “The Two-Headed Nightingale,” the pair worked the countryside from coast to coast, with Christine singing soprano and Millie singing alto.

They eventually revisited the places at which they were forced to appear in childhood, on their own terms — first, upon being invited to perform for Queen Victoria of England, and later, by performing in Barnum’s traveling circus. The duo also told their life story in their own words with an autobiography entitled The History of the Carolina Twins, in which they explain:

“We might, could we feel disposed, tell many anecdotes of our travels, but we think a simple narrative of ourselves is all that at present those of our patrons who buy our little book will require.”

The booklet was published by Buffalo Courier Printing House, and was “sold by their agents for their (the twins) special benefit, at 25 cents.” 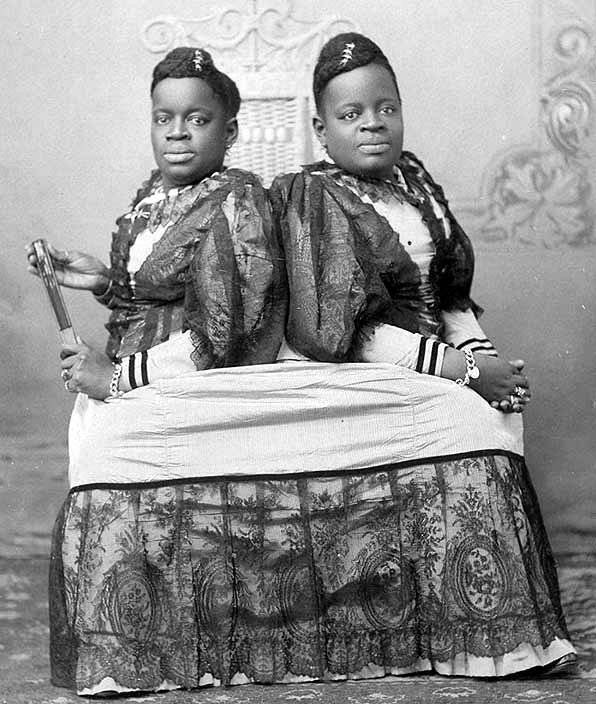 After 30 years of performing all over the world, Millie and Christine retired to the plantation they were born at after inheriting it from their father, who had purchased the property sometime earlier.

In 1912, Mille contracted tuberculosis and died on October 12, her sister joining her in the great beyond just 17 hours later. The pair were buried in a double coffin in an unmarked plot since overgrown, before being moved to the Welches Creek community cemetery in 1969, where they can still be found resting today.

After learning about Millie and Christine McKoy, read about the curious life of the conjoined Hilton sisters. Then, read up on the sad stories behind some of the Ringling Brothers’ most famous “freak show” members and learn the story of “Lobster Boy.”