After secretly selling off a body, they would give the deceased's family the cremated remains of an entirely unrelated person and say that they were from their loved one. 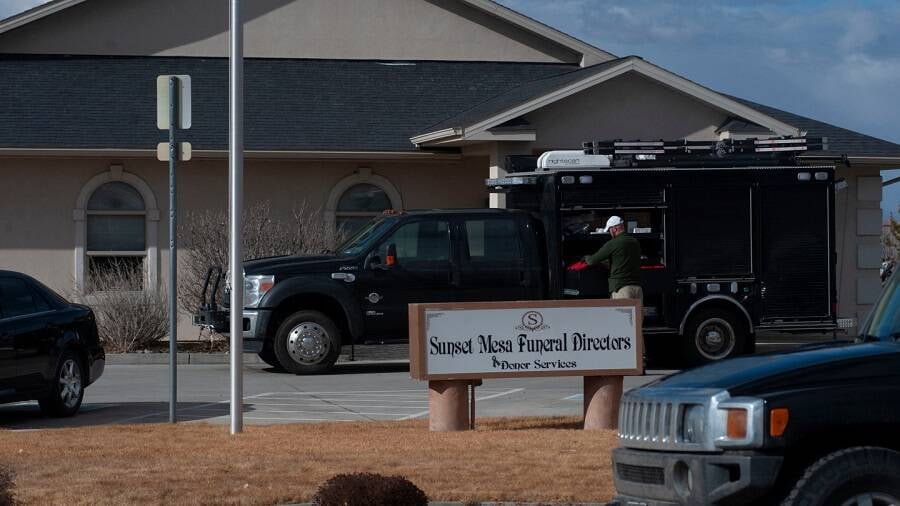 While the recent arrests of Megan Hess and Shirley Koch for mail fraud and transportation of hazardous materials may sound relatively innocent, the truth is far more macabre. In fact, the mother-daughter team had been illegally selling hundreds of corpses intended for cremation out of the family funeral home in Montrose, Colorado for almost a decade.

According to NBC News, Hess and her mother now face 135 years in prison each. According to authorities, they made hundreds of thousands of dollars selling off bodies and then lying to families about the fate of their loved ones’ remains.

This began soon after Hess and Koch opened the Sunset Mesa Funeral Home in 2009 and then started a nonprofit donor services business out of the same venue.

On March 17, the unsealed indictment revealed that this donor services business would harvest the human remains and then sell them, illegally and without the families’ knowledge. Buyers ranged from educators and scientists to individuals in the medical industry. 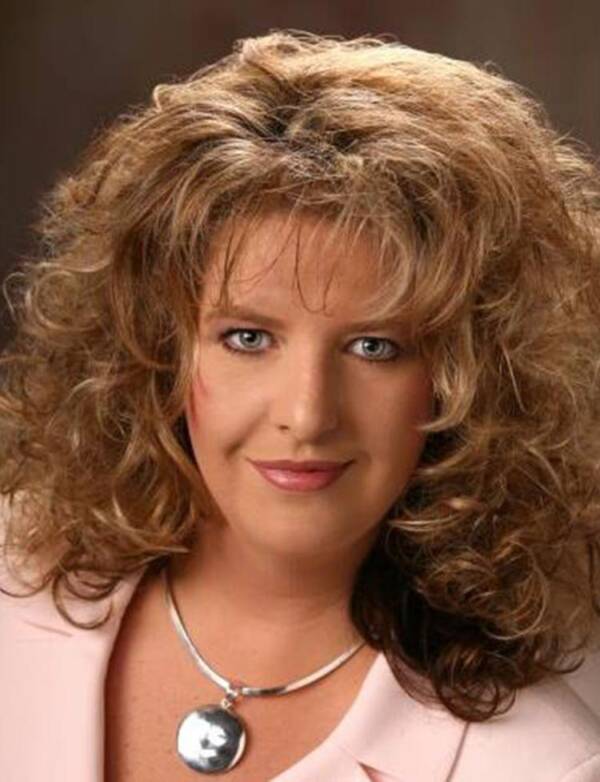 According to Insider, Hess and Koch simply lied to families and sold off entire corpses — or individual heads, torsos, arms, and legs — with no one being the wiser.

They would even give families cremated remains that supposedly came from their loved one but in fact came from another person entirely: “Hess and Koch also delivered cremains [cremated remains] to families with the representation that the cremains were that of the deceased when, frequently, that was not the case.”

A Denver 7 news segment on the Sunset Mesa scandal.

They ran this scheme repeatedly from 2010 to 2018 and built it into a lucrative business. Because they took money for cremations but then made even more money on the same bodies by selling them instead, they were able to offer lower “cremation” prices than their competitors and thus keep the bodies coming in.

“As a result, Hess was able to ensure a constant supply of bodies for her and Koch’s body broker services business,” the indictment said.

All in all, authorities believe that the two women made hundreds of thousands of dollars from the donor services business. One year, they made so much money extracting gold teeth from the bodies that they used the proceeds to take the whole family to Disneyland.

For U.S. Attorney Jason Dunn, they not only betrayed the trust of grieving families “during one of the worst times in a person’s life,” but caused extremely unnecessary pain for them, as well.

“It is hard to imagine the pain and worry of those who used Sunset Mesa and not knowing what happened to their loved ones’ remains,” he said. 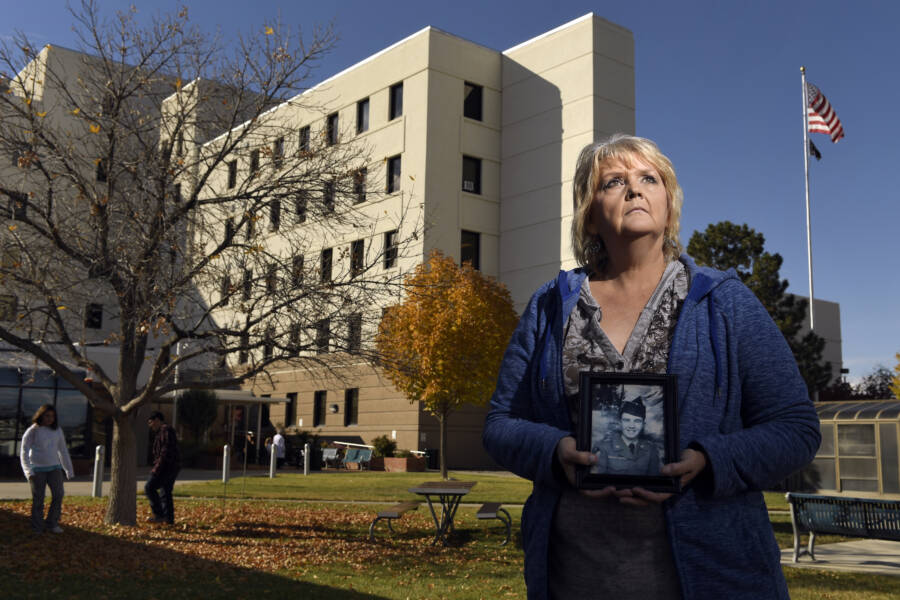 Joe Amon/The Denver Post/Getty ImagesJudy Cressler was one of countless victims of the scheme. The FBI recently told her that the body of her father, veteran Harold Cressler, was sold to Saudi Arabia.

Now, with Hess and Koch facing up to 135 years in prison each, some of their victims are feeling a modicum of justice while also believing that these wrongs can never truly be righted.

“I think it will bring me some closure knowing that she isn’t allowed to do this anymore and there’s some justice out there,” said Nastassja Olson, whose mother’s body was believed to be sold off by Sunset Mesa. “She gets to suffer. She gets to suffer in prison for a long time.”

Olson said that Hess “gave me the creeps from the get go,” but she nevertheless proceeded with Sunset Mesa. Her anxiety grew when Hess wouldn’t let the family be alone with the body. Then, when she learned that Sunset Mesa was under investigation months later, she began looking through her mother’s ashes:

“I found a bunch of stuff in the ashes that just seemed like it shouldn’t really be there. A bunch of weird metal pieces — almost looked like metal tacks and screws.”

Ultimately, as Olson put it, “We’re just kind of left not knowing. We might have her body, we might not. We might have other people’s ashes. It could be a mixture.” 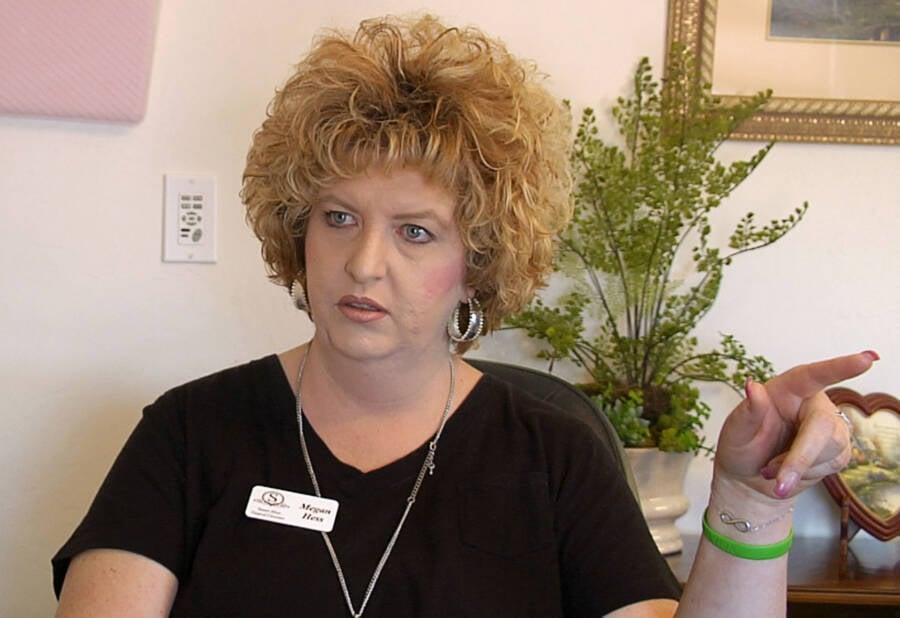 Mike Wood/ReutersA photo of Megan Hess that appeared in a Reuters report on the illicit activities at Sunset Mesa and elsewhere.

Sadly, this isn’t the first time such a business has been caught selling human remains. It was only in July that Arizona authorities discovered buckets of heads and limbs intended to be sold out of a body donation center.

A Reuters investigation in 2017 found that this black market for bodies has been booming worldwide in recent years and is likely a multi-billion-dollar industry.

After learning about the mother and daughter team who sold body parts out of their funeral home instead of cremating them, read about the grisly history of body snatching and take a peek inside body farms. Then, learn about the decaying bodies of 11 babies found hidden in the ceiling of a Detroit funeral home.