Everyone seemed to be in on the prank but the bride who was shocked when her brother arrived with a llama and its handlers in tow. 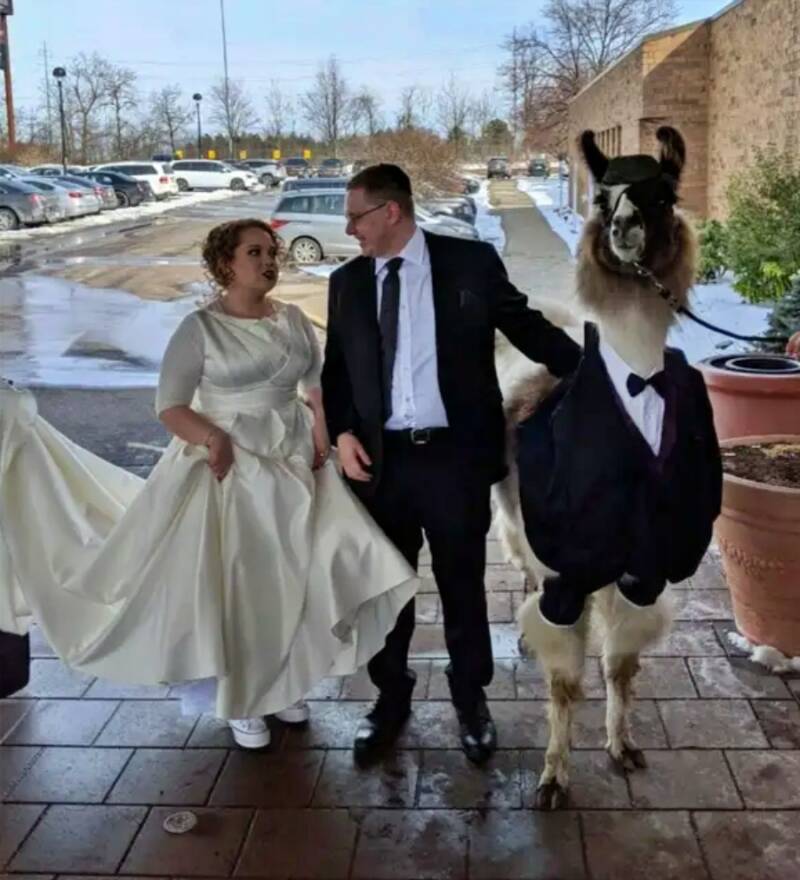 Mendl Weinstock Bride Riva Weinstock can’t suppress her exasperation when she sees her brother, Mendl, with the llama he brought as his date.

Weddings are complicated family occasions. They often provide the clan’s most mischievous members with an opportunity to cause trouble, so is it any surprise that this woman’s brother brought a llama to her wedding as his date?

According to CNN, Mendl Weinstock was merely following up on a longstanding joke when he arrived at his sister’s wedding with a llama outfitted in a custom tuxedo. To Riva Weinstock’s dismay, photos of her furry wedding guest are now all over the internet after her jokester brother decided to post them on Reddit. 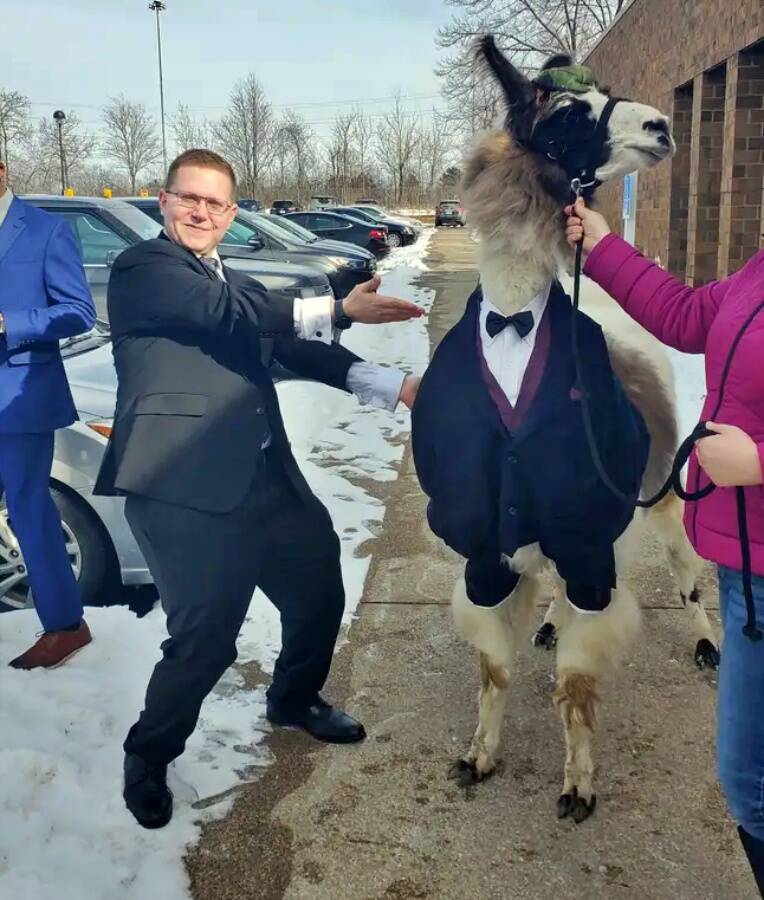 Mendl Weinstock Mendl said paying $400 to rent the llama was worth it to see the look on his sister’s face.

One picture circulating the internet includes Weinstock, the llama, and Riva who is dressed in her bridal best and wearing a look on her face that only children with siblings would understand.

“I was not too thrilled. I think my face in the picture pretty much wraps it up,” Riva admitted. But that reaction of sheer disbelief was exactly what her brother had hoped for.

“My sister walked outside and had this humongous gaping looking on her face,” he told Buzzfeed News. “There’s nothing that can really prepare you for walking outside and seeing a llama.”

The idea of bringing a llama to his sister’s wedding started as a joke five years ago. As Weinstock tells it, the siblings were driving from their home in Ohio to Indiana with a few friends. 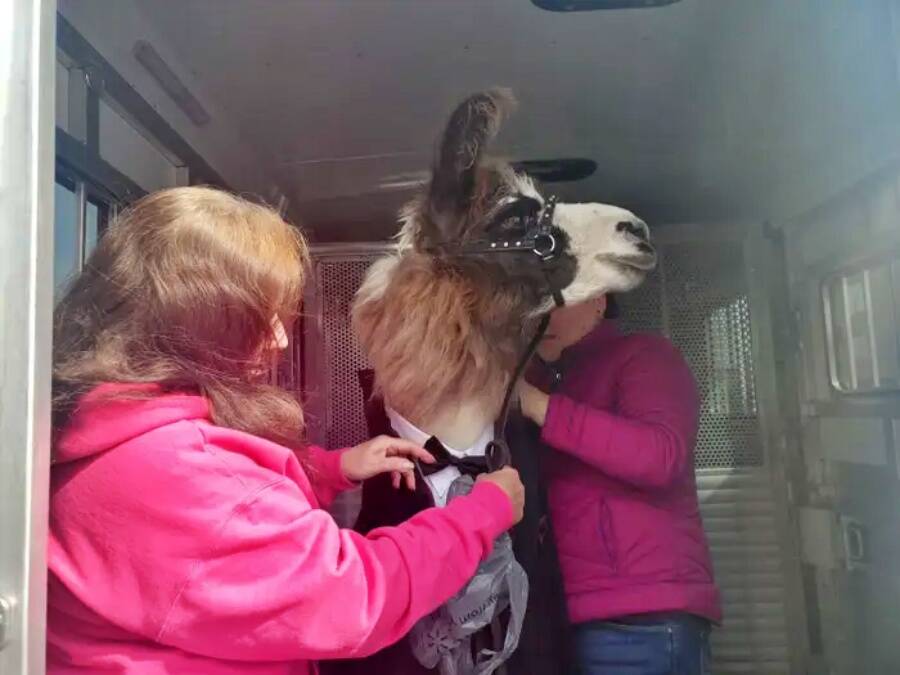 Mendl WeinstockShockey the llama getting dressed up in his custom tuxedo by his handlers.

“She was talking about her wedding, planning it, making plans almost as if it was going to happen the next day even though she wasn’t dating anybody at the time,” Weinstock explained. So, he did what brothers usually do: He tried to pick a fight with her.

“I said, ‘If you make me come to this wedding, I’m going to bring a llama with me.’ It was just the first thing that popped into my head.”

A fight ensued and then-17-year-old Riva became exasperated with her brother — quite possibly thinking that he was just trying to be a pain — and gave in.

“I give up. The llama is invited to the wedding,” she reportedly said. Riva had since forgotten all about the weird sibling agreement they had made in the car that day years ago until last October when she got engaged. An hour after she told her brother about the happy news, Weinstock texted her with the confirmation for his llama rental. 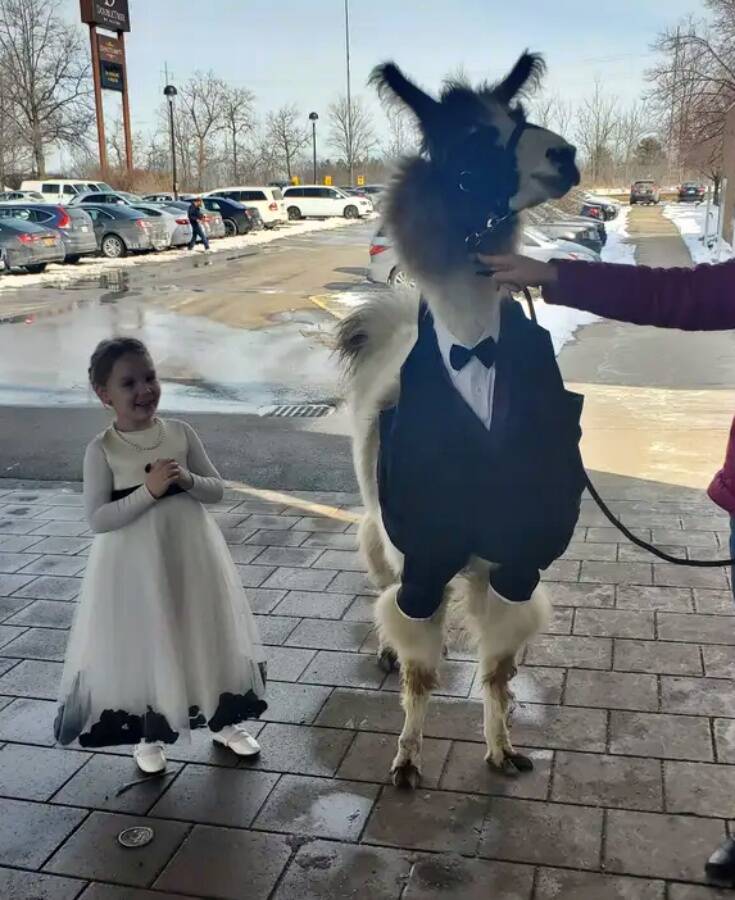 Mendl WeinstockDespite Riva’s dismay, Shockey did bring joy to a lot of the wedding guests.

Weinstock, 21, said he booked Shockey the llama for $400 from a place not far from Cleveland. He even had a custom tuxedo made for the furry guest. Fortunately, the llama made a brief appearance outside of the wedding hall for 30 minutes while amused guests took selfies.

It’s not exactly the entertainment Riva had in mind for her wedding reception, though.

“When my brother puts his mind to something, he gets it done. So at some point, I had to accept it and decide that it was easier to get in on the joke than to fight it,” Riva said.

Unfortunately, it seemed like everyone except the bride had been in on the joke. Inside the wedding hall, one of Riva’s friends propped up two inflatable llamas that they promptly placed at the couple’s table. 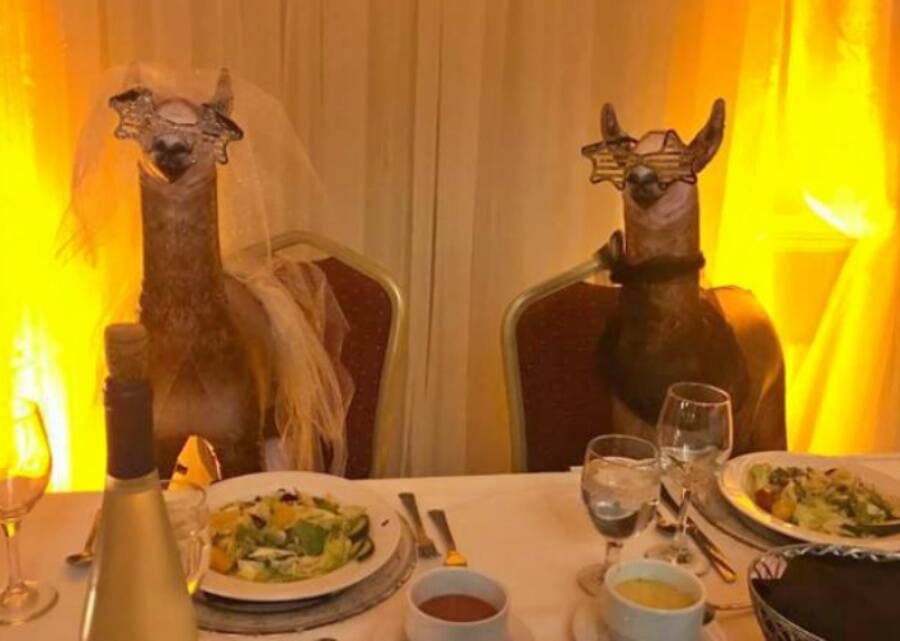 Riva Weinstock Inflatable llamas at the newlywed’s table. It seems everyone was in on the prank except for the bride.

“It was so worth it. I mean it was worth it just to see her reaction, but it’s been more worth it now that I’ve gotten all this internet fame,” Weinstock said.

However, this stunt won’t be the last of this sibling war. As it turns out, Weinstock has his college graduation coming up and his sister is already making plans to make the day extra special for him.

“I’ve definitely started planning my revenge,” Riva said. “He should sleep with one eye open.”

Perhaps the llama stunt might not have been worth the $400 after all.

Next, read about the most elaborate pranks ever pulled off. Then, check out some of the funniest animal photos you’ll ever see.