Man With Gun Tattoo On His Forehead Arrested On Gun Charge

"The real weapon was placed in property and evidence," the police quipped on their Facebook page. 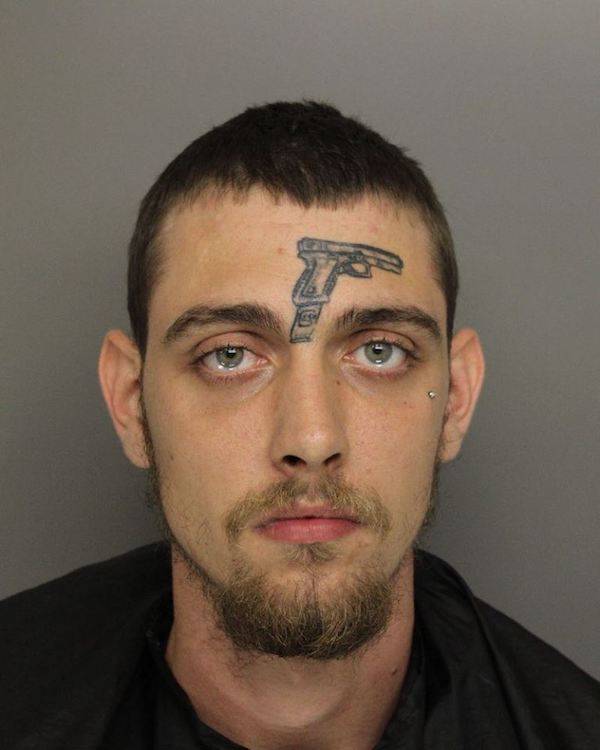 A South Carolina man with a large tattoo of a gun on his forehead was arrested for unlawful carrying of a firearm in Greenville on June 19, according to local police.

Just after Michael Vines was involved in an unspecified car wreck at the intersection of Green Avenue and Guess Street, firefighters at the scene witnessed the man toss a fully-loaded Smith & Wesson .38 caliber revolver into the grass nearby. When they noticed what was happening — and figured that Vines was ditching his gun because he had been carrying it illegally — the firefighters alerted the Greenville Police Department.

Police soon recovered the weapon from the scene and arrested Vines for unlawful carrying of a firearm and also charged him with driving under a suspended license and speeding.

Vines is federally prohibited from possessing a firearm, according to police (for reasons they did not make clear). Furthermore, with a specific list of exceptions, the South Carolina Code of Laws states that “it is “unlawful for anyone to carry about the person any handgun, whether concealed or not.”

Unlawful possession of a handgun is almost always considered a felony in South Carolina, but can occasionally be classified as a misdemeanor. The penalties for unlawful possession can include fines up to $2,000, jail time up to five years, or both.

No word yet on Vines’ release or when a trial will be held.

And as for the gun, the police quipped in their Facebook post, “The real weapon was placed in property and evidence.”

Next, read about the California burglar who was arrested thanks to DNA evidence after cops found his fecal matter still in the toilet at a crime scene. Then, read about the criminal with his Social Security number tattooed on his forehead.