Ernst Röhm: The Early Nazi Leader Who Rivaled Hitler — And Was Executed For It

Ernst Röhm was ruthless in his rise to power in Nazi Germany. Too bad for him Adolf Hitler didn't like rivals — even if they were his friends. 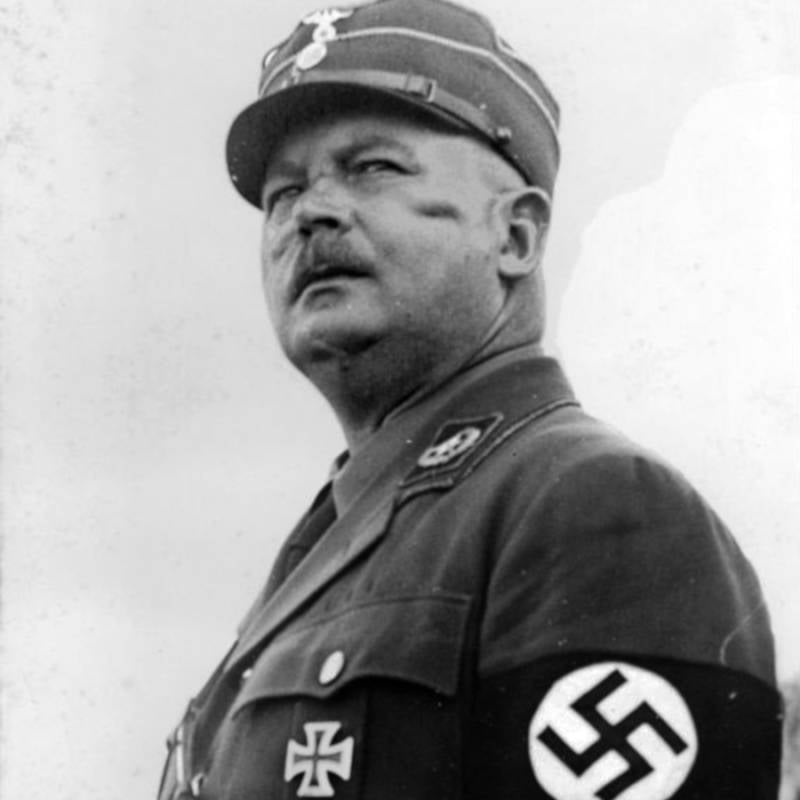 Wikimedia Commons A portrait of Ernst Röhm in his Nazi uniform.

Ernst Röhm — just like Hitler — desired a strong Germany. As a former soldier wounded three times during World War I, Röhm was upset that the loss had resulted in limitations on the country’s military. He believed it should be large, fierce, and steadfast.

Röhm was also ruthless like Hitler. His only weakness was that he underestimated the Führer’s wrath.

Röhm was born on Nov. 28, 1887, in Munich. He joined the German army in 1906 and made a career out of it. During the outset of World War I in 1914, he was seriously injured as German infantry positions advanced into France. Two years later, he suffered another serious wound during the Battle of Verdun.

Röhm was relegated to office duty for the rest of the war though he had earned the rank of captain and was awarded the Iron Cross Frist Class. Röhm grew discontented with and angered by the Treaty of Versailles at the end of First World War which stipulated that the defeated German army couldn’t exceed 100,000 people. 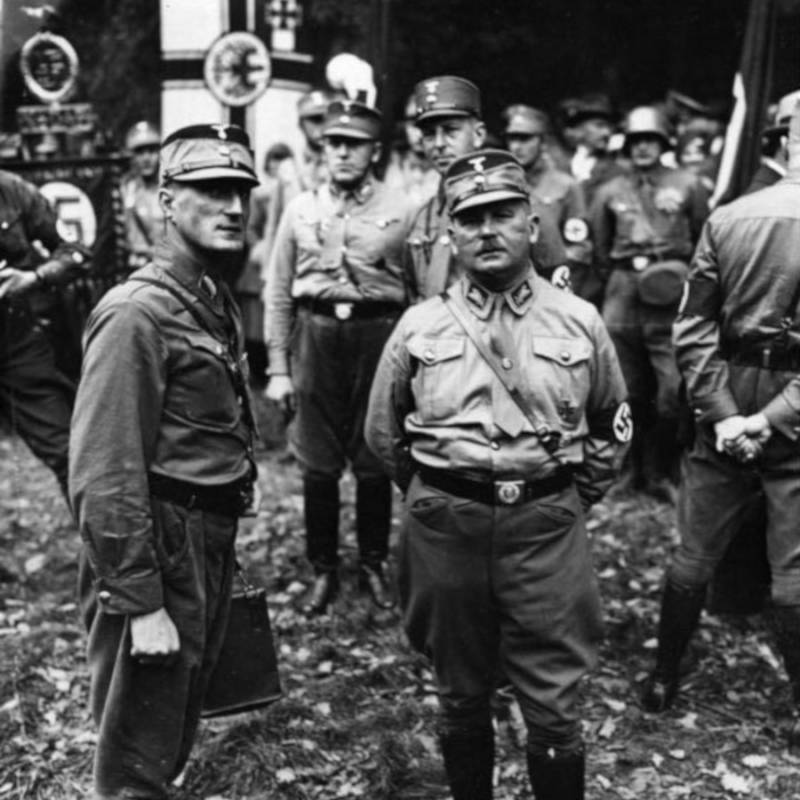 Wikimedia Commons Röhm in Bayern with adjutants and troops. 1934.

He hated that Germany had been defeated and become weak. In the battle of socialists and communists in German politics, he came to loathe both parties. Thus in 1919, Röhm joined a third and alternative party in Munich that shared his points of view.

Ernst Röhm And The Nazi Party

Ernst Röhm felt the Weimar Republic — the ruling party — was weak. He felt that traditional political parties weren’t in touch with what Germans needed most.

Hitler joined the German Workers’ Party around the same time. He gave fiery, passionate speeches about how Germany needed to rise from the ashes of its defeat. He blamed Jews, unfair war reparations, and the current government for the country’s woes. The Party grew throughout the 1920s — and Hitler took the helm in 1921.

Realizing they had much in common, Röhm and Hitler became friends within the young Nazi Party. Both served in World War I and felt Germany needed to control its own destiny. Together, they decided to take increasingly drastic actions to change Germany.

When Hitler assumed control of the German Workers’ Party, he unified and strengthened an organization of soldiers known as the Sturmabteilung (SA), or brown-shirted stormtroopers, based in Bavaria.

This paramilitary organization operated outside of German law. While the official army was limited to 100,000 people, there was nothing in the Treaty of Versailles that went against an unofficial army. 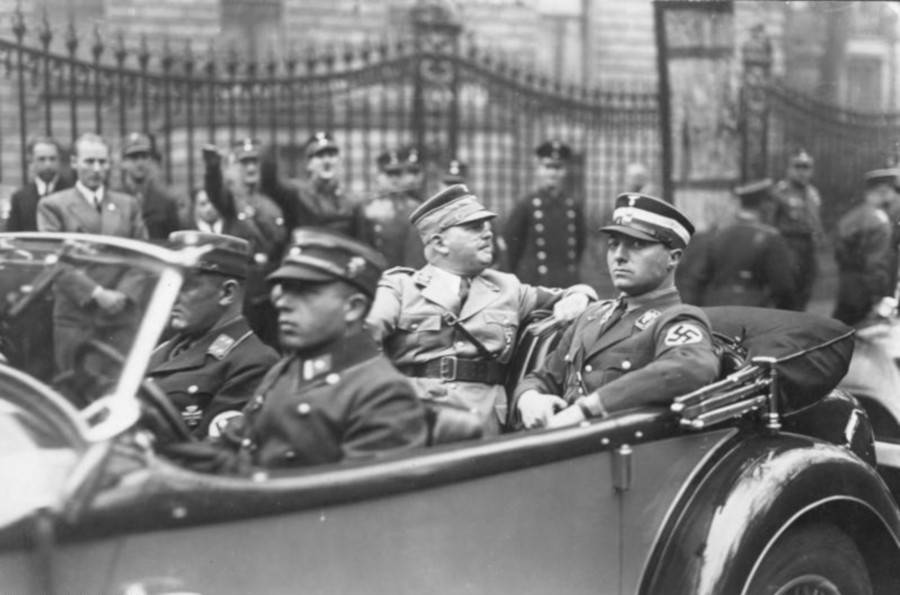 Wikimedia Commons Röhm in the back of a car with Karl Ernst, 1933.

Before Hitler and Röhm, this group was a loose conglomeration of several small factions. Its members took the law into their own hands, causing trouble and disrupting the government. They protected party meetings, marched at rallies, and physically assaulted political opponents. They also intimidated voters at local and national elections.

Hitler unified these loose-knit factions into one larger group called the SA.

Hyperinflation and a series of worker uprisings had left the Weimar Republic in shambles and so Hitler and Röhm planned to take advantage of this weakness and overthrow it.

Röhm and Hitler saw an opportunity in Bavaria. The two plotted a putsch, or revolution, starting in Munich — with the SA as the enforcers of the uprising.

Both men needed General Erich Ludendorff’s support for the rebellion to work. He was a German war hero and greatly respected by the SA. On the night of Nov. 8, 1923, Ludendorff made his move. He, along with Hitler and hundreds of armed SA men, stormed the Bürgerbräukeller (beer cellar or hall) where Munich officials were at a meeting. Hitler demanded their loyalty; under duress, the city’s leaders agreed. 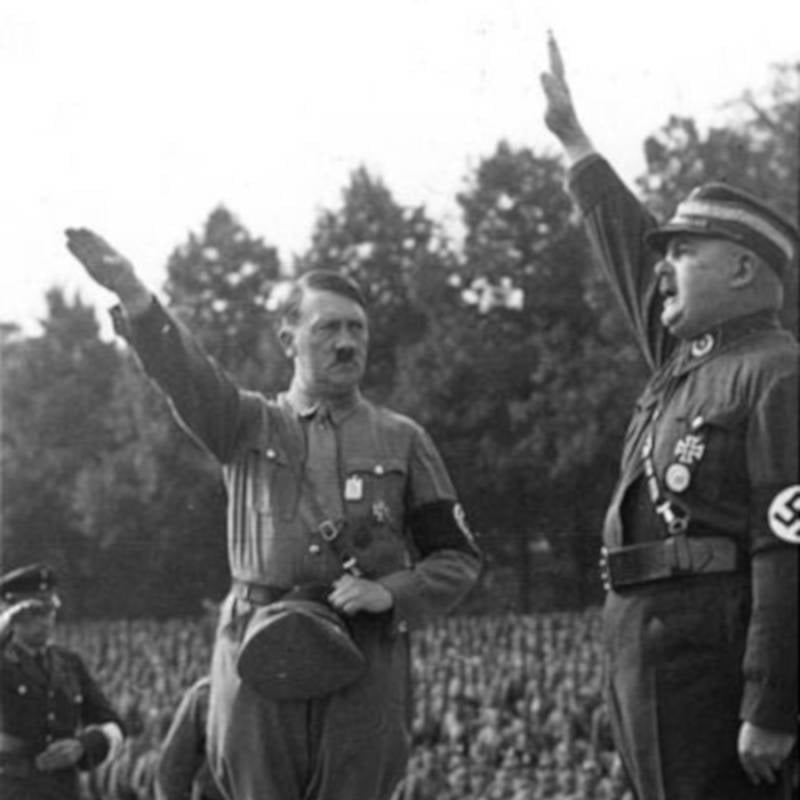 Rupert Colley/Flickr Röhm and Hitler at a Nazi rally.

The takeover may have gone off without a hitch, except that Hitler left the beer hall to attend to other business. The following morning, police in Munich arrested Hitler, Ludendorff, and Röhm. Military troops killed SA members as they marched on the city’s government plaza. The Beer Hall Putsch fell apart.

Hitler served less than a year of a five-year sentence — in which he spent writing Mein Kampf. Ludendorff and Röhm both received suspended sentences in a Bavarian court.

Over the next nine years, Hitler and Röhm became more discreet in regards to the SA, though Röhm did at one point leave the Nazi Party which saw his brief hiatus to Bolivia until 1928. A revolt against the government in Bolivia and a growing success of the Nazis in Germany prompted Röhm’s return. Besides, Hitler had personally requested he come back, anyway.

Hitler consequently made Röhm his Chief of Staff in 1931. By 1932 the SA had grown to 400,000 people. Just two years later, Hitler was named chancellor. By this point, the SA’s numbers swelled to between 3 and 4 million; young men without work, without money, and without a purpose. The Nazis and the SA gave these young rebels a cause.

Röhm as head of the SA now commanded a sizable force that could take over at any time. He was tremendously powerful among Hitler’s ranks and was even a favorite among Hitler himself: he was the was the only senior Nazi who addressed Hitler by his first name as opposed to ‘Mein Führer.’

What’s more, Röhm was openly gay — and Hitler knew it, though he did not seem to be bothered by it.

Hitler’s military advisers, Hermann Göring and Heinrich Himmler, thus feared a possible coup from Röhm and tried to turn Hitler against him. 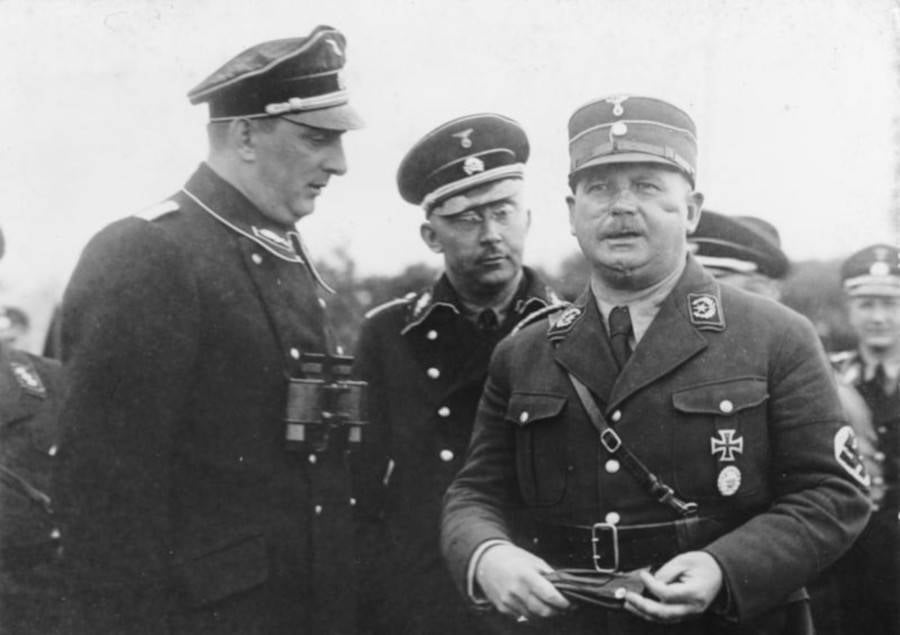 Wikimedia Commons Röhm on the right with Heinrich Himmler in the middle, circa 1933.

Himmler and Göring warned Hitler constantly of Röhm’s growing power, how his large SA could absorb the German military — a suggestion Röhm had put forth himself. Röhm could unseat Hitler with sheer force of numbers. Further, many in the Party disliked that Röhm was a homosexual and keeping him around could reflect poorly on Hitler.

Rather than work out their differences, Hitler struck first. On June 29, 1934, Hitler personally arrested Röhm and offered his former friend a choice: suicide or death. Röhm refused suicide. The Fuhrer ordered the SS then to execute the former head of the SA. 200 other senior SA officers were arrested and perhaps some 400 killed in a purge known as the Night of Long Knives. 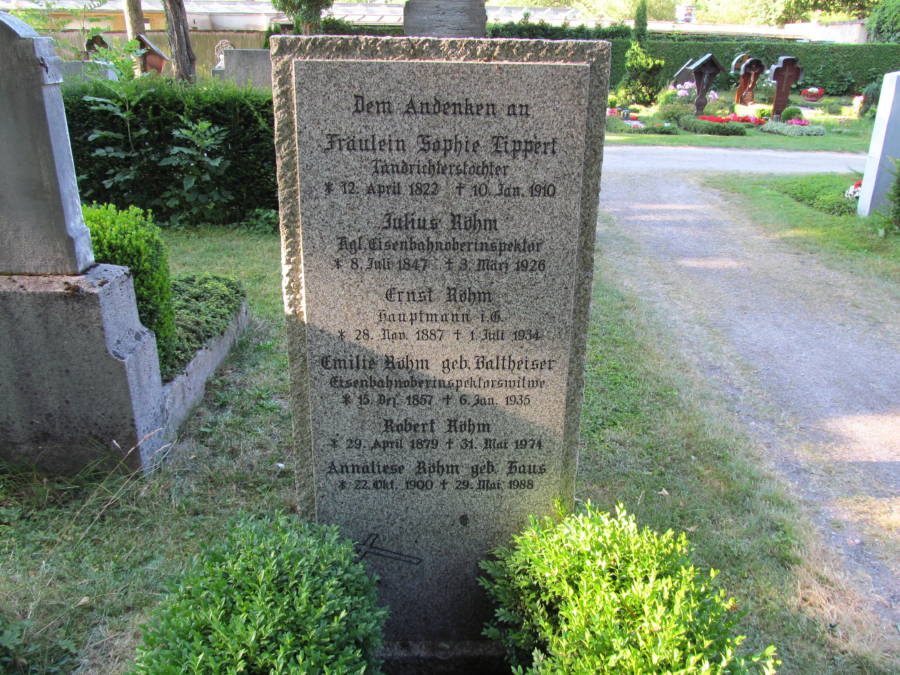 David Holt/FlickrThe grave of Ernst Röhm at Westfriedhof in Munich.

“Hitler needed Röhm’s military skill and could rely on his personal loyalty, but he was ultimately a pragmatist,” the Jewish Virtual Library noted.

Hitler’s paranoia drove him to trust no one, even those he once considered close, like Ernst Röhm. In the end, the fate of Röhm proved a harrowing exercise in Hitler’s supreme power and the beginning of his reign as the decider of life and death for millions in Europe.

After this look at Ernst Röhm, check out these facts about Hitler that give you insight into the mad dictator’s mind. Then, read about Hitler’s doting mother who had no idea she was raising an evil human being.