Florida Gas Station Owner Accosted By Urine In The Microwave 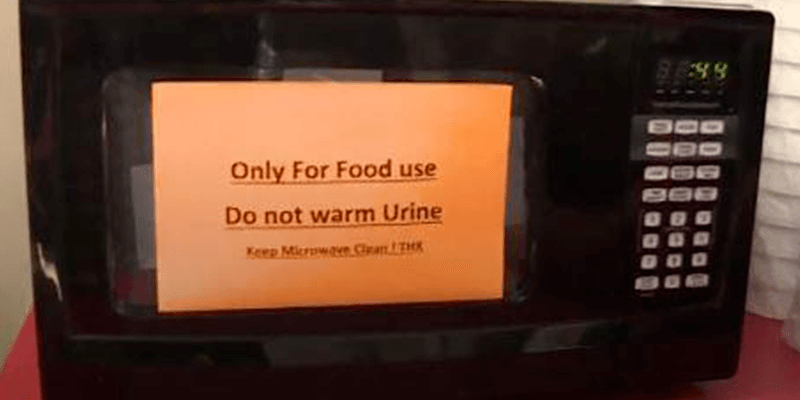 First Coast NewsBP gas station and convenience store owner Parul Patel has instituted a strange ban for use of his microwave.

In news that could only have come from Florida, one Jacksonville gas station owner became “sick and tired” of locals using his microwave to warm their urine.

BP gas and convenience store owner Parul Patel claimed that “random people keep walking in every day” to warm containers of their urine in his microwave.

Those coming into the station to use the microwave were allegedly not customers, but instead, were suspected to have been en route to a nearby drug testing facility.

Indeed, a LabCorp and Quest Diagnostics are both within walking distance of the gas station. Although a spokesperson for Quest Diagnostics alleges that their facility does not engage in drug testing, LabCorp has remained silent on the matter.

Patel, therefore, believed that these people were desperate to pass their drug tests and using the microwave as a way to warm the urine so that it’d appear as if it had just come out of a human body and wasn’t a pre-packaged clean sample.

Regardless, “They walk in off the street, microwave urine containers then leave.” Patel said these people often become violent or aggressive when asked not to do so.

He described one such incident in which the culprit was so desperate to microwave her urine that she starting “cussing” and replied: “Well, where is the sign that says you can’t use this for this kind of purpose?”

So the Florida man created a warning that said just that: “Then I’ll put the sign saying this is only for food use and not to use with your urine or anything else.”

His “don’t microwave your urine” poster has since gone viral. Whether it is working remains to be seen, though we can surmise from this experience is the sign in place or not, that microwave should really be replaced.