"Compared to the size of a typical gingerbread house that you might buy in a grocery store kit, mine is 20,000 times smaller." 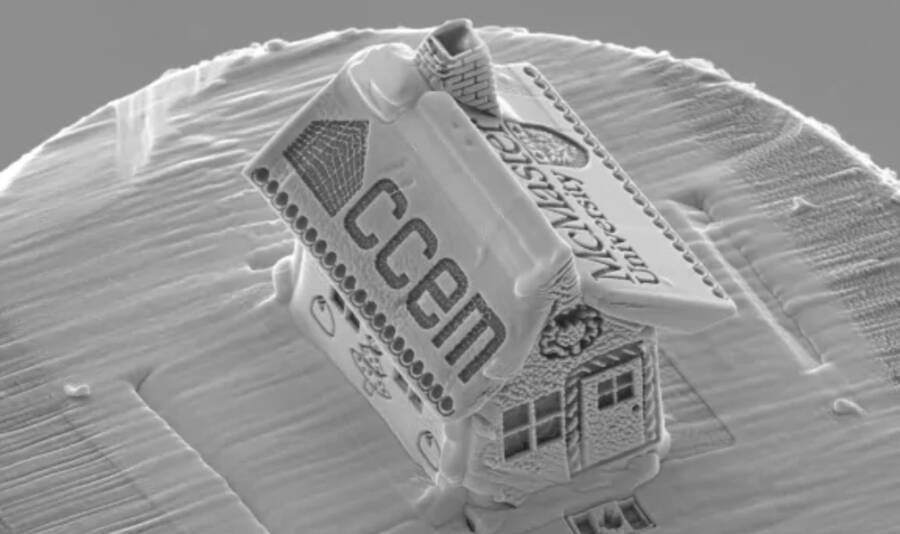 Canadian Centre for Electron Microscopy/McMaster UniversityA Canadian scientist built this tiny gingerbread house that measures in at one-tenth the width of a human hair.

There are many ways people can get into the holiday spirit. For scientists, that might involve integrating some merry cheer into their particular field. And one very skilled electron microscopy scientist recently did just that by carving out what is believed to be the world’s smallest gingerbread house.

As reported by CBC Canada, Travis Casagrande, a research associate at Canada’s McMaster University, built a miniscule gingerbread house that is only one-tenth the width of a strand of human hair.

“Compared to the size of a typical gingerbread house that you might buy in a grocery store kit, mine is 20,000 times smaller,” Casagrande explained.

The gingerbread house is complete with elaborate details like a wreath, windows, a door, and chimney. He also carved out a tiny Canadian flag doormat and the logo of his university on its roof.

But unlike your average gingerbread house, you wouldn’t want to eat this tiny structure. Instead of gingerbread, Casagrande’s mini house is made out of silicon, which he used to etch out the tiny structure’s body using an ion beam microscope. A video of the intriguing holiday project was published online by the university:

The folks at @ccemcanada are getting in the holiday spirit by creating a teeny-tiny gingerbread house on top of a teeny-tiny snowman. Together, both decorations are hardly taller than a human hair. https://t.co/8fFc9RSDBA pic.twitter.com/hb0qgHvQJF

Casagrande’s work at the Canadian Centre for Electron Microscopy at McMaster University involves electron microscopes, which can be found in many research laboratories. As the name suggests, these microscopes use electrons to create an image of an object and can typically magnify things up to 2 million times.

The high-magnification that these electron microscopes have makes them very useful for scientists to inspect microorganisms and cells, medical biopsy samples, molecules, and metal structures, among other things.

“We are helping researchers understand the structure and properties of materials, and this is in order to solve problems and make things stronger, lighter, last longer, more affordable, more efficient,” Casagrande explained of the lab’s research work.

Believe it or not, the tiny gingerbread house was also placed on the head of a microscopic winking snowman, making Casagrande’s Christmas creation even more impressive. The festive details on the gingerbread house’s exterior and the snowman both show incredible craftsmanship, precision, and — of course — patience. 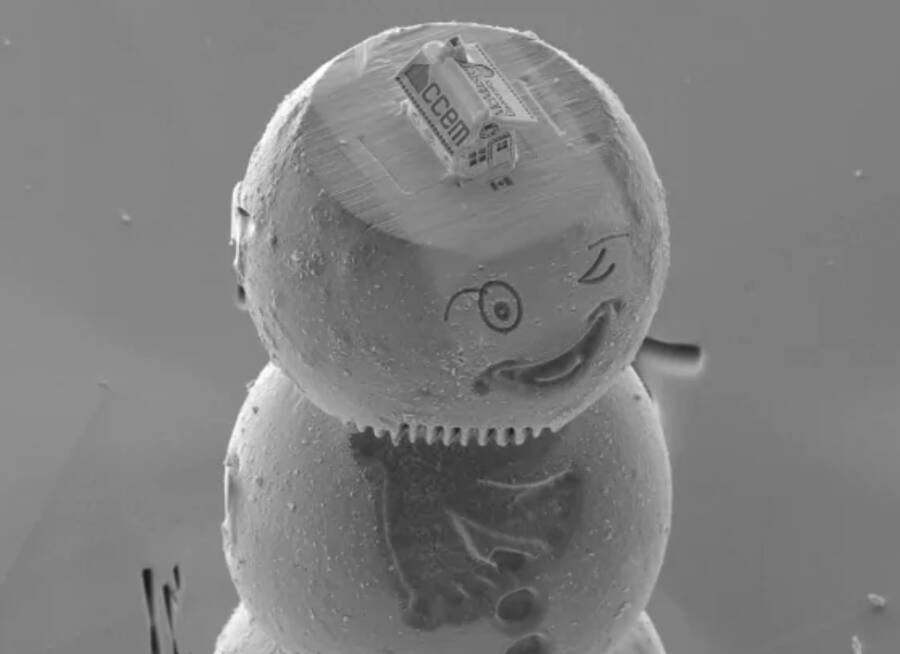 Canadian Centre for Electron Microscopy/McMaster UniversityCasagrande’s tiny gingerbread was built on top of a microscopic snowman.

“Some of the construction of this was quite unconventional, though, so I had to come up with new techniques,” he said.

A zoomed-out perspective of the tiny structure and the similarly tiny snowman placed next to a strand of hair show just how small the objects really are. By comparison, the piece of hair actually looks much larger.

“The point of that was sort of to make some jaws drop when you realize even the snowman, which is much bigger than the house, is extremely tiny compared to the hair you see next,” Casagrande said. While the scale of the project appears small, it took an enormous effort to complete. The delicateness of the microstructures meant that they had to be done right the first time around.

“There are a lot of opportunities where things can go wrong in the making of this — and they did,” Casagrande said. “There’s no undo button.” According to the scientist, the spheres of the snowman’s body were some of the harder parts to do, even though they were larger than the pieces he normally works with.

In all, the mini gingerbread house and snowman took two days to complete. Casagrande said that he hopes his tiny Christmas display inspires people who aren’t familiar with the field of electron microscopy and that it demonstrates the important work done using the lab’s electron microscopes.

This tiny Christmas display isn’t the first time the researcher has brought major attention to the lab’s micro-sized projects. In 2017, Casagrande erected a tiny Canadian flag on a penny in honor of Canada’s 150th birthday.

“We wanted to spark scientific curiosity for the general population,” he said, “for kids who are maybe thinking of careers in science, or even for adults.”

Next, peek inside the tiny houses an Oakland artist is using to combat the city’s homelessness epidemic and read up on the world’s smallest mammals.