Harlequin ichthyosis, a genetic disorder that results in overly thick skin that's prone to cracking, used to mean certain death. Now, some people with the condition have lived into their 30s. 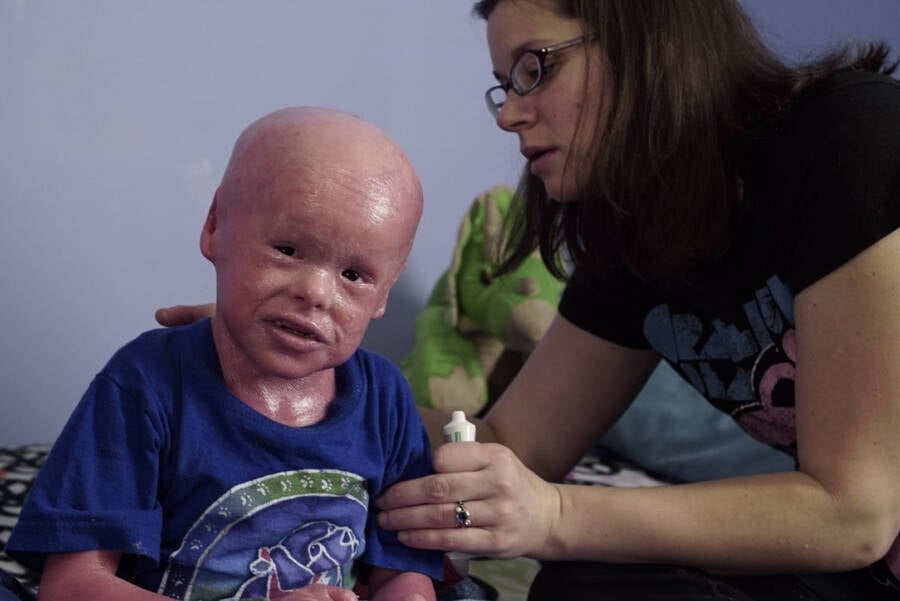 Steven Schloss/Barcroft Media/Getty ImagesFive-year-old Evan Fascianos’ mother rubs cream on his neck. He is one of only a couple dozen sufferers of Harlequin ichthyosis.

Living with a rare genetic disease can be difficult, painful, and sometimes even lonely. For those living with the serious skin disease known as Harlequin ichthyosis, the world can be a particularly cruel place where harsh judgements, fear, and a lack of understanding override the necessity of love, care, and kindness.

When a newborn baby in Turin, Italy was abandoned by his parents after they discovered he had Harlequin ichthyosis, nurses at the local hospital stepped in to help care for him. And while the young boy is in need of nearly round the clock care to help alleviate the discomfort that his painful affliction brings, he still knows how to smile and laugh just like any other child.

Known as Giovannino, staff at the hospital are hoping to get the word out about the baby’s need for a loving adoptive family who would be happy to provide care for an innocent child who had been left alone by those who should have cared for him most.

What Is Harlequin Ichthyosis?

Harlequin ichthyosis — also known as harlequin baby syndrome, harlequin fetus, and ichthyosis fetalis — is a rare but serious genetic condition that can be immediately identified at birth.

Babies born with the disease suffer from overly thickened skin that resembles thick scales (“ichthyosis” comes from the Greek word for “fish”), and is prone to severe cracks and painful splitting. Their skin’s thickness also makes it impossible to sweat properly, leading to an uncomfortable rise in body temperature.

Wikimedia CommonsAn 1886 illustration of a newborn with Harlequin ichthyosis. Since the 19th century, it’s become possible to live with the disease.

Those with Harlequin ichthyosis may also have trouble breathing due to the restricted movements of their chest, arms, and legs. They’re also prone to infections during the first few weeks of their lives due to the constant fissuring of their skin. And while there is currently no cure, modern medical advancements have greatly improved the life expectancy and quality of life of those who are diagnosed with the illness.

In 2013, a 20-year-old woman from Arkansas named Stephanie Turner became the first person with Harlequin ichthyosis to give birth to a child. Speaking to Good Housekeeping about her experiences with the disease and motherhood, Turner said:

“Since becoming a mom, my skincare regimen has… evolved. When I wake up, my skin is super dry and tight, so I have to take a bath every morning. Before my kids, I would soak for a long time. I’d check Facebook, relax — it was like a vacation. Now that I have kids, though, I get them breakfast first and then take a quick bath. But my two-year-old daughter is playing with my toothbrush in the bathwater and my three-year-old son is throwing towels. It’s definitely not a vacation anymore! My life is way more about taking care of them than of myself, which is how I wanted it to be.

Sadly, just a few months after her story was published, Turner passed away from complications due her illness. She was only 23 years old, proving that while those with the disease are able to live past childhood, it is still an illness that claims the lives of many who are only just beginning to fully experience life and all it has to offer.

Turner was survived by her loving husband and two children. There was about a 12 percent chance that each of their children would have the disease themselves, but neither did. 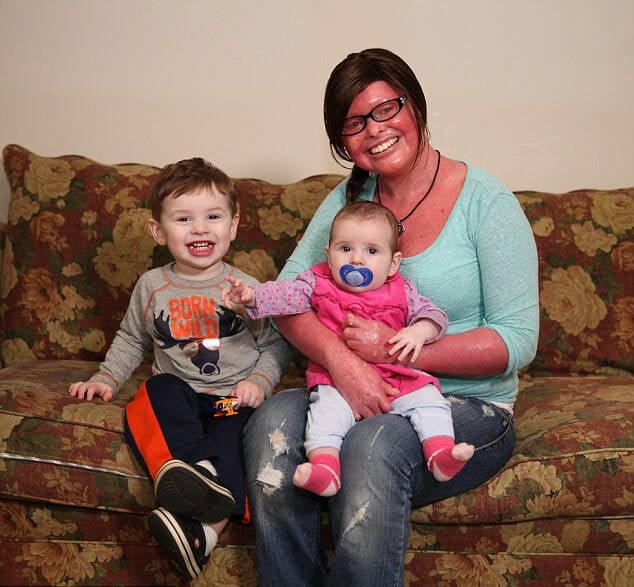 TLC/Barcroft ProductionsIn 2013, Stephanie Turner became the first person with Harlequin ichthyosis to have children. She died a few years later.

Since Harlequin ichthyosis is a genetic disease, it can be diagnosed before birth via an amniocentesis, a procedure that requires a pregnant person to have fluid collected from their womb for testing. Otherwise, the disease can be evident from birth based on appearance alone.

General knowledge about Harlequin ichthyosis and those who are born with it has come a long way since the earliest known cases. In 1750, a reverend in South Carolina wrote of his exposure to patients living with the disease in a diary entry:

“On Thursday, April ye 5th, 1750, I went to see a most deplorable object of a child, born the night before of one Mary Evans in ‘Chas’town. It was surprising to all who beheld it, and I scarcely know how to describe it. The skin was dry and hard and seemed to be cracked in many places, somewhat resembling the scales of a fish. The mouth was large and round, and wide open. It had no external nose, but two holes where the nose would have been. The eyes appeared to be lumps of coagulated blood, turned out, about the bigness of a plum, ghastly to behold… It lived about 48 hours.” 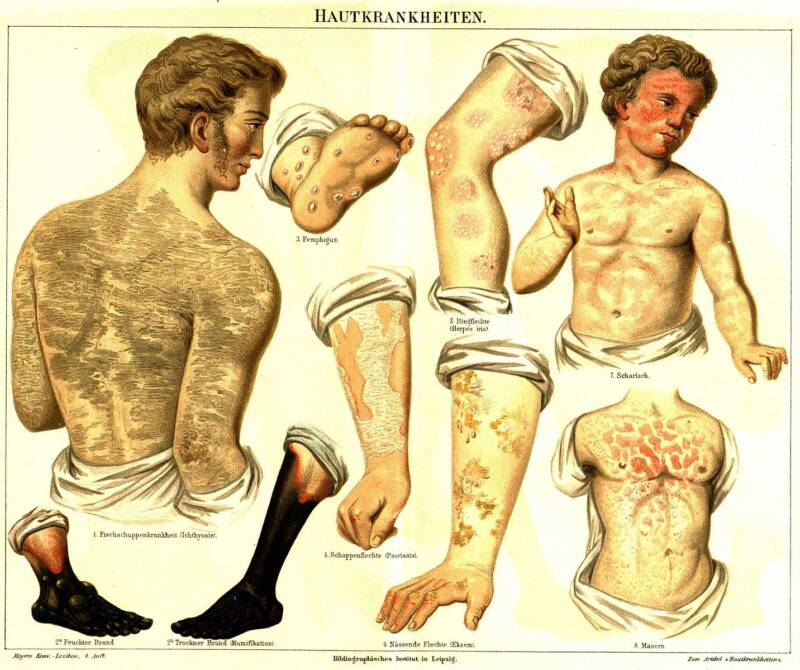 Medical breakthroughs and the ability to pinpoint specific genetic variances have helped reveal the exact cause of the disease: a mutation in the ABCA12 gene. This gene is responsible for ensuring that an integral protein is created that aids in the development of skin cells. Harlequin ichthyosis is the result of either a lack of this protein or a severely lowered amount of it.

One of the most important aspects of treatment is ensuring that the skin is constantly moisturized in order to protect the layers beneath as the thickened skin continually peels off. And while a diagnosis of Harlequin ichthyosis once meant a certain death sentence, early intervention and neonatal care have been shown to prolong life.

Once an newborn’s outer layers of thick skin peel off — during which time antibiotics are typically administered to prevent infection – they’re left with dry, red skin. For there on out, it’s a matter of constantly moistening the skin in order to prevent further cracking and infection. For the most severe cases, some doctors also prescribe oral retinoids, which prompt skin cells to die rapidly.

Still, even close medical attention can’t ensure survival. One 2011 study that analyzed 45 cases of the disease found only 56 percent of patients survived.

Nusrit “Nelly” Shaheen, a woman from the United Kingdom, is likely the oldest living person with Harlequin ichthyosis (Diana Gilbert of Bermuda is older, but has a different type of ichthyosis).

Like Shaheen, Mui Thomas has pursued her love of sports despite her condition.

Born in 1984, Shaheen has beaten the odds, living well past the typical life expectancy of someone with the disease. And she has not only survived, but thrived. In 2016, when she was 32 years old, Shaheen was nominated for an award in her hometown of Coventry.

“It is not easy to live with my condition but it is best to stay positive rather than look at the negative side of things,” she said in 2017. “I like to do things, go out and enjoy my life.”

Not only does Nelly just enjoy her life, she has found independence and purpose through her job as a sports coach at a local elementary school in Coventry. And while she has certainly managed to stay a positive force for good for herself and others, she admits that it can be tricky staying confident in a world that cares so deeply about the way someone looks.

“It is hard to be different in this day and time,” she said. “You see all these pictures in the magazine… You don’t see anyone with my condition in the magazine. They want perfect but there is no such thing as perfect.”

And while Nelly’s journey stretches far beyond the standard struggles of simply being human, her search for acceptance, feeling worthy, and feeling beautiful are universal.

Harlequin ichthyosis is a rare disease; only one in 500,000 are affected in the United States, or just seven births annually. And with rarity comes the inevitable insensitivity and cruelness of those who seek to cause pain.

Since filming this segment, Hunter Steinitz has written a play about ichthyosis and graduated from Westminster College in Pennsylvania.

In November of 2019, a woman was arrested after making numerous threats via Instagram, Facebook, and even the GoFundMe page of a New York mother whose toddler, Anna Riley, suffers from Harlequin ichthyosis. But after receiving overwhelming support from friends, neighbors, and strangers, Anna’s mother, Jennie, released a touching statement regarding her Harlequin ichthyosis and her daughter:

“Ichthyosis  is incredibly hard for anybody to live with, and I personally choose to live without hate in my heart. As shocking as this whole thing has been, I pray that instead of getting angry you would choose to make a positive out of this and donate to the foundation for ichthyosis.”

For those living with Harlequin ichthyosis like little Giovannino in Turin, Anna Riley in New York, and Nelly Shaheen in England, every day is a gift. But with any debilitating illness, there is always hope for a cure.

So as modern medicine inches ever forward, bringing new treatments and innovations into the lives of those who suffer, the best any and all can do is offer the ever-constant necessity of love, care, and kindness to those who need it most.