The woman had been suffering from the condition for the past three years, before finally seeking help. 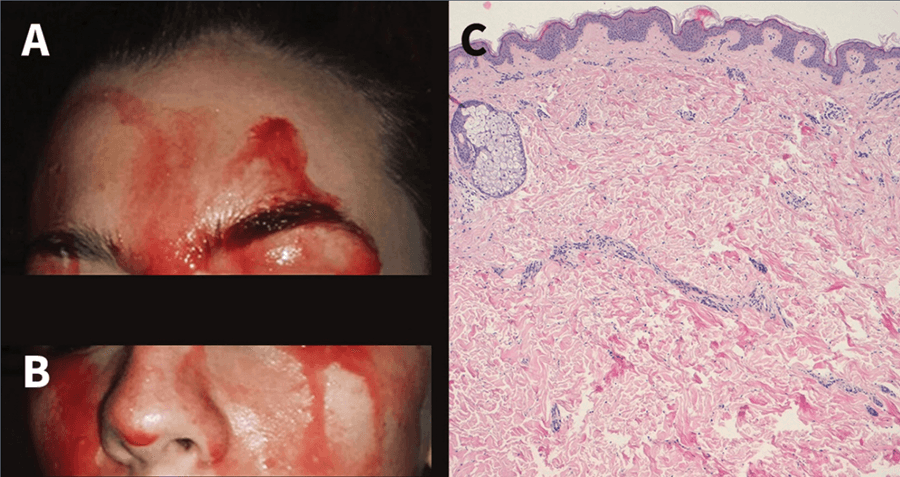 Canadian Medical Association JournalLeft, the Italian woman during an episode, and right, the woman’s skin cells under a microscope.

A woman in Italy has been diagnosed with a rare condition that causes her to sweat blood, according to a new report.

The woman had noticed over the past three years that, despite no visible cuts or lesions, she periodically experienced bleeding from her face and palms. She noticed the condition worsened when she was stressed, and the episodes would typically last one to five minutes.

The new report, published by the Canadian Medical Association Journal, says that after checking the woman into the hospital doctors were able to observe the condition themselves, noting a “discharge of bloodstained fluid from her face.”

The doctors then diagnosed her with hematohidrosis. In cases of hematohidrosis, blood seeps out of unbroken skin, just like sweat, and is most common on the face, ears, nose, and eyes. According to the National Institutes of Health Genetic and Rare Diseases Information Center (GARD), the condition is often associated with fear or stress.

Due to the rarity of the condition, some medical professionals are unlikely to consider it a legitimate medical diagnosis. In the past 13 years, there have only been 28 reported cases of hematohidrosis, and much of the disease is still a mystery to doctors — including the cause.

According to GARD, some researchers theorized that increased pressure on blood vessels leads to the passage of blood cells through the ducts of the sweat glands. Others believe that the condition could be a side effect of the body’s “fight or flight” response. The response generally triggers a release of hormones that increase alertness, however, in some cases it could potentially cause small blood vessels to rupture.

Despite the fact that it’s so mysterious, hematohidrosis has been mentioned, though not by name, for centuries. In the Bible, Jesus is said to have sweat blood. Mentions of bloody sweat were found in the writings of Aristotle, and starting in the 1600s, reports of “eyewitness sightings” of unexplained bloody sweat started popping up in medical journals.

The cause of the Italian woman’s condition has not yet been found, though she was given medication for high blood pressure, which seemed to reduce the bleeding.

Next, read about six of the rarest mental disorders you’ve probably never heard of. Then, check out this team’s research into mass-produced blood.