A photographer captured images of more than 20 polar bears that have moved into the abandoned buildings of a former Arctic weather station on the Russian island of Kolyuchin. 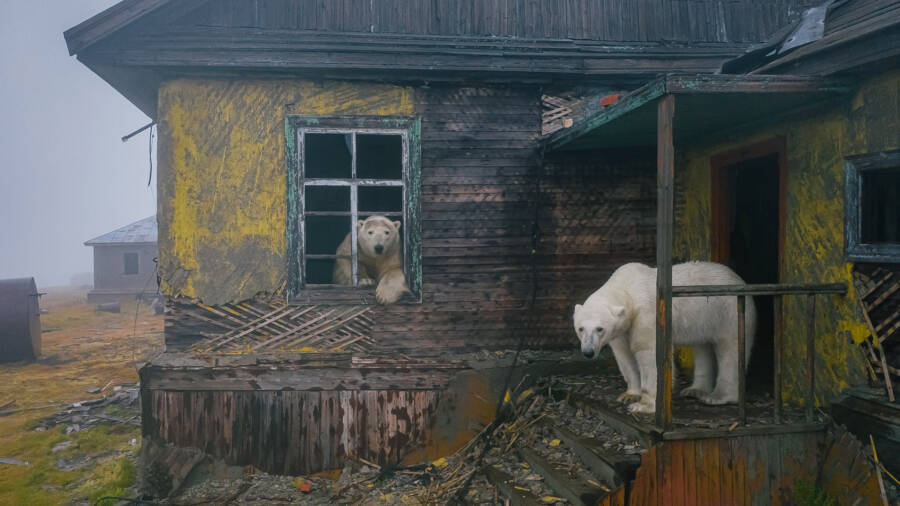 When Russian wildlife photographer Dmitry Kokh finally set sail in August 2021, his seafaring expedition had been two years in the making. He had a lifelong dream to capture polar bears in their natural habitat and traveled 1,200 miles to reach Wrangel Island, a UNESCO-protected sanctuary in the Russian Far East.

But when a storm forced his ship to seek shelter on the tiny island of Kolyuchin to the south, he made the discovery of a lifetime — polar bears had taken over the abandoned Soviet-era buildings on the island and had made it their home for the summer.

According to The Guardian, that tiny little island has long lain abandoned and is mostly known for the arctic weather station shuttered since 1992. Only its dilapidated structures and a ghost town formerly inhabited by Soviet scientists remain. To Kokh’s shock, however, it has since become home to over 20 polar bears.

Using a remote-controlled camera-drone with low-noise propellers, Kokh documented the animals with little disturbance. Unlike Wrangel Island, which is famed for its polar bears, Kolyuchin Island was long thought abandoned. According to Kokh, however, life is full of surprises:

“Nature is always sending you something when you least expect it and when we passed through Kolyuchin Island near the Northern coast of Chukotka, we saw some movements in the windows. And when we got close — those were bears! Never before they were seen in those buildings, so that was a once in a lifetime situation.” 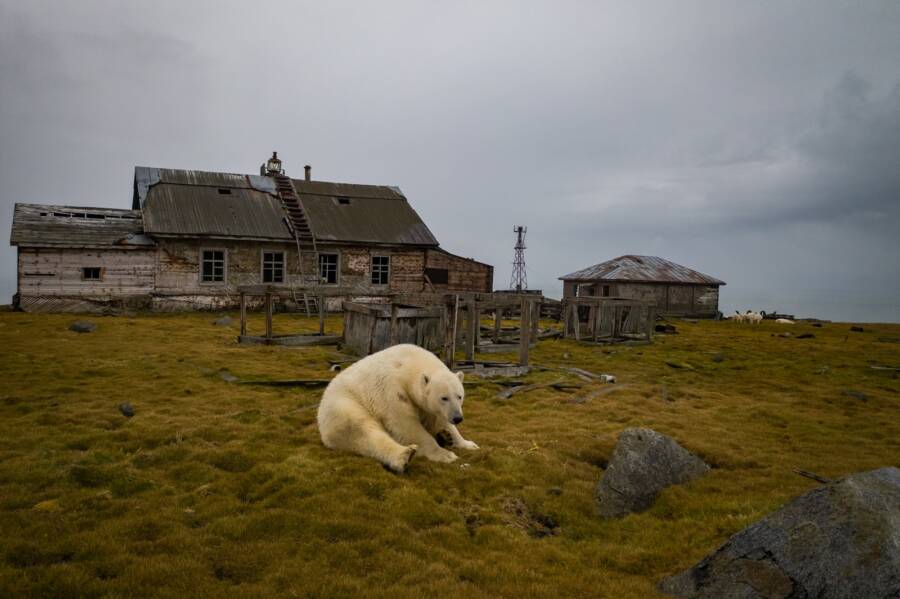 Dmitry KokhThe Kolyuchin weather station was built in the 1930s and shuttered in 1992.

According to LiveScience, the summer had been unseasonably cold when Kokh departed from the northeast provincial capital of Anadyr. And he saw far more sea ice than is typical for the Arctic coastline. He would only realize the full consequences of that on Kolyuchin, however.

Local polar bears typically spend their summers in northern hubs like Wrangel Island and use the sea ice to get there. Biologist Anatoly Kochnev believes that last summer’s colder temperatures, however, had led to more abundant sea ice — and that these flows have stopped traveling north and instead halt near Kolyuchin.

“I always wanted to get some nice shots of polar bears, and that was the main target of our expedition,” said Kokh. “We expected to meet them mostly on Wrangel Island, famous all around the world for being the home for many bears. Not this year.”

After sailing through the Chukchi Sea, encountering humpback whales, and passing through Cape Dezhnev to reach Wrangel Island, an ominous storm began to form. Kokh and his peers docked at Kolyuchin to wait it out when they spotted movement on land — and realized they had already found what they were looking for. 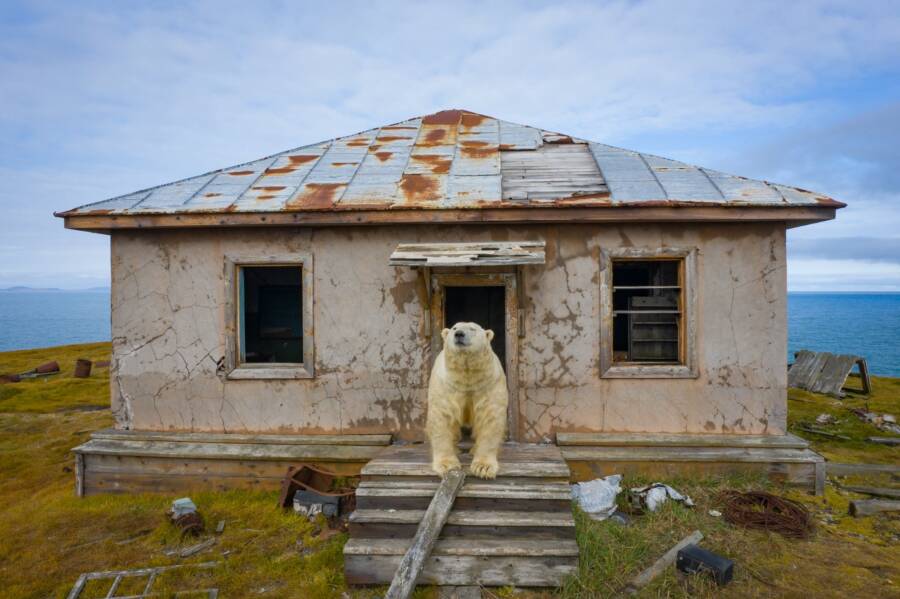 Dmitry KokhAccording to Kokh, the island and its buildings were home at least 20 polar bears.

“We saw one, then we saw another one, then 20 of them,” he said. “And they all were inside this building.”

Despite traveling with a nature reserve employee who was armed with a rifle and flare gun, Kokh stayed on the yacht and filmed the animals with his drone to avoid startling the bears, which can weigh up to 1,700 pounds and run at 25 mph.

“Polar bears are very clever — and sometimes tricky — hunters,” explained Kokh. “Sometimes they pretend they are not looking at you, and they are relaxed; at this moment, they are ready to attack.”

According to The Daily Mail, most of the polar bears were male. The few females had kept to the shorelines with their cubs, while the males had taken up residence within the corroded weather station. Kokh excitedly captured them peering out windows and navigating abandoned Soviet fuel drums littering the outside.

As for why the bears have congregated inside the buildings, Kochnev explained that polar bears are inherently curious creatures and will usually seek to investigate any unlocked door or window. And because the animals were traditionally hunted, they have also learned to use these structures to protect themselves from humans. 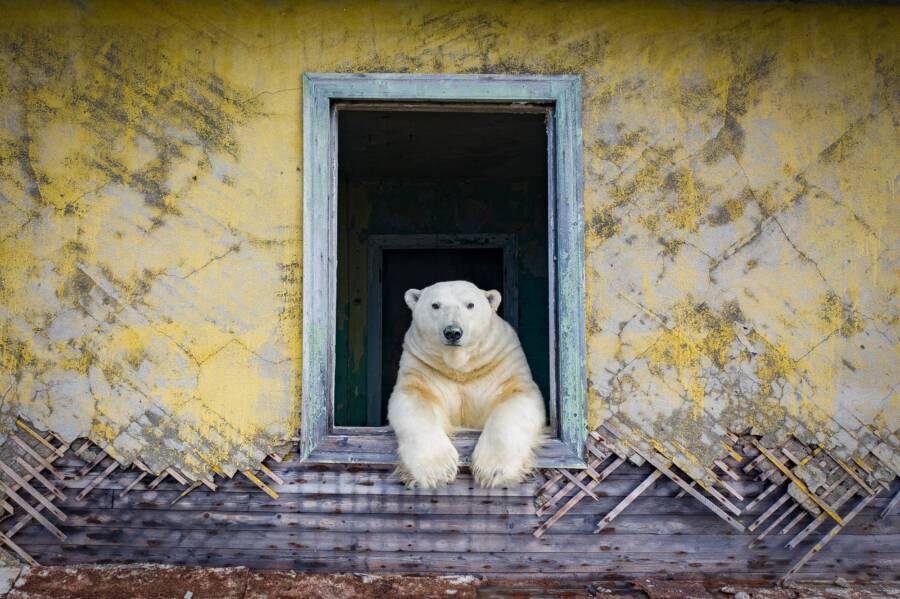 While Kokh completed his expedition and continued to Wrangel Island, he encountered only a sparse population of polar bears there.

The sea ice polar bears depend on for travel and hunting has dwindled and grown precariously thin since 1979. Researchers have warned that summer sea ice, meanwhile, could vanish from the Arctic entirely by the end of this century. In that sense, Kokh hopes to have shared more than mere photos.

“I think that sooner or later all human-made things on Earth will cease to exist. Buildings, cars and computers will all meet their end. But life is eternal. These bears will continue to hunt, swim among ice floes and explore islands even when civilization ceases to exist,” he said.

“But life will remain eternal only if we humans finally begin to take care of the planet and the living creatures that need our protection.”

After reading about the polar bears in an abandoned Arctic weather station, take a look at 35 eerie photographs of abandoned malls. Then, check out 9 abandoned castles that are still glorious in their decay.