For thousands of years, accused criminals were subjected to being pressed or crushed to death, most famously during the Salem Witch Trials of 1692. 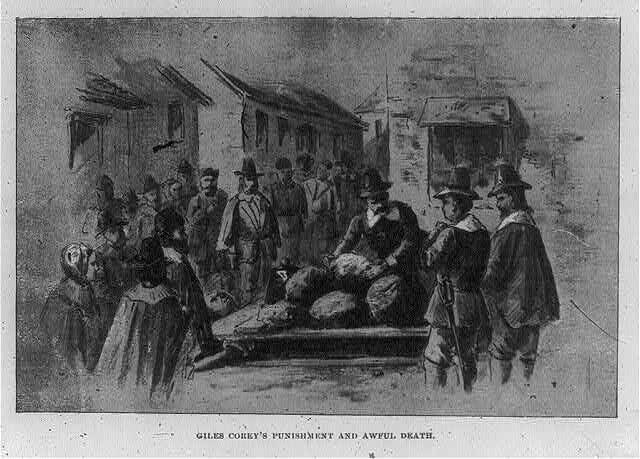 Library of CongressIllustration of Giles Corey being pressed to death.

If you were sentenced to death by crushing, or getting pressed to death, you were in for an excruciating end. While strapped down, you would have intense weight placed upon you, bit by bit, until the weight literally crushed you to death.

But whether the weight was applied by a human or a pachyderm, the result was still the same.

Pressing To Death Was Practiced In Almost Every Country

In Southeast Asia — especially throughout India — crushing was practiced by elephants. The last recorded use of the practice was in 1914. The Carthaginians and ancient Romans used the practice, as well, with the latter remarking that elephants were preferred to lions and bears because they were more “intelligent” and easy to train.

But in Britain, the practice was used as torture. Whereas their Southeast Asian and Carthaginian counterparts would use the practice for a convicted criminal, England preferred to impose the sentence on the accused who refused to plead guilty or not guilty. It was the court’s hope that with enough pressure — literally — they would enter a plea.

After all, the process could be stopped with a simple cry of “not guilty.” But any refusal to do so would result in continuous weight being applied on the suspect’s chest — to the point that the victims would suffocate, have their bones snap inside their bodies, and even have bone shards pierce the skin.

For many, though, surrender was not an option. Death was a preferable alternative to pleading to a crime that he or she didn’t commit. And there was no better example than the lone example of crushing, or getting pressed to death, used in the United States, during the Salem Witch Trials.

Giles Corey Is Pressed To Death

In 1692, Giles Corey was a successful farmer in the town of Danvers, Massachusetts, about 30 minutes north of Boston. Unfortunately for Mr. Corey, he was swept up in the flurry of accusations made by local women of various bewitchings and specter visitations.

Accusations were often made against folks who weren’t well-liked in the community, and Corey — being a convicted criminal after having beaten an apple thief to death — fell into that category. All in all, about 200 people were accused of witchcraft, including Corey himself.

A special court was convened to handle the influx of accusations, and Corey went on trial. At that point, he had two options: He could either enter a plea, standing a strong chance of being convicted in the kangaroo court, or not enter a plea at all and refuse to stand trial. Corey also knew that if he chose the latter, the court would order him to be pressed in hope that he would enter a plea. It didn’t matter to Corey — he chose the latter, and decided to stand strong and die with his dignity intact, while also allowing his living relatives to keep his land.

The Massachusetts Historical Society has a gruesome description of what happened next.

Giles was asked to strip naked and lay down, face-up, on the ground. A wooden board was then placed on top of him, and on top of the board, one by one, Sheriff George Corwin placed large rocks. After two days of this torture, through which Giles had remained silent, never crying out, he was asked to plead. Giles did not want his property to be taken, so he never plead either way. On the third day 19 September 1692 he died from being pressed to death.

His last words were, “more weight.” Corey’s death by pressing ultimately helped change the way the Salem Witch Trials were viewed by locals.

The so-called “Enlightenment age” of England brought about a new view of the practice of crushing. While the practice was legal in the early part of the 18th century, it was finally outlawed in 1772.

But even with the merciful end to the practice, there was a catch. In making pressing illegal, a prisoner who refused to enter a plea was automatically deemed guilty, equivalent to a conviction. Therefore, the accused’s property could no longer be kept “in the family.”

In England, a convicted criminal was subjected to forfeiture — that is, the Crown could take any lands that the criminal owned, thus leaving their family destitute. But previously, if the accused had died during the horrific process of being crushed or pressed to death, the family was able to keep their property.

Now that you’ve read all about the ghoulish reality of being pressed to death, read all about Ted Bundy’s death — including his last words, his last meal, and his method of execution. Then, take a look back at the disturbing practice of gibbetting.