A revolutionary hero of the 1960s, Bobby Seale cofounded the Black Panther Party for Self-Defense and bravely stood with the Chicago 7 against the Vietnam War.

During the 1960s, Bobby Seale was far from a passive idealist. The African American activist worked tirelessly to change the political landscape, from co-founding the Black Panther Party to protesting the Vietnam War at the 1968 Democratic National Convention in Chicago.

While under intense surveillance by the FBI’s infamous COINTELPRO program, Seale was arrested in the wake of the Chicago riots. Though he was far from the only activist who organized the antiwar protests, he was ultimately tried separately from the Chicago Seven — a group of his white activist peers. 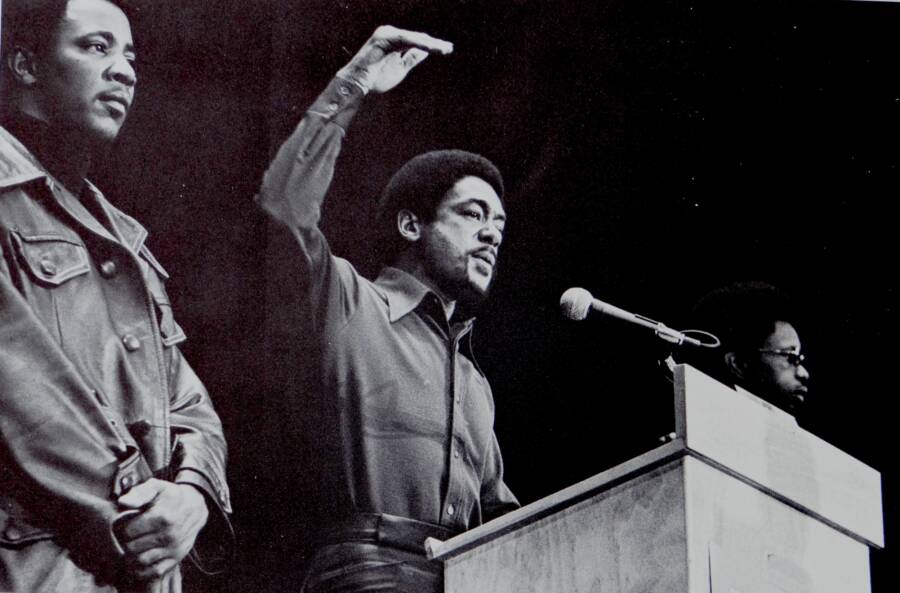 His anger at being denied self-representation in court saw Seale bound, gagged, and chained to his chair during his trial. While Aaron Sorkin’s Netflix movie The Trial of the Chicago 7 is sure to dramatize these events, the true story of Bobby Seale and his role in the Chicago Seven is even more riveting.

Born Robert George Seale on October 22, 1936, in Dallas, Texas, Seale was raised in poverty and a volatile household. As the oldest of three children, he learned the value of guardianship by navigating his physically abusive father.

Seale’s family lived in various cities across Texas before ultimately settling in California. He attended Berkeley High School, where he first became interested in politics. He joined the U.S. Air Force in 1955 but was discharged just a few years later after an altercation with a superior officer.

In 1959, Seale returned home to work odd jobs and attend Merritt College in Oakland, California. “I wanted to be an engineer when I went to college, but I got shifted right away since I became interested in American Black History and trying to solve some of the problems,” he later recalled.

In the early 1960s, he met a fellow student named Huey P. Newton — with whom he’d later form the Black Panther Party.

Both men were passionate about learning Black history in school as well as confronting the ongoing issue of police brutality against African Americans. And Seale’s fervor only deepened when he attended a speech by Malcolm X in the early 1960s. 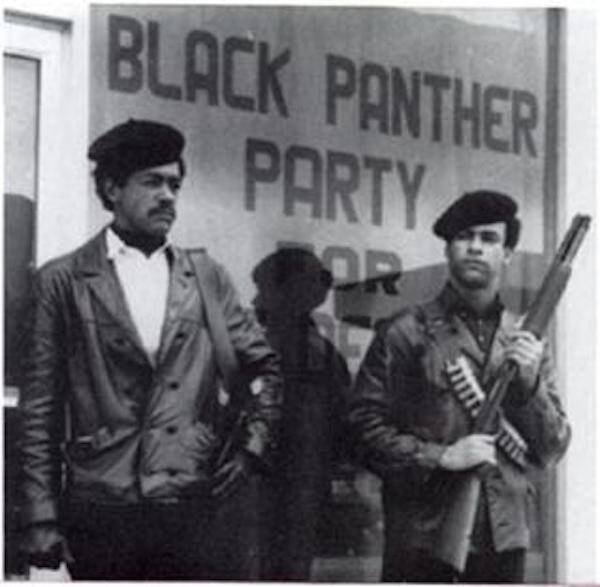 Wikimedia CommonsBobby Seale and Huey Newton on patrol with a Colt .45 and a shotgun.

In the wake of Malcolm X’s assassination in 1965, Seale and Newton were ready to put together their beliefs and form their own political organization. Originally called the Black Panther Party for Self-Defense, this organization was founded in 1966 for the purpose of monitoring police activities in Black communities.

Bobby Seale and Huey Newton outlined the party’s views and objectives in a “Ten-Point Program” that called for an end to police brutality, employment for African Americans, and housing for all, among other things. As the Black Panther Party created social programs and became engaged in more political activities, chapters popped up all across the country.

“On the one hand, the guns were there to help capture the imagination of the people,” said Seale. “But more importantly, since we knew that you couldn’t observe the police without guns, we took our guns with us to let the police know that we have an equalizer.”

The Black Panthers differentiated themselves by rejecting the nonviolent approach of other civil rights groups. They also refused to echo the “Back to Africa” teachings that were becoming increasingly popular at that time. 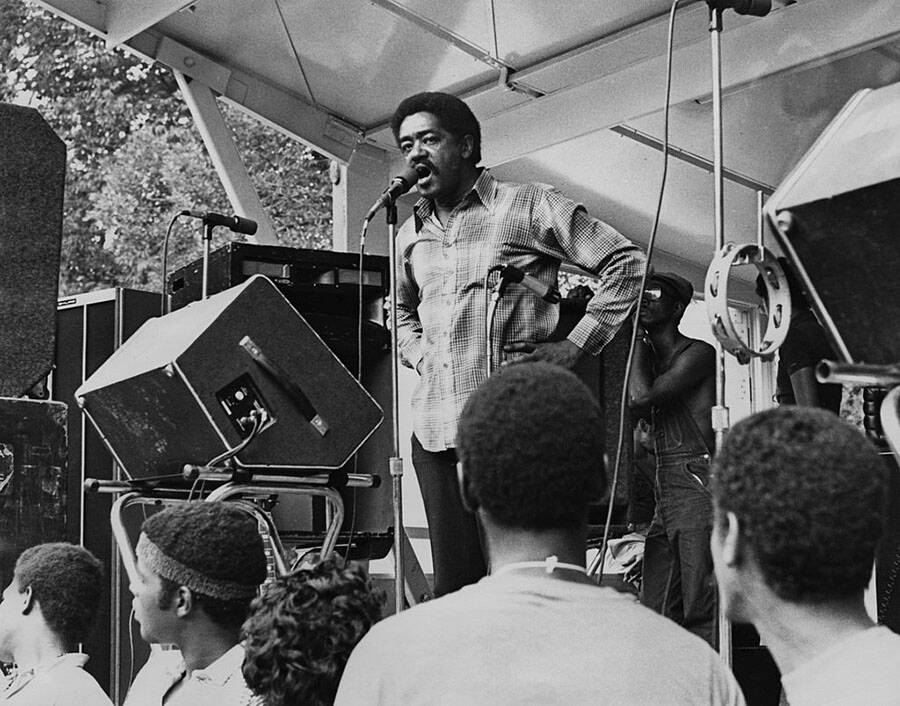 By the late 1960s, Seale was also speaking out against the Vietnam War, especially since the U.S. Army was trying to draft Black soldiers who were still fighting for their own rights at home.

In 1968, Seale took to the streets of Chicago to protest the war — and walked straight into American history.

The True Story Of The Chicago Seven

In August 1968, the Democratic National Convention was held in Chicago. Many activists saw this convention as an opportunity to protest the Vietnam War.

The three-day event at Chicago’s International Amphitheater was specifically held to find a new Democratic nominee after Lyndon B. Johnson announced that he wouldn’t seek re-election. So activists across the country flocked to the Windy City to demand that this new nominee should be antiwar. 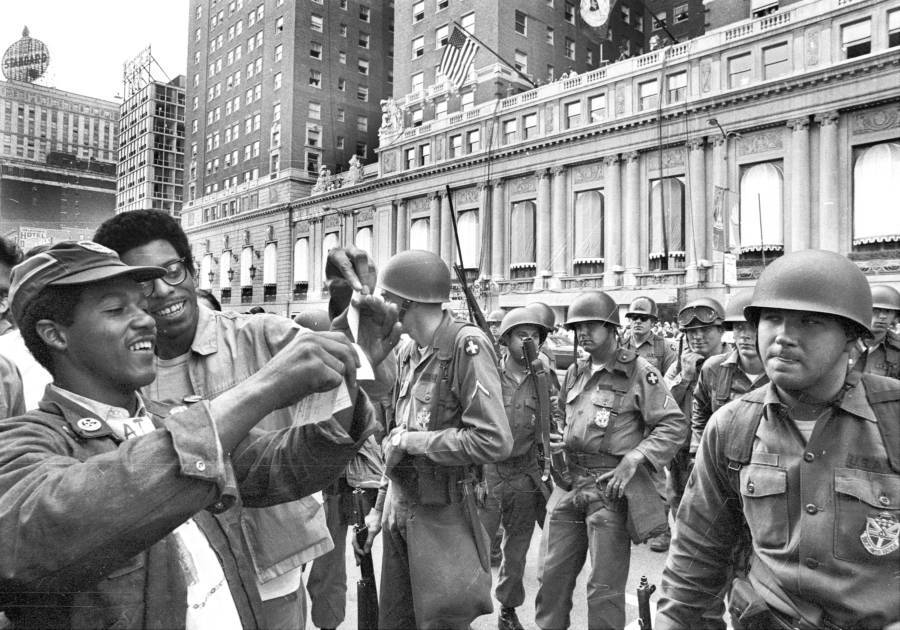 Unfortunately, the clashes between police and civilians saw countless people injured. Hundreds of demonstrators were arrested, with estimates ranging between 589 and 650.

The evidence against these men was slim, and it was mostly based on meetings that some of the defendants had called months before the demonstrations began. But the charges against the men were a big deal. As it turned out, crossing state lines to incite a riot had just become a federal crime under provisions of the 1968 Civil Rights Act.

To make matters worse, Seale had only agreed to participate in the demonstration as a last-minute replacement for another Black Panther who couldn’t make it. He was furious at the charges he was facing.

“You have did everything you could with those jive lying witnesses up there presented by these pig agents of the government to lie and say and condone some rotten racists, fascist crap by racist cops and pigs that beat people’s heads — and I demand my constitutional rights,” Seale said in the courtroom.

A Democracy Now interview with Bobby Seale about the infamous trial that saw him bound and gagged.

Unable to silence him, Judge Julius Hoffman ordered Seale bound and gagged on Oct. 29, 1969. As Seale sat squirming and attempting to speak through the gag placed tightly around his mouth, defense attorney William Kunstler said, “This is no longer a court of order, Your Honor, this is a medieval torture chamber.”

Shortly thereafter, Judge Hoffman separated Bobby Seale’s trial from the remaining seven defendants, thus renaming them the Chicago Seven. This separation earned Seale a conviction for 16 acts of contempt. As a result, he was sentenced to 48 months in prison.

“To be a revolutionary is to be an enemy of the state,” he reportedly said from prison. “To be arrested for this struggle is to be a political prisoner.” 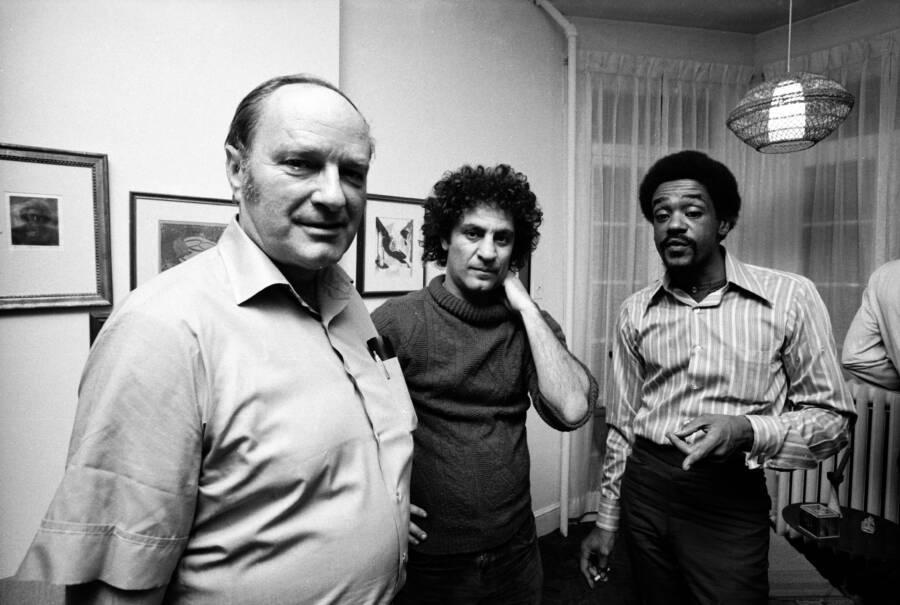 Just one year later, while serving his sentence for contempt, Seale was put on trial for the murder of a fellow Black Panther.

Bobby Seale Is Framed For Murder 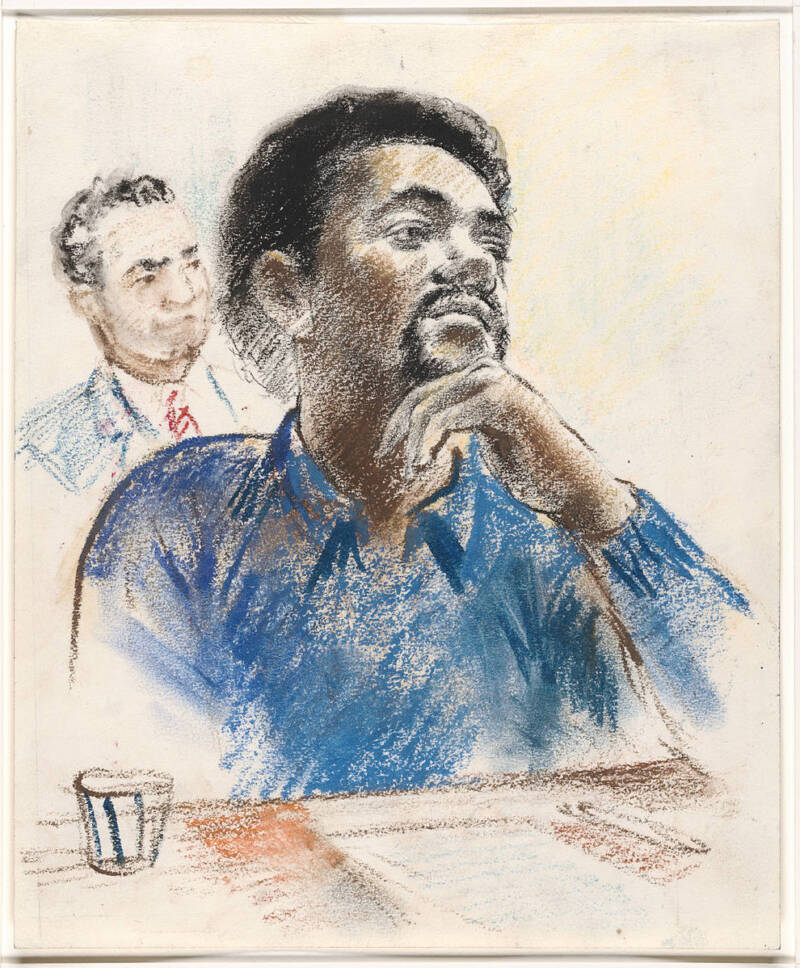 Wikimedia CommonsA court sketch of Bobby Seale on trial in 1970.

Suspected to be an FBI informant, Rackley was kidnapped by Kimbro, McLucas, and Sams in New Haven, Connecticut in 1969. After taping Rackley’s two-day torture and interrogation, the three Panthers shot and killed him.

As for Seale and Huggins, they were accused of ordering the murder in the first place. Huggins was a local party leader, and Seale had been in town to speak at Yale the day before the murder.

While police obtained an audio tape of Huggins interrogating Rackley at one point, they had very little evidence tying the murder to Seale. Ultimately, the six-month trial ended in a hung jury. And no new trial took place. 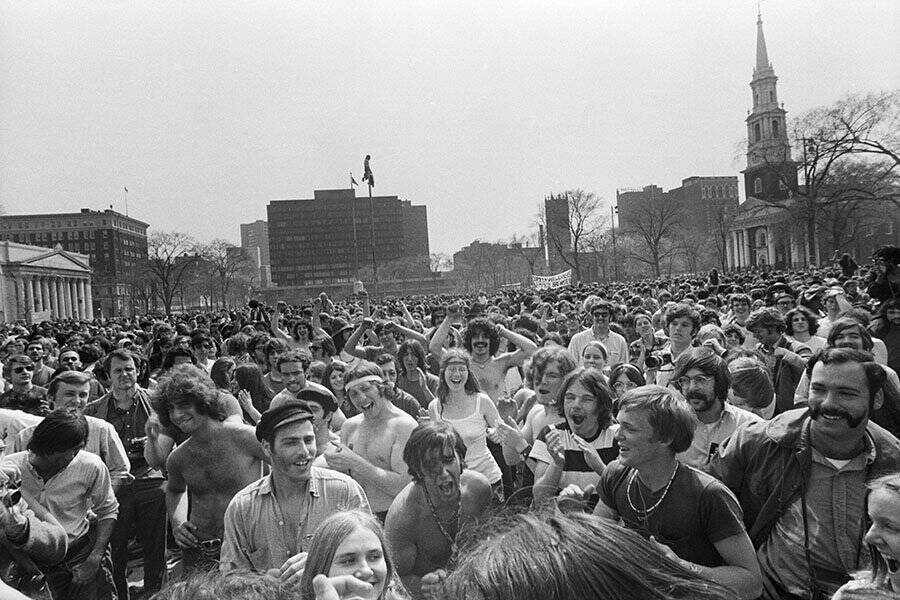 Getty ImagesSeale galvanized a generation, as evidenced by the Yale University protests during his 1970 murder trial.

Aside from the New Haven Black Panther trials, Bobby Seale was also implicated in the murder of another Black Panther, Fred Bennett, after rumors flew that he impregnated Seale’s wife while Seale was still in prison. However, Seale was never charged.

By 1972, the contempt charges against Seale were dismissed and he was released from prison. 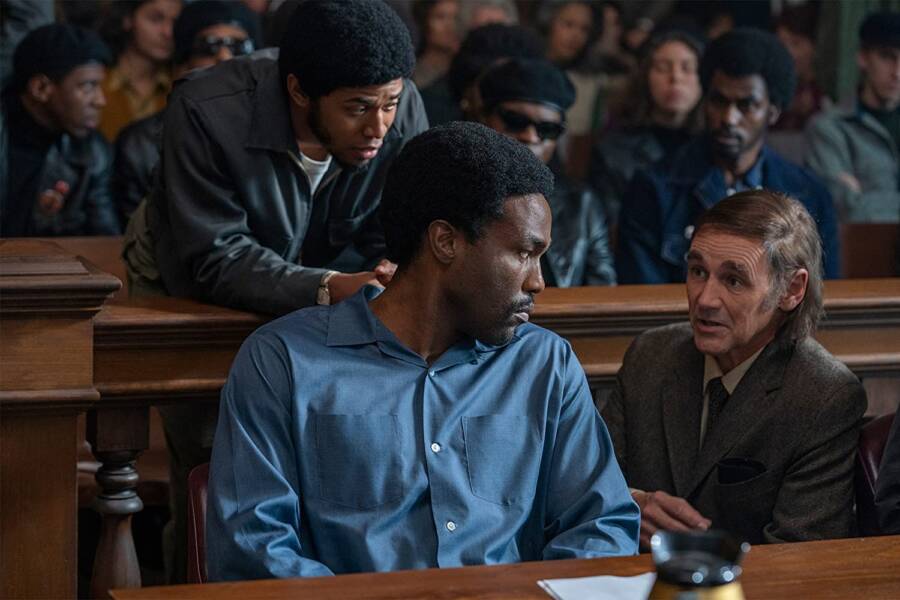 NetflixYahya Abdul-Mateen as Bobby Seale in The Trial of the Chicago 7.

After Bobby Seale was released from prison, he renounced violence as a means to an end. He also expressed interest in working within the political system. He even ran for mayor of Oakland in 1973. Though he lost, he received the second-most votes out of nine candidates.

While Seale attempted to reorganize the Black Panthers, the group had largely fallen apart while he’d been in prison. By 1974, Seale had ended his affiliation with the group.

His later years saw Seale pivot to the life of an author and public speaker. He occasionally still gives speeches to this day.

But despite breaking with the Black Panthers, Seale still looks back with pride in his activism back in the day, especially fighting for the end of police brutality. And he laughs when he thinks of how then-California Gov. Ronald Reagan called him a hoodlum in the late 1960s.

“I’m an engineer, I’m a carpenter, I’m an architect, I’m a jazz drummer, I’m an expert barbecue cook,” he said. “I am not a hoodlum. I’m a community organizer.”

The Trial of the Chicago 7 is the latest film to chronicle part of Seale’s life’s work, but nothing could come close to the intensity of the true story.