Christina Booth, The Troubled Mother Of Three Who Tried To Kill Her Babies

After slashing the throats of her two-year-old and six-month-old twins in 2015, Christina Booth chillingly told investigators she’d done so in an attempt to "quiet" them for her husband. 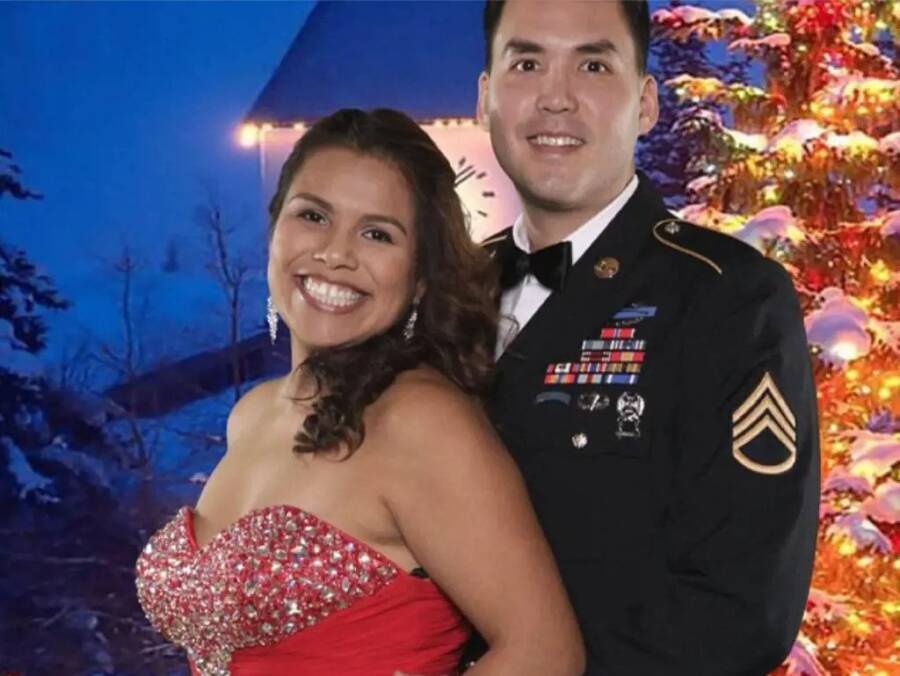 FacebookChristina Booth, pictured with her husband Thomas, pleaded guilty to attacking her three children and was sentenced to 14.5 years in prison.

On a winter’s night in 2015, Christina Booth settled in for a movie with her husband, Thomas. But their movie night turned into attempted murder when, at the end of the film, Christina slashed the throats of their three young daughters in an attempt to make the them stop crying.

Christina Booth later told the investigators that her husband, a soldier, got “annoyed” when the children cried, and that she attacked their two-year-old daughter and six-month-old twins to keep the house “quiet.”

Her story, though, has more than meets the eye. A young Army wife, Christina Booth suffered from severe PTSD relating to traumatic events from her own childhood, and she struggled with postpartum depression.

This is what happened to Christina Booth’s babies in Olympia, Washington, in 2015 — and how their lives have developed since.

According to The Olympian, Christina Booth’s adopted mother, Karla Petersen, testified that Booth had witnessed the rape and murder of her biological mother when she was just two years old, then endured neglect and abuse in a series of foster homes.

Booth joined Petersen’s family at the age of four, but not before she’d been severely traumatized. Petersen explained that Booth was diagnosed with PTSD at a young age and later struggled with postpartum depression in her teens when she gave birth to a son.

Despite her traumatic beginnings, Booth struck many people as “bubbly.” She eventually married Thomas Booth, a soldier, and soon became pregnant with their daughter. 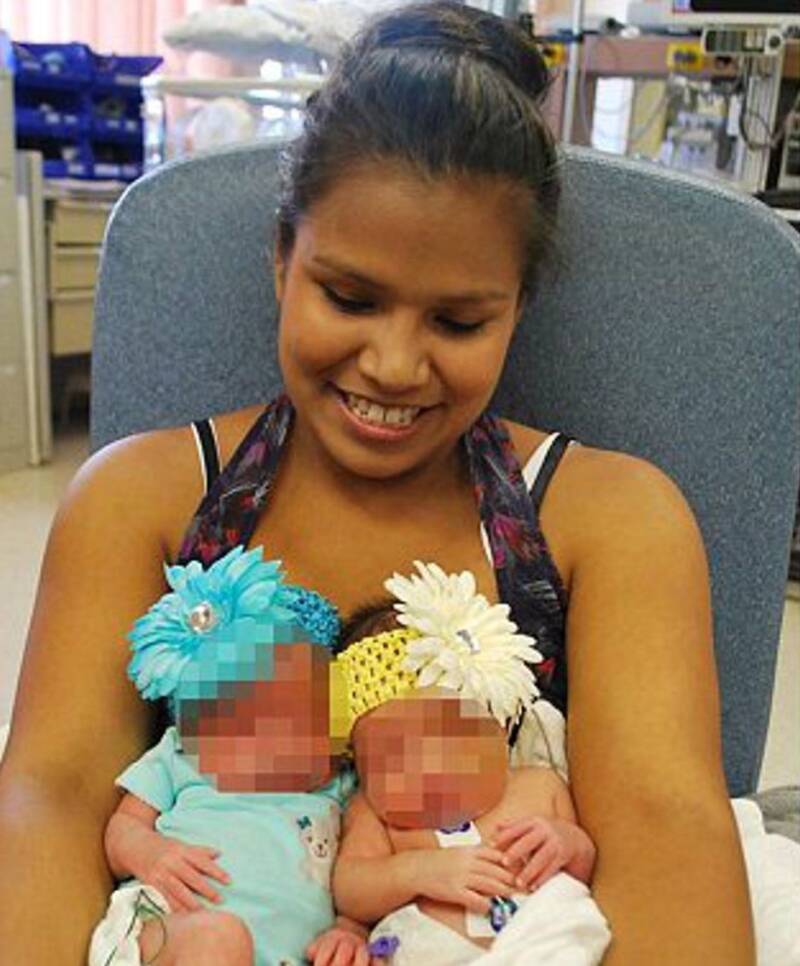 FacebookChristina Booth and her twin babies after their birth in 2014.

After the twins’ birth in 2014, Christina’s neighbors in Olympia, Washington, started to notice a change in her personality. They told KOMO News that Christina been sweet and vivacious, but suddenly seemed withdrawn.

“Once the babies came, they just didn’t come out much at all,” her neighbor Tammy Ramsey told KOMO.

Still, no one predicted what Christina Booth would do in January 2015.

On Jan. 25, 2015, Christina Booth and her husband, who had returned from his second deployment in Afghanistan around the time the twins were born, settled in for a movie and wine night.

People reports that Christina and Thomas both had two large glasses of wine, and that near the end of the movie Christina got up to put their two-year-old to bed.

But as Christina tried to put the child to sleep, the twins started to cry. The 28-year-old then went downstairs and retrieved a knife from the dishwasher. She returned to her children and slashed the twins’ throats, before turning the knife on her two-year-old and slashing her throat.

As Thomas told police, he didn’t realize anything was wrong until Christina reappeared in her underwear, screaming and crying. He found the injured twins and treated them with his medical kit — initially not noticing that the two-year-old was also injured and covered with a blanket — and shouted at his wife to call 911. 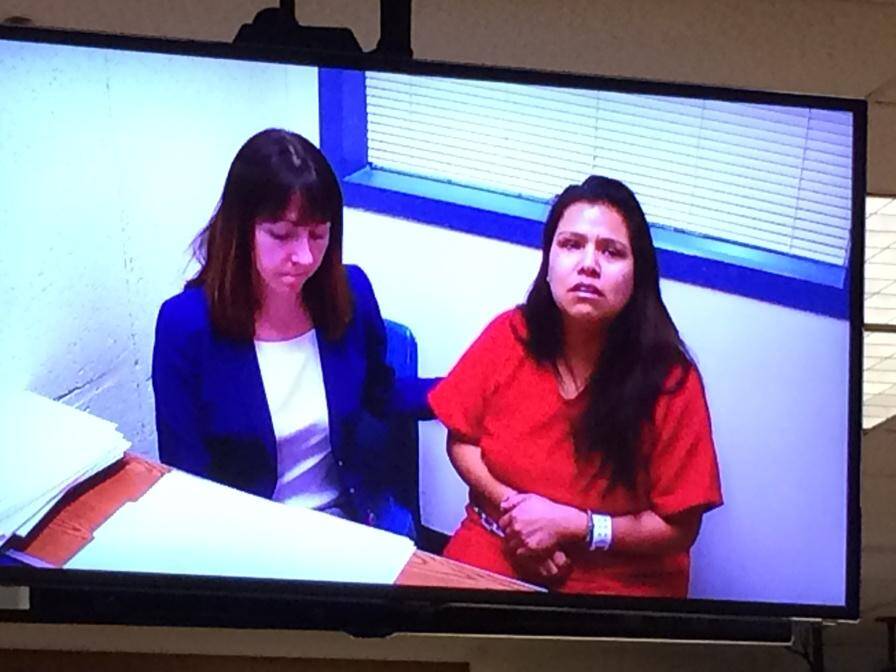 TwitterNeighbors later reported that Christina Booth had become withdrawn after the birth of her twins.

“My babies won’t calm down,” Christina Booth told the 911 operator, neglecting to mention that she’d also slashed their throats. “I’ve breastfed them, I’ve formula fed them, they are not calming down.”

Then Thomas got on the phone and pleaded with the operator to send an ambulance. He explained that the twins were bleeding from the neck and that he didn’t know what had happened to them, as Christina screamed in the background that she didn’t want them to die.

Medics soon arrived and took the children to the hospital, where doctors saved their lives.

‘They Will Be Quiet Now’ 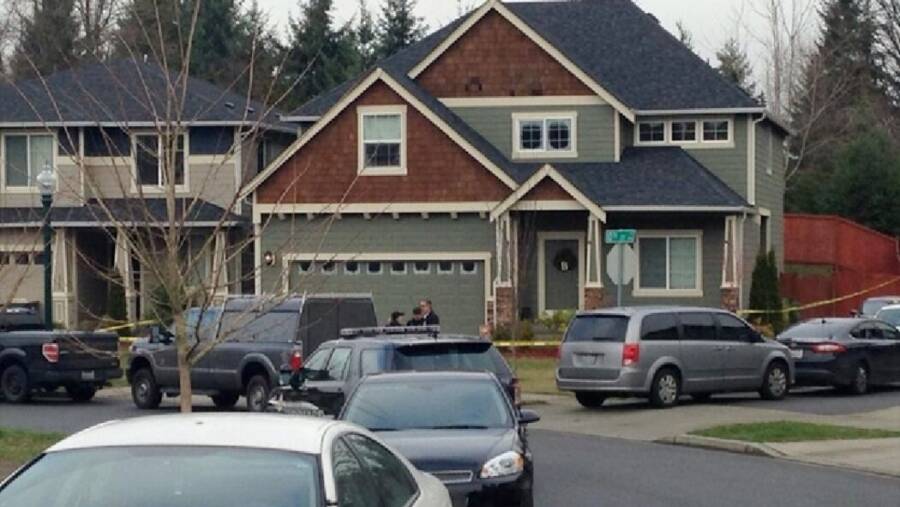 KOMO NewsPolice at the Booth household after Christina Booth attacked her three daughters in January 2015.

Christina told police that she was having “really rough time” as a mother. She said that she’d hit her “breaking point” when the twins started crying and explained that “she knew if she killed all the kids the house would be quiet for Thomas,” according to a probable cause filing.

“During the interview, Christina broke down crying several times, yelled about Thomas never helping with the kids, and vomited once,” the document said. “Christina made the comment ‘they will be quiet now’ several times.'”

Thomas Booth also told investigators that Christina had been “very stressed out” and that she was taking medication for postpartum depression. He also noted that she was intoxicated after drinking two glasses of wine and that she’d been “slurring her words” by the time she got up to put the children to bed.

The next morning, Booth’s neighbors expressed shock when they learned what Christina had done to her daughters.

“I would have never suspected that she would be a person to take this kind of a drastic action,” neighbor Tiffany Felch told KOMO News. “I can’t imagine what stress she must have been under to cause her to do such a thing.”

Felch added: “I can’t imagine having three [children] under two. I’m sure she was going through a lot.”

But to Karla Petersen, Christina Booth’s adoptive mother, it seemed clear what had happened. Later testifying about how Booth had suffered a relapse of PTSD after the birth of her twins, Petersen said, “I think she acted out of desperation that night. She became that scared little girl again.”

Where Are Christina Booth’s Babies Today?

Following the attack on Jan. 25, 2015, the Spokesman-Review reports that Christina Booth was charged with three counts of first-degree attempted murder while armed with a deadly weapon, charges that could have resulted in a life sentence. To avoid trial, Christina later pled guilty to lesser charges and was sentenced to 14 years and 6 months in prison.

“I hate myself very much,” Booth said during a court hearing in December 2016. Calling the night she attacked her daughters the worst night of her life, adding, “I’m disgusted with myself, I’m not going to forgive myself.”

During the same hearing, Thomas testified in defense of his wife’s character. He called Booth “kind, sweet, and loving” and insisted that she’d never been violent before. He told the court that their children — living under his full custody — were in good condition and that he would stand by his wife.

For now, not much else is known about Christina Booth. Though her husband and adoptive mother asked that she be allowed visits with her daughters, the prosecution disagreed, and Booth has been out of the spotlight ever since entering jail.

But her loved ones want people to know that there’s more to the story than meets the eye.

After reading about Christina Booth, see how eight-year-old Christie Downs survived after her mother shot her and her siblings because her new boyfriend didn’t want children. Or, see how Devonte Hart went viral for hugging a police officer — then was killed by his adoptive mother.