The Sordid Story Of Geri McGee, The Showgirl And Hustler Immortalized In ‘Casino’

Known as Ginger McKenna in Martin Scorsese's Casino, the real-life Geri McGee married casino boss Frank Rosenthal and had an affair with mob hitman Tony Spilotro in the 1970s — then her story ended in tragedy. 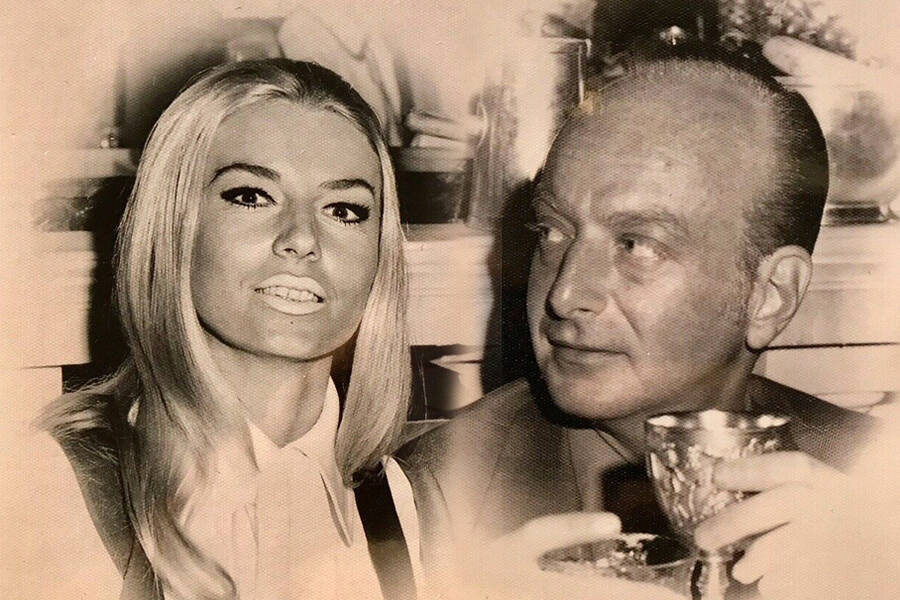 TumblrGeri McGee and Frank “Lefty” Rosenthal had a tempestuous relationship that led to constant fighting and the two nearly killing each other.

Geri McGee loved money — obtaining it, spending it, flaunting it. She was a Vegas showgirl and a hustler at a time when everyone in Vegas was in on a hustle. She also happened to marry one of Vegas’ most notorious and controversial figures: Frank “Lefty” Rosenthal, the casino king who built an empire and then lost it all.

Like her film counterpart, McGee made a living hustling and gambling, and eventually having an affair that would end her unhappy marriage to Rosenthal — after a public altercation during which she waved a chrome-plated gun around outside her and Rosenthal’s house.

Geraldine McGee’s life ultimately came to an untimely end when she was just 46 years old, found heavily drugged in the lobby of the Beverly Sunset Hotel with a lethal combination of cocaine, valium, and whiskey that killed her three days later.

Officially, her cause of death was an accidental overdose — but some theorize that she may have been murdered because she knew too much about the Vegas underworld. After all, the mob had already tried to kill her ex-husband.

From Rags To Riches In Las Vegas

Geri McGee grew up in Sherman Oaks, California, the daughter of a chronically ill mother and a tinkerer father who worked in gas stations. She and her sister, Barbara, often took on odd jobs as kids to help make ends meet; all of their clothing was handed down by neighbors.

“We were probably the poorest family in the neighborhood,” Barbara told Esquire. “Geri hated it more than anything.”

Shortly after graduating from Van Nuys High School, McGee began working as a clerk at Thrifty Drugs, which she quickly realized she didn’t care for. Not long after, she took a job at the Bank of America. Not liking that job either, she took a position at Lockheed Martin.

Around 1960, however, McGee married her high school sweetheart, with whom she had a daughter, and moved to Vegas.

“When Geri first got to Las Vegas, around 1960,” Barbara said, “she was a cocktail waitress and showgirl.” Eight years later, though, Barbara’s husband walked out, and she moved in with McGee for a time. Apparently, she learned, Geri’s time in Vegas had been well spent.

“She had everything,” Barbara said. “She had blue-chip stocks. She had saved her money.” 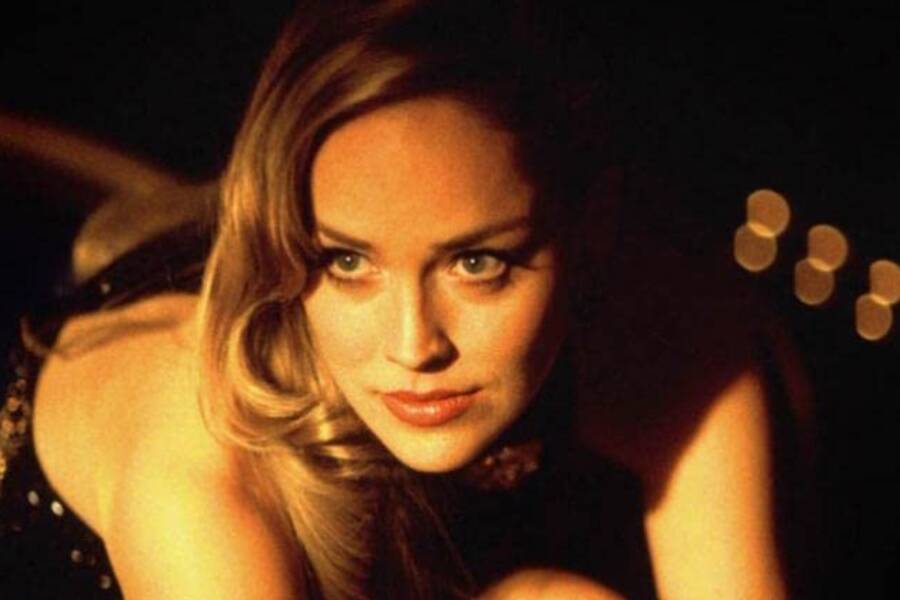 Universal PicturesSharon Stone in 1995’s Casino. Her character, Ginger McKenna, was lauded as an accurate portrayal of Geraldine McGee.

“Everybody loved Geri because she spread money around,” said a former valet worker named Ray Vargas. “I mean, everybody in Las Vegas who’s got any brains is on the hustle. Nobody lives off their paycheck parking cars or dealing cards.”

It was during this time, while hustling and dancing, that Geri McGee caught the eye of one of Vegas’ most prominent figures: Frank Rosenthal.

“She was the most beautiful girl I ever saw,” Rosenthal recalled. “Statuesque. Great posture. And everyone who met her liked her in five minutes. The girl had fantastic charm.”

And thus began their tempestuous romance.

“Geri was in love with money,” Frank Rosenthal recalled of his late wife. “I had to give her a two-carat heart-shaped diamond pin just to get her to start dating me.”

The two met while McGee was still working as a Tropicana showgirl, but she stole Frank’s heart at a casino, after he watched her hustle a blackjack player with such powerful elan that a room full of men were diving to the floor to pick up chips for her.

“At that point,” Rosenthal said, “I can’t take my eyes off her. She’s standing there like royalty. She and I are the only two people in the whole casino who aren’t on the floor. She looks over at me and I’m looking at her.”

To say Geraldine McGee was popular among Vegas high rollers would be an understatement. As her sister Barbara told it, McGee had a number of suitors all looking to take her hand in marriage — but many of them lived in New York or California, and she didn’t like the idea of leaving Vegas. 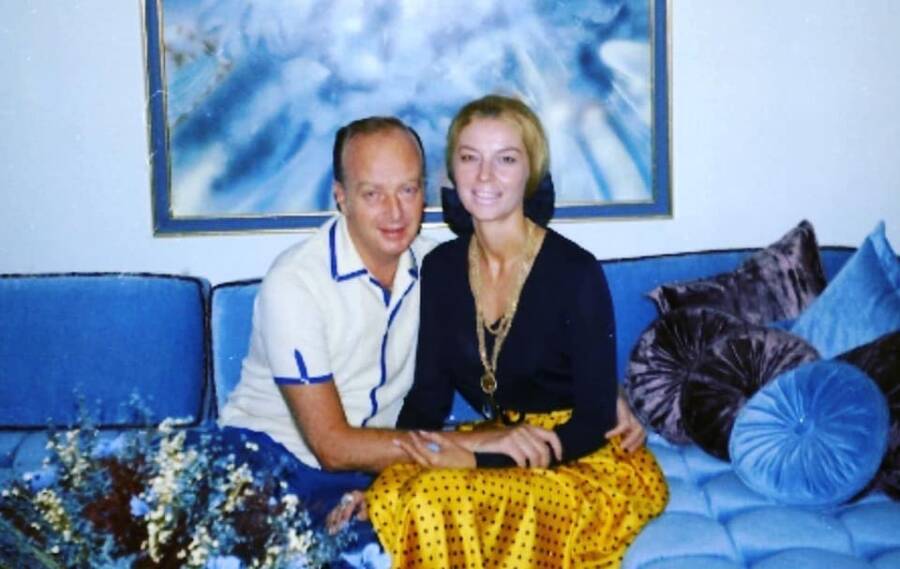 The Mob MuseumFrank Rosenthal and Geri McGee Rosenthal had two children, Steven and Stephanie, together, but their marriage was anything but happy.

One day, a friend of McGee suggested that she just marry Frank Rosenthal. After all, he was rich and made his home in Vegas.

According to The Mob Museum, Rosenthal and McGee were married in May 1969 — a lavish ceremony at Caesar’s Palace with 500 guests dining on caviar, lobster, and champagne.

“There was never any question,” Rosenthal later said. “I knew Geri didn’t love me when we got married. But I was so attracted to her when I proposed, I thought I could build a nice family and a nice relationship. But I wasn’t fooled. She married me because of what I stood for. Security. Strength. A well-connected fellow.”

Not long after, McGee quit her job at the Tropicana, and the couple welcomed their son Steven into the world. Unfortunately, it seemed the domestic life Rosenthal wanted for his wife didn’t suit her nature.

The not-so-happy couple argued frequently, with McGee accusing her husband of having affairs and Rosenthal accusing her of drinking too much and taking too many pills. Sometimes she would be out until the early hours of the morning; other times, she wouldn’t come home for the weekend.

Rosenthal hired private investigators to keep tabs on his wife, and eventually threatened to divorce her unless she stayed home and had a second child. When they had their second child together, a daughter named Stephanie, it depressed McGee even more.

“Being forced to have a child and for that child to be a girl—a girl in competition with her daughter Robin—made Geri very upset.,” Barbara McGee told Esquire. “She could never warm to Stephanie. And I don’t think she ever forgave Frank for making her go through the second pregnancy.”

Eventually, their tumultuous relationship reached a boiling point, and when Frank Rosenthal’s old pal from Chicago came to Vegas, it marked the beginning of an affair that would finally split Frank and Geri up.

Anthony “The Ant” Spilotro grew up in Chicago not far from Lefty Rosenthal’s house and had made a name for himself in the criminal underworld as a loan shark, a shakedown artist, and a hired killer.

His notoriety, however, made Chicago a bit too hot for comfort, and so he asked his old friend Frank Rosenthal if he could stay with him in Vegas for a time. Rosenthal agreed, but it also got the FBI breathing down his neck. And with Spilotro referring to himself as Frank’s “advisor” and “protector,” the two became inextricably linked.

Then, one day, Rosenthal returned home to find his wife and son missing, and his daughter tied by her ankle to her bed with a clothesline. That’s when he got a call from Spilotro saying he was with McGee, and that she wanted to talk about their issues.

Rosenthal met them at a bar, found his wife completely drunk, and took her home with a warning from Spilotro to be gentle with her.

“She’s only trying to save your marriage,” he said. 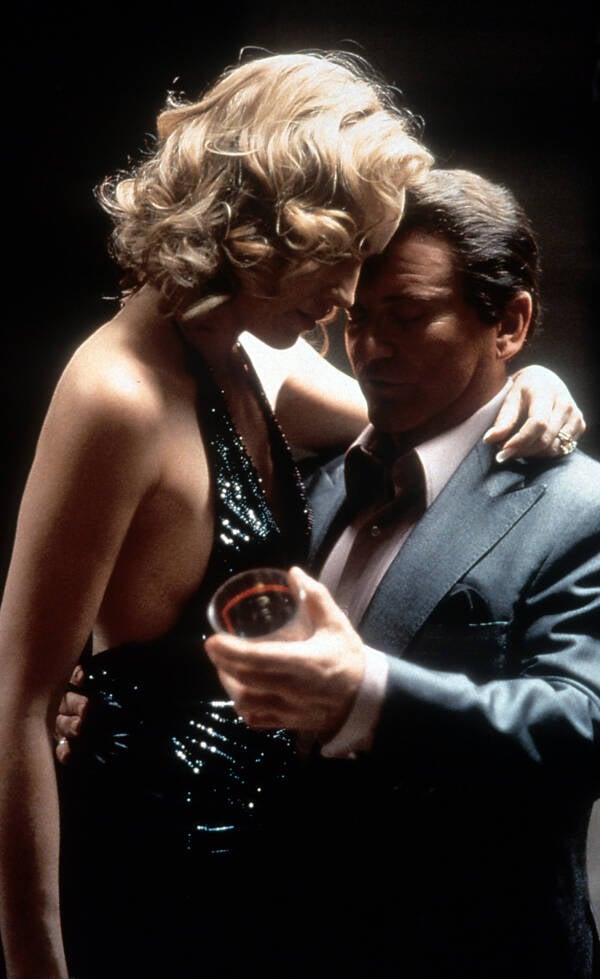 But Rosenthal’s various affairs, his abusive nature, and his domineering control over his wife only drove the couple further apart. Eventually, he caught on that McGee was looking for connection elsewhere.

“Look, Geri,” he said to her, “the best thing is for me to tell it the way it is. I feel you’ve been with somebody. I know it. We both know it. I just hope it wasn’t with one of two guys.”

“What two?” she asked. His answer: Tony Spilotro or Joey Cusumano.

When McGee admitted to her affair with Spilotro, Rosenthal flew into a rage. And when her affair continued, he began to divide up their belongings, and filed for divorce. But not only had his marriage failed — Rosenthal had also now made an enemy of his old friend, Tony Spilotro — and Spilotro wasn’t afraid of getting his hands dirty.

As The New York Times reported, the real dangers of the situation became apparent on Oct. 4, 1982, when Rpsenthal had finished eating dinner with a few of his circle. He got back in his car, ready to take some food home to his kids, but as soon as he started the engine, the car blew up.

Rosenthal survived the explosion, but the message was clear: Someone wanted him dead.

And only a few weeks later, just after their divorce was finalized, Geraldine McGee collapsed in the lobby of the Beverly Sunset Motel in California. Her legs were bruised. She had drugs, booze, and tranquilizers in her system.

She died three days later in a nearby hospital, only 46 years old. The cause of her death was never solved, but the doctor who pronounced her dead couldn’t rule out foul play — perhaps Geri McGee’s past finally caught up with her, or perhaps she was just another victim of a dangerous time in Vegas’ history.

After reading about the turbulent relationship between Frank Rosenthal and Geri McGee, learn about the infamous duo of Sid Vicious and Nancy Spungen. Then, read about another real gangster from Casino, Frank Cullotta.