Inside Life On Migingo Island, The Bustling Half-Acre Rock In Lake Victoria

Though it’s only half the size of a soccer field, Migingo Island is home to some 500 people, making it one of the most densely populated places on Earth. 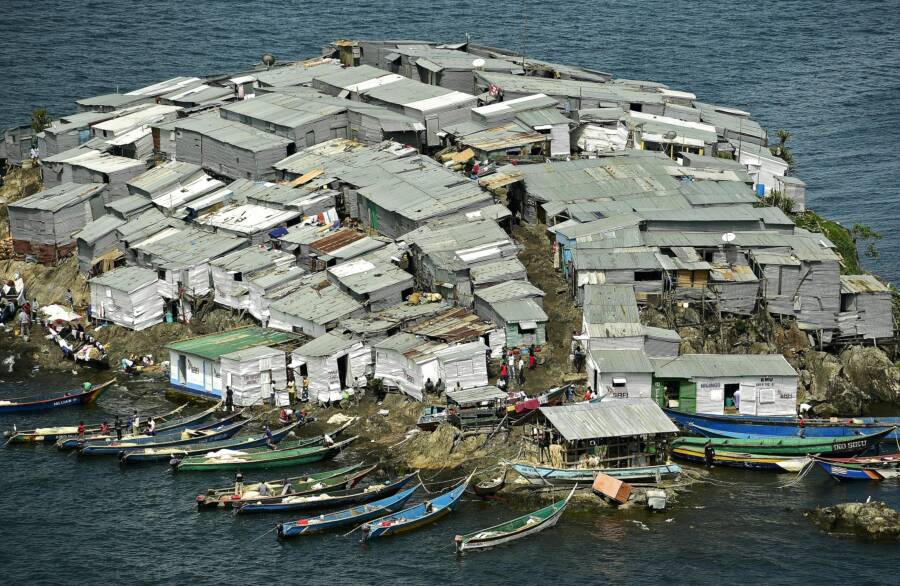 Carl De Souza/AFP/Getty ImagesThe bountiful fishing atoll has been fought over by Kenya and Uganda for decades.

The African continent is vast and diverse, with over 11 million square miles of luscious jungles, thriving cities, and arid deserts. As the oldest inhabited continent on Earth, there’s no shortage of rich histories to be found. For the tiny tin shack atoll of Migingo Island, that history is one of territorial strife.

Migingo Island measures barely half an acre and is merely an outcrop of rocks. Nonetheless, it sits on Lake Victoria, which is the largest tropical lake on Earth and prime real estate for catching profitable Nile perch. It was barely inhabited until the 2000s but now hosts as many as 500 fishermen from Kenya and Uganda vying for space.

That population growth was accompanied by heavy territorial disputes. With Kenya and Uganda sharing Lake Victoria, their valid claims to the land saw Africa’s “smallest war” erupt in 2009. As it stands, Migingo Island is a phenomenon to behold — with bars, brothels, and a labyrinth of makeshift homes defining its society.

While the fight over Migingo Island might appear trivial, both Kenyans and Ugandans are well aware that resources mean everything. Alongside Tanzania, fishing communities on Lake Victoria have seen massive reductions in their fishing catches in recent years — while the waters around Migingo Island are rich with Nile perch.

The History Of Migingo Island

Migingo Island didn’t even exist until the early 1990s, when the waters of Lake Victoria began to recede and revealed the outcrop for the first time. It slowly emerged as one of three atolls jutting out next to each other, with Usingo Island a Tanzanian territory and Pyramid Island within Kenya’s borders. 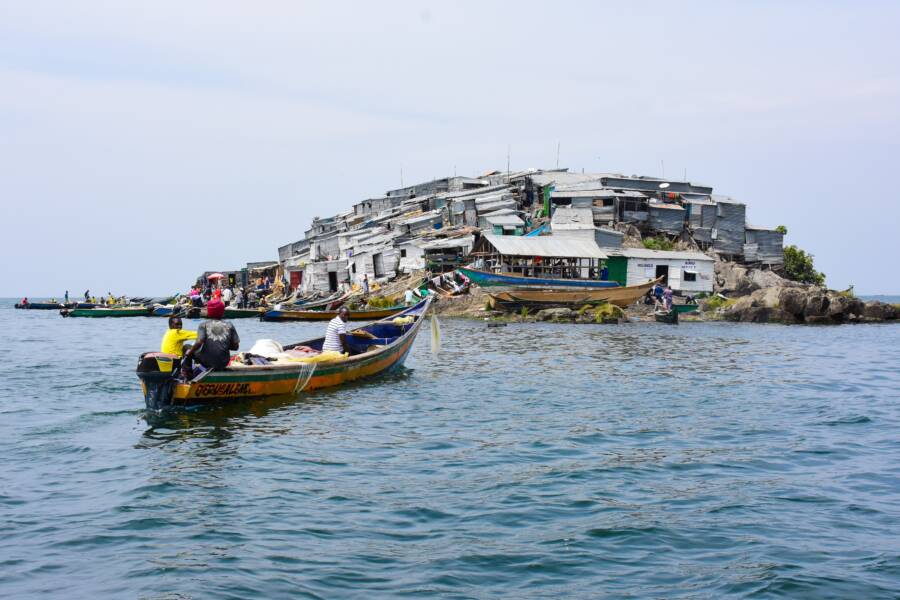 While Ugandan fisherman Joseph Nsubuga remains the earliest settler on record, he claimed that there was already an abandoned house on the island when he moved to Migingo in 2004. Nsubuga said that traveling to the Kenyan mainland from Migingo takes two hours by speedboat, while Uganda is six hours away.

While that would bolster Kenya’s claim on the island, the issue had only just begun to emerge in the early 2000s. As Migingo’s population grew, so did the attention of Ugandan authorities. They began sending security forces in 2009 to tax Kenyan fishermen and offer paid protection against pirates.

Ultimately, life on the island saw fishermen work during the day and employ the services of prostitutes arriving from Kenya by night. In the meantime, however, tensions began to grow.

The Battle Over Migingo Island

The Ugandan government staked its claim over Migingo by using colonial maps from 1921. Kenya pointed at a different set of maps that showed otherwise and said the island was fully populated by members of its Lio community. While that statement appeared inaccurate, the island certainly was closer to Kenya than Uganda.

“I do not know which country this belongs to, I just stay here,” said Isaac Buhinza, a Ugandan fisherman.

The 2009 dispute found each nation launching a $2 million survey to put matters to rest. When a preliminary report in March deemed the island Kenyan territory, Ugandan forces temporarily withdrew but ultimately returned — as the more bountiful fishing part of the island lay on the Ugandan side. 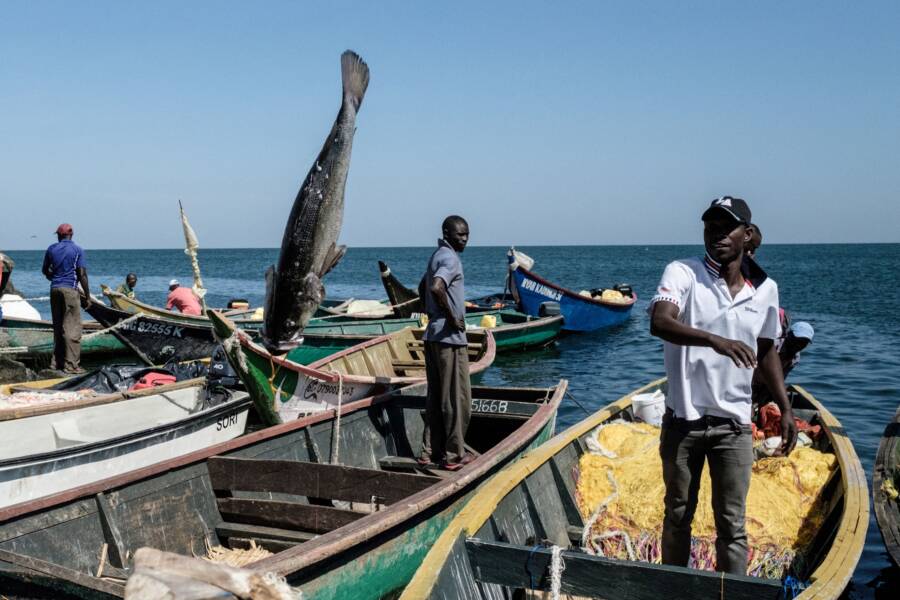 In 2016, an agreement from a joint commission by both nations seemed to indicate progress. It allowed Ugandans to cross over to Kenya for food and medical supplies while Kenyans were free to sail in Ugandan territory. It also stipulated an equal number of police officers from each country had to be present at all times.

Ultimately, tensions resumed when Uganda replaced the Kenyan flag on Migingo with its own. When Kenyan electoral officials began registering Migingo residents for the 2017 election, Ugandan forces ordered them to stop and confiscated the equipment. Kenyan officers were also reportedly assaulted by their counterparts. 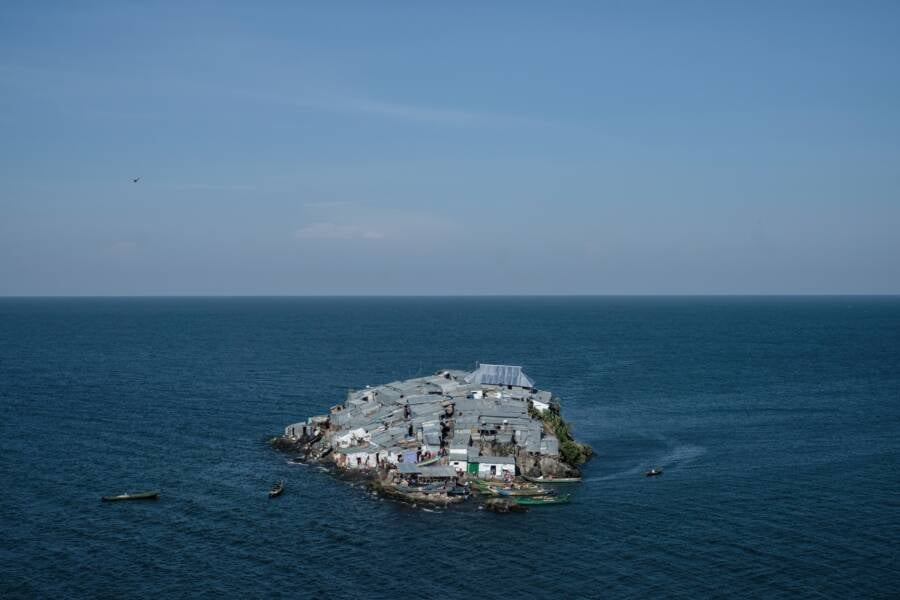 Yasuyoshi Chiba/AFP/Getty ImagesTensions on Migingo Island have yet to fully cease.

“What matters now is not about the claims by either side, but the need to demarcate the place properly so that the border lines are clear,” said Patrick Mugoya, the permanent secretary of Uganda’s foreign ministry.

Even after each nation signed a peace agreement to co-manage the island on June 26, 2018, Ugandan police stormed Migingo and yet again lowered the Kenyan flag. Tragically, the rise of overfishing, climate change, and cultural differences are likely to see this conflict continue.

“These are all political issues and we just want to sell our fish,” said Kenyan fisherman Emmanuel Aringo.

After learning about Migingo Island, read about Poveglia Island where Venice sent its plague victims to die. Then, learn about the Brazilian island so heavily infested with snakes that humans aren’t allowed.