The 2,000-year-old room likely housed a family of three whose daily responsibilities included tending to their master's horses and ceremonial chariot, which were previously discovered nearby. 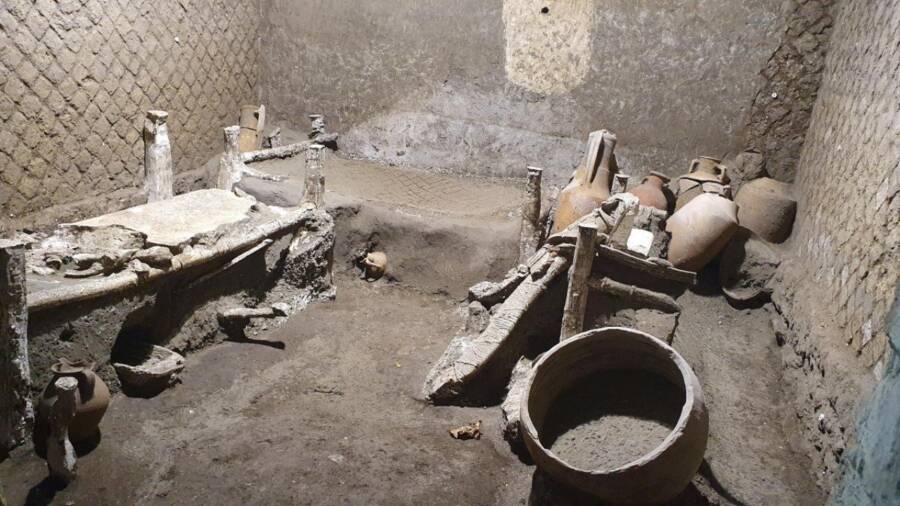 Pompeii Archeological Park/Ministry of Cultural Heritage and Activities and TourismThe room measures only 172 square feet and doubled as a storage room for fine wines and spices.

In 79 AD, Mount Vesuvius erupted in Pompeii. Its fiery rage spared no one — neither rich nor poor. Now, a recently discovered “slave room” on the outskirts of town is shedding light on how enslaved people in Pompeii lived.

“This new important discovery enriches our understanding of the everyday life of the ancient Pompeians,” explained Dario Franceschini, Italy’s Culture Minister. “Especially that class in society about which little is still known.”

Archeologists came across the 172-square-foot room while exploring a villa called Civita Giuliana just north of Pompeii’s city walls. There, they found three beds made of ropes and planks, ceramic jugs, and a chamber pot. Just a single, small window allowed light into the space.

Several other finds suggest that the room was also used for storage. Archeologists also uncovered a chariot shaft and a wooden chest containing objects that could have been used for horses’ harnesses.

Previously, archeologists have made similar discoveries at Civita Giuliana. Since 2017, they’ve come across a ceremonial chariot and a stable that contained the haunting remains of three harnessed horses.

Clearly, then, Civita Giuliana belonged to someone wealthy. And for the archeologists exploring the site, the slave quarters constitute an “exceptional find.” 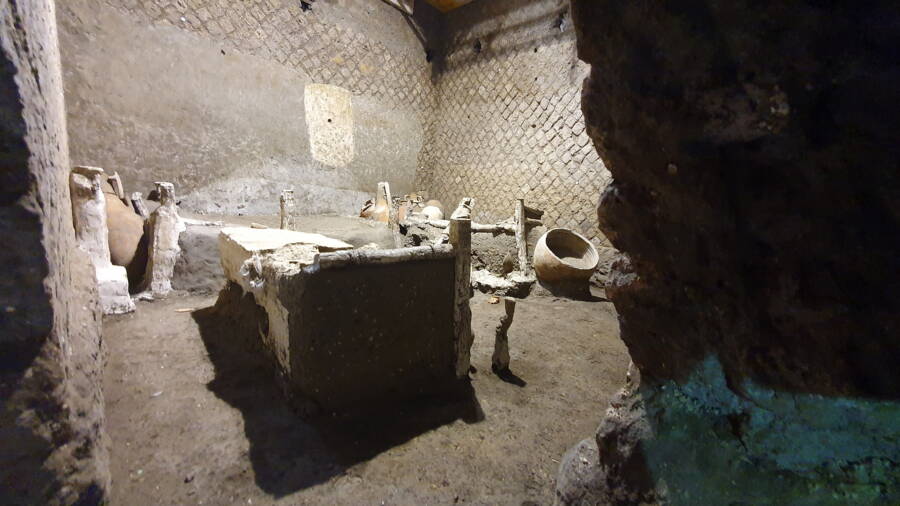 Pompeii Archeological Park/Ministry of Cultural Heritage and Activities and TourismThe small room was found immediately next to horse stables and a ceremonial chariot.

According to Gabriel Zuchtriegel, the director of Pompeii’s archaeological park, the recently discovered room offers a rare peek “into the precarious reality of people who seldom appear in historical sources, that were written almost exclusively by men belonging to the elite and who as a result risk remaining invisible in the great historical accounts.”

Though they may not often appear in stories about ancient Rome, enslaved people were commonly found throughout the Roman Empire. Considered property and nothing more, their masters could beat, brand, and even kill them without facing punishment.

Most of the people enslaved during this time were foreigners, often prisoners of war or captured sailors, or those who had been bought and sold outside Roman territory. Sometimes, they were the children of Romans sold for money.

But both enslaved and free people living in Pompeii met the same fate in 79 AD when Mount Vesuvius erupted. On Aug. 24 of that year, the powerful volcano pummeled the town of 13,000 with volcanic ash and pumice stones.

“People covered their heads with pillows, the only defense against a shower of stones,” Pliny the Younger wrote of the catastrophic eruption. “A dark and horrible cloud charged with combustible matter suddenly broke and set forth. Some bewailed their own fate. Others prayed to die.” 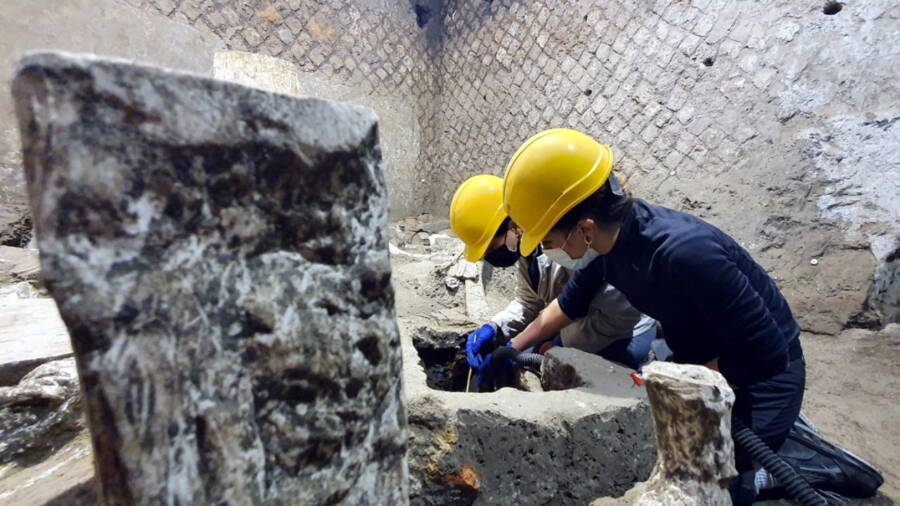 Pompeii Archeological Park/Ministry of Cultural Heritage and Activities and TourismArcheologists working in the Pompeii slave room.

By the time the dust settled, Pompeii had become a graveyard. Some 2,000 people in town had perished and the eruption may have killed as many as 16,000 in total.

Today, the city seems frozen in time. The falling ash from the initial eruption has preserved bodies, artwork, and rooms like the one discovered at Civita Giuliana. Each says something about what life — and death — was like in the doomed city.

In that way, the slave room is an exceptional discovery indeed. According to Zuchtriegel, it’s one of the most significant finds of his career.

“[The slave room] is certainly one of the most exciting discoveries of my life as an archaeologist, even without the presence of great ‘treasures’,” Zuchtriegel said.

“The true treasure here is the human experience – in this case of the most vulnerable members of ancient society – to which this room is a unique testimony.”

The slave room may not look like much. But it represents a small piece of the much larger history of the Roman Empire. What’s more, it offers a tantalizing — if tragic — look at what life was like for Roman slaves in the doomed city of Pompeii.

After reading about the slave room discovered in Pompeii, learn about the skeleton family in Pompeii found huddled together. Or, look through these haunting photos of preserved bodies found in Pompeii.