The Bizarre But True Story Of Military Dolphins

Earlier this year, the Russian Ministry of Defense put out a call for five bottlenose dolphins. They sought three male and two female dolphins between the ages of three and five with faultless teeth and impeccable motor skills. According to Fortune, Moscow’s Utrish Dolphinarium sold the Russian government five dolphins for $26,000.

This marks the first time that the Russian government has publicly expressed any interest in military dolphins since the fall of the Soviet Union, when it lost its militarized sea mammal facility in Crimea to Ukraine. After the 2014 annexation of Crimea, the facility would fall back into the Kremlin’s hands.

Unfortunately for Russia, Ukraine didn’t want to keep paying for these military dolphins. In 2000, the BBC writes that Ukraine offloaded them as well as their trainer, Boris Zhurid, to Iran. Nobody outside Iran knows what happened to the Soviet-trained dolphins since then. 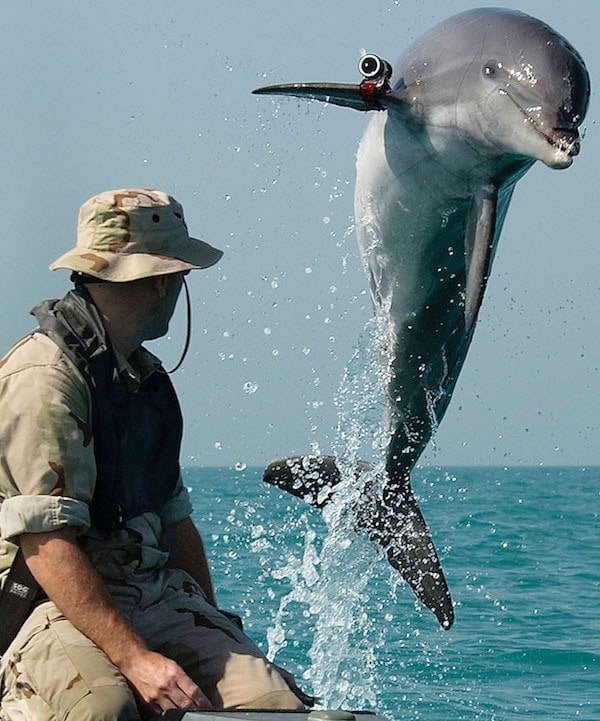 K-Dog, a bottlenose dolphin, leaps out of the water while training near the USS Gunston Hall. Photo by Brien Aho/U.S. Navy/Getty Images

According to the BBC, these Soviet sea mammals did not just know how to identify bombs; in fact, Zhurid trained them to kill. Soviet handlers trained dolphins to attack enemy divers with harpoons strapped to their backs, or with hypodermic syringes loaded with carbon dioxide. Alternatively, trainers taught these dolphins how to drag enemies to the surface for capture. They also served as unwitting kamikaze pilots: Trainers would affix bombs to the dolphins, such that when the neared a ship’s hull, the bomb (and the dolphin) would explode.

Allegedly, Soviet dolphins could even distinguish between foreign and Soviet submarines by the propeller noise. The U.S. Navy says that’s impossible, and cites these sort of logistical problems as one of the reasons why they never trained dolphins to kill.

At least, officially. Despite the U.S. Navy’s consistent, fervent denials that handlers have ever trained American military dolphins to kill, The New York Times reported in 1990 that — despite a Navy spokesman specifically denying the charge — former Navy trainers told them that dolphins were being taught “to kill enemy divers with nose-mounted guns and explosives.”

In a report dated a year before, Richard O’Barry, a former Navy officer turned activist and critic of the Navy program, told The New York Times that the CIA had approached him and asked if he would teach dolphins how to plant explosives on ships. O’Barry says he turned them down.

Whether the U.S. trained killer dolphins or not, Navy SEALs still had to learn how to fight the threat of weaponized Soviet dolphins. Former Navy SEAL Brandon Webb describes one such training exercise in his memoir, writing that trainers used the dolphins:

“to track down enemy divers, outfitting them with a device strapped onto the head that contains a [simulated] compressed gas needle . . . Once the dolphin has tracked you down, it butts you; the needle shoots out and pokes you, creating an embolism [lethal air or gas bubble] . . . Within moments, you’re dead.”

On his blog, Webb would later post a message he received from anonymous former Navy dolphin trainer. This missive would state that yes, the Navy did indeed train these mammals to kill. “The dolphins would have their simulated CO2 system attached to their nose, they would then ram us in the chest cavity to simulate the injection,” the note says. “The dolphins could kill just with this force alone (we had to dive with special padding) but the idea was to recover the bodies and any intelligence.”

As ugly as this business was, the history of weaponized dolphins contains at least one bright spot: The former Soviet dolphins had a few nice years before Ukraine sold them to Iran in 2000. With the Cold War over, nothing better to do, and no one to murder underwater, the killer dolphins provided swimming therapy for disabled children. 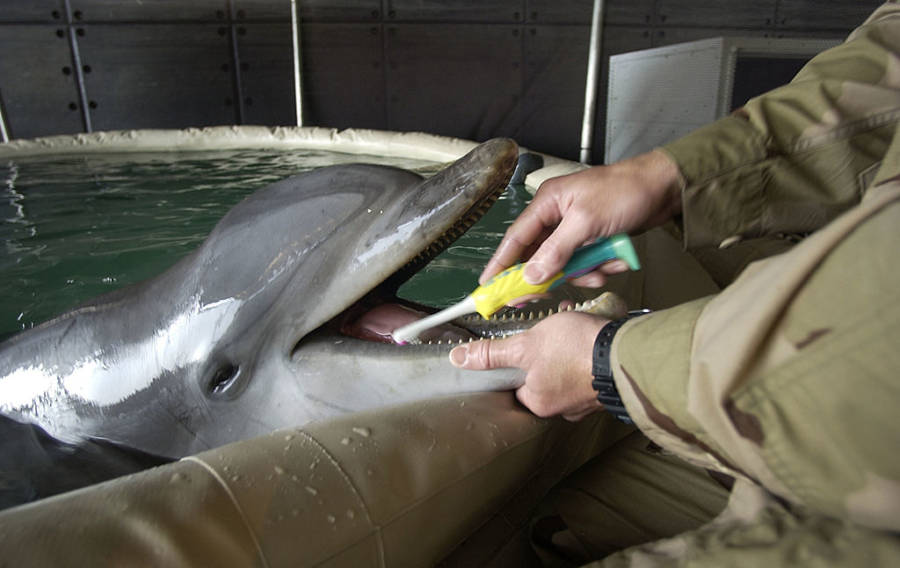 After learning about military dolphins, discover all the violent ways in which humans have used animals as weapons, learn about these weird pets, before learning how dolphins have conversations like humans do. Then, see some of the deadliest animals that most people don’t know about.