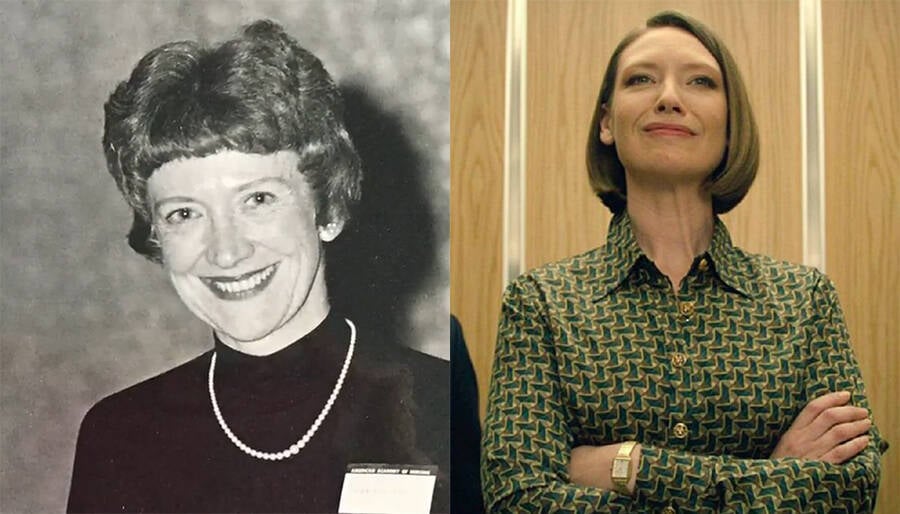 YouTube/NetflixProf. Ann Burgess (l.), who was instrumental in turning F.B.I. agent John Douglas’ interviews into a formalized system for criminal profiles, is portrayed in the series Mindhunter by Anna Torv (r.).

Mindhunter‘s F.B.I. agents Holden Ford and Bill Tench conduct dozens of interviews with some of the worst serial killers in history, but without Dr. Wendy Carr, their interviews would be of limited use.

Inspired by the work that Boston College professor Ann Burgess did with F.B.I. agents Douglas and Ressler, Carr’s experience as a researcher and psychologist takes what Holden and Ressler gather in interviews and turns it into something that can be used in the future to capture serial rapists and murderers.

As a professor of psychiatric mental health nursing at the Connell School of Nursing at Boston College, Burgess conducted foundational research in the area of rape trauma along with sociologist Lynda Lytle Holmstrom in the 1970s.

Her work came to the attention of the F.B.I. when an agent, who was tasked with developing courses on rape for other F.B.I. agents, was engaged in professional development work with the Los Angeles Police Department.

When he asked the detectives what they knew about rape, one detective who also worked as a nurse directed him to Burgess and Holstrom’s recently published work on the subject.

YouTubeAnn Burgess, who inspired the character of Wendy Carr on Mindhunter, is a professor at Boston College who conducted foundational research in rape trauma.

When approached by the F.B.I. for help in developing a more systematic approach to studying sexual crimes, Burgess agreed, helping Douglas and Ressler build the interviews they were conducting into a formal study of criminal behavior, published in 1980, as well as in a book on the subject, Sexual Homicide: Patterns and Motives, published in 1988.

Unlike Dr. Carr’s, however, Burgess never gave up her career as an academic to join the F.B.I. in Quantico, Virginia. She told the Pittsburgh Post-Gazette that she thinks the show gets the substantive facts correct.

“Season one, which I’m very familiar with, probably gets 80 percent of the cases pretty solid,” she said. “They try to stick to the information that they have.”

She acknowledges that Carr’s closeted homosexuality is creative license on the show’s part. “My son called me and said, ‘What haven’t you told me, Mother?'” she told the Gazette. “We kind of joked about it. Obviously, they’re making a wide cut for an audience.”