The paleontologist who first discovered the fossil died before he could study it. Now, one of his former students has picked up where he left off. 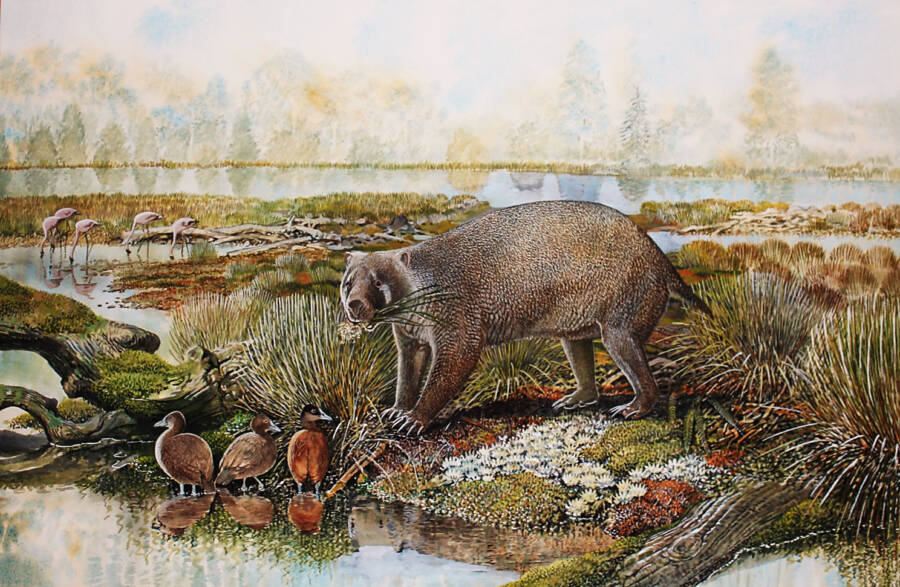 Peter SchoutenMukupirna nambensis had very soft teeth compared to modern wombats, as grasslands in Australia hadn’t developed yet — and they fed on softer plants.

About 10 years ago, paleontologist Julien Louys accidentally discovered the fossils of a giant extinct wombat cousin. Left behind in the collection drawers of New York’s American Natural History Museum, they had been collecting dust since 1973.

According to ABC Australia, they’ve now finally gotten a closer look. Published in the journal of Scientific Reports, the study identifies the fossils as a 25-million-year-old animal dubbed Mukupirna nambensis. However, when he first discovered the large unidentified fossil, Luoys was thoroughly perplexed.

“The overwhelming sense I had was confusion,” said Louys. “Because I could see it was something unique and important, but I couldn’t place it.”

Louys couldn’t place the remains as they belonged to a yet unidentified member of the Vombatiformes order, which include wombats and koalas. Not only did his research yield the discovery of an ancient animal — but it filled in a long-missing link in the Vombatiformes family. 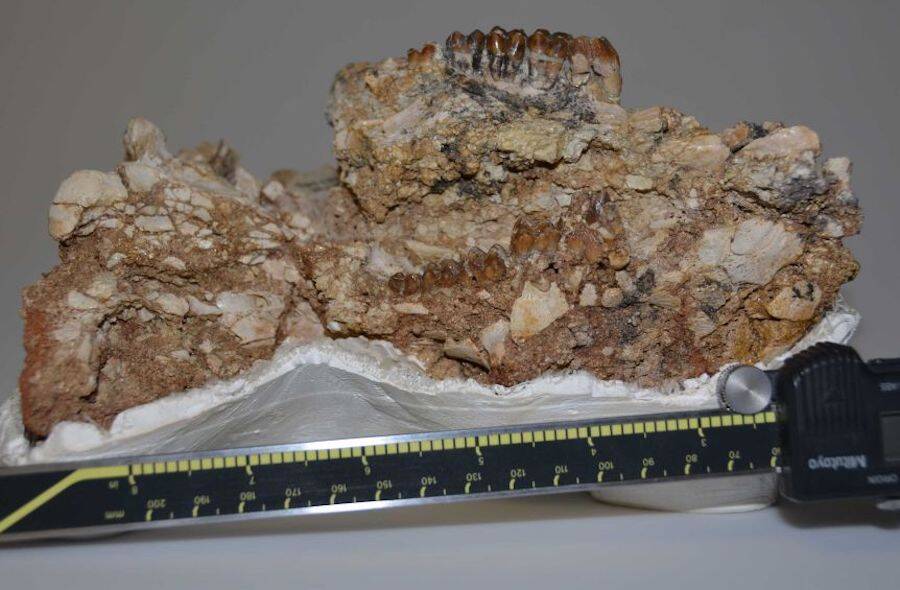 “It was the teeth that really pinpointed to me that this was a missing piece,” he said. “Sometimes it just takes a fresh pair of eyes to look through an old collection.”

Mukupirna lived in the Lake Eyre Basin of Australia 25 million years ago. Luoys and his team of international researchers believe the animal was between four to five times larger than modern-day wombats — and weighing between 315 and 377 pounds.

The species got its name from the languages of Dieri and Malyangapa peoples, with Mukupirna translating to “big bones,” but its teeth are what first attracted attention.

“The form of the teeth is unlike any that we’ve ever seen in any other group of marsupials,” said co-author Mike Archer of the University of New South Wales.

While the animal is substantially larger than its wombat cousin, the Mukupirna surprisingly had much weaker teeth. When the Mukupirna walked the earth, Australian grasslands had not yet evolved, so it subsisted on a diet of softer plants.

“The teeth have very thin enamel,” said Archer. “If it had spent one day chowing down grasses, it would have lost its teeth.” 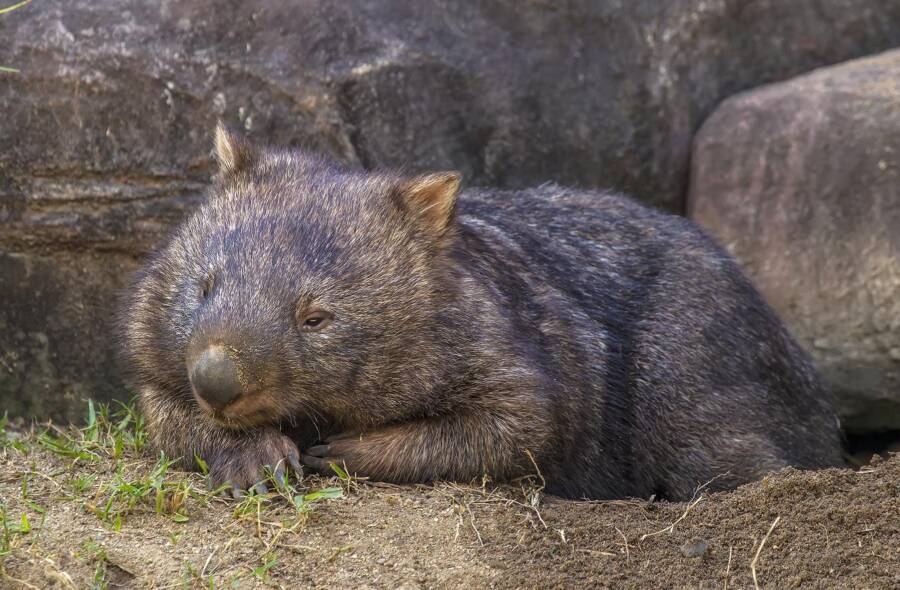 Wikimedia CommonsCompared to modern wombats such as this, the ancient species didn’t dig burrows — and instead used its powerful front legs to dig and scratch for soft plants.

According to IFL Science, it was Archer himself who helped find the fossil in 1973. The process of discovery, meanwhile, was largely rooted in luck.

“In most years the surface of this dry lake is covered by sands blown or washed in from the surrounding hills,” Archer said of the discovery site. “But because of rare environmental conditions prior to arrival that year, the fossil-rich clay deposits were fully exposed to view.”

As for the animal’s mobility and foraging technique, Mukupirna didn’t dig burrows like standard wombats do. Instead, it had two powerful front legs that allowed it to scratch and dig for soft plants, roots, and tubers — the underground part of a stem.

The Australian fossil record between 50 and 25 million years ago is quite sparse, so this find helps clarify how the various Vombatiformes families separated. Though the new species filled a gap in the family tree, it had such unique characteristics that it was put in its own sub-family, Mukuprinidae. 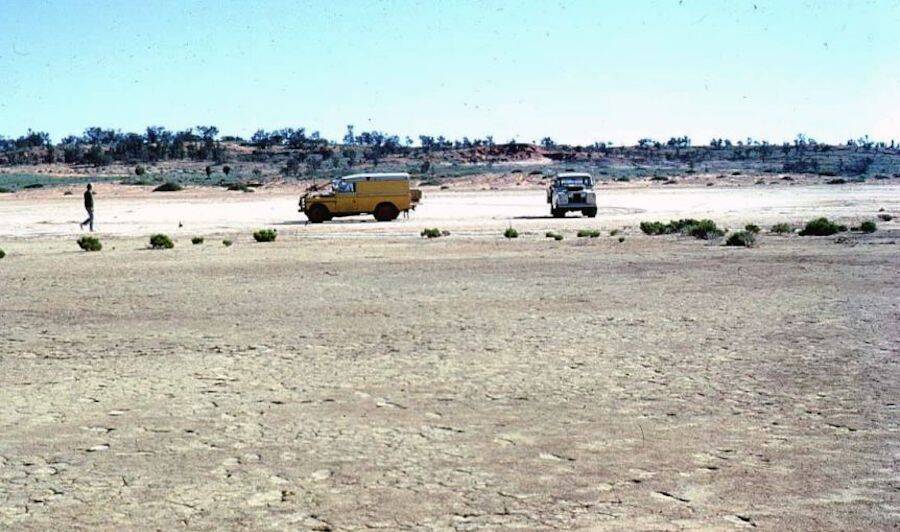 Michael ArcherMichael Archer claimed finding the fossil was pure luck, as the weather had only recently changed before his 1973 arrival at the dry Australian salt lake.

Flinders University paleontologist Gavin Prideaux said that while its been known that koalas and wombats are each other’s closest living relatives, their distinct traits suggest they’ve been evolving separately for a substantial amount of time. Mukupirna, meanwhile, are “handy” in explaining both.

“It’s the closest relative to the wombat that’s not a wombat,” he said. “And the features that it has also tie it back to other groups within the family tree for Vombatiformes.”

In the end, it’s astonishing to note that it took 50 years after Archer and his team found the Mukupirna bones — which included a partial skull and skeleton — to conduct a thorough analysis of the species.

Were it not for the fortuitous climate conditions in 1973, the find would never have occurred. Then, it took nearly half a century to analyze the discovery because Dr. Richard Tedford of the Natural History Museum, who transported the fossils back to the U.S., died before was able to.

“Richard was going to describe this thing, but he never got around to it before his passing,” said Louys of his former PhD supervisor. “When I stumbled across them I had no idea of the history of that particular specimen.”

After reading about the giant extinct wombat relative discovered in a museum drawer after 50 years, learn about 10 terrifying prehistoric animals that weren’t dinosaurs. Then, read about the ancient shark that looked like an eel and lived 360 million years ago.