"We've never had an accident like this in Brazil." 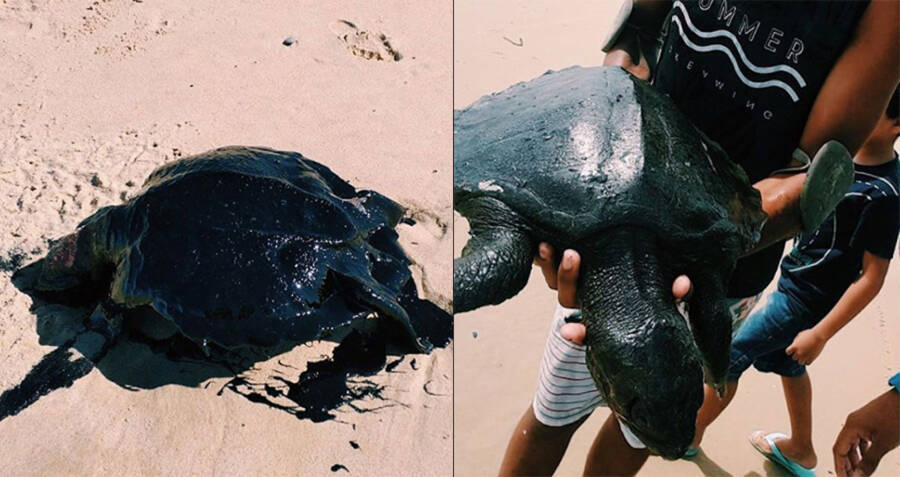 Instituto Verdeluz/InstagramA mysterious oil spill has led to the deaths of at least seven sea turtles living in Brazilian waters.

Another disastrous oil spill has contaminated the world’s waters and left wildlife suffering — and this time, nobody even knows exactly how it started.

According to the Associated Press, the Brazilian Institute of the Environment and Renewable Natural Resources (Ibama) announced Thursday that it had identified 105 crude oil spills from an undetermined source. The spills have polluted sea waters and beaches around Brazil’s northeast coast and are already taking a toll on the surrounding marine life.

Reports from environmentalists have documented sea turtles completely covered in the crude oil. At least one of the affected turtles has been taken to a rehabilitation center while seven others have already died from the oil contamination.

“We’ve never had an accident like this in Brazil…It’s the first time we’re seeing an accident with an undetermined source affecting so many states,” Ibama co-ordinator Fernanda Pirillo told the Agência Brasil news agency.

The crude oil spills have affected 46 municipalities within eight different states, including Maranhao, Piaui, Ceara, Rio Grande do Norte, and Paraiba. In the northeast region, the only state that has so far avoided contamination by the oil spills is Bahia.

The spills have also polluted several popular beach destinations, like the Jericoacoara and Praia da Pipa beaches, causing Ibama to warn tourists and fishermen to avoid these areas.

Molecular analysis of the oil from the spills performed by state oil company Petrobas determined that the oil was not produced within Brazil, but that it did come from a single source.

What that source is remains a mystery to government officials, who are working with Petrobas workers, the Brazilian Navy, and the fire department of the capital, Brasilia, to figure out where the spills are coming from.

The spills were first detected in early September, and now stretch over 932 miles along the northeast coast of Brazil.

A team of around 100 people has been dispatched to work on the clean-up operation. So far, Ibama stated that the oil spills appear to be stable, but investigators are already shifting their focus to the Amazon state of Maranhão, which is close to the borders with French Guiana, to contain the spread.

The mystery surrounding the source of the crude oil spills has alarmed environmentalists like Anna Carolina Lobo, a coordinator of the marine program of the WWF conservation organization in Brazil, who fears that Brazil’s resources alone may not be able to locate the source of the spills.

“The surveillance in our waters, no matter if this was an intentional or an unintentional spill, is too fragile for a country this big,” Lobo said. “Brazil has few boats and analysts to follow what happens in our waters.” 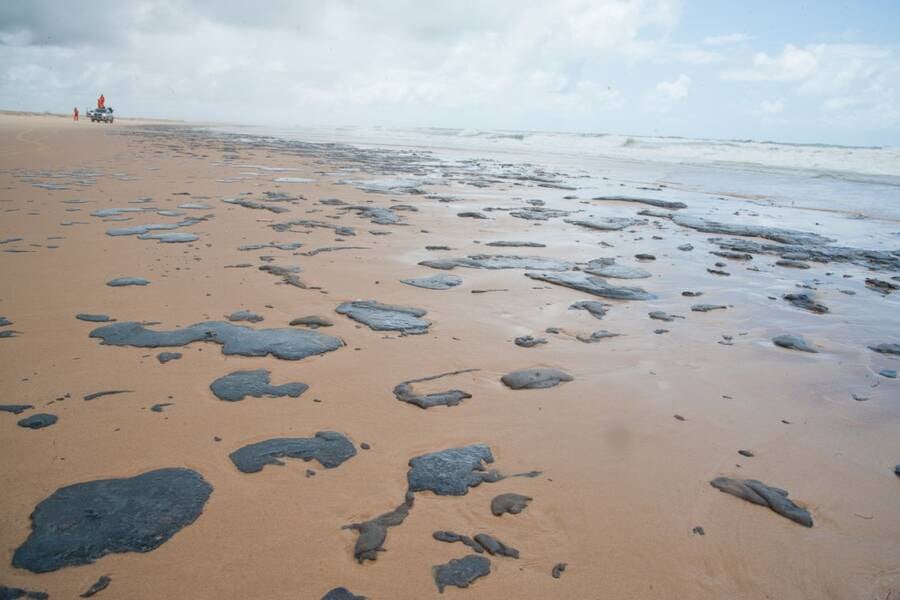 Adema/Governo de SergipeCountless puddles of crude oil contaminate a beach in the state of Sergipe.

Besides a lack of resources to manage the oil spill, funding for environmental conservation efforts have already slowed down under the current administration of President Jair Bolsonaro, who is a self-avowed anti-environmentalist and has been dubbed “Captain Chainsaw” by his opponents.

Bolsonaro’s loosening of environmental regulations has put the Amazon and its inhabitants at risk.

While no stranger to criticism from environmental advocates, the Brazilian president recently came under fire after the mass burning in the Amazon caught the world’s attention. The recent oil spills are just the latest environmental catastrophe to hit the South American country.

For now, Ibama has urged beach-goers to alert authorities to any turtles or other animals covered by oil. They also wrote that these animals should not be washed or returned to the sea prior to a proper veterinary assessment.

On a positive note, there doesn’t seem to be any contamination of the fish and crustaceans living in the affected areas so far, but it may be only a matter of time before they are contaminated as well if the source of the crude oil is not found.

Now that you’ve read up on the mysterious crude oil spill that has been polluting Brazil’s beaches, take a look at 33 horrifying photos of the damage from the Exxon Valdez oil spill that poured 11 million gallons of crude oil across the Alaskan coastline. Then, learn the devastating story of an endangered pygmy elephant that was found dead with 70 bullet holes in its body.