Fewer than 1,500 of Borneo's pygmy elephants remain in the wild. Their latest casualty was particularly brutal. 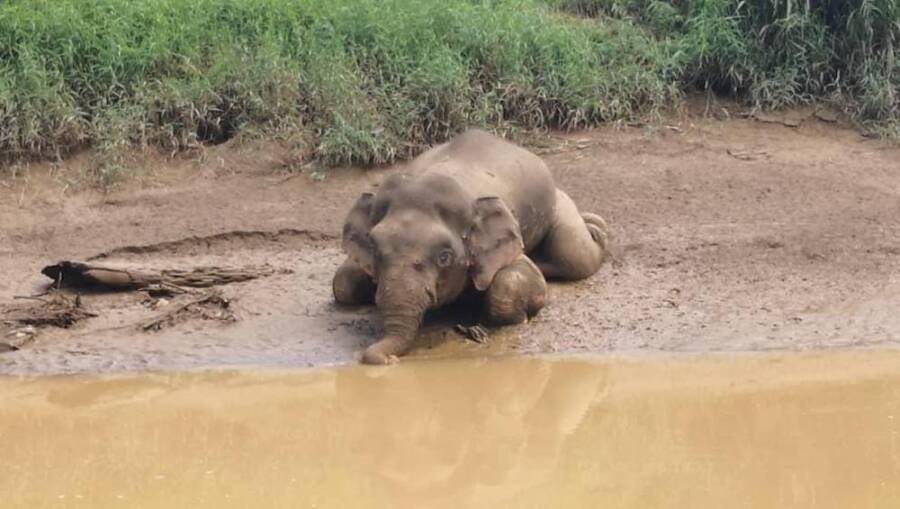 Sabah Wildlife DepartmentIt’s unclear whether the pygmy elephant died quickly or suffered through all 70 bullet wounds.

A pygmy elephant was found dead in a river on the Malaysian side of Borneo island, with 70 bullet wounds in its body and both tusks removed.

It’s a brutal blow to an endangered species already ravaged by habitat loss; fewer than 1,500 Borneo pygmy elephants remain in the wild. And now one of their own has been viciously murdered.

Preliminary postmortem analyses by Sabah Wildlife Department officials and veterinarians have concluded that the animal was shot at close range with semi-automatic rifles. Authorities, meanwhile, are searching for four to five poachers as their suspects, according to the Asian alternative outlet Coconus.

The creature was found partly underwater in Sungai Udin, and photos of its lifeless body went viral on social media. Heavy machinery was needed to move the elephant out of the river, onto dry land, and then onto a boat for thorough analysis.

Pygmy elephants have long been a protected species under the Wildlife Conservation Enactment of 1997, and so those responsible for the slaughter of this innocent animal could face up to five years in prison, and fines of up to $60,000.

The elephant’s bullet-ridden, lifeless corpse had mostly sunken in the water when locals found it.

“This is because the suspects are confirmed to have firearms and the Wildlife Department has lodged a police report,” he said.

As it stands, Wildlife officials aren’t sure whether the animal died quickly or suffered a protracted and agonizing death. While one of the 70 bullets ripped through the elephants right temple, it’s unclear whether this was one of the first or final shots.

Such an injury would’ve made the animal’s death “instantaneous,” a source said, but without a verified sequence of shots fired, the animal’s level of suffering can’t be determined. Most of the 70 bullets were found lodged in the elephant’s body. 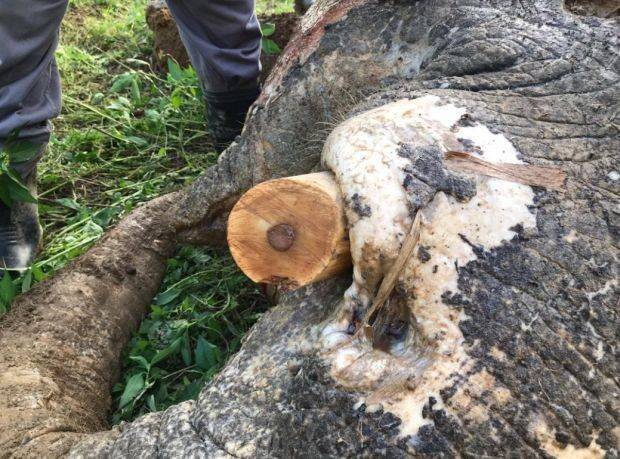 Sabah Wildlife DepartmentIvory is in high demand, and with agricultural plantations increasingly encroaching on the pygmy elephants’ habitat, these violent encounters have become fairly regular. 100 pygmy elephants have died in the last 10 years.

Meanwhile, Sabah’s Wildlife Department Director Augustine Tuuga said the death was “not common,” even though Asian elephants have long been targeted for their tusks. In this case in particular, the high price of ivory on the black market overshadowed the animal’s right to live.

Tuuga believes the poachers were local, and that this was far from a professional job. Nonetheless, solid leads have been hard to come by.

“It’s not easy to get evidence of who did all those [deliberate] acts, not easy to get the suspect, because people are not giving any information to us,” he said. “We hope to catch those who killed the elephant and hand them over to the court to face stern action.”

Elizabeth John, a spokesperson for the wildlife trade watchdog Traffic, has closely watched the last year’s string of pygmy elephant killings. There have been no arrests.

“It’s a serious situation,” she said. “Identifying and bringing those responsible for the killings to justice is key to tackling this threat. We hope investigations don’t stop at just this case, there is a high chance this is linked to others.”

Tragically, at least 100 pygmy elephants have died in the last 10 years. Many of these were purposefully killed by poison or gunfire. Suspects in this latest case remain on the loose, while the animal’s tusks are being sold off to anyone who has the money.

After learning about the endangered pygmy elephant found dead and tusk-less with 70 bullet holes in its body, watch a man looking for a dead body in croc-infested waters get dragged under by a vicious crocodile. Then, learn the sad story of Murderous Mary, a circus elephant hanged by a Tennessee town.