Ernst Kaltenbrunner: The Highest-Ranking Nazi To Face Justice At Nuremberg

Ernst Kaltenbrunner was instrumental in executing the Holocaust and so fanatical that he was even feared by other Nazis. So why haven't most people heard of him?

During the Nuremberg trials, one high-ranking Nazi official evaded public recognition. The trial’s prosecution scoured the sea of documents that bore evidence of the men’s atrocities for which they were being tried, but they couldn’t find much on commander Ernst Kaltenbrunner.

Although he was largely ignored by the public and press at the time, Kaltenbrunner was, in fact, the highest-ranking SS commander in that courtroom, not to mention the most fearsome with a battle-scarred face.

So why was he the subject of such obscurity?

How Ernst Kaltenbrunner Became A Nazi 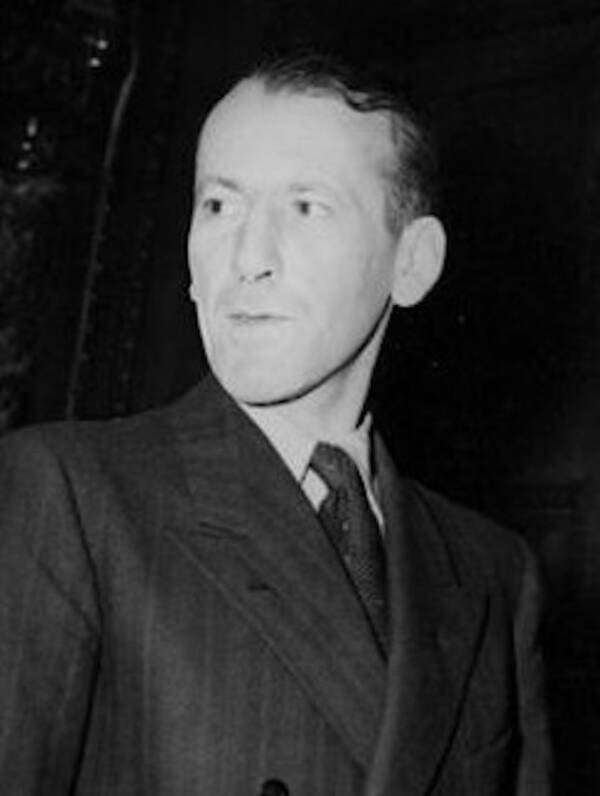 Before he became the feared Nazi commander, Ernst Kaltenbrunner was just an Austrian boy born in Ried im Innkreis, a district in the Upper region of the country, on Oct. 4, 1903. His parents were staunch Nationalists and he befriended future Nazi and so-called “Czar of the Jews,” Adolf Eichmann.

When his family moved to Linz, Kaltenbrunner attended the prestigious State Realgymnasium, the most advanced education in the German secondary school system at the time.

He later graduated with a law degree from college and, at 23 years old, earned his chops working as an apprentice lawyer. As a lawyer-candidate, he moved from one place to another working at different firms until 1928, when he finally settled in Linz and opened his own practice.

Standing at six feet and four inches, Ernst Kaltenbrunner was an imposing figure. His face was scarred from ear to chin. The scar was allegedly sustained from a fencing duel among other students who belonged to fraternities known as “Mensur.” Scars like this were considered a rite of passage.

It was in Linz that Kaltenbrunner joined the Nazi Party and four years later, the Schutzstaffel (SS) which was the party’s major paramilitary organization under Adolf Hitler. Armed with a cool demeanor, a hulking presence, and a law degree, Kaltenbrunner easily moved up the party’s political ranks.

By 1933, he was the District speaker or Gauredner and legal counselor Rechtsberater of the SS division VIII. 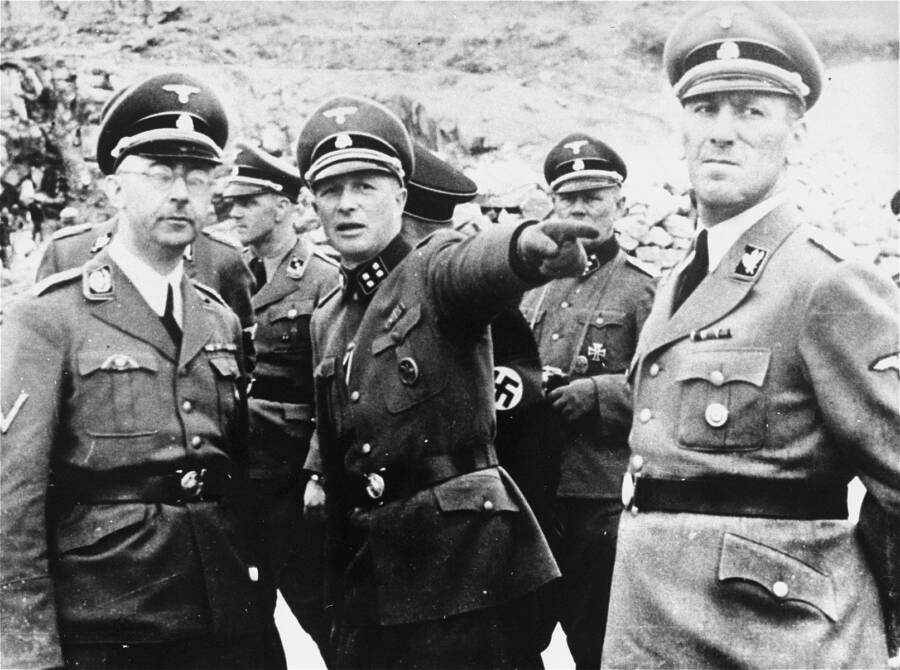 U.S. Holocaust Memorial MuseumKaltenbrunner (far right) and other Nazi leaders during a visit to the Mauthausen concentration camp.

Kaltenbrunner continued up the ranks and became the führer of regiment 37 and later of the SS division VIII. During Austria’s Engelbert Dollfuss administration, Kaltenbrunner was jailed in January 1934 on account of his involvement with the Nazi party.

He was sent to the concentration camp Kaisersteinbruch along with other National Socialists who threatened Austria’s conservative government.

But imprisonment could not stop Ernst Kaltenbrunner’s powerful influence. His natural leadership attracted a following in the camp and he staged a hunger strike. The resistance Kaltenbrunner led forced the Austrian government to release him and 490 other National Socialist prisoners.

Kaltenbrunner didn’t enjoy freedom for long, however. He landed in jail again the following year for high treason and he was committed to the court-martial of Wels in Upper Austria. The accusations were eventually dropped but he still received a sentence of six months imprisonment for “subversive activities.”

Once he reached Obergruppenführer (general) status in the Austrian SS, the federal government stripped him of his right to practice law. But that didn’t stop Kaltenbrunner from his true work: spreading the influence of the Nazi party and SS.

Feared By Other Nazis 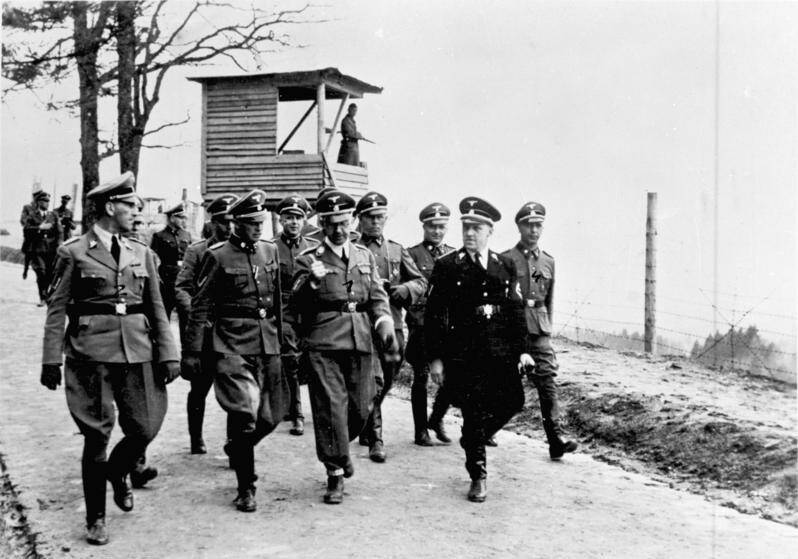 Getty ImagesLittle photographic evidence exists of Kaltenbrunner which made him an elusive figure during the Nuremburg trials despite his influence within the party.

On Jan. 30, 1943, a decade after he joined the Nazi party, Ernst Kaltenbrunner was appointed Chief of the Reich Security Main Office (RSHA) after his predecessor, Reinhard Heydrich, was assassinated in Prague.

As chief of the RSHA, Kaltenbrunner was thereby responsible for the activities of the German security and police force. He was present at a meeting between top Nazi officials Heydrich, Himmler, Goebbels, and even the Führer himself, during which it was decided that the Jews should be systematically exterminated.

Under Kaltenbrunner’s charge, the genocide of the Jews increased. Further, Kaltenbrunner had a personal vendetta against homosexuals. He tried to convince the Ministry of Justice in July 1943 to mandate the forced castration of proven homosexuals. This effort failed, but Kaltenbrunner did succeed in convincing the army to ensure the prosecution of thousands of homosexuals.

Kaltenbrunner’s statement during the Nuremberg trials.

Even Nazi Foreign Intelligence Head Walter Schellenberg, who was Kaltenbrunner’s direct subordinate, considered the Nazi commander as one of his own “most active and dangerous enemies.”

“[Ernst Kaltenbrunner] made it very clear in his official relations with all of us who were his Amt Chiefs that he was the head of the [RSHA] office exercising full executive powers and deciding all matters of policy,” Schellenberg would later tell investigators in the Nuremberg trials. 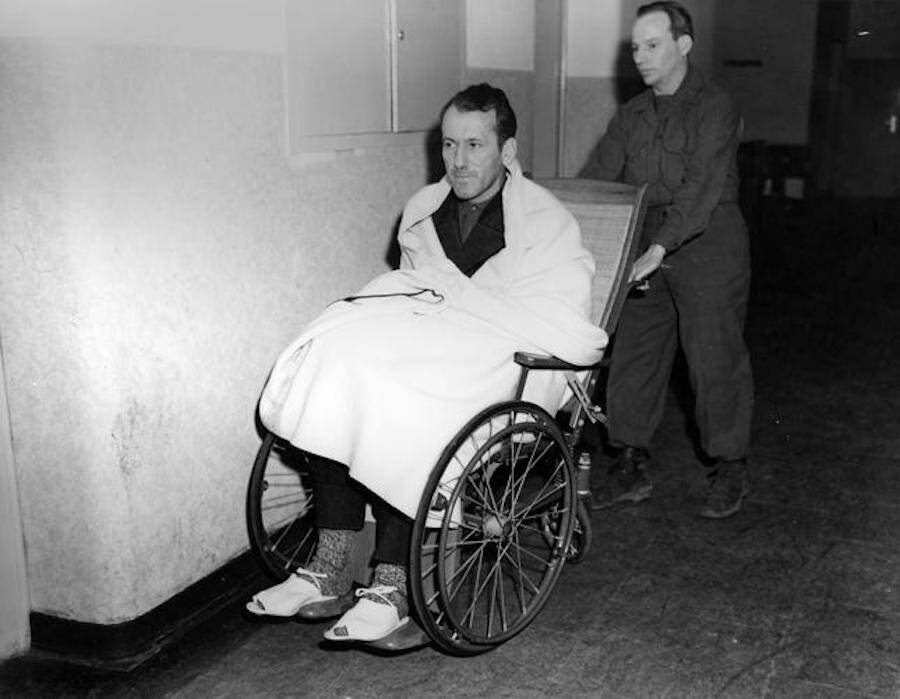 Wikimedia CommonsErnst Kaltenbrunner was late to join the other 23 Nazi defendants in court after he suffered a brain hemorrhage during interrogations.

If he wasn’t despised, he was feared. Even Reichsfuehrer Heinrich Himmler, whom Kaltenbrunner mocked for having “slave-like obedience” towards Hitler, was careful around Kaltenbrunner even though he was his subordinate.

According to intelligence accounts, when Himmler was supposed to receive Swedish delegates from the Jewish World Congress, Himmler reportedly said, “How am I going to do that with Kaltenbrunner around? I should then be completely at his mercy.”

Indeed, Kaltenbrunner had many foes inside the organization. By his own accounts, he did not get along with his fellow Nazis.

Ernst Kaltenbrunner pled ‘not guilty’ during the Nuremberg trials.

The SS was rife with internal politics and conflicts, partly sparked by competition among its members to gain Hitler’s favor. Ernst Kaltenbrunner had personal ties with the Nazi Führer since childhood which emboldened him to bypass Himmler, who was supposed to be Kaltenbrunner’s direct superior and report directly to Hitler.

Hitler also entrusted Kaltenbrunner with sensitive duties, like investigating the attempted assassination of Hitler in July 1944, and the two spent hours strategizing together towards the end of the war.

After the Nazis lost the war, 24 of the most important political and military leaders of the Third Reich were tried before a series of military tribunals held by the Allied forces. Ernst Kaltenbrunner was among them.

Kaltenbrunner held as much power in the party as Heinrich Himmler or Reinhard Heydrich, but he was not as recognizable. 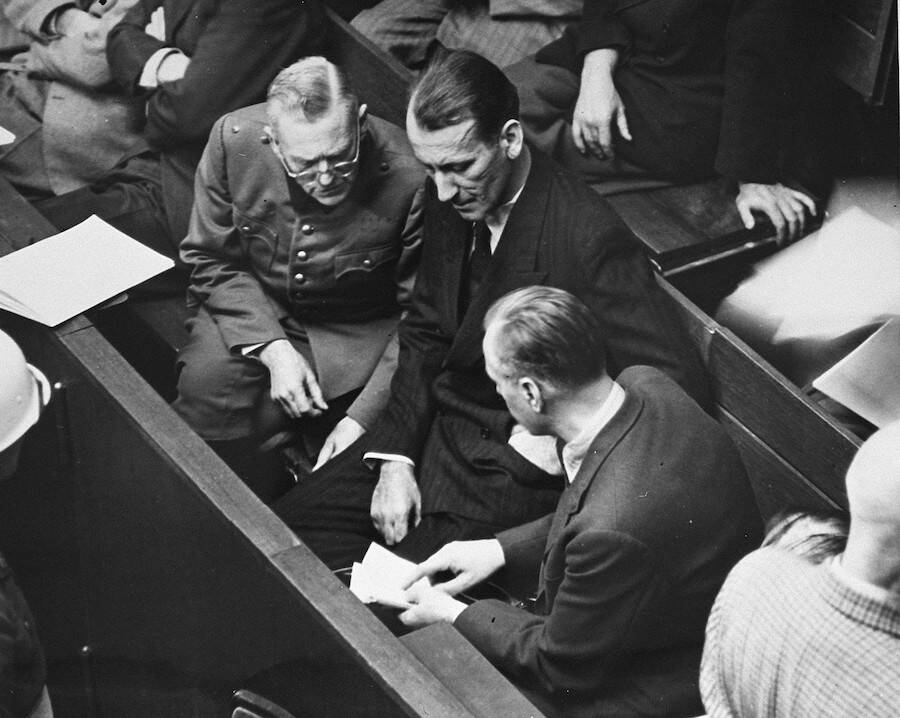 Kaltenbrunner had missed the opening day of the trial due to a brain hemorrhage that he suffered during interrogations. He was wheeled into court after several weeks of recovery and, according to Jewish American psychiatrist Leon N. Goldensohn, was received coolly by his war-time colleagues.

Goldensohn was tasked with monitoring the mental health of the Nazi defendants during the trials and did so through candid interviews with the war criminals.

“I am thought of as another Himmler. (smiles) I’m not. The papers make me out as a criminal. I never killed anyone.”

When Ernst Kaltenbrunner spoke, Goldensohn noted that his “calmness and well-mannered attitudes” were of face-value only and actually “indicative of a capacity for harsh, ruthless action, if such would have been the possibility.”

His measured tone broke once when he spoke against Soviet Russia’s supposed plot to take over Europe — the reason, Kaltenbrunner claimed, behind the Nazi’s brutal European occupations.

Kaltenbrunner suffered another brain hemorrhage during the trials which took him out of court until January 1946, when he was well enough to state his plea.

Kaltenbrunner preached about Germany’s right to self-defense against the looming Soviet invasion and he denied any involvement in the Holocaust. He pled “not guilty.” 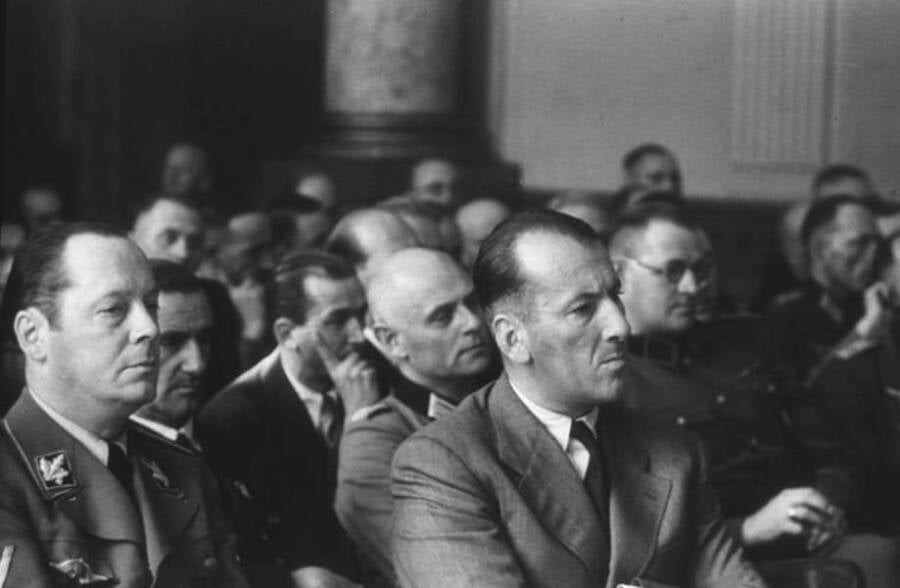 Wikimedia CommonsNazi SS Leader Ernst Kaltenbrunner and others at the Nuremburg trials where 24 Nazi commanding officers were tried for atrocities against Jewish people during the war.

Kaltenbrunner called the prosector’s claims to his “destruction of Jewish life” as not “in accord with the evidence nor with the truth.” He argued that any orders regarding the concentration camps came from the RSHA before he was even appointed to that office. He added that he was only guilty of supporting the Reich’s defense against the Soviet Union.

But prosecutors found clear evidence of frequent conferences between Kaltenbrunner’s office, the RSHA, and executives of the SS Wirtshaft and Verwaltungshauptamt which controlled the internal administration of the concentration camps. This made it unlikely that Kaltenbrunner was unaware of or uninvolved in the holocaust.

Not to mention there were photos of Kaltenbrunner in his Nazi uniform visiting the deadly Mauthausen concentration camp in Austria with a group of SS leaders. 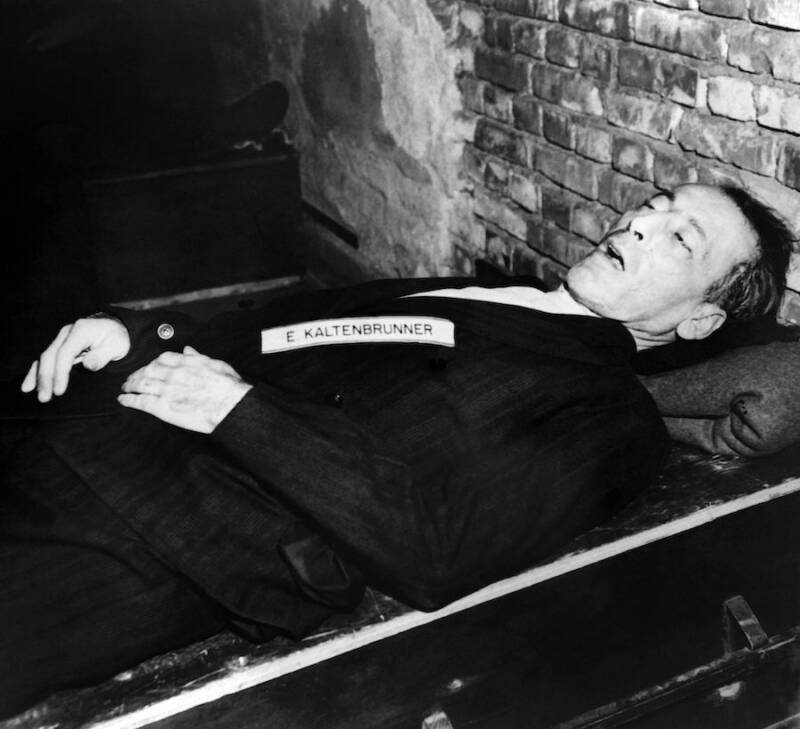 On Sept. 30, 1946, the International Military Tribunal convicted Kaltenbrunner of two out of the three charges that had been thrown against him — he was ruled guilty of war crimes and crimes against humanity. For this, the tribunal sentenced him to death by hanging.

He was swiftly executed the next month along with eleven other Nazi co-defendants, making him the highest-ranking SS commander to have ever received justice for his heinous crimes.

After reading about Ernst Kaltenbrunner, discover more prominent Nazi figures like Ernst Röhm, the early Nazi leader who rivaled Hitler — and was executed for it. Then, check out Irma Grese, one of the Nazis’ most feared guards known as the “beautiful beast.”