11 Of The Most Frightening Mythical Creatures From Across The World

From the cannibalistic Wendigo to the dragonlike Hydra, these mythical animals and creatures have terrified people across the world for centuries.

Every culture has its own monster and each one tells its own story about what haunts or scares us. Mythological creatures are in essence the manifestations of our biggest fears.

The stories our ancestors left behind about the heroes who conquered mythological creatures weren’t just stories, they were insights into how we wished to take some control over an ancient world that was often overwhelming or overpowering. 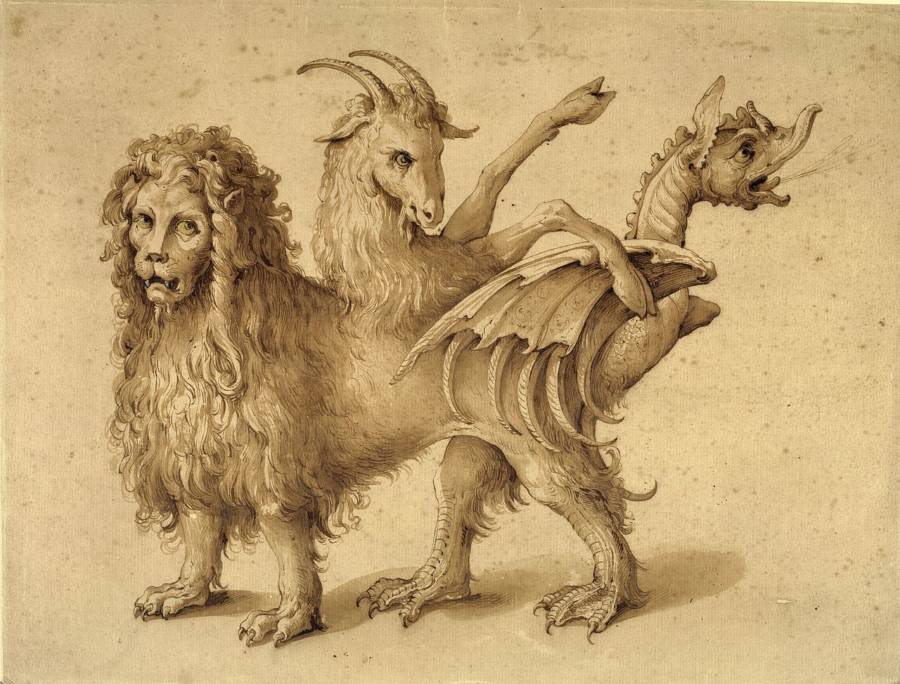 Jacopo LigozziA chimera, a mythical creature as described in Homer’s Iliad. Circa 1590-1610.

We have not changed much since the superstitions of our ancestors.

We’re still thrilled at the idea of these ancient monsters and at the heroes who defeated them. Some of the mythical creatures on this list and their horrifying legends are ones you’ll know well; others may be new horrors you’ve never imagined.

The Jesuits coming to replace and support their sickened brethren had heard that things had gone wrong at the mission – but what they found when they got there was worse than they could have ever imagined. As they wrote:

“Those poor men… were seized with an ailment [that] makes them so ravenous for human flesh that they pounce upon women, children, and even upon men, like veritable werewolves, and devour them voraciously, without being able to appease or glut their appetite — ever seeking fresh prey, and the more greedily the more they eat.” 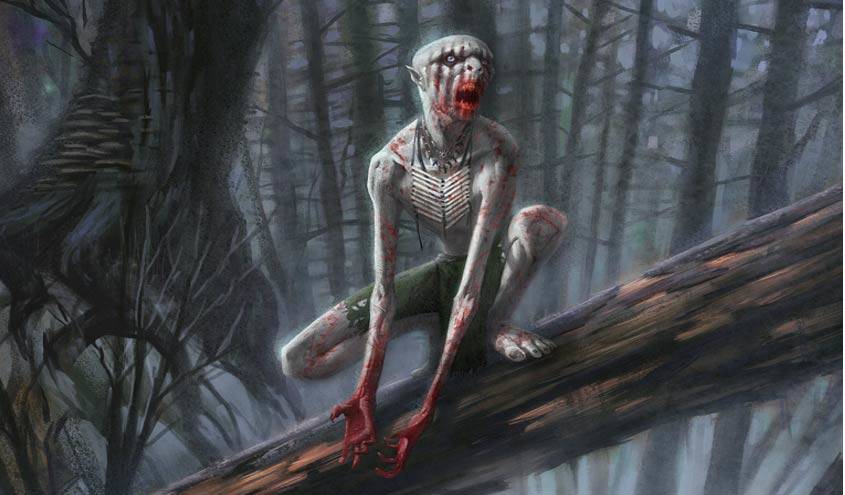 Surnaturel TJ Chaîne de Paranormal/YouTubeOne of the mythological creatures known as the Wendigo.

The missionaries they’d come to replace had turned into cannibals. It was unimaginable to the brothers in Christ but the Algonquin tribe knew this horror all too well.

These men had been possessed by one of the mythological creatures known as the Wendigo.

Wendigos were said to be man-eating monsters that roamed the land near the Great Lakes. Their bodies were emaciated, their ribs stuck out through their thin, pale skin, and their eyes were sunk deep down into their sockets. They looked like men who had died of starvation, walking through the world after a week of decomposing in the grave.

A Wendigo’s appetite could never be filled. It would attack other men and eat their flesh, but every bite would just make them larger and hungrier, until they were massive, flesh-starved giants towering over the trees. 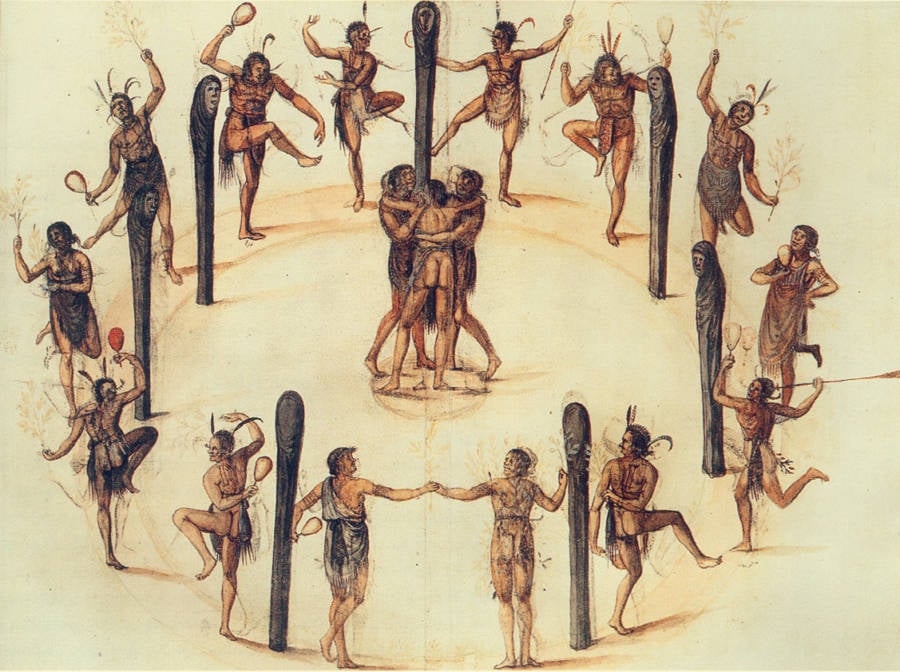 Wikimedia CommonsMembers of an Algonquin tribe perform a ritual dance. 1585.

These missionaries, the Algonquin tribe insisted, had turned into Wendigos and started killing their fellow men. It was something that had happened before, usually during famines in a cold winter. And it was something the tribe had learned to prepare for. They would hold great festivals where they would dance and chant, trying to keep this mythological creature away.

Most likely, the men had just gone mad with hunger and turned to cannibalism. But the idea of these mythological creatures must have almost been a comfort to the Algonquins. It was a way to make sense of moments when hunger would drive good and decent men into doing the unthinkable. 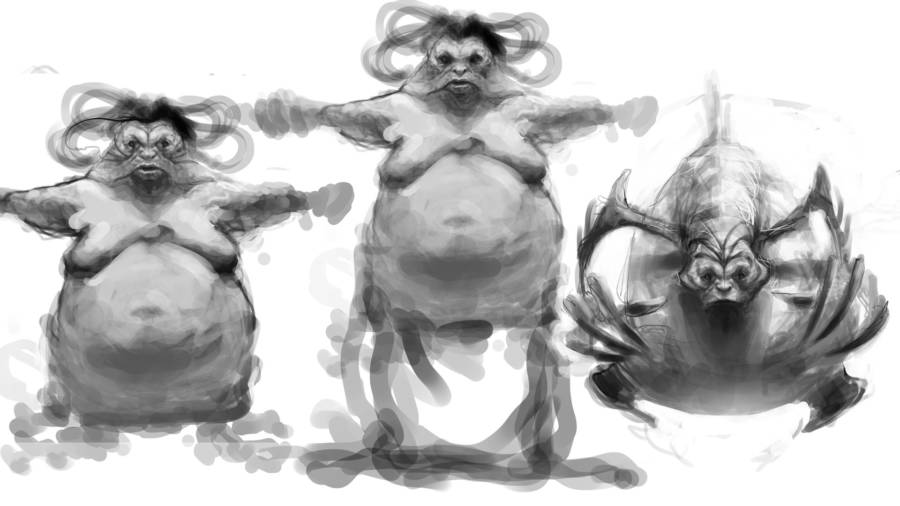 Jonathan Wright/PinnguaqAn artist’s rendition of Qalupalik, a mythical creature of the Inuit.

The Inuit children of the arctic knew never to get too close to the water’s edge because there, underneath the ice, Qalupalik lay waiting for them.

The first thing the Inuit children were told they would hear when Qalupalik was near would be the eerie, distant hum of its song under the sea. But if the Qalupalik was too eager to contain itself, then it would gently tap its fingers on the ice under their feet.

Qalupalik could be seen only for the flash of an instant before it was gone. It would leap out from under the water, its long, sharp fingernails would allegedly sink into its victim’s flesh and drag them forward. Its victim would get one, quick, brief glimpse of its face which was somewhat like a woman’s which had turned green and bloated from decomposing under the sea. 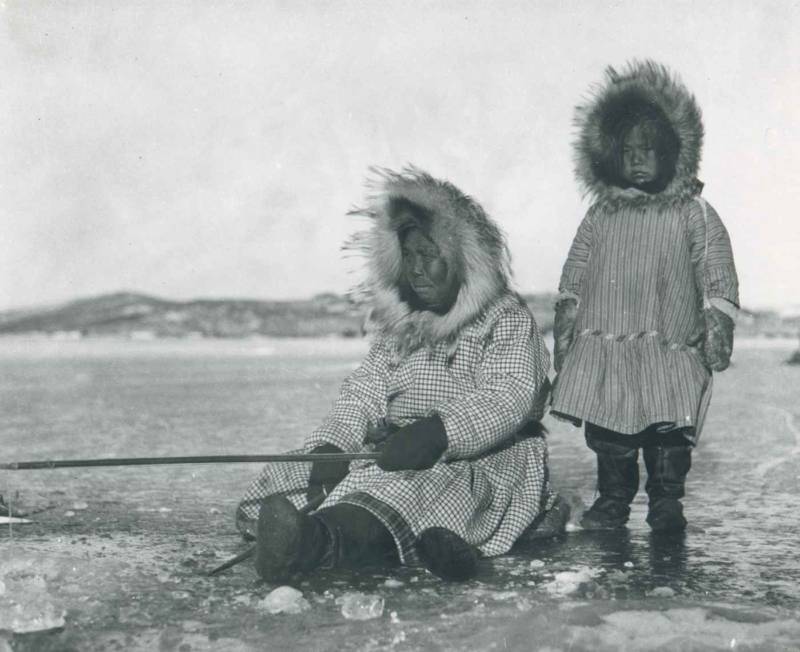 Wikimedia CommonsAn Inuit girl and her mother stand on the ice.

The Qalupalik would jam its victim into the great pouch it wore on its back and dive back down into the sea.

The Inuit child or victim might experience a few final moments of pain in the frozen depths of the Arctic waters, as the ice-cold water rushed into their open, screaming throat. They would feel the very blood in their veins freeze and through the haze of the water, hear their family’s distant, muffled voices, crying out their name.

The Qalupalik, likely, was told to Inuit children as a means of keeping them out of harm’s way, like wandering too close to treacherous, frozen Arctic waters.