Almost 40 years before the Holocaust, the concentration camp imprisonment and mass murder of the Herero and Nama people marked the first genocide of the 20th century. 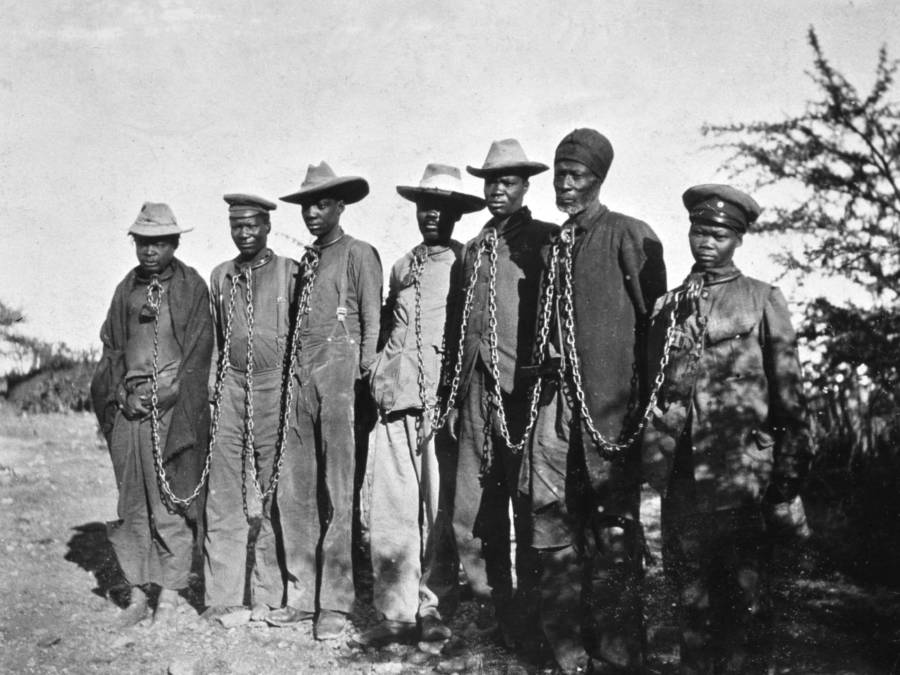 Wikimedia CommonsHerero prisoners stand in chains during the genocide. 1904.

After more than a century, Germany has now returned the remains belonging to victims of a colonial genocide in present-day Namibia that left tens of thousands dead.

On Aug. 29, representatives of the Namibian government accepted 19 skulls, five full skeletons, as well as some bone and skin fragments at a church service in Berlin, wrote Fox News. German universities and hospitals had held onto the remains for decades after using them in a series of early-20th-century pseudoscientific experiments meant to prove the supposed racial superiority of white people. 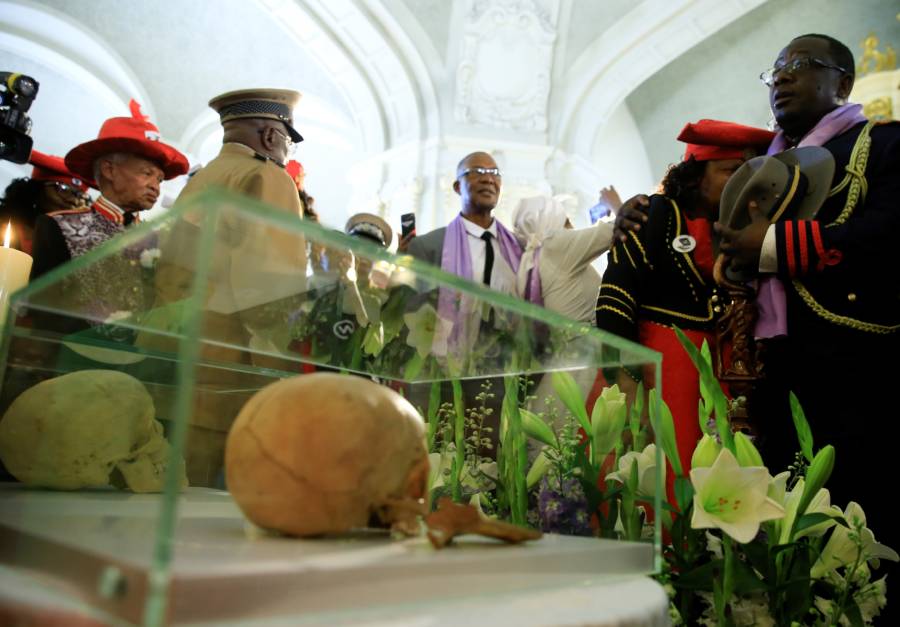 Abdulhamid Hosbas/Anadolu Agency/Getty ImagesNamibian tribal chiefs and guests attend the ceremony during which the remains of the genocide victims were returned on Aug. 29 in Berlin.

“We intend to do something today we should have done many years ago, namely to give back mortal human remains of people who became the first victims of the first genocide of the 20th century,” German Lutheran Bishop Petra Bosse-Huber said during the ceremony.

“These skulls tell the story of brutal, godless colonial past and its consecutive suppression of the Namibian people. They say, ‘Never again!'” said Lutheran Bishop Ernst Gamxamub from Namibia.

The story of the Herero and Nama genocide is indeed a brutal one — and one that very often goes overlooked. 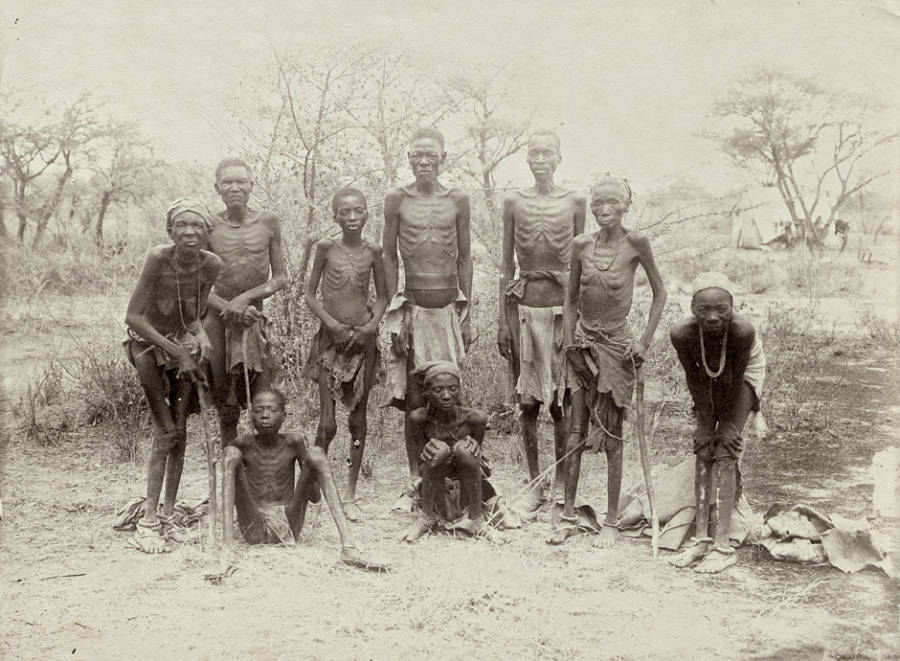 Wikimedia CommonsHerero survivors of the genocide as seen after making their escape through the Omaheke desert. 1907.

The trouble began in 1904, when the indigenous Herero and Nama people of present-day Namibia rebelled against their colonial German overlords following some two decades of exploitation and abuse as well as a number of skirmishes between the two sides. But after the 1904 uprising, skirmishes turned into all-out war.

The German government quickly dispatched military commander Lothar von Trotha to the area along with 14,000 troops, who were soon able to subdue the Herero and Nama. But military victory wasn’t enough for Trotha and the Germans, who then undertook a campaign of annihilation meant to all but eliminate the Herero and Nama entirely.

“I believe that the nation as such should be annihilated, or, if this was not possible by tactical measures, have to be expelled from the country,” Trotha said in 1904. And he kept his word.

Over the next three-plus years, the German forces systematically poisoned wells, murdered civilians, took men prisoner, pushed women and children into the desert where they would starve, and built concentration camps where those able to survive the other atrocities would surely die of disease and malnutrition.

The resulting death toll will likely never be known for sure, with current estimates ranging from 25,000 to 100,000 (or perhaps 75 percent of the Herero population and half of the Nama). Afterward, several hundreds of these victims had their remains sent to Germany, where they were used in experiments designed to show that Europeans were racially superior to Africans. 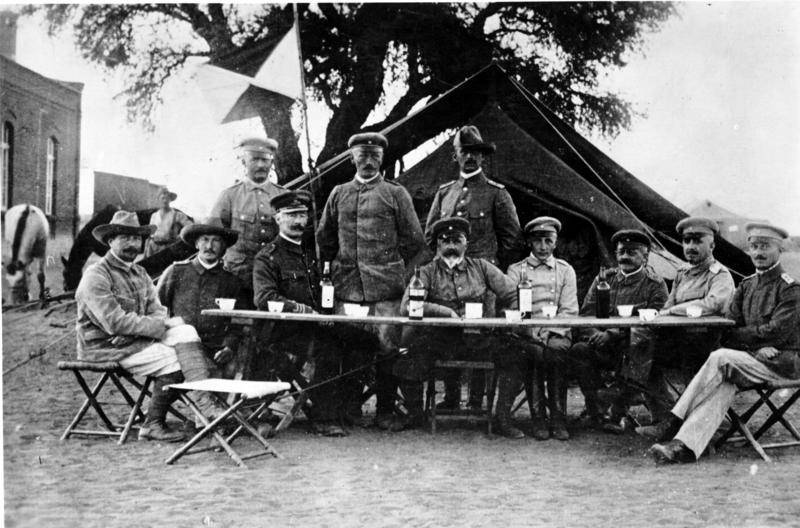 Wikimedia CommonsGerman military commander Lothar von Trotha (standing, left) poses with his staff in the city of Keetmanshoop during the genocide. 1904.

Some of these remains are precisely what the German government has now returned to the country of Namibia. This marks one of three such repatriations that Germany has made to Namibia since 2011.

However, the German government has repeatedly refused to pay reparations, instead citing the hundreds of millions of euros they’ve sent in aid to Namibia since its independence from South Africa in 1990.

“The German government considers that the use of the term ‘genocide’ does not entail any legal obligation to reparations, but rather political and moral obligations to heal the wounds. We’re sticking to that position,” Ruprecht Polenz, the German negotiator in the Namibia talks, told DW in 2016.

Furthermore, Germany has declined to make an official apology. German representatives have expressed remorse and recognized the events as a genocide, but the government has said that it is still in talks with Namibia’s government about what shape exactly that apology should take.

Meanwhile, representatives of the Herero and Nama people argue that they have not been included in these discussions at all and even filed suit against Germany in 2017 in hopes of gaining both reparations and a place in the apology talks. It remains undecided as to whether or not that suit will go to court.

But advocates for the Herero and Nama have argued that the Aug. 29 repatriation ceremony would have been a perfect opportunity for Germany to apologize.

“Is that asking too much?,” said Esther Utjiua Muinjangue, chairwoman of the Ovaherero Genocide Foundation, “I don’t think so.”

Next, read about the horrors of the genocide perpetrated by the British in Kenya. Then, see inside modern history’s first true concentration camps in this look at the Boer War.