From hot-air balloons on Jupiter to nightlife on a planet with no star, these images are truly out of this world. 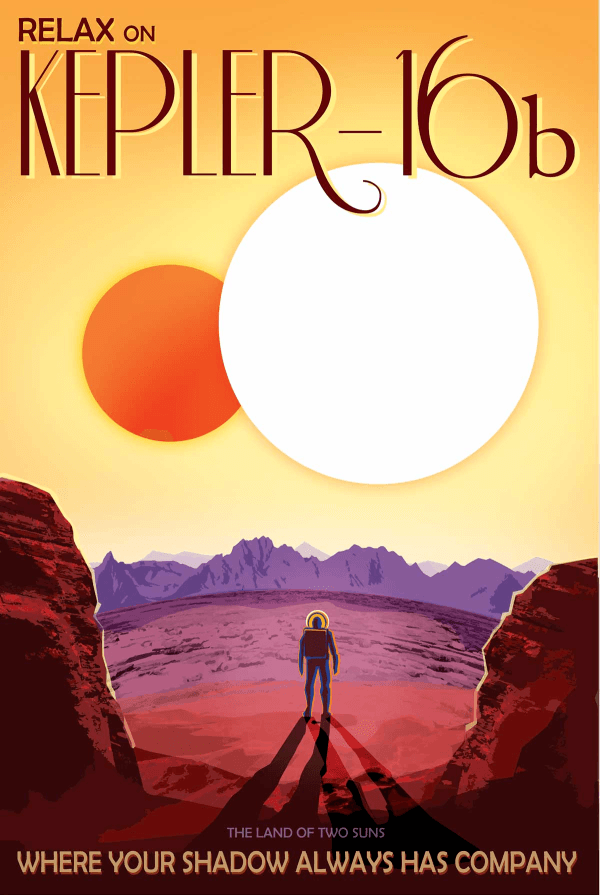 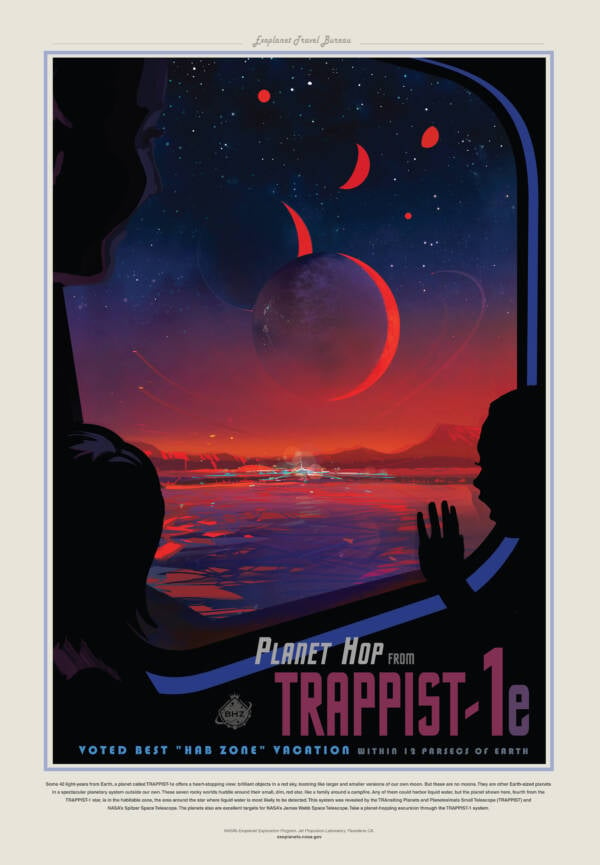 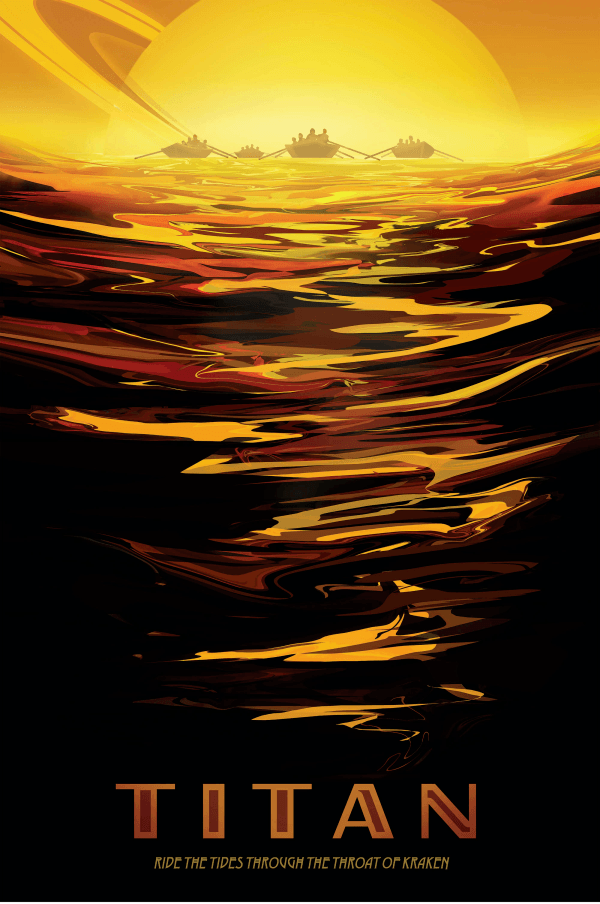 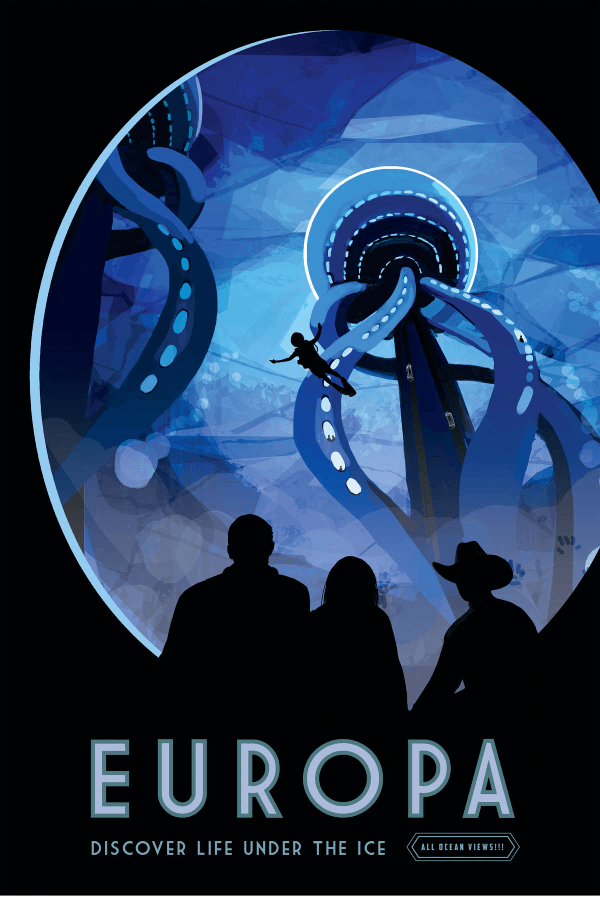 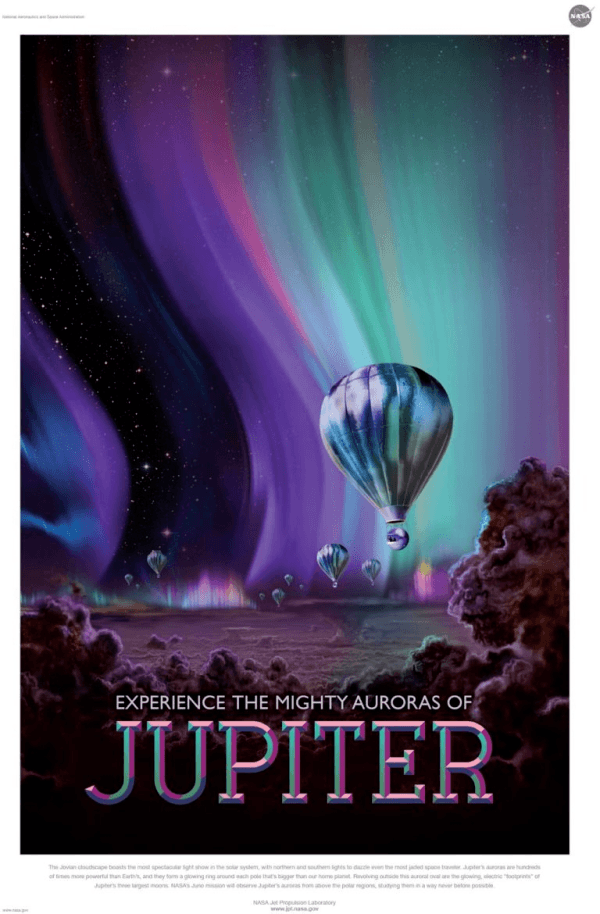 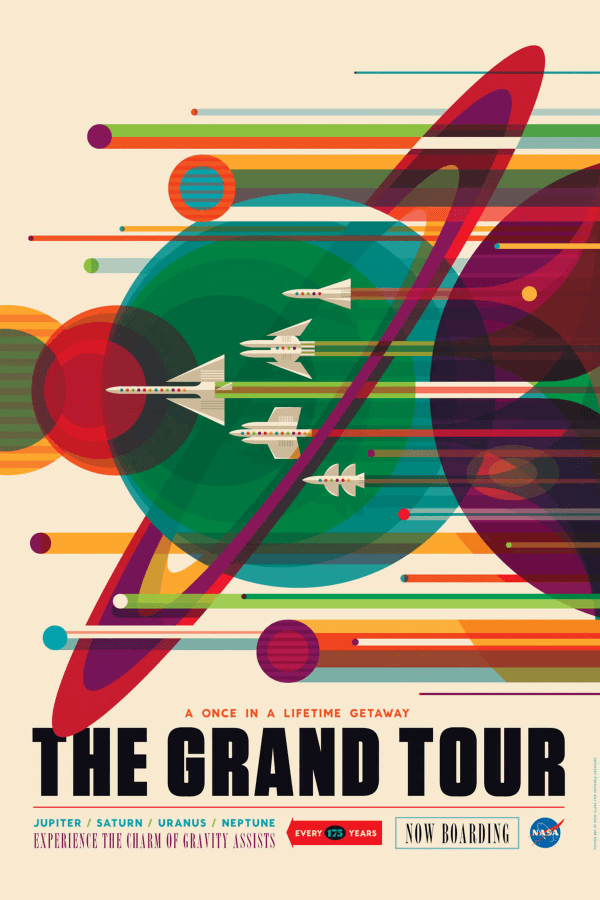 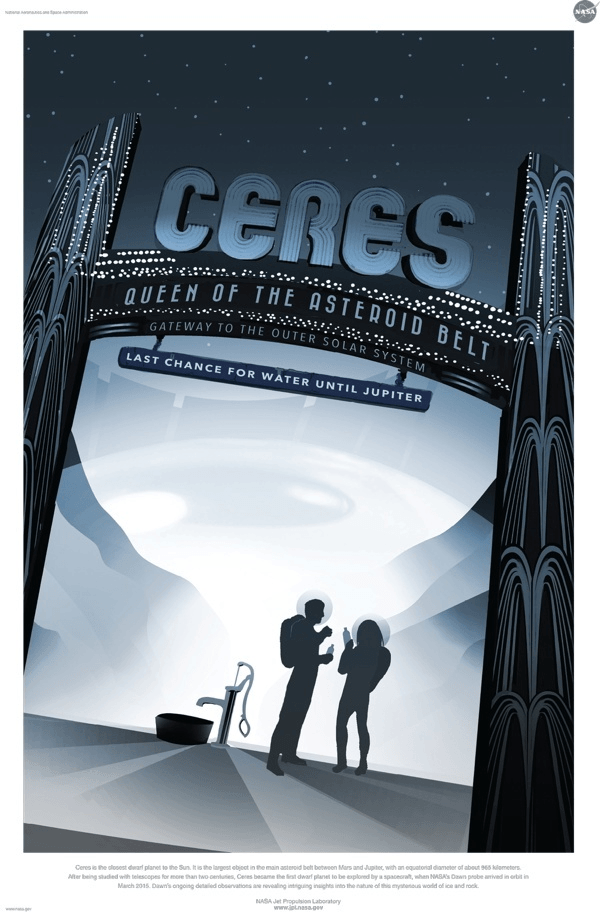 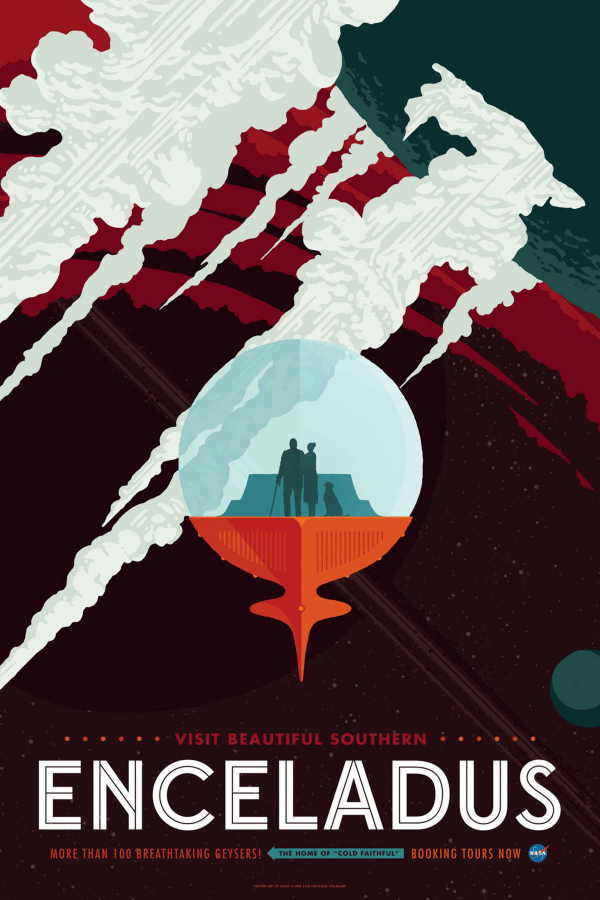 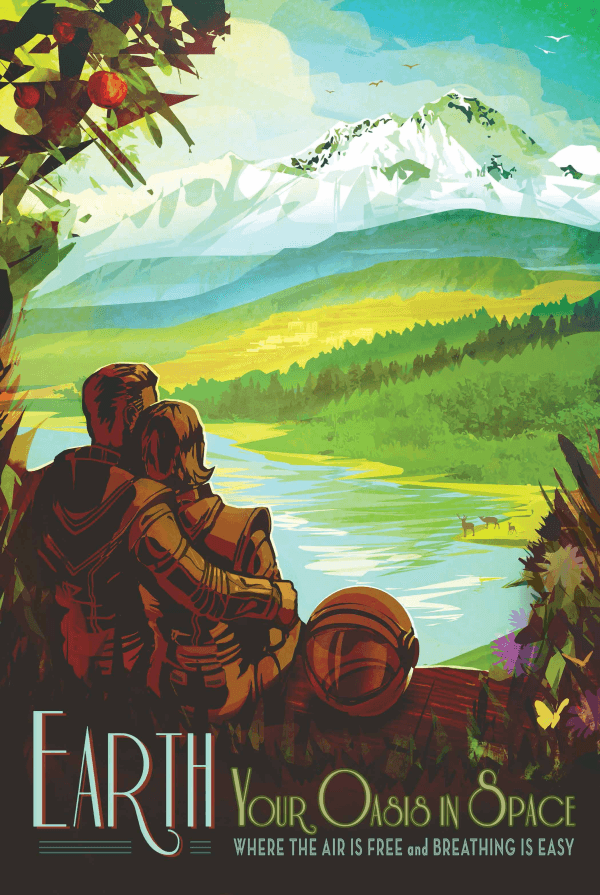 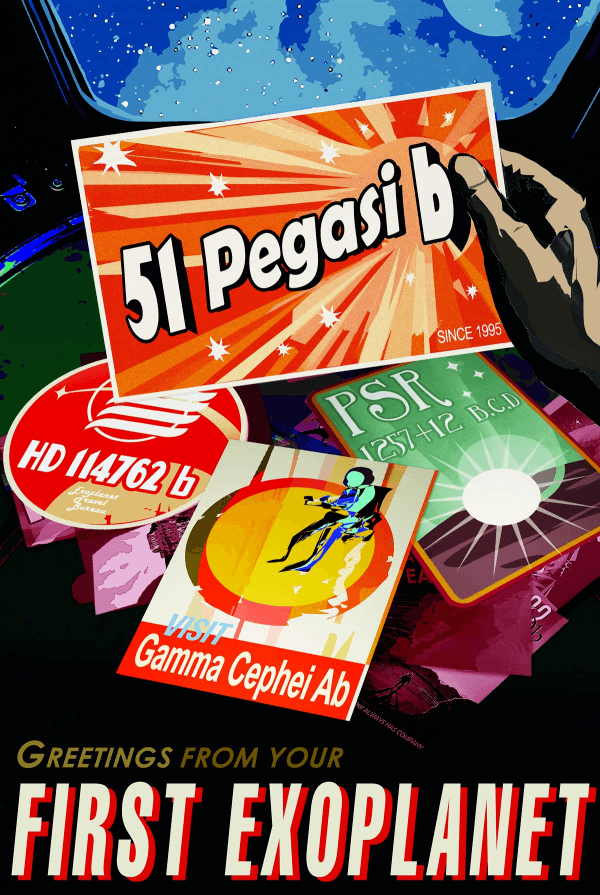 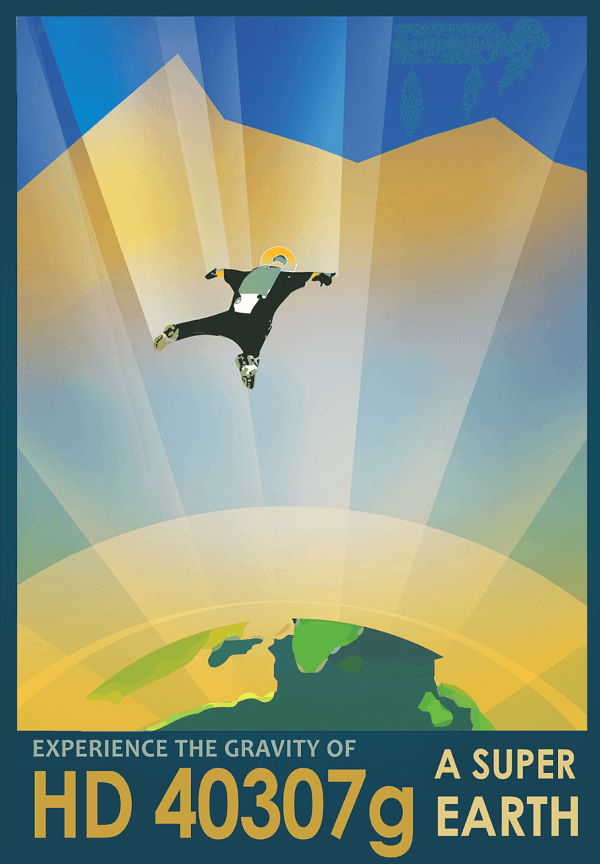 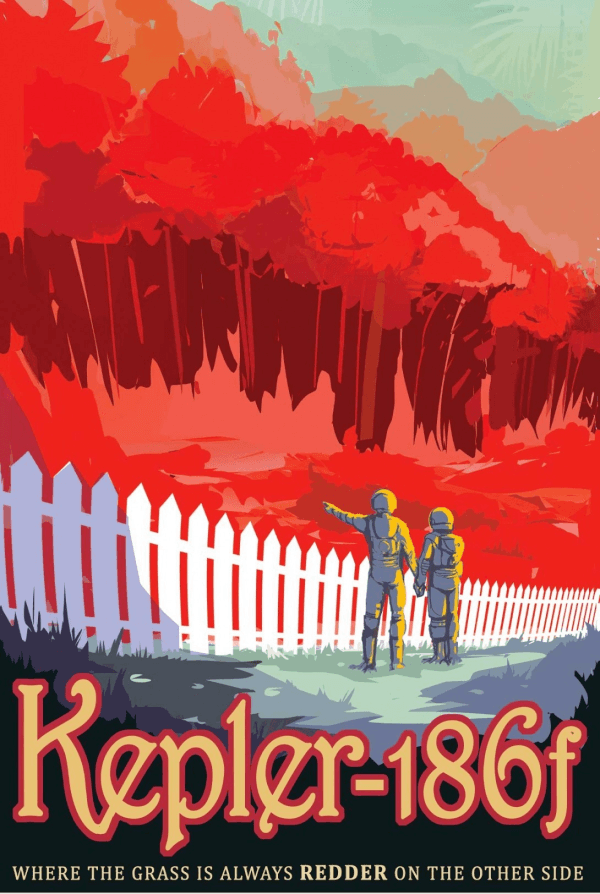 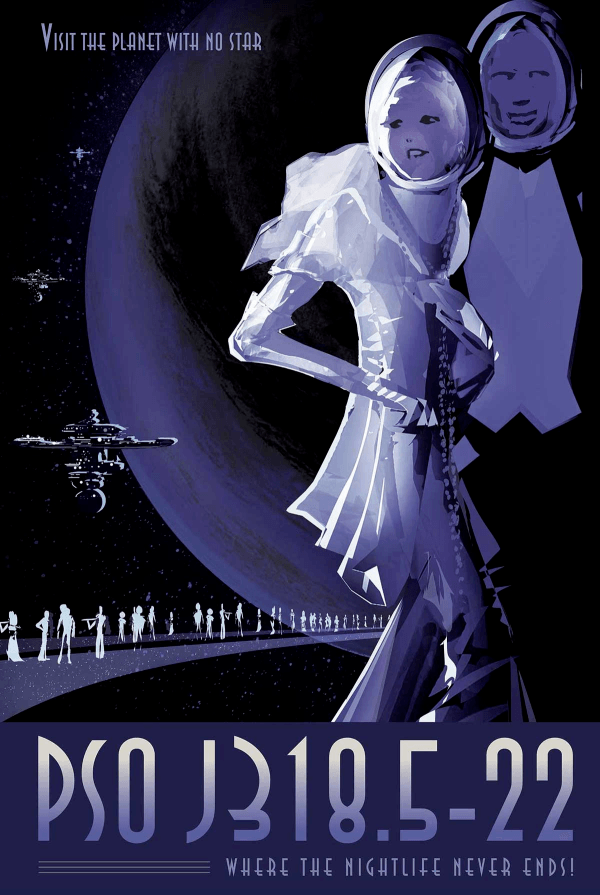 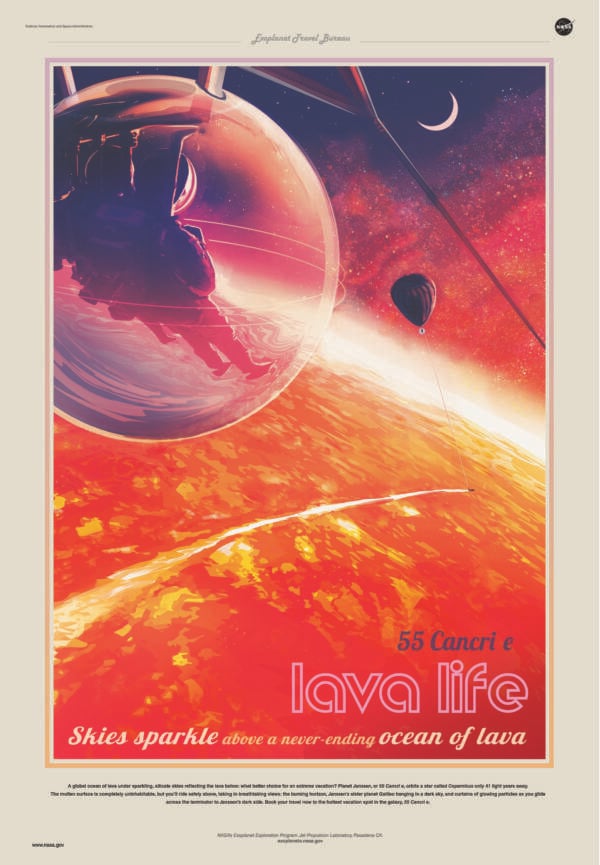 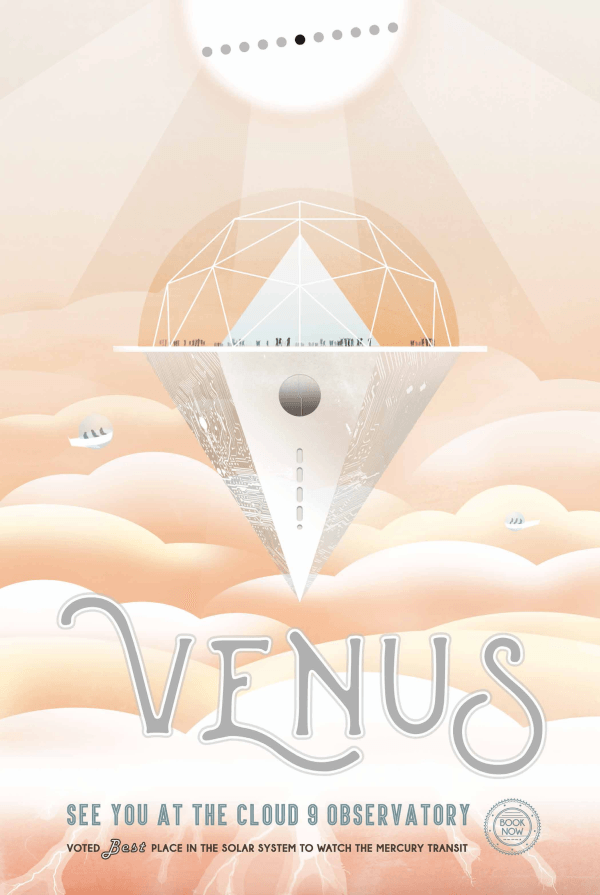 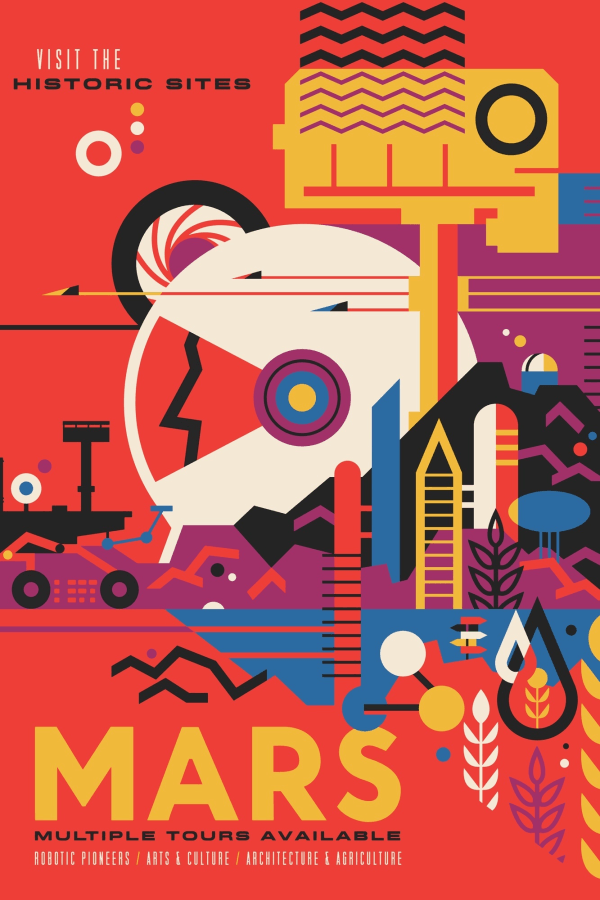 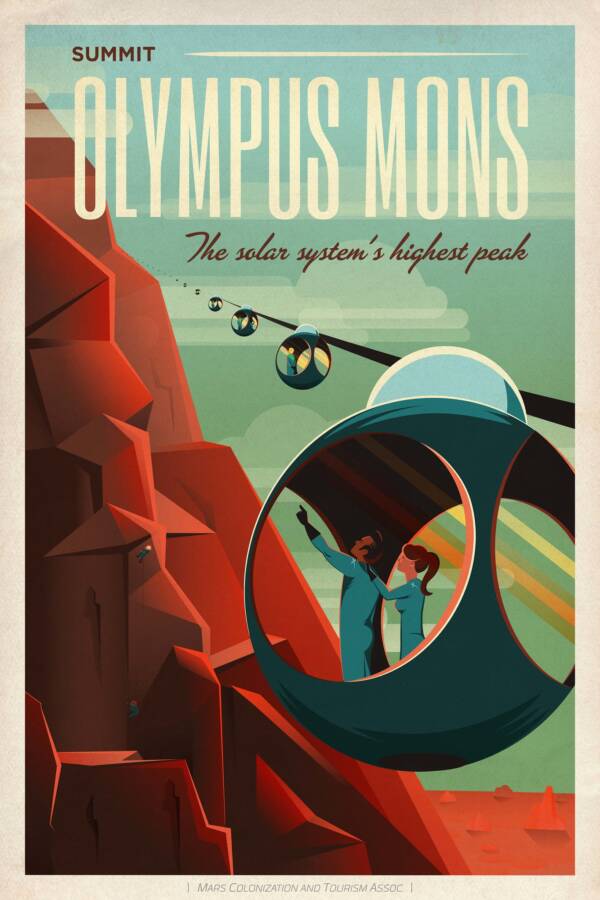 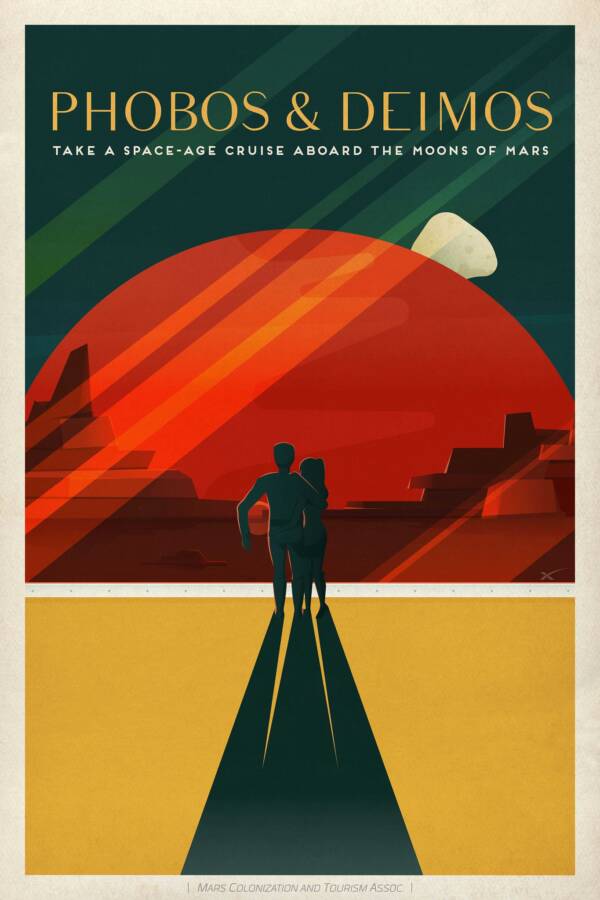 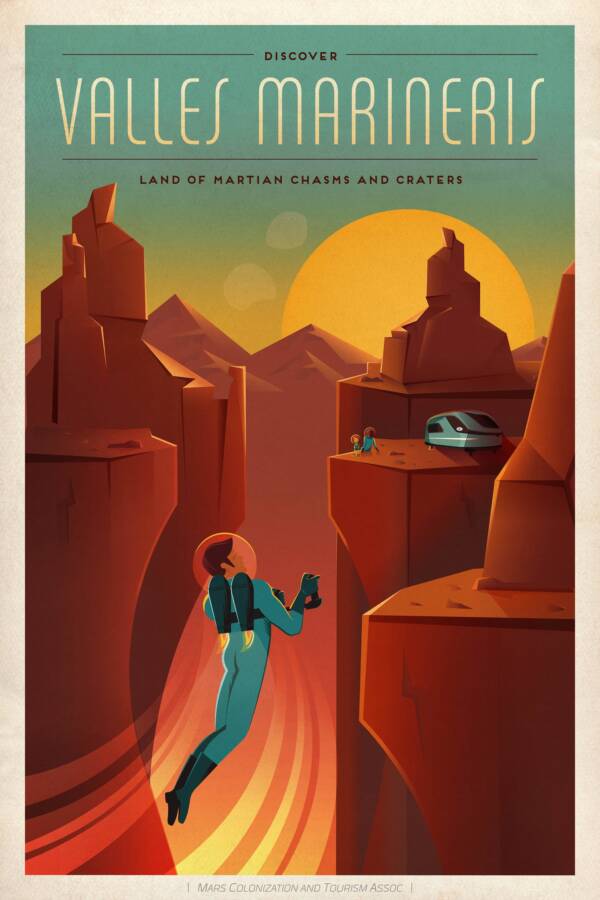 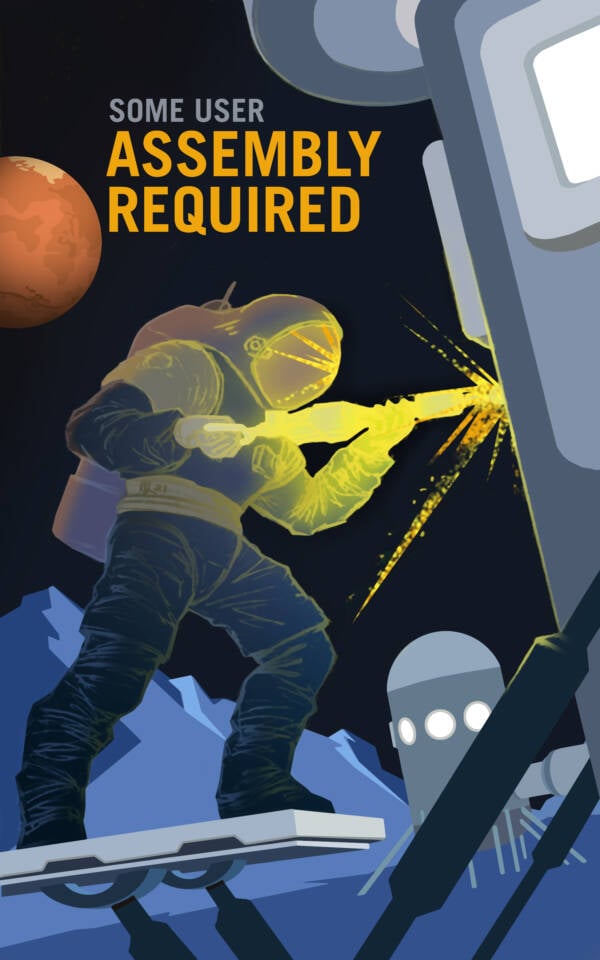 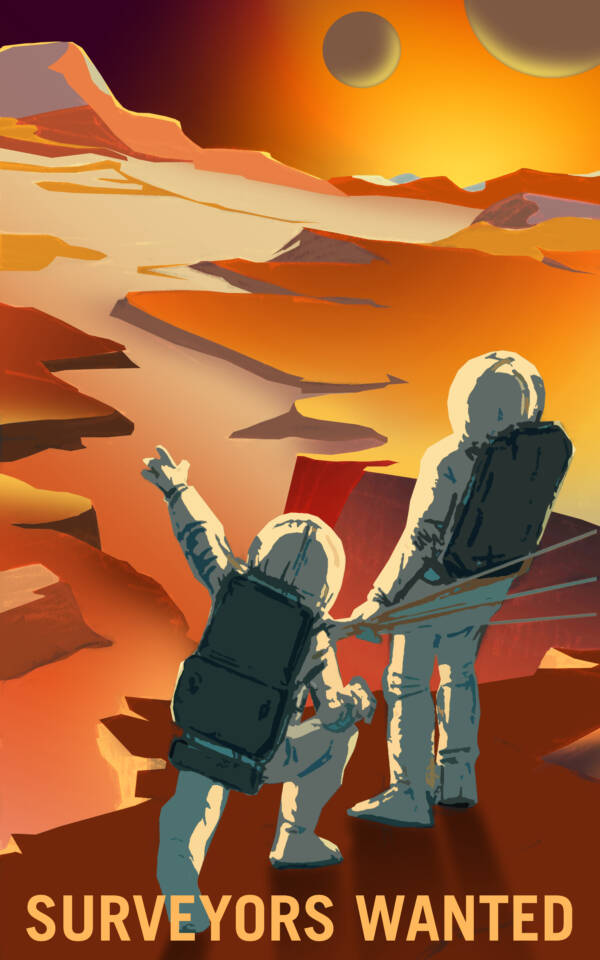 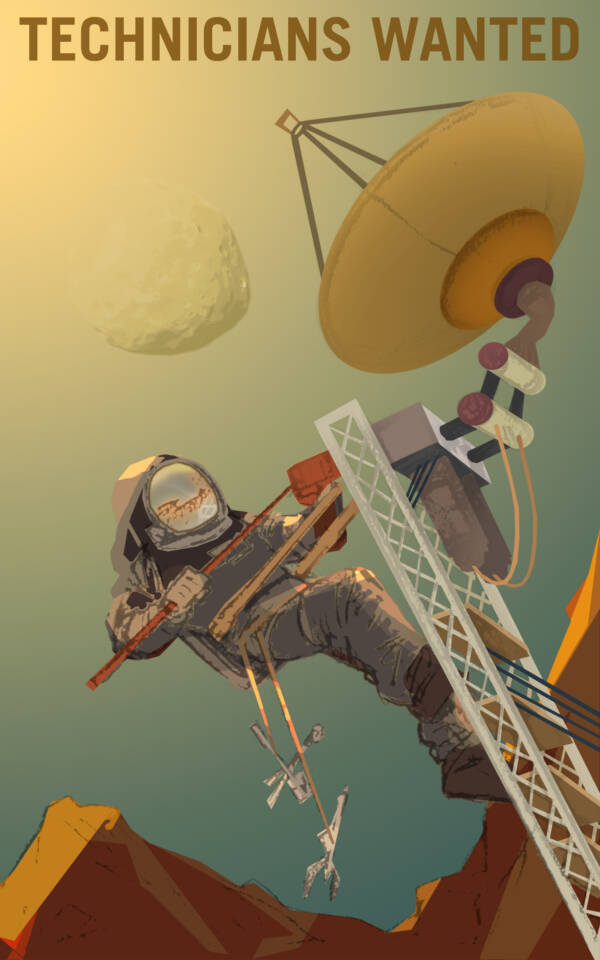 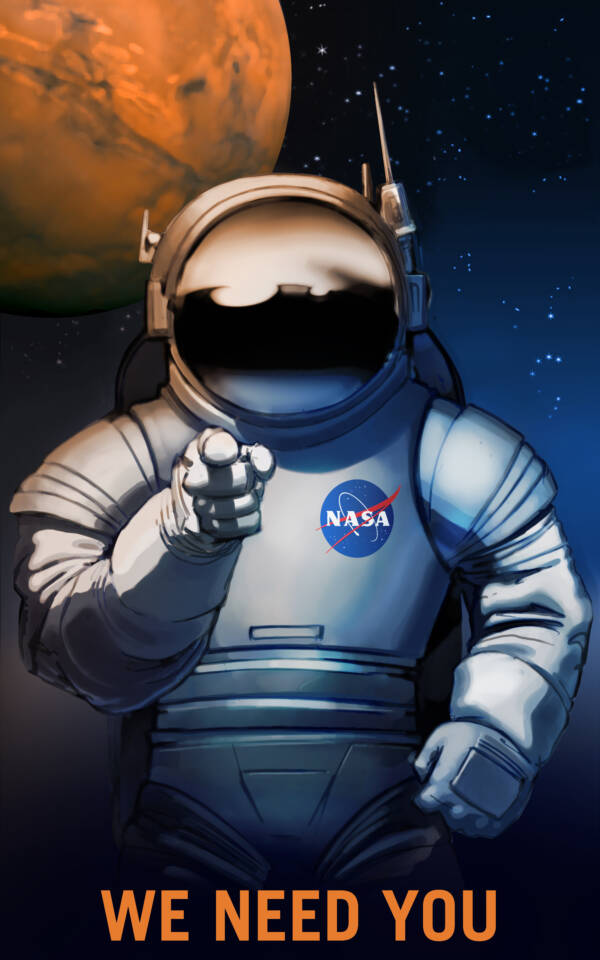 1 of 24
This was the first poster designed for NASA's "Visions of the Future" series, and the retro-futuristic inspiration was clear from the very beginning.NASA/JPL
2 of 24
Some 40 light-years from Earth, a planet called TRAPPIST-1e offers heart-stopping views. Brilliant objects in a red sky loom like versions of our own Moon. But these "moons" are actually Earth-sized planets — which are part of a system outside of our own.NASA/JPL
3 of 24
Saturn's largest moon, Titan, has a thick atmosphere, an organic-rich chemistry, and a surface shaped by rivers and lakes of liquid ethane and methane. NASA/JPL
4 of 24
Jupiter's moon Europa is a fascinating destination. Beneath its icy surface, Europa is believed to conceal a global ocean of salty liquid water — twice the volume of Earth's oceans.NASA/JPL
5 of 24
The basis for this poster was a Jupiter cloudscape by artist Ron Miller. In talking with a lead scientist on NASA's Juno mission, he locked onto his description of Jupiter's brilliant auroras and created a truly beautiful print as a result.NASA/JPL
6 of 24
NASA's Voyager mission took advantage of a once-every-175-years alignment of the outer planets for a grand tour of the solar system. Just imagine if ordinary people could take a guided tour of this incredible phenomenon.NASA/JPL
7 of 24
The big sign in this poster is inspired by the gateway in Reno that announces it as "the biggest little city in the world." Ceres is the biggest object in the asteroid belt between Mars and Jupiter, which makes it a fitting comparison to Reno. NASA/JPL
8 of 24
The poster for Saturn's moon Enceladus is all about the plumes erupting from its south pole.NASA/JPL
9 of 24
Earth is the only place we know of with life — and lots of it. It's our one true oasis, and this poster captures it perfectly.NASA/JPL
10 of 24
In 1995, scientists discovered 51 Pegasi b — the first extrasolar planet confirmed to orbit a Sun-like star — forever changing the way we see the universe and our place in it.NASA/JPL
11 of 24
Super Earths — bigger Earth-like planets with more gravity — would be good destinations for thrill-seekers.NASA/JPL
12 of 24
This poster explores how plants might look different on planets that orbit other stars, since the star's spectrum of light would be different than our Sun.NASA/JPL
13 of 24
This design comes from the tagline, "Where the nightlife never ends," which is perfect for a wandering planet that has no star. To evoke a sense of elegance, designers leaned heavily on 1930s art deco. But even though it's a retro-future fantasy, there's still some real science inspiring it.NASA/JPL
14 of 24
Planet Janssen, or 55 Cancri e, orbits a star called Copernicus that is only 41 light-years away. The molten surface is completely uninhabitable, but one could imagine riding safely above the inferno, taking in the views.NASA/JPL
15 of 24
The intent of the series was to show images that people might find pleasant — and the surface of Venus is anything but. This posed a challenge to the artists, who ultimately decided to create a "cloud nine observatory" above the planet.NASA/JPL
16 of 24
This poster imagines a future time when humans are on Mars, and their history reveres the robotic pioneers that came first. (The rover's wheel is spelling out JPL on the ground in Morse code, just like the Curiosity Rover does.)NASA/JPL
17 of 24
SpaceX also joined in the retro-futuristic poster trend. Olympus Mons is a large shield volcano on the planet Mars — and this poster imagines what it might be like to see "the solar system's highest peak" up close.SpaceX/Flickr
18 of 24
The two moons of Mars are Phobos and Deimos. They are named after the Greek mythological twin characters of Phobos and Deimos — who accompanied their father Ares into battle. Just imagine if we could take a space "cruise" to explore both of them.SpaceX/Flickr
19 of 24
Valles Marineris is a system of canyons that runs along the Martian surface east of the Tharsis region. It is one of the largest canyons of the solar system, surpassed in length only by the rift valleys of Earth.SpaceX/Flickr
20 of 24
NASA's "Journey to Mars" poster series depicts possible job openings on Mars in retro-futuristic prints. NASA
21 of 24
Anyone want to become a "surveyor" who gets to explore Mars and its moons on a regular basis?NASA
22 of 24
People with unique talents will always be in demand to work in outer space — regardless of where future missions take us.NASA
23 of 24
A take on Uncle Sam's famous poster. NASA wants YOU to join them on Mars!NASA
24 of 24 From the first Moon landing to orbits around planet Earth, there's no question that the first golden age of space travel yielded some thrilling adventures. But what will the next golden age look like? These NASA space travel posters explore the possibilities — by using retro-futurism.

Referring to the past's vision of the future, retro-futurism has been celebrated in countless artworks. Many of these pieces depict what people from the past thought that the future might look like. While it may seem strange to create retro-futuristic illustrations today, it's a good fit for something like the future of space travel — which is often hard to predict.

Courtesy of NASA's Jet Propulsion Laboratory (JPL), these illustrations imagine a future in which we're able to casually travel our solar system like we do our Earth. What if we could hop from planet to planet like we do cities? Explore this fantastical vision in the gallery above.

How NASA Created 'Visions Of The Future' 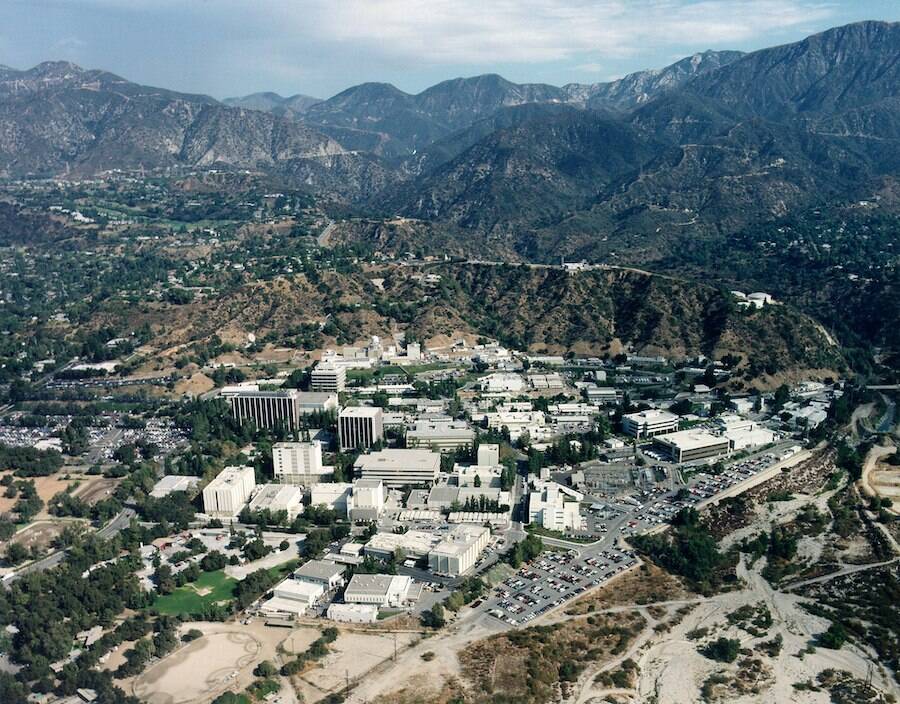 A creative team of resident designers and illustrators at JPL designed the NASA space travel posters in 2016. While JPL is mostly known for its creation of robotic spacecrafts that explore far-off planets, there's no denying that people who work there have a talent for art as well.

Nine artists were involved in creating the prints, but they didn't work alone. Before they began illustrating, they consulted with NASA scientists and engineers — and got their feedback throughout the entire creative process. Even though these images are largely based on fantasy, the artists wanted at least some aspects to be based on science.

Interestingly enough, the posters actually started out as a series about exoplanets. But then, the director of JPL took a trip to the Grand Canyon and saw a travel poster that reminded him of the poster design for the exoplanet. Soon after, the idea was born to give a "touristy" treatment to other places in the solar system that the JPL was exploring.

When it came to style, the NASA space travel posters gravitated toward a "retro-future" look, inspired by vintage national park posters. Recreating the nostalgia of those prints was the goal — as was sharing the sense of possibility that exists within all those distant locales. The director of JPL called the artists from the studio "architects of the future."

So it was only fitting that the final series was titled "Visions of the Future."

A Retro-Futuristic Vision Of Space Travel 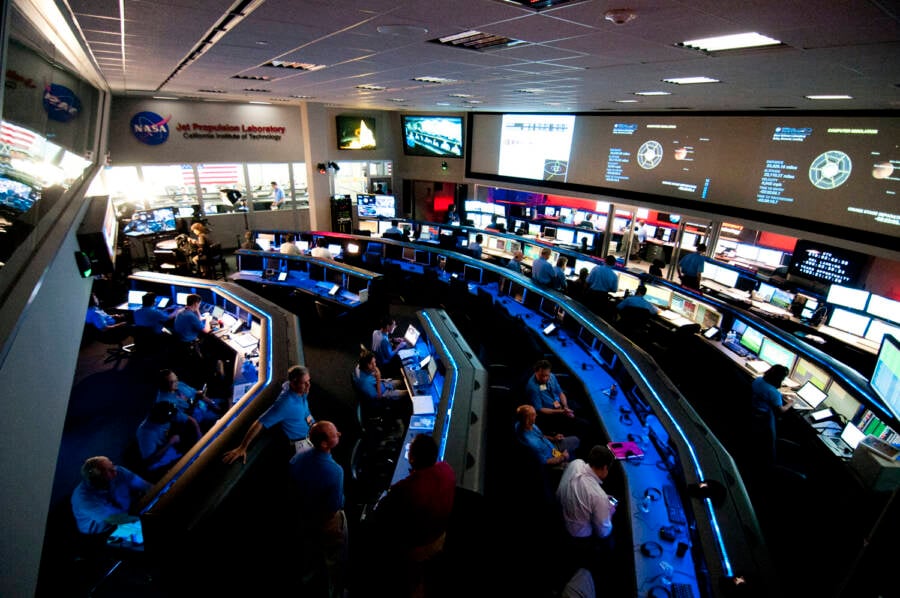 NASA The Space Flight Operations Center at NASA's Jet Propulsion Laboratory, pictured in 2012. There, engineers command spacecrafts within and outside of our solar system.

While many people today may believe that fantastical forms of space travel are unthinkable, these NASA posters bring alive the hope that one day it will be possible to hop in a spacecraft and visit these faraway places.

Aside from drawing up potential blueprints for space travel, the collection aims to invoke nostalgia for places that we've never been, but have dreamed about visiting someday. While a real trip to Jupiter or Pluto might be a long way off, these illustrations make it seem like they're just a short ride away.

But even if we don't see the day when we can easily book a trip to Mars, there's no question it'll be interesting to look back at these images years from now and see what has changed with space travel — and what hasn't.

After all, retro-futurism is a relatively new concept that we've only recently started to explore. It first emerged in the wake of the technological advances of the 1970s and '80s. By that point, depictions of the future that people of the past had created began to look far-fetched. Still, people found nostalgia in these quaint ideas, and hence, the name was born.

And even though some retro-futuristic images are laughable, the dreamers of the past got at least a few things right. Self-driving cars are just about here. Video conferencing and wrist accessories that play TV shows are everyday realities. And automated systems are in use inside many homes. So in many ways, the future is already here on Earth.

Only time will tell if the same will be true for new types of space travel.

Return to the first golden age of space travel with these vintage NASA photos. Then, see what NASA retro-futurism looked like in the 1970s with these renderings of their proposed space colonies.