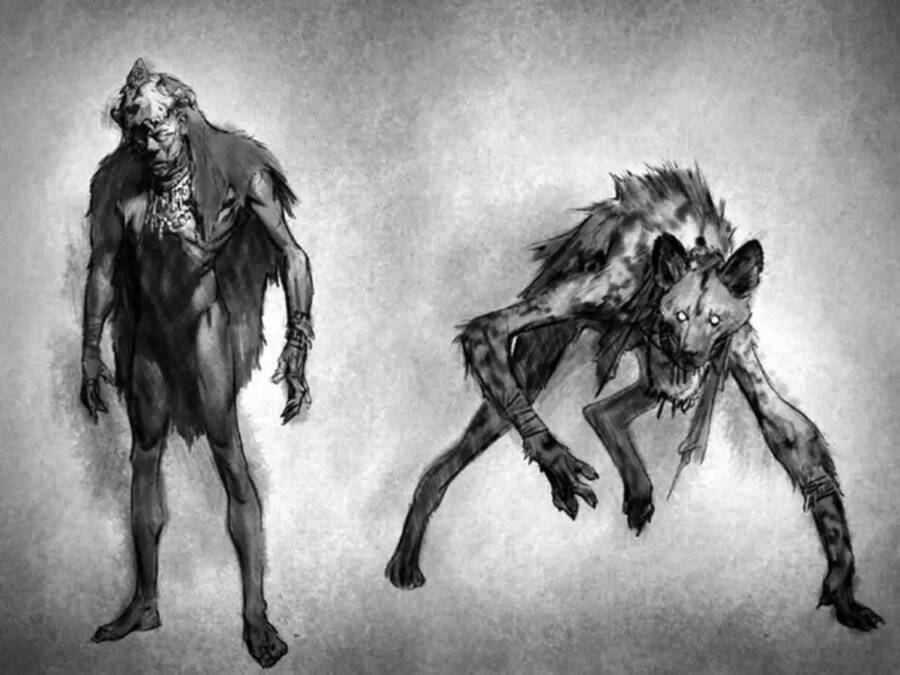 Mystery WireThe Navajo believe that just speaking of a Skinwalker could draw one of these shapeshifting monsters to you.

Skinwalkers are animalistic humanoid creatures chronicled in the centuries-old folklore of various Native American tribes of the United States Southwest, most notably the Navajo, Pueblo, Apache, and Hopi peoples. It is one of many shapeshifting monsters from Native American legends.

Skinwalkers are typically described with a beastly and deformed body, a marred albeit humanoid face, and blazing orange-red eyes. But the origins of these creatures vary among tribal cultures.

Some traditions say Skinwalkers are powerful medicine men who succumbed to the temptation of using their abilities for evil. Other traditions claim that the Skinwalkers are the punitive form of any man, woman, or child who commits a deep sin.

In any case, the myth of the Skinwalkers is well-known among Indigenous communities. These Native American monsters are described as incredibly powerful and nearly immortal. They can only be killed with a bullet or knife dipped in white ash — a bit reminiscent of a shapeshifter from popular culture, the werewolf, and its weakness to silver bullets.

Investigations into the unexplained events at Skinwalker Ranch were the focus of a documentary series on the History Channel.

However, among Indigenous cultures, it is reportedly taboo to speak aloud of Skinwalkers. Navajo culture dictates that talking about these supernatural creatures is bad luck and makes their appearance more likely. Hence, members of the Navajo nation are reluctant to speak about Skinwalkers to non-natives.

Nevertheless, the greater public caught wind of the terrifying Native American legend. In 1996, The Deseret News published a story about a Utah family that had been traumatized by chilling events around their ranch, including the unexplained slaughter of their livestock, which were found dead with strange mutilations.

Eyewitnesses claim to have seen an unidentifiable animal that was remarkably agile and made hellish sounds. Strange things continued on the ranch after the family moved. The property is now known as Skinwalker Ranch and is a notorious hotbed for paranormal activity.

Since then, Skinwalkers have become increasingly ubiquitous in popular culture. The terrifying events associated with these beasts are depicted on HBO’s The Outsider (based on the Stephen King novel) and investigated in The Secret Of Skinwalker Ranch, a documentary series on the History Channel.

It’s important to note that public understanding of these Native American monsters is inadequate due to the understandable reluctance of Navajo people to discuss them with outsiders. One reason, as Native scholar Adrienne Keene contends, is the misuse of such lore by non-native writers, which can have a harmful impact on native communities.

“Rowling is completely re-writing these traditions. Traditions that come from a particular context, place, understanding, and truth,” wrote Keene about author J.K. Rowling’s clumsy infusion of the Navajo legend into an offshoot of Harry Potter.

“These things are not ‘misunderstood wizards.’ Not by any stretch of the imagination.”