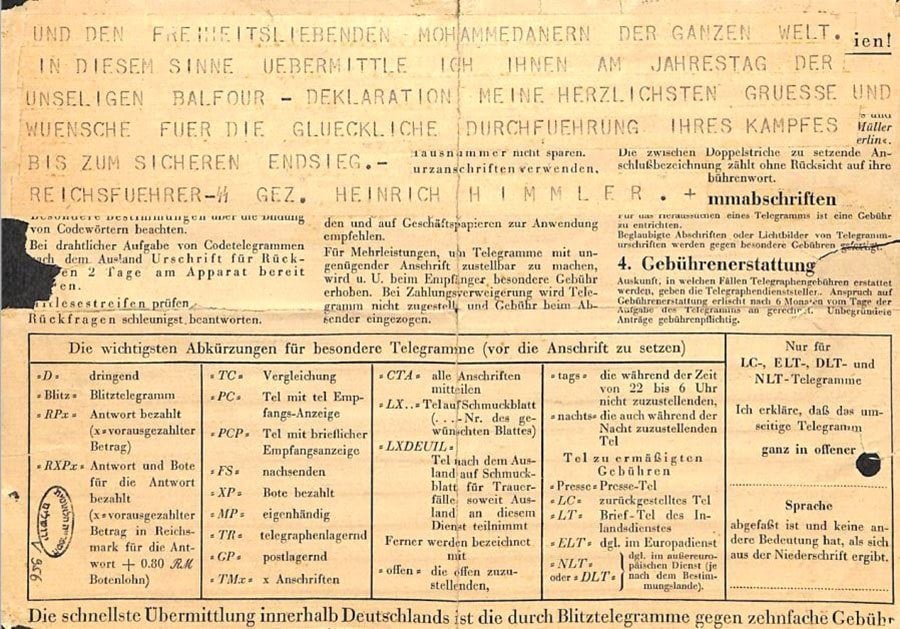 International conflicts can make for some curious bedfellows, and a recently rediscovered telegraph from World War II serves as an apt reminder of that.

On Wednesday, the National Library of Israel published a missive sent by Heinrich Himmler, Adolf Hitler’s second in command, to Haj Amin al-Husseini, the Grand Mufti of Jerusalem and a Palestinian nationalist.

In the letter, which archivists believe Himmler sent in 1943, the Nazi higher-up offered “warm wishes for your continued struggle against the Jewish invaders until the great victory.”

Himmler added that, in his view, the Nazi movement and the Arab people in Palestine had much in common.

“The common recognition of the enemy, and the joint struggle against it, are what form the solid foundation between Germany and the freedom-loving Muslims all over the world,” Himmler wrote.

He concluded the note by wishing al-Husseini a happy anniversary of “the unfortunate Balfour Declaration,” a document which in 1917 expressed Great Britain’s support for a Jewish state in Palestine.

If al-Husseini’s name sounds familiar, that’s because Israeli Prime Minister Benjamin Netanyahu has invoked it in attempts to curry or deepen anti-Palestinian sentiment. In October 2015, for instance, Netanyahu made the erroneous claim that al-Husseini was the mastermind of the Holocaust — that when al-Husseini visited Hitler in November 1941, it was al-Husseini who recommended killing the Jews instead of simply expelling them.

While al-Husseini’s comments during the meeting (full text available here), did make it clear that “the English, the Jews, and the Communists,” were shared enemies of the Arabs and the Nazis, little else bears out Netanyahu’s remarks.

For instance, as TIME notes, a large pile of data show that the Nazis had already decided to implement the “Final Solution” some months prior. As Hitler said during the meeting, the issue already “was resolved, step by step, to attack one European nation after the other to solve its Jewish problem, and at the proper time to direct a similar appeal to non-European nations as well.”

Historians well-versed in this period of time say that it was really al-Husseini’s desire to rid Arabs of colonial rule — and to keep European Jews from fleeing to Palestine — that prompted his visit to Berlin.

Hitler, who at the time believed German victory was in sight, was not interested in al-Husseini’s vision of Arab independence.

“The mufti failed to achieve most of his goals,” Esther Webman, senior research fellow at the Dayan Center for Middle Eastern and African Studies at Tel Aviv University, told the Times of Israel. “Nazi Germany did not declare its support for the idea of Arab independence and the Nazi leadership exploited it in order to achieve its own goals.”

For more in-depth coverage on non-European motivations for supporting the Nazis, check out this post on the Free Arabian Legion.