The Mystery Of Nefertiti, The Powerful Ancient Egyptian Queen Who Suddenly Vanished

After presiding over ancient Egypt with unprecedented power, Queen Nefertiti mysteriously vanished from the historical record in 1336 B.C. But some believe she secretly took her husband's place as pharaoh after he died.

The bust of Nefertiti is perhaps one of the most iconic and copied works of ancient Egyptian art in the world — and with good reason.

The renowned queen reigned over ancient Egypt during a time of enormous cultural upheaval, as she and her husband Pharaoh Akhenaten restructured Egypt’s political and religious focus. She also held unprecedented clout as a woman in Egyptian court.

But then in the 12th year of her husband’s 17-year rule, Nefertiti suddenly vanished from the historical record.

The disappearance of queen Nefertiti has baffled historians for centuries, turning her life and legacy into an object of supreme fascination. 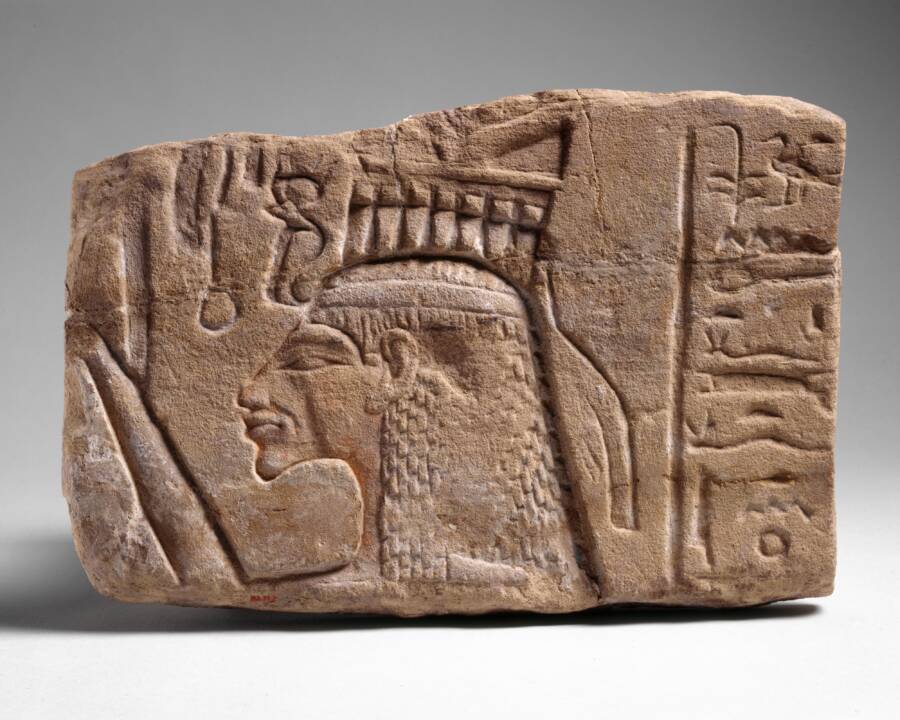 Met MuseumNefertiti translates to “the beautiful one has come.”

While little is known about her origins, it is believed that Nefertiti was born around 1370 B.C. and was perhaps raised in the town of Akhmim where she was also the niece or daughter of an official named Ay.

Ay was a top advisor who eventually became pharaoh when King Tutankhamun later died in 1323 B.C. Other historians, however, posit that Nefertiti was actually a princess who hailed from the Mittani Kingdom in northern Syria. It was common for ancient Egyptians to favor one god over the other, and Nefertiti was said to favor the Egyptian sun god Aten.

Regardless of her origins, Nefertiti married Amenhotep IV, the son of Amenhotep III, when she was 15. Amenhotep III, otherwise known as Amenhotep the Magnificent, was the ninth pharaoh of the 18th Dynasty. Throughout this dynasty, Egyptians who favored the god of the Sun and air, Amun, had grown quite powerful and had garnered as much wealth and prestige as to challenge the power of the pharaoh by the time Amenhotep IV took the throne.

When he ascended to the throne in Thebes around 1353 B.C., Amenhotep IV and Nefertiti began to make great changes to Egyptian society. He discontinued the religious practices as they were in Egypt, closed the temples, and removed power from the cult of Amun in favor of his and Nefertiti’s preferred god, Aten. 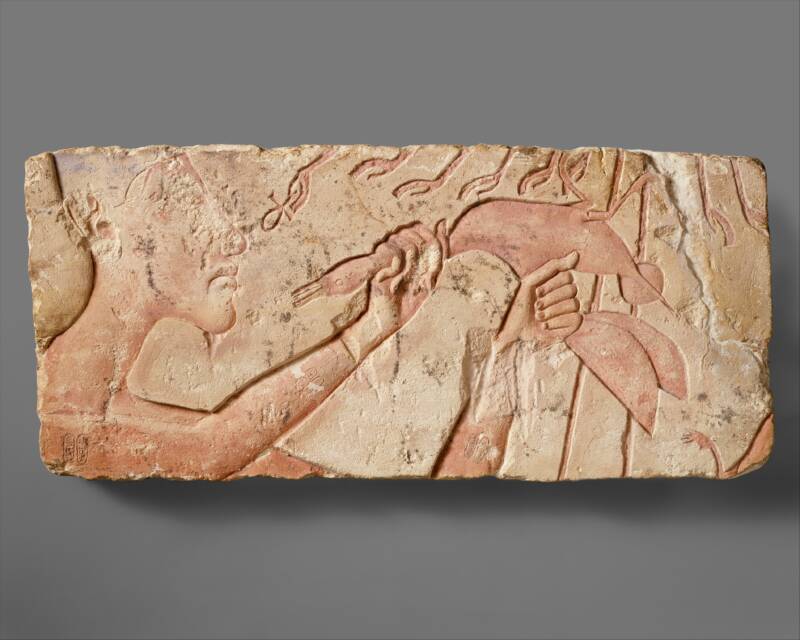 Met MuseumA relief shows Akhenaten sacrificing a duck, from circa 1353 B.C. The couple also had six daughters together, two of whom Akhenaten is said to have married and perhaps had children with.

Amenhotep IV made Aten the central focus of religious life and desecrated the names and imagery of Amun. He built a series of temples to Aten in the temple complex of Karnak near Luxor in his first year.

Egyptologist James Allen observed that Amenhotep even worked to change the plural “gods” to the singular “god.” Historians believe this change signified his desire to consolidate power under himself and Nefertiti alone.

Then, in the fifth year of his reign, Amenhotep IV changed his name to Akhenaten, which translates to the “Living Spirit of Aten.”

Nefertiti added “Neferneferuaten” onto her name, which in full translated to “Beautiful are the beauties of Aten, a Beautiful Woman has come.”

The couple then moved the capitol northward, closer to the sun, in Amarna. They ruled with such unprecedented power that it’s even believed Nefertiti may have been a Pharaoh herself.

She May Have Reigned As Pharaoh 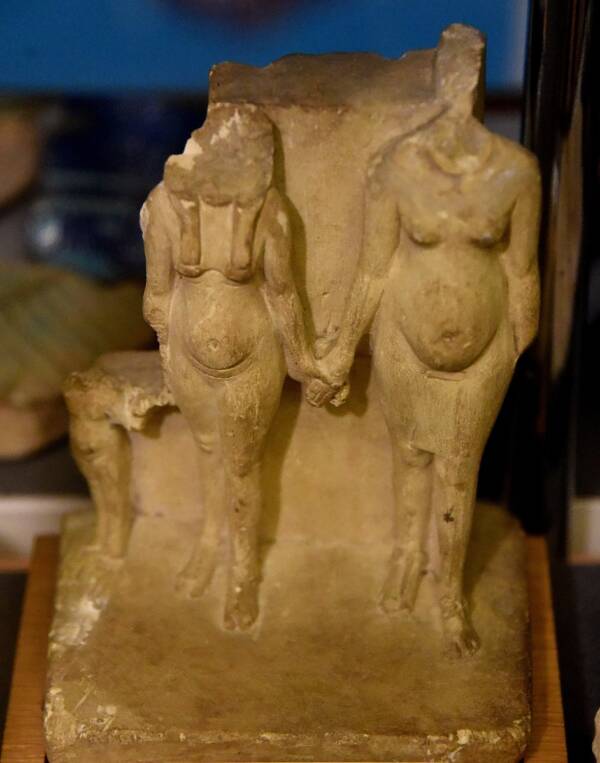 Wikimedia CommonsAkhenaten and Nefertiti were depicted together with such frequency that many believe the two held equal power over Egypt.

The idealized imagery of earlier pharaohs was done away with. Depictions of Akhenaten included rather feminine hips and highly exaggerated features, while the imagery of Nefertiti slowly progressed into being virtually indistinguishable from Akhenaten.

This was a clear departure from her earlier imagery as a stereotypical young woman. Her final depictions during Akhenaten’s reign returned to a more realistic version, albeit far more regal than her pre-royal depictions, which suggested that she held equal power over Egypt.

The walls of temples and tombs constructed during Akhenaten’s rule showed Nefertiti alongside the pharaoh with such frequency that Egyptologists and historians believe they ruled side by side. No other Egyptian queen has been depicted alongside her pharaoh as frequently as Nefertiti. 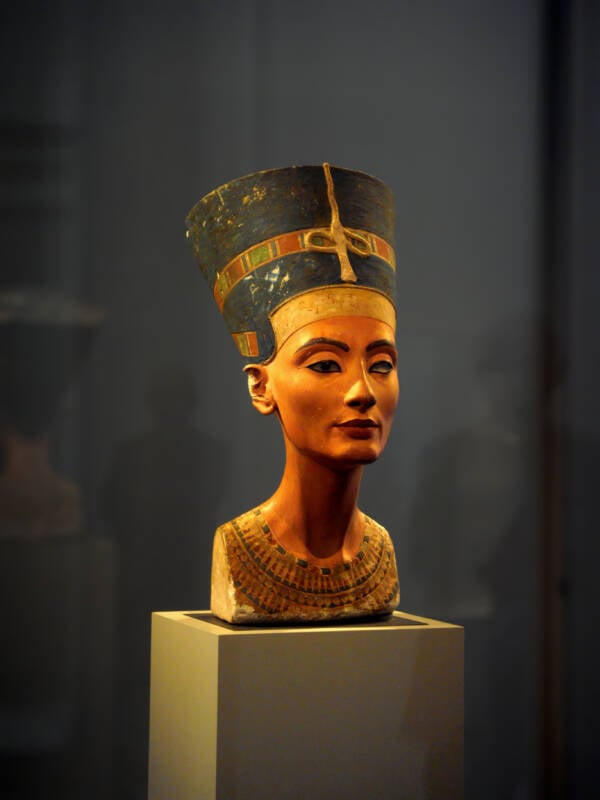 FlickrIn 1912, the bust of Nefertiti was discovered in Amarna, Egypt by German archaeologist Ludwig Borchardt.

Numerous depictions showed Queen Nefertiti in positions of power, from defeating an enemy in battle, to leading the worship of Aten, to commanding a chariot. She was even explicitly depicted in numerous reliefs wearing the crown of a pharaoh.

After she gave birth to six daughters, Akhenaten took other wives — including his own sister, with whom he fathered King Tutankhamen. King Tut would eventually take Nefertiti’s third daughter, Ankhesenamun, as his wife.

But despite affecting such substantial changes in religious and cultural worship and potentially co-ruling Egypt, Nefertiti suddenly vanished.

The Mysterious Death Of Queen Nefertiti 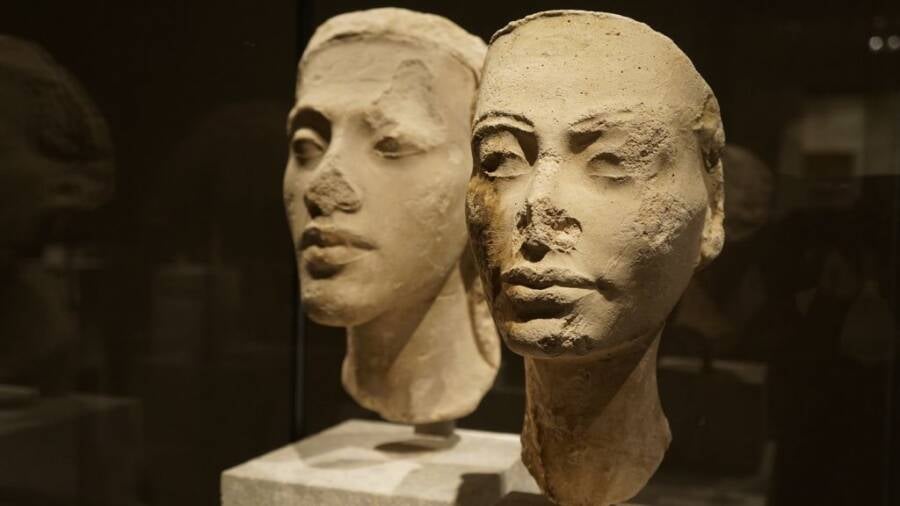 Neues MuseumThe busts of Akhenaten and Nefertiti at the Neues Museum in Berlin.

After 12 years of presiding over Egypt with her husband, Queen Nefertiti disappeared from any and all depictions. To this day, no consensus among historians exists as to what became of her, though most scholars have concluded that she simply died.

A more tantalizing theory shared by other experts is that she fooled the public — and dressed herself as a man. This would have occurred after Akhenaten elevated her status from queen to co-regent, with equal power to the pharaoh, for which there is no clear evidence.

Another thesis proposes that Nefertiti was driven out of Egypt when worship of Amen-Ra was reintroduced following Akhenaten’s reign. Yet another sect of scholars suggest that Nefertiti ruled as pharaoh by herself. These historians argue that it was Akhenaten who died, and that his successor Pharaoh Smenkhkare was actually Nefertiti in disguise.

Unfortunately, there’s a lack of primary evidence to support any of these assertions. 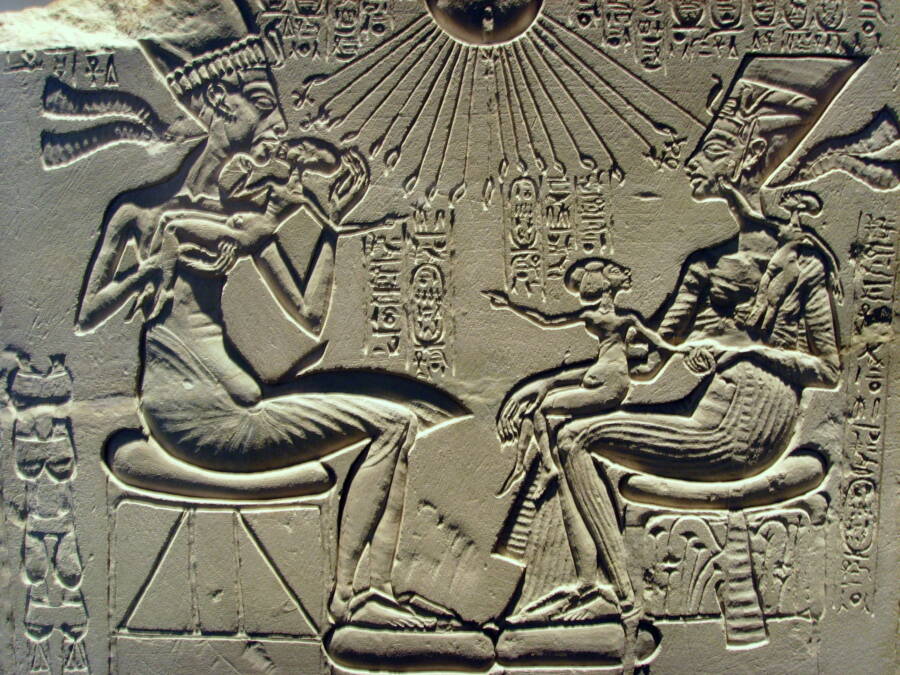 If Akhenaten did die, it is possible that as the new pharaoh, Nefertiti reversed her husband’s religious policies. It is known that during Akhenaten’s reign, Nefertiti ordered a scribe to make divine offerings to Amun, desperately pleading for the god to return in was an attempt to control the upheaval caused by her husband’s religious conversion.

The notion that she disguised herself as a man, too, is not without precedent. Female pharaoh Hatshepsut ruled Egypt under such pretenses herself, during the 15th century B.C.; she even used a ceremonial false beard.

Lastly, some believe that Akhenaten had Nefertiti banished as she was incapable of producing a male heir and still others believe Nefertiti committed suicide when her daughter Mekitaten died during childbirth at age 13. None of these can be substantiated, either. 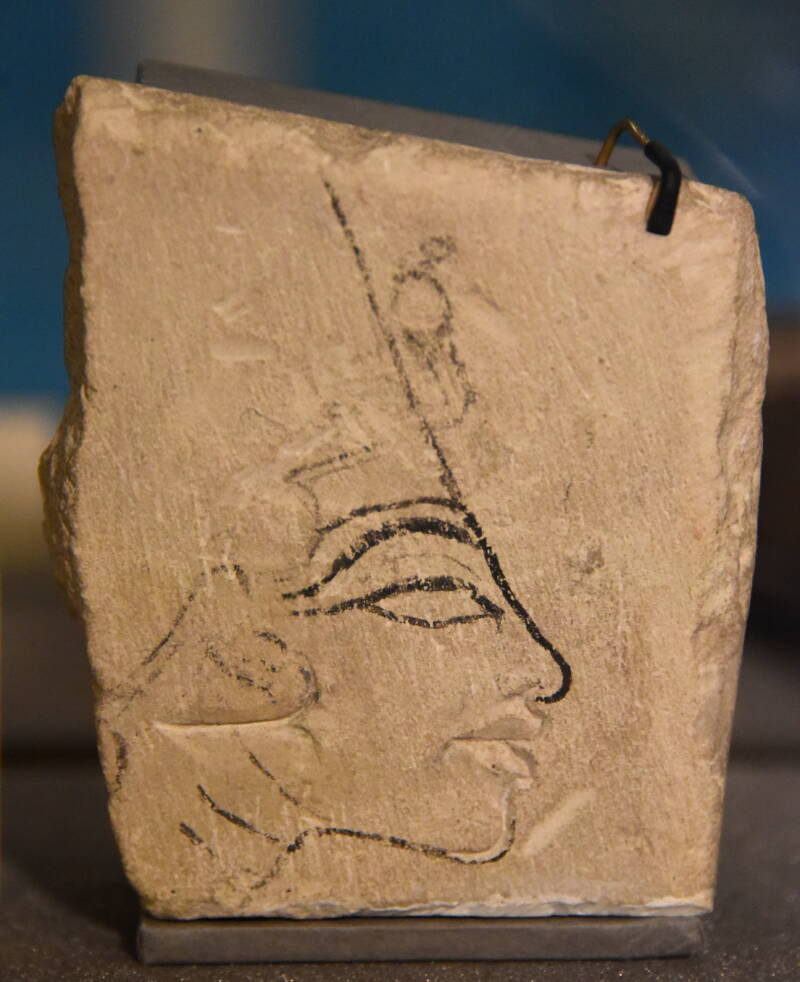 But in 2015, Egyptologist Nicholas Reeves and archaeologist Mamdouh Eldamaty found what they believe to be a hidden doorway within Tutankhamoun’s tomb. Inside it contains structural anomalies that hint at a secret room which may hold the sarcophagus of Nefertiti.

Nefertiti’s Tomb May Have Been Found

In February 2020, a study published in the journal Nature detailed a promising ground-penetrating radar (GPR) survey around King Tutankhamun’s tomb. The findings lent credence to Reeves’s theory that the king’s burial palace contained a larger, hidden tomb within.

“Clearly there is something on the other side of the north wall of the burial chamber,” he said.

While the potential for additional, hidden chambers beyond King Tut’s tomb has been debated among scholars for decades, some have dismissed the idea entirely while others have hired private companies to investigate. So far, nobody has either opened or entered the hidden room in question.

In addition to Eldamaty’s data, the fact that Nefertiti’s daughter was married to King Tut lends circumstantial credibility to the notion her body was placed in his burial palace.

As of now, however, what is left of Nefertiti are the ancient depictions, theories, and relics such as the revered limestone bust on display at Berlin’s Neues Museum. Discovered in 1912 by the German Oriental Company in Amarna — the capitol during Akhenaten’s reign — the bust was found in the workshop of an ancient Egyptian sculptor, Thutmose. 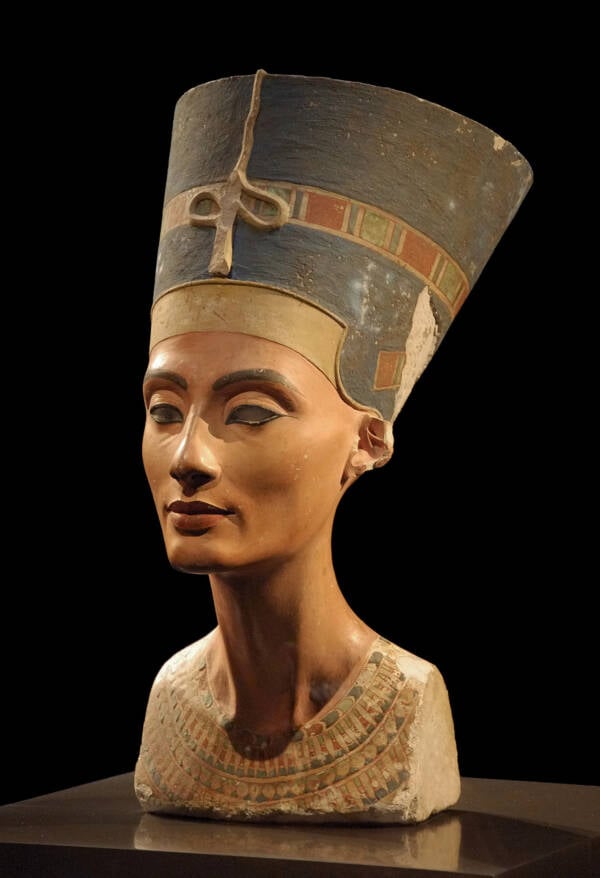 Wikimedia CommonsSome believe the bust of Nefertiti in Berlin is a fake or that the absence of her left iris meant that she suffered from an ophthalmic infection. Nonetheless, it’s the most copied ancient Egyptian work in the world.

Lead archaeologist Ludwig Borchardt recounted the discovery in his diary, “Suddenly we had in our hands the most alive Egyptian artwork. You cannot describe it with words. You must see it.”

The world’s response to the sculpture has since been as profound as Borchardt’s — it remains one of the most popular attractions at the museum in Berlin.

Not only is the sculpture world-famous, but the bust of Nefertiti is one of the most copied works from ancient Egypt. Millennia after her mysterious demise, Nefertiti continues to effect art and our perspective of the past. Her legacy of power and beauty is truly one to behold.

After learning about the life and mysterious death of ancient Egypt’s Nefertiti, see how archaeologists think that the pyramids were built. Then, check out stunning photos of Egypt before the British took over.