Inside Neuschwanstein Castle, The Fairy-Tale Palace With A Heartbreaking Secret

Nestled deep in the Bavarian Alps atop a picturesque hill sits Germany’s Neuschwanstein Castle, its silhouette looking like something straight out of a fairy tale.

Surrounded by cliffs, a moat, and a charming little town, the castle appears untouched by time. It stands as an everlasting testament to the fantastic imagination of King Ludwig II, who commissioned the building in 1868. 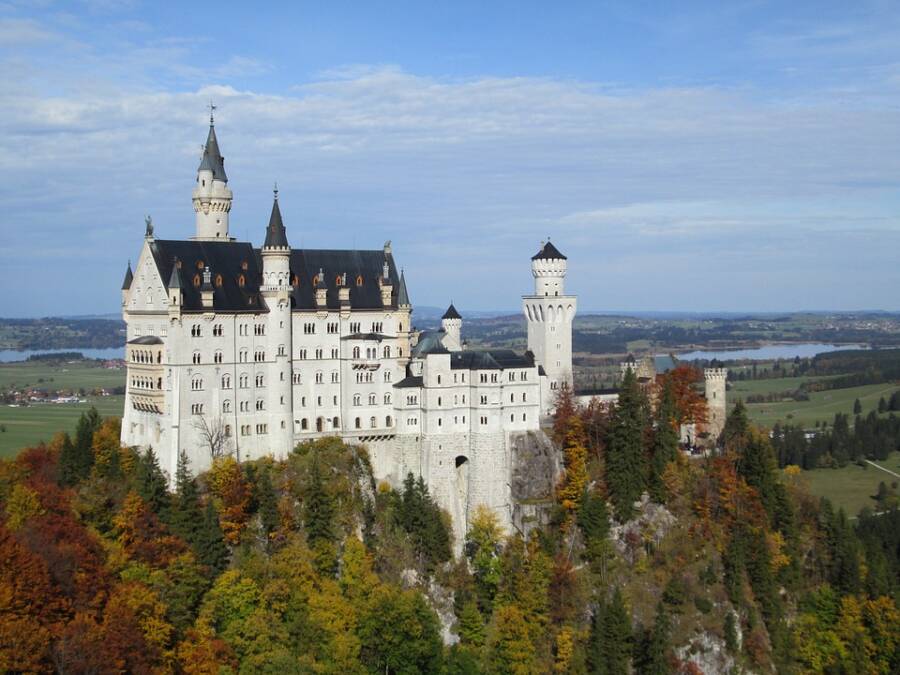 But Neuschwanstein is also part of a sadder story, one about the unforgiving distance between fantasy and reality — and the price that dreamers who mix the two sometimes pay.

King Ludwig II Builds A Castle In The Air 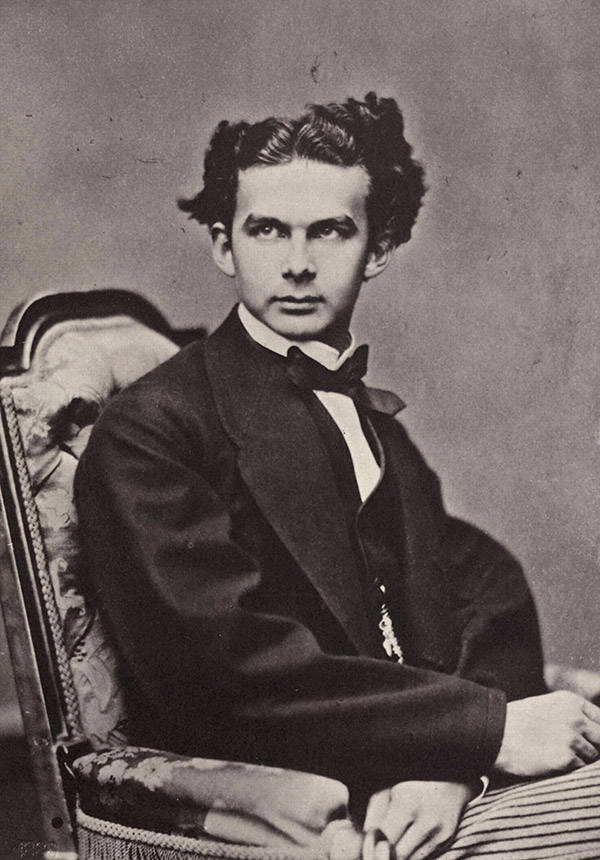 King Ludwig II always had an eye for the beautiful and a taste for the fantastic.

As a child, he grew up at Hohenschwangau Castle in southern Germany. Between tapestries and life-size frescos of German heroes, he did his best to escape the strict royal upbringing dictated by his authoritarian father.

He pursued the fruits of imagination, falling in love with the operas of Richard Wagner (whom he would later save from financial ruin with his patronage), play-acting, and reciting romances. 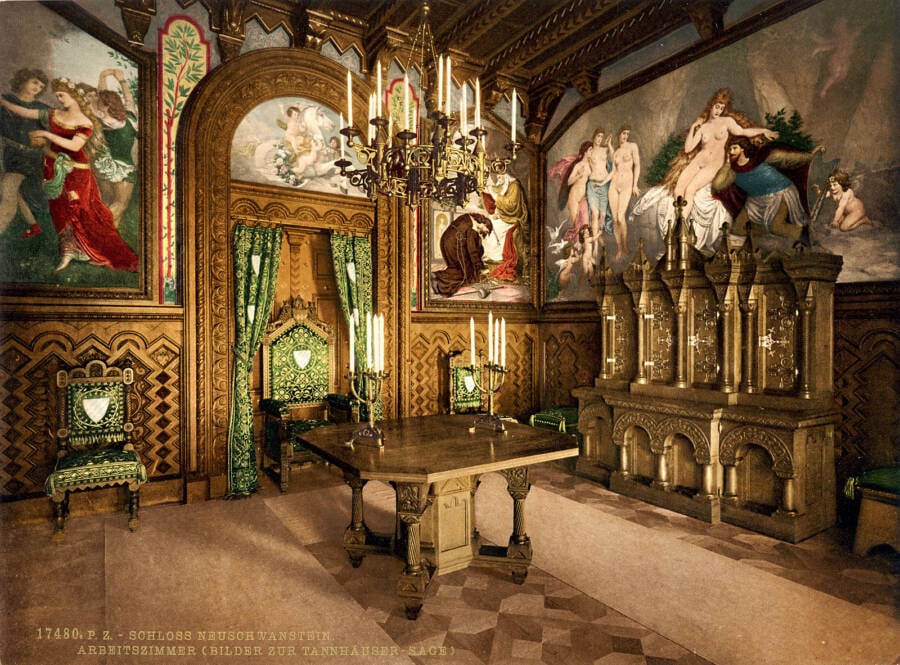 Joseph Albert/Wikimedia CommonsLudwig II’s love of Richard Wagner is clearly on display inside Neuschwanstein Castle. This room is decorated with scenes inspired by Wagner’s Tannhäuser. 1886.

When he took the throne in 1864 at the age of 18, he was everything a fairy-tale royal should be: handsome, poetic, generous to his people, and popular.

But he wasn’t practical, experienced in statecraft, or even remotely interested in the daily business of government.

He avoided Munich like the plague, frequently disappeared from state functions, and disregarded growing international tensions. Before long, he had his ministers in an uproar.

Ludwig II only reigned for two years until Bavaria’s foreign policy and military powers were both seized by Prussia.

After that, his rulership was in name only. Stripped of all real power, Ludwig dreamed of a place where he could still reign supreme. In 1868, he decided that place would be Neuschwanstein Castle. 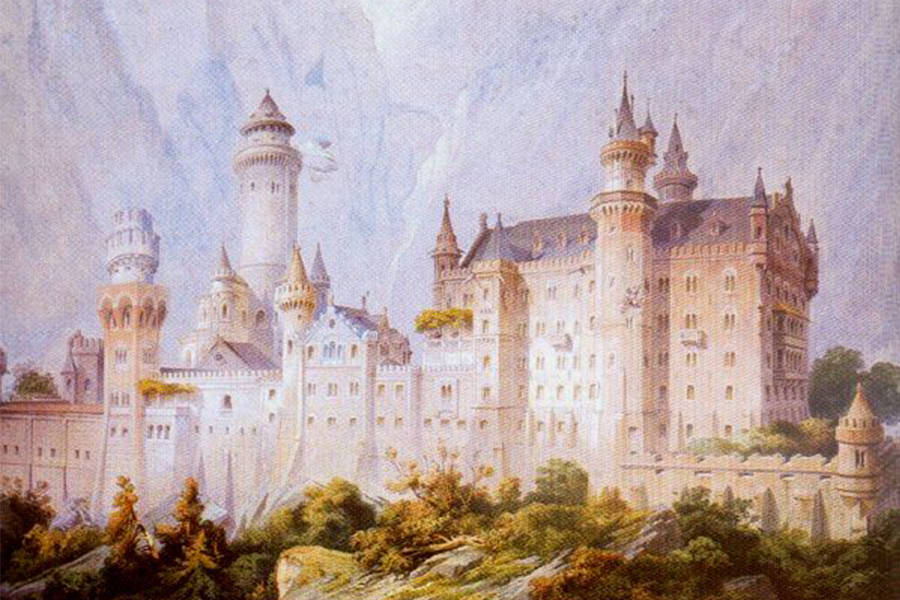 As he broke ground on what would one day be known as Germany’s “Cinderella” castle or “Sleeping Beauty” castle, he described his vision in a letter to Richard Wagner.

He said he wanted to “rebuild the old castle ruin of Hohenschwangau near the Pöllat Gorge in the authentic style of the old German knights’ castles,” complete with “guest rooms with a splendid view of the noble Säuling, the mountains of Tyrol and far across the plain.”

There were to be ornate rooms filled with the finest things imaginable, a hall devoted to music, and a massive courtyard to breathe in the mountain air. 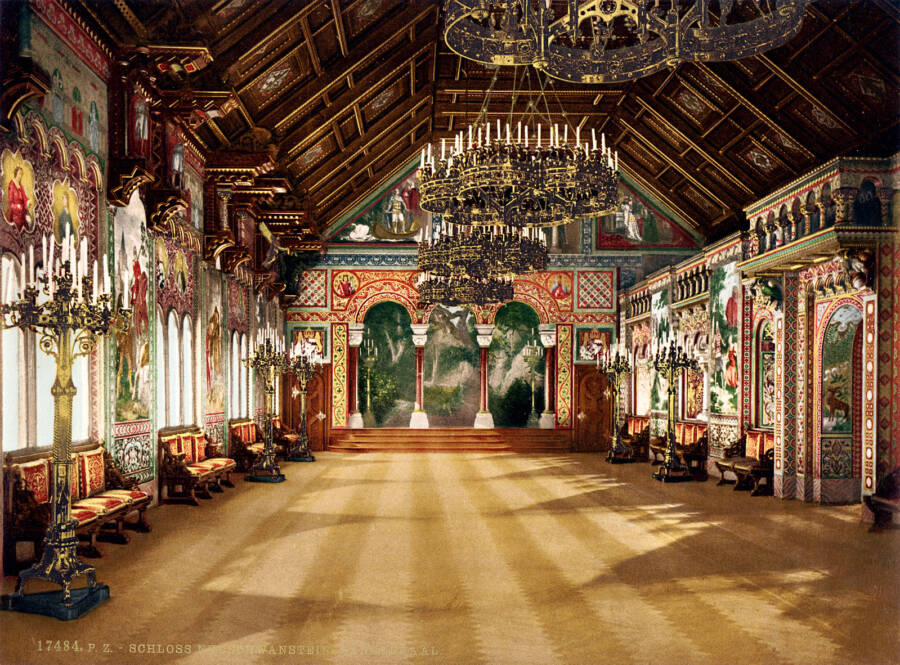 “This castle will be in every way more beautiful and habitable than Hohenschwangau,” he said.

It seems that Ludwig’s vision was achieved.

Built high on a hill, taller than everything around it but the mighty Bavarian Alps, Neuschwanstein Castle was a breathtaking sight, then and now.

Neuschwanstein in glorious detail, with footage taken from a drone.

The sun bounces brilliantly off the bright white limestone of its façades. The turrets are all a deep blue, often mirroring the skies they touch above them. From every angle, it looks like something fit for a fairy tale.

And, indeed, the modern king of fairy tales agreed. During a trip to Europe with his wife, Walt Disney visited Neuschwanstein Castle in Germany and was as charmed by the scene as everyone else.

According to The Orange County Register, Disney used Neuschwanstein as the inspiration for Disneyland’s Sleeping Beauty castle.

But like Sleeping Beauty’s castle, Neuschwanstein had a melancholy secret, a hint of sadness beneath its glossy veneer.

The True Story Behind Neuschwanstein Castle 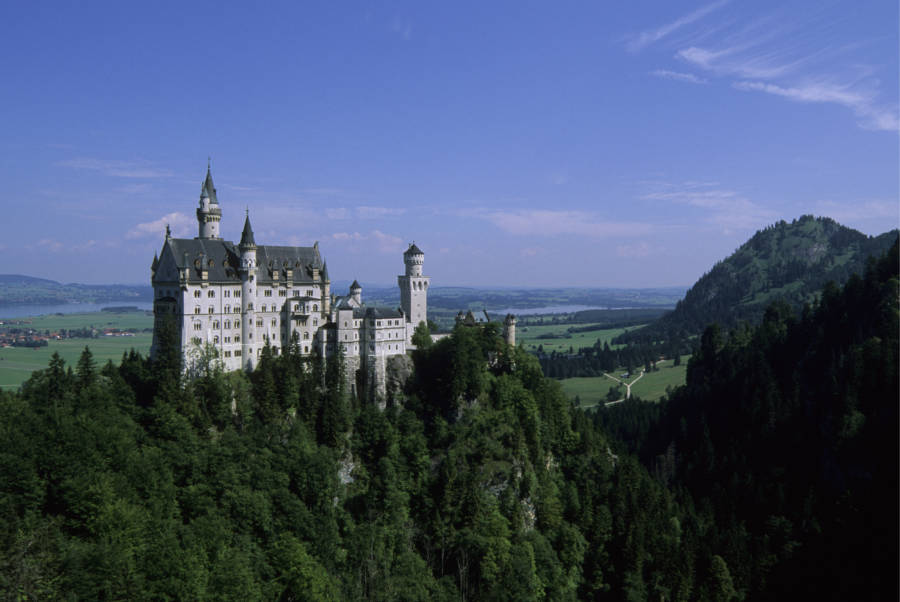 Bettman/Getty ImagesGermany’s “Disney” castle, the inspiration for the Sleeping Beauty palace, as seen from the bridge on the main road.

The first signs of trouble emerged early on in the project.

As with many grand architectural dreams, the costs of construction began to substantially exceed projections. Though his work was employing hundreds of locals and bringing some trade to the poor region, it was also landing Ludwig II in personal debt.

Contrary to popular belief, the Bavarian king did not use state funds for the construction of his castles — but he did use a ton of his own money.

He spent his personal fortune, and when that wasn’t enough, he begged foreign governments for loans. 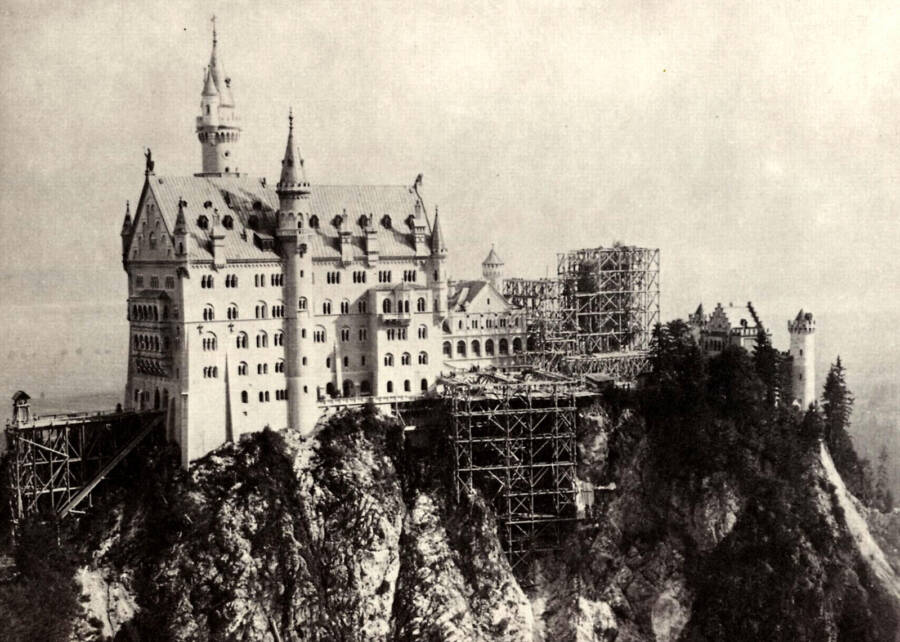 By 1886, Ludwig II was about 14 million marks in debt — almost three times his annual income. Though many of his advisors told him that the extravagant spending had to stop, he was undeterred.

After all, Neuschwanstein Castle wasn’t finished yet. Ludwig II had only just been able to take up residence there to oversee its final stages. The Bavarian king, unwilling to economize, threatened his ministers with dismissal.

Faced with an intractable king, rising debt, and the loss of their positions, the ministers made a dangerous decision: Ludwig II had to go. 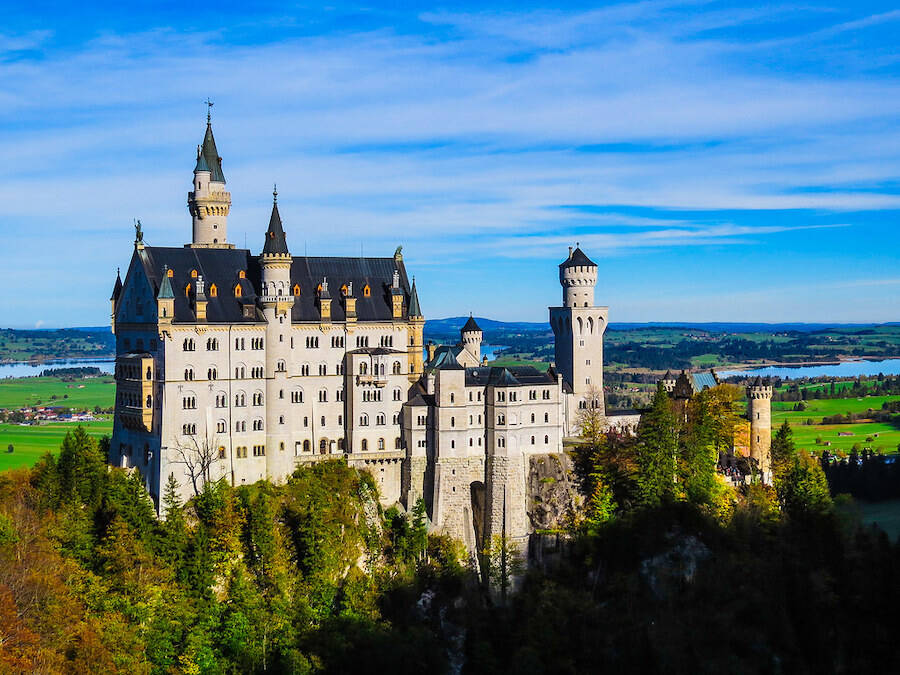 The Bavarian ministers had Ludwig declared insane in 1886.

It was, they felt, a neat solution to a sticky problem. The king, for all his extravagant spending, remained popular, and any challenge to his authority could have sparked controversy and unrest.

But if he was accused of mental incompetence, Ludwig II would find it hard to defend himself, especially since Maximilian Count von Holnstein apparently bribed the king’s servants to spin tales of rages, bizarre and childish behavior, and constant daydreaming.

To a modern reader, the litany of Holnstein’s complaints reads less as proof of insanity than as an account of a cripplingly shy, fantastically imaginative man. He was spoiled, perhaps, and a little vain, but most of all determined to build something beautiful, a private world that he could inhabit when everything else came crashing down. 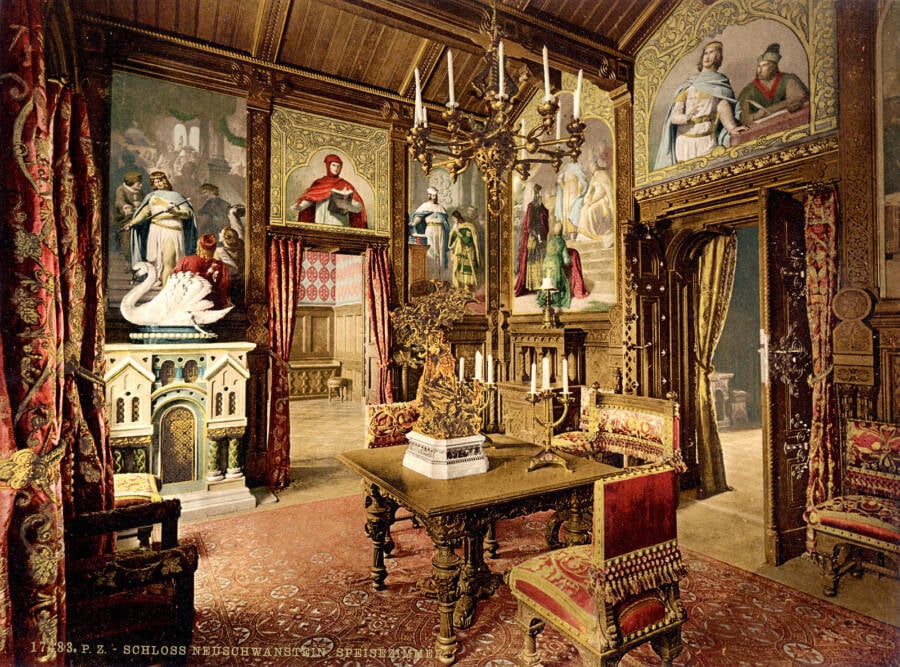 The charges stuck. Four psychiatrists declared him to be suffering from mental illness, just like his younger brother Otto. The madness was apparently hereditary, according to them, and Ludwig was unfit to rule.

On June 10, 1886, a government commission including Holnstein arrived at Neuschwanstein Castle in the early morning. They were met by armed men at the castle gates — a rare occasion when the fanciful, largely decorative structure served a military function.

At one point, the commissioners were arrested. They were only released later after several hours had passed.

Ludwig’s friends advised him to flee, but, perhaps unwilling to part with Neuschwanstein and the home he had built for himself, he delayed. 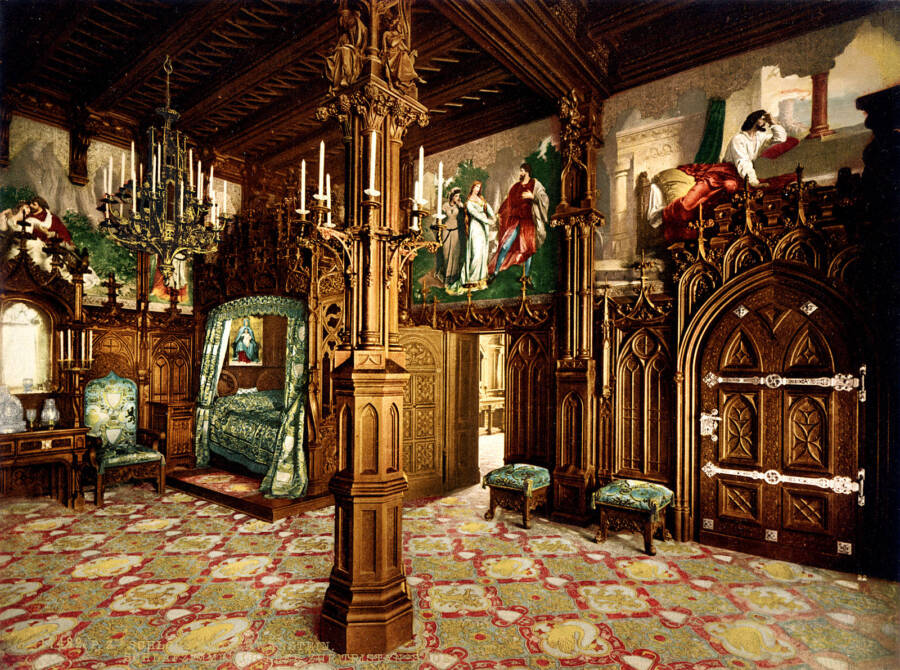 In the end, he waited too long. Two days later, a better-prepared force arrived and took the king into custody. Ludwig was taken to Berg castle, where he was closely monitored by a psychiatrist.

On the evening after his arrest, the pair went for a walk around the nearby lake. When dark fell and neither had returned, a search party was sent out to look for them.

They were found later that night, floating in the dark water — both dead. Although the king’s cause of death was declared to be suicide by drowning, Ludwig reportedly had no water in his lungs at the autopsy.

On top of that, the suicide theory offered no clear explanation for why the psychiatrist had also died.

Even in death, King Ludwig II remained an enigma.

The Legacy Of Germany’s “Disney” Castle 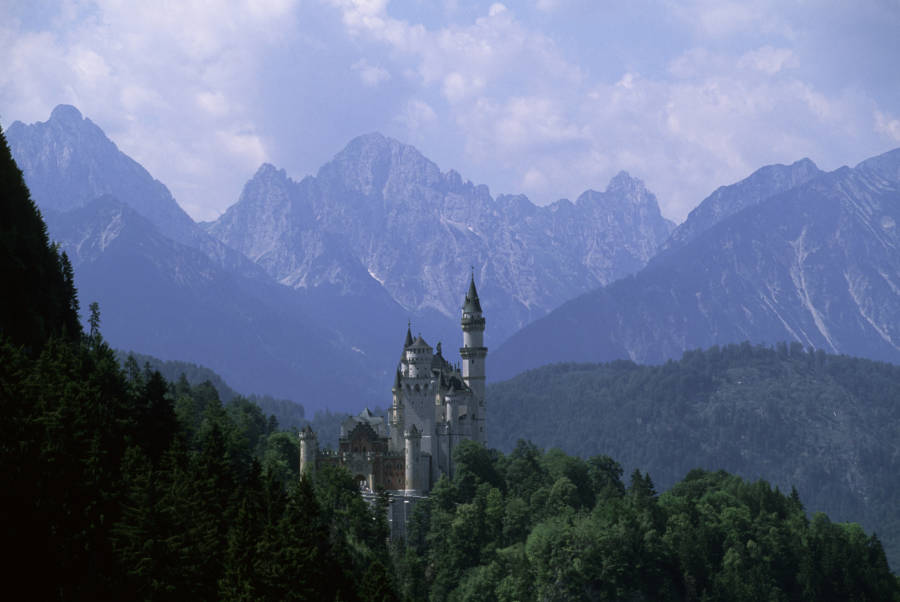 Wolfgang Kaehler/LightRocket via Getty ImagesNeuschwanstein as seen from the gate house.

Though a memorial cross to the famous Bavarian king was later erected in the waters where he died, most feel that Neuschwanstein is the true monument to his memory.

Germany’s “Cinderella” castle, with its fanciful flourishes and impractical beauty, arguably remains the best testament to Ludwig’s spirit — even though, in the end, he didn’t live long enough to see it completed. 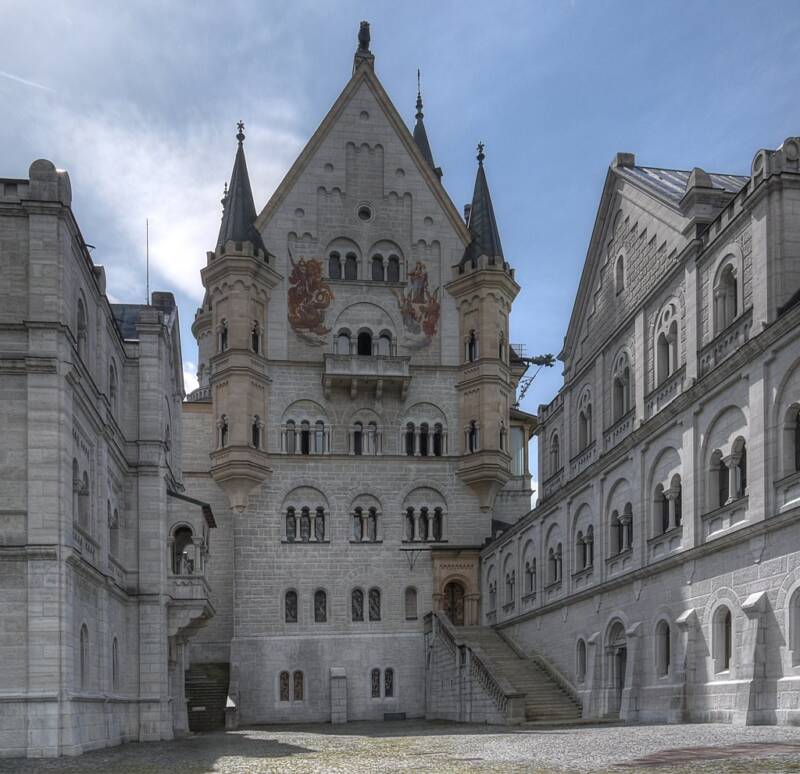 Several weeks after Ludwig’s death, Neuschwanstein Castle was opened to the public. Only 14 rooms were finished, and these are still the only rooms on display for tours.

The rooms are as ornate as Ludwig promised they would be, with ceilings covered in gold, 13-foot chandeliers, floor mosaics, and larger-than-life paintings from some of the greatest artists of the time.

Germany’s “Disney” castle draws more than 1.5 million visitors every year. Ironically, the former home of a reclusive king is now often full of people who come to admire the opulent decor. 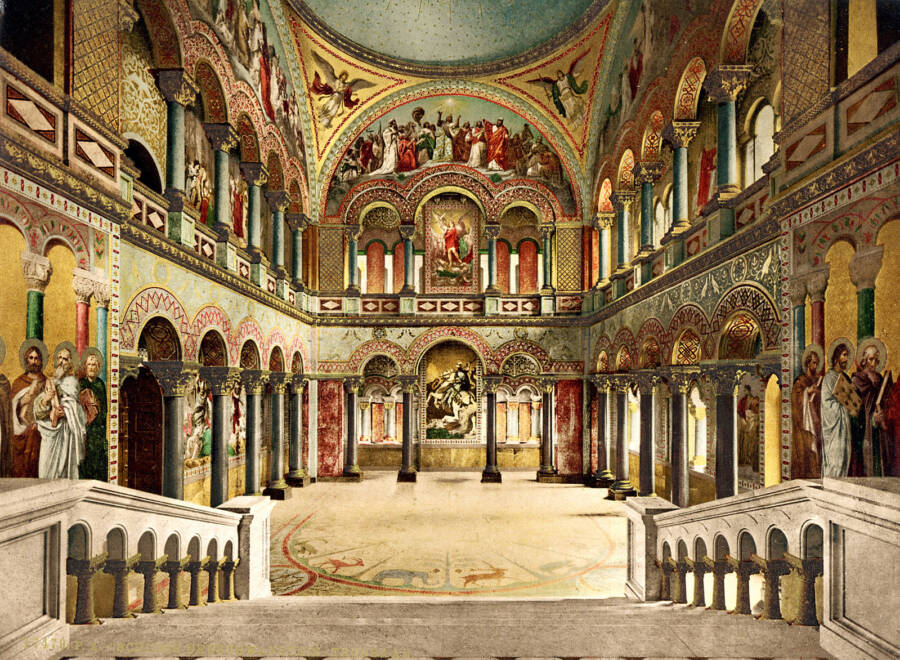 Joseph Albert/Wikimedia CommonsThe throne room inside Neuschwanstein Castle has everything but the throne itself.

Perhaps even more ironic is the important piece of furniture missing from Neuschwanstein Castle: the throne. After the death of the king, the throne he was supposed to sit on was never constructed.

Today, the throne room is still ready, adorned in paintings and gold, but the throne itself is nowhere to be seen, perhaps a testament to the absence of the imaginative king who perished before he could ever rule over his fairy-tale castle.

After reading about Neuschwanstein Castle in Germany, check out this thousand-year-old castle you can buy for a cool $17 million. Then, read about the fairy tales that didn’t end exactly the way Disney said they did.