Kirk Jones had already survived the 16-story drop once, in 2003. But the Michigan man's second attempt did not go so well. 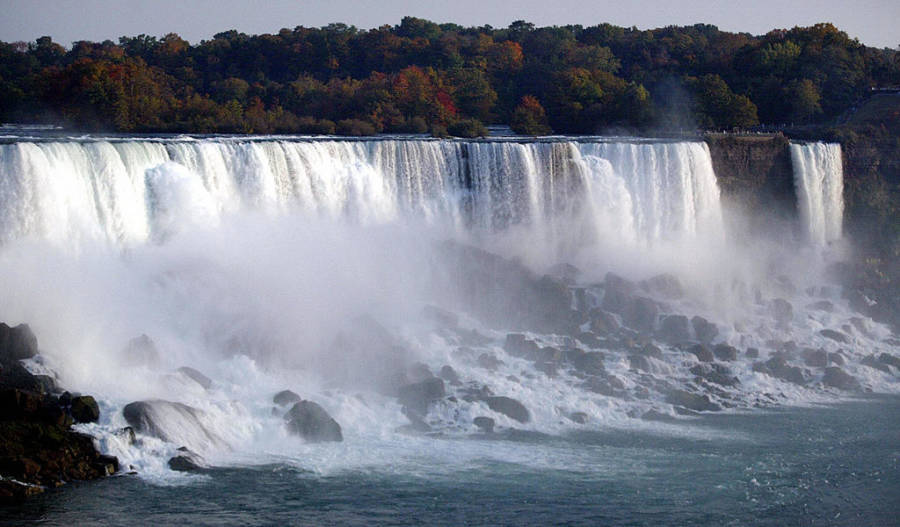 DON EMMERT/AFP/Getty ImagesNiagara Falls as seen from the Canadian side.

To Kirk Jones’ credit, he had already survived the plunge once.

In 2003, he became the first known person to live after tumbling over Niagara Falls without any protection.

Two weeks ago, however, the 54-year-old’s body was found 12 miles downriver from the iconic natural wonder.

It appears that Jones had been trying to repeat his earlier success, since an empty ten-foot-wide inflatable ball was discovered by a tour boat on April 19, when authorities suggest he made his final jump.

Jones’ first adventure over the nearly 200-foot waterfall was actually a failed suicide attempt, according to what the then-40-year-old told police at the time. Instead, he walked away with a couple of bruised ribs and minor scrapes. 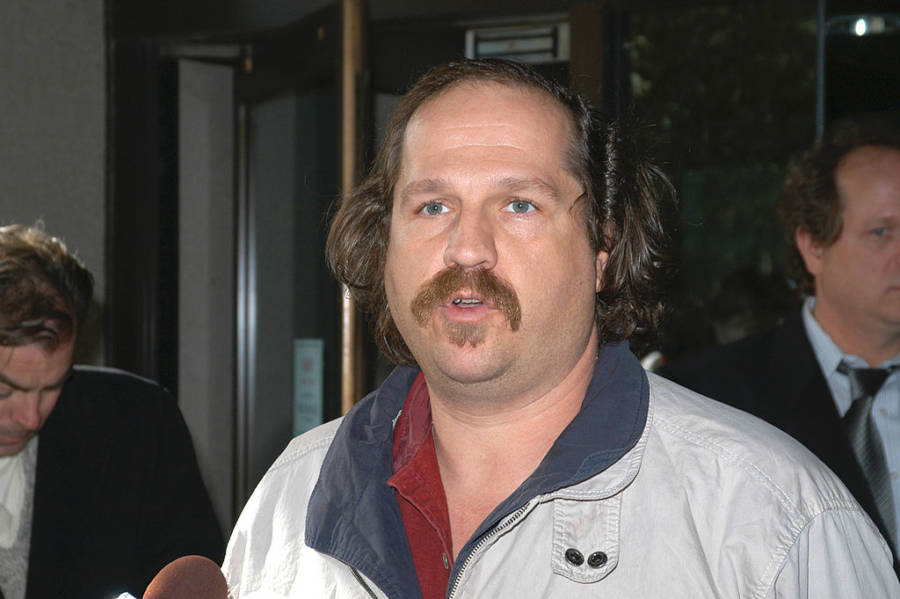 David Wilson Burnham/Getty ImagesNiagara Falls jumper Kirk Jones, 40-years-old, of Canton, Michigan speaks to the media outside St. Catherine’s Courthouse after posting Canadian $1,000 bail in 2003. Jones jumped into the waters on the Canadian side of the falls known as Canadian Horseshoe Falls October 20 and survived the fall without a safety device of any kind. Jones was charged with a felony count of stunting.

Though Jones was the first to survive the 16-story drop with only the clothes on his back, he is far from the only person who has intentionally tumbled down into the gorge.

In 1901, 63-year-old Annie Edson Taylor, a school teacher and certified badass from Michigan, decided to float over the falls in a wooden barrel. She had already sent a house cat named Iagara over in the same barrel. When it survived, Taylor figured she’d be fine. 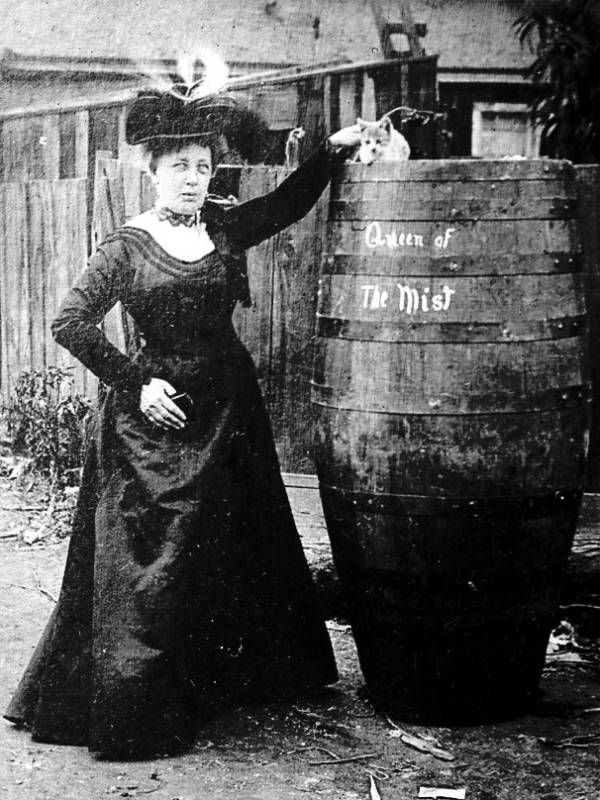 Wikimedia CommonsAnnie Edson poses with her barrel and her cat in 1901.

She came out bloody, but alive. “No one ought ever do that again,” she said.

Fourteen others (15 counting Jones) have attempted to go down in some kind of device or another.

People have gone over in a two-person barrel, on a jet ski, and in a canoe. Some of them survived, some didn’t. Some returned to survive the fall a second time. 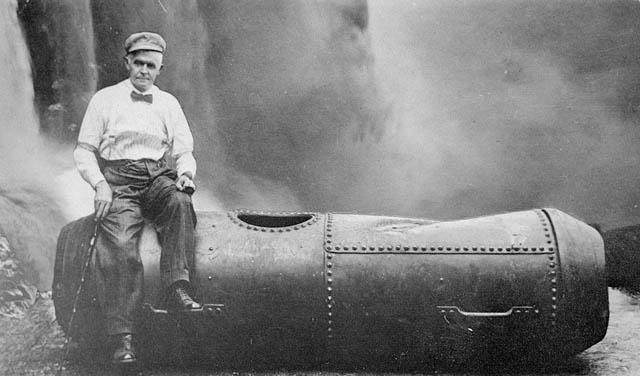 One seven-year-old boy miraculously survived after being accidentally swept over while wearing only a life jacket.

Other stunt artists have made their way across the gorge on tightropes.

The only woman to ever do this was a 23-year-old Italian named Maria Spelterini. In 18 days, she made the trip across four times — once with peach baskets strapped to her feet, once blindfolded and once with her ankles and wrists manacled. 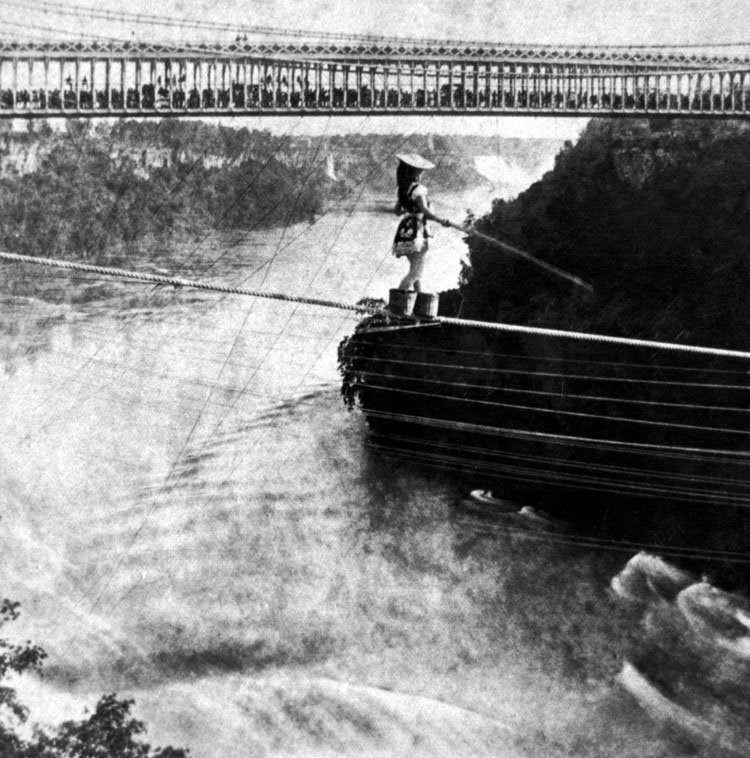 Wikimedia CommonsMaria Spelterini walks across the falls with peach baskets on her feet in 1876.

It’s uncertain whether Jones was trying to cement his spot on this list of daredevils — or join the thousands who have leapt with no intention of surviving (am estimated 20 to 40 people commit suicide there every year).

The giant deflated ball would suggest the former. Either way, he’ll always have a spot in the twisted history of people chasing waterfalls.

Next, read about the woman who hung by her teeth out of a helicopter above Niagara Falls.