The President’s “Nuclear Button” Isn’t Actually A Button, But A Briefcase Called The Nuclear Football

The supposed "nuclear button" isn't a button at all. Instead it's a "nuclear football" that comes in the form of a heavy briefcase. 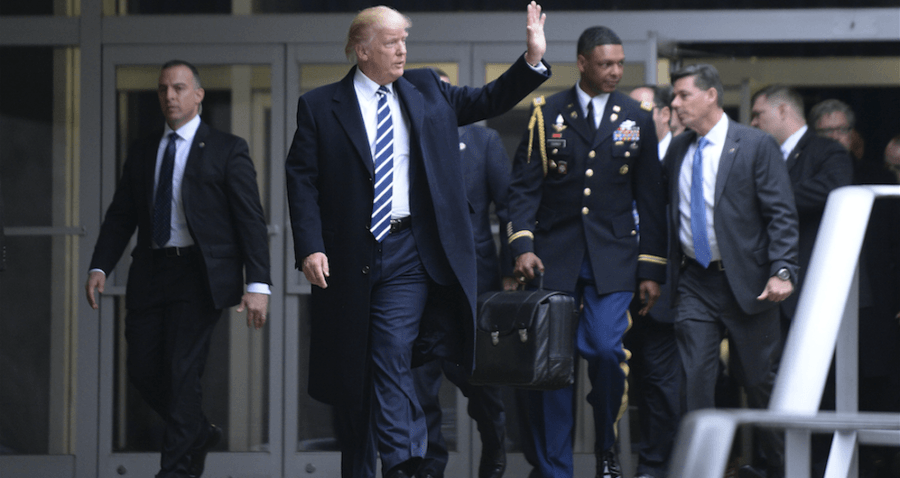 When North Korean dictator Kim Jong-un said in his annual address that “a nuclear button is always on my desk” and that the U.S. was within range, it was only a matter of time before President Trump responded to “Rocket Man” in kind.

And did he ever.

North Korean Leader Kim Jong Un just stated that the “Nuclear Button is on his desk at all times.” Will someone from his depleted and food starved regime please inform him that I too have a Nuclear Button, but it is a much bigger & more powerful one than his, and my Button works!

We’ll leave it to the punditocracy to discuss the implications of two world leaders with nuclear weapons publicly questioning each other’s manhood. For us, the big question is whether there’s a “nuclear button” at all.

It turns out the “nuclear button” is actually a nuclear football.

Well, not literally a football. But a briefcase.

The nuclear football is a 45-pound briefcase that travels with the president when he is away from a command center. It contains a book of retaliatory options, a list of classified site locations, protocols for the Emergency Broadcast System, and a list of authentication codes.

To authorize a nuclear attack, the president is must verify his identity by providing a code he has on him at all times. The code is typically described as a card that’s referred to as “the biscuit.” Once the president confirms he is in fact the president, he may authorize launches at will without the approval of Congress, the military, or anyone.

While the biscuit is supposed to be on the president’s person all the time, sometimes it doesn’t work out that way. According to the former chairman of the Joints Chiefs of Staff, President Clinton once lost his code and went months before telling anyone.

After President Reagan was shot in 1981, the code became momentarily lost when emergency room staffers cut his clothes off before surgery. It was eventually found in his shoe on the ER floor.

The current incarnation of the nuclear football dates to President Kennedy, who once remarked, “It is insane that two men, sitting on opposite sides of the world, should be able to decide to bring an end to civilization.

The term “nuclear button” seems to derive from “finger on the button,” which according to the late New York Times columnist and lexicographer William Safire, refers to panic-buttons in World War II bombers. The pilot was supposed to press the button to alert the plane’s crew that the craft had been irreparably damaged, but occasionally the buttons were pressed unnecessarily by panicked pilots.

Later, the phrase would be used in political contexts – notably by President Lyndon Johnson who told his 1964 Republican challenger Barry Goldwater that he must “do anything that is honorable to avoid pulling that trigger, mashing that button that will blow up the world.”

Johnson’s admonition was dramatically encapsulated in his famous campaign “Daisy ad” against Goldwater. That spot depicted a nuclear explosion obliterating a pastoral landscape in which a little girl was picking a daisy.

It is unclear what procedures North Korea has in place for a nuclear launch of its own. If in fact there is an actual nuclear button on Kim Jong-un’s desk, this is incredibly reckless. On the other hand, the nature of the country’s nuclear arsenal makes an instantaneous strike impossible. Although there is much uncertainty surrounding the program, it’s believed that North Korea’s long-range missiles are powered by liquid rocket fuel and therefore must be loaded with fuel directly prior to launch. And that can take hours.

As for the United States, it possesses some 900 fire-ready nuclear weapons – a fact which should continue to deter North Korea and other actors who might think twice or thrice before acting impulsively.

Next, watch an underground nuclear explosion melt the earth. Then see 35 haunting photos of a town frozen in time by a nuclear meltdown.