Soldiers from the 126th Territorial Defense discovered the Greek jars, which date to the earliest days of the city's history 2,500 years ago and once likely held wine or grains. 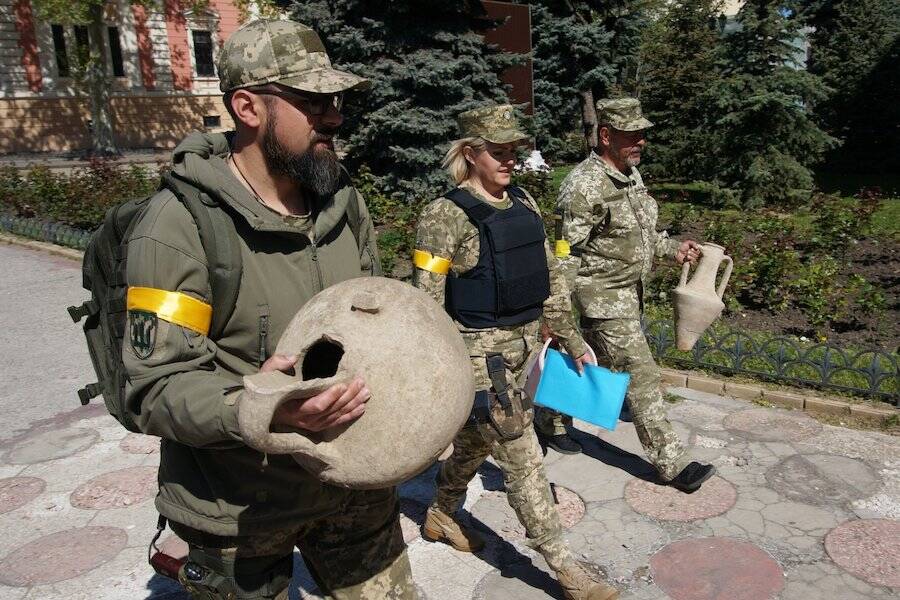 126th Territorial DefenseThe ancient amphorae were unearthed from the port city of Odesa.

As Russia’s invasion of Ukraine has decimated cities and turned millions of people into refugees, Ukrainian defense forces in the city of Odesa have been busy building trenches for a future attack. And they just made a stunning find in the process — a trove of ancient Greek urns buried just under the surface.

According to Smithsonian Magazine, soldiers of the 126th Territorial Defense unearthed these amphorae earlier this month. The unexpected find of elongated bottle-neck jars was accompanied by several ceramic shards. The surprised brigade publicized the discovery in a Facebook post on May 12.

While the discovery of intact jars in impeccable condition was fascinating on its own, their origins revealed an even more staggering history. The amphorae have been dated to the fourth or fifth century B.C.E., about 100 years after the first Greek settlement was constructed in the area that would eventually become Odesa.

Astonishingly, the jars survived millennia of warfare and invasions — only to emerge in the midst of a modern conflict. 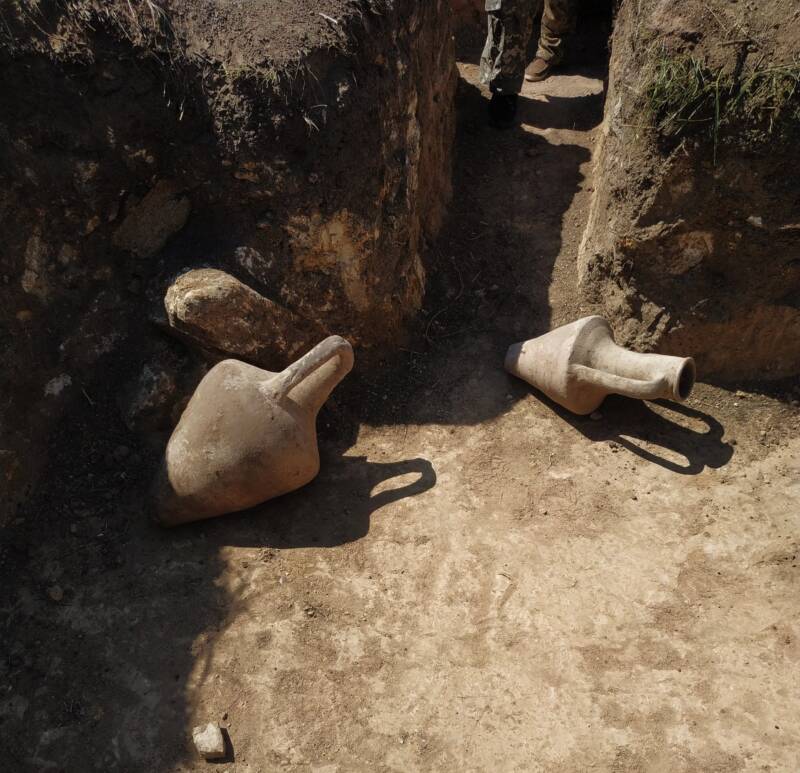 126th Territorial DefenseThe urns were dated to the fourth or fifth century B.C.

According to Artnet, the 126th brigade safely transported the artifacts to the Odesa Archaeological Museum. Not even the imperative construction of military fortifications against Russian soldiers impeded Ukrainians from safeguarding these relics. For local onlookers, that distinction spoke volumes.

“Ukrainian soldiers dug trenches and found ancient amphorae,” said journalist Yana Suporovska, according to Heritage Daily. “They have already been transferred to the museum. We are not Russians; we preserve our history.”

As the third-most populated city in Ukraine, Odesa is an invaluable territory for the embattled nation. Found on the southwestern coast with direct access to the Black Sea, the city has been an essential transportation hub for international shipping for centuries. Amphorae themselves, meanwhile, have an equally rich history.

They first emerged during the Bronze Age more than 3,000 years ago, according to Smithsonian. They rapidly became the newfound standard for storing goods and convenient transportation. They were built in a variety of shapes and sizes, with long and slender urns for wine, broader ones for cereals and fish, and tiny urns for perfume. 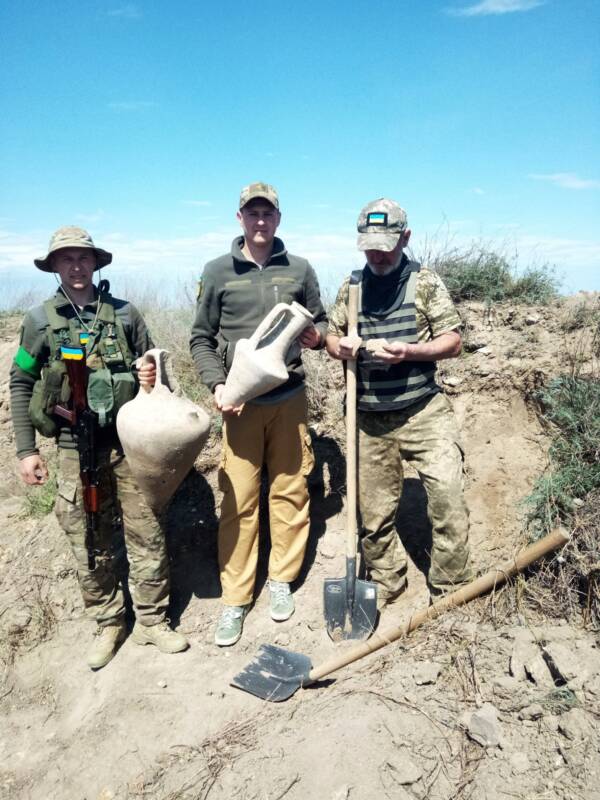 Amphorae like the ones found in Odesa can even be traced back to the origins of the modern Olympics. Winners of the festival’s predecessor, the Panathenaic Games, would receive amphorae full of olives.

Romans and Greeks weren’t the only ones to use amphorae, however. Even the Byzantines and Ancient Egyptians utilized ceramic urns like these and often even crafted them with aesthetic beauty in mind. According to Heritage Daily, the two Odesan urns found last week were nearly lost to the current conflict.

While military reserve troops of the Territorial Defense deployed by the Operational Command South were able to retrieve and safeguard the amphorae, archaeologists are currently incapable of studying the site of discovery itself due to the raging warfare nearby. Ultimately, hundreds of other sites have already been lost.

UNESCO recently estimated that at least 133 cultural sites in Ukraine have been damaged since Russia’s invasion began on Feb. 24. Unfortunately, Ukrainian President Volodymyr Zelensky fears that number is even higher — and has exceeded 200, according to Artnet. The specific sites in question were invaluable, to say the least. 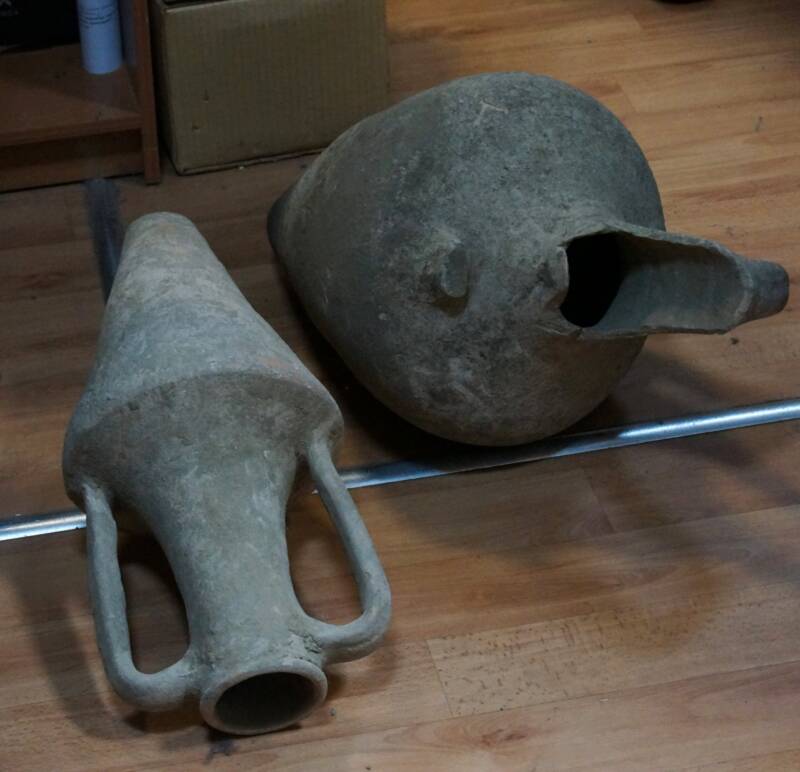 The former home of Ukrainian poet and philosopher Hryhorii Skovoroda, for instance, was shelled on May 7. The 18th-century residence outside Kharkiv had been turned into a museum, only to be partially destroyed. The Kuindzhi Art Museum in Mariupol and another honoring folk artist Maria Prymachenko were also lost.

Most brazen of all was the alleged Russian plundering of 2,300-year-old Scythian gold artifacts. President Vladimir Putin’s troops were said to have looted the ancient relics from a history museum in Melitopol, according to The New York Times.

What ultimately remains most important above all else is the safety of innocent civilians on both sides of the Russia-Ukraine conflict. A close second is arguably that the human history currently in jeopardy is protected by those who safely can.

In a statement, UNESCO Director-General Audrey Azoulay said that cultural heritage “must be safeguarded as a testimony of the past, but also as a catalyst for peace and cohesion for the future, which the international community has a duty to protect and preserve.”

After reading about the ancient urns found in Ukraine, learn about the Roman soldier’s face mask unearthed in Hadrianopolis. Then, read about the 119 skulls discovered in Mexico City’s Templo Mayor.