Girl Scouts Lori Farmer, Michelle Guse, and Doris Milner were between the ages of 8 and 10 when they were brutally raped and murdered at Oklahoma’s Camp Scott on June 13, 1977.

Summer camp has been a staple of the American experience for generations. In 1977, however, summer camp took on a new and horrible connotation for many thanks to one shocking triple-homicide right out of a horror movie: the Oklahoma Girl Scout Murders at Camp Scott.

Lori Farmer, Michelle Guse, and Doris Milner, all between 8 and 10, were raped, bludgeoned, and strangled to death. Their bodies were found shortly before dawn on Monday, June 13, by a counselor shuffling toward the showers at around 6 a.m. Spotting three sleeping bags oddly strewn about 150 feet into the woods, she approached.

It was horribly clear almost immediately that 10-year-old Doris was dead. Seeing her corpse atop her sleeping bag led the counselor to run for help, believing an accident had occurred. Only with the camp director and nurse in tow did the full truth emerge — as the other bags were unzipped to yield more bodies.

Tragically, it had only been a day since Camp Scott opened its doors for the summer. A shy newcomer and one of the only Black girls at the camp, she had tearfully waved her parents goodbye but made fast friends with tent mates Lori Farmer and Michele Guse. Braving their first night and storm together, they were dead by dawn.

Authorities were as confounded as the parents. And what’s worse, the murders remain unsolved to this day. This is the chilling story of the Oklahoma Girl Scout Murders. 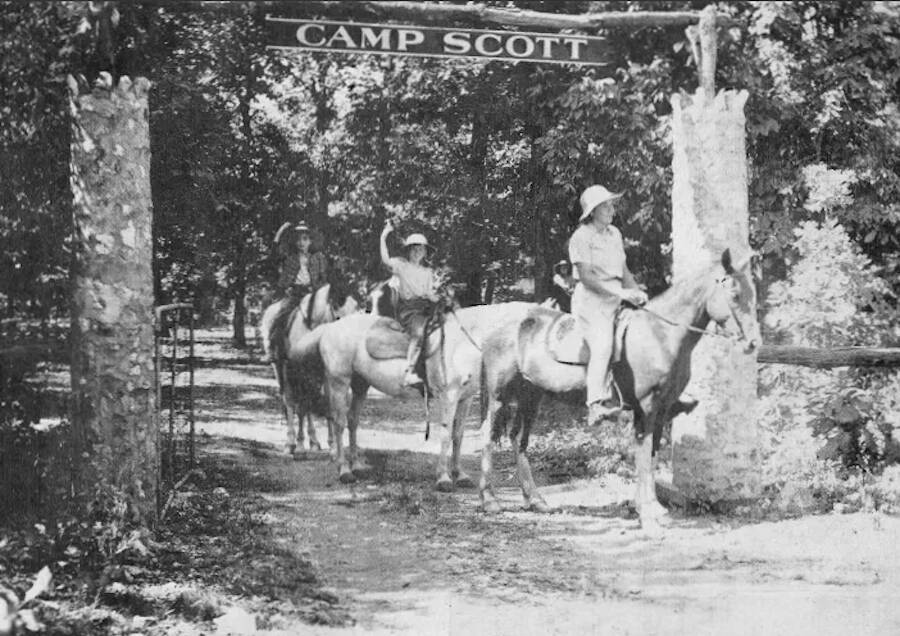 With a population of 30,000 and vast forestland in all directions, Mayes County was a perfect place to run a camp. Operated by the Girl Scouts since 1928, Camp Scott was two miles from the town of Locust Grove and 50 miles from Tulsa’s Girl Scout headquarters. Counselors met their campers at the latter on June 12.

Michelle Hoffman had aged out as a camper by 1977 and would spend her seventh summer at Camp Scott as a counselor. The 15-year-old recalled how scary her own first summer was when she spotted shy Doris Milner in the crowd. Wading through parents and 130 children, she ensured the girl’s mother not to worry.

“My first year at Camp Scott I remember going ‘Whoa!’ — because it is so dark, dark, dark in those woods at night,” said counselor Michelle Hoffman. “If you’ve never been camping in a platform tent in the deep woods, it’s a little intimidating. After your first time there, you get it. You’re just prepared. It’s going to be dark.”

After about an hour’s drive, the bus turned off Highway 82 and onto Cookie Trail Road. While familiar campers jumped out to find their tents, Hoffman made sure to bring Doris to Kiowa Tent No. 8, herself. It was close to both the bathrooms and the kitchen, with Milner immediately finding camaraderie inside.

A few songs and innocent laughs later, Milner had found best friends in 8-year-old Lori and 9-year-old Michelle. Even counselor Carla Wilhite said that while they were “three of the quietest kids” individually, the tent was “just as loud and lively” as others before nightfall. Braving a storm in their tent, the trio went to bed. 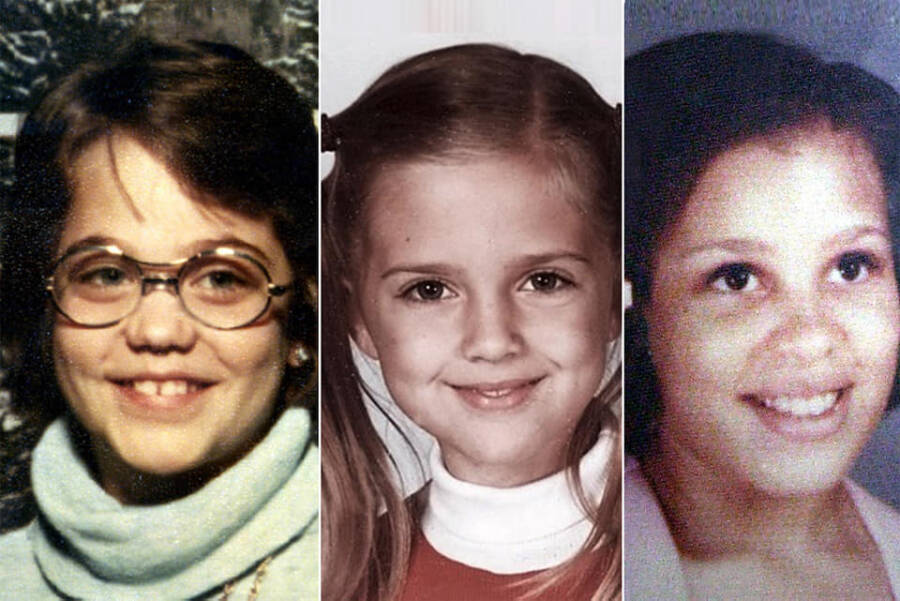 While news reports at 8 a.m. varied from freak accident to foul play, authorities at the scene were already aware of the macabre truth. It was Carla Wilhite herself who found the bodies, with the subsequent crime scene revealing its vicious nature to police. Farmer and Guse were beaten to death, and Milner strangled.

Two of the girls had been raped and the other sodomized. It remains unclear who suffered which, while it was glaring that one had been treated differently from the others — and not stuffed into a sleeping bag. In the meantime, buses brought all other campers back to Tulsa where parents breathed sighs of relief at 2:15 p.m.

Police interviews revealed that there had been eerie noises in the night. A counselor had gone to investigate moaning sounds at around 1:30 a.m., but couldn’t locate the source. A camper in Tent No. 7 was woken half an hour later with a flashlight shone in their face. One girl heard a scream at 3 a.m., while another heard someone crying, “Momma, Momma.”

A nearby landowner had heard “quite a bit of traffic” on a road near Camp Scott between 2 and 3 a.m. The crime scene itself was covered in blood, seemingly wiped around with a mattress and towels. Footprints inside and outside the tent were found but differed in size. Duct tape, cords, and flashlight were left behind.

While authorities found a print on the lens, they failed to identify it. Most disturbing was the notion that these murders had been planned for months, as a counselor’s ransacked cabin in April yielded a note that read: “We are on a mission to kill three girls in tent one.” Signed “The Killer,” the camp director treated it as a joke.

While Sheriff Glen Weaver claimed to have found the murder weapon on June 16, District Attorney Sid Wise almost immediately denied as much. Ultimately, police dogs located a cave two miles from camp that held a flashlight battery, glasses seemingly stolen from camp, and photos of women that they were able to link to a man named Gene Leroy Hart.

Gene Leroy Hart Is Tried And Acquitted Of The Murders 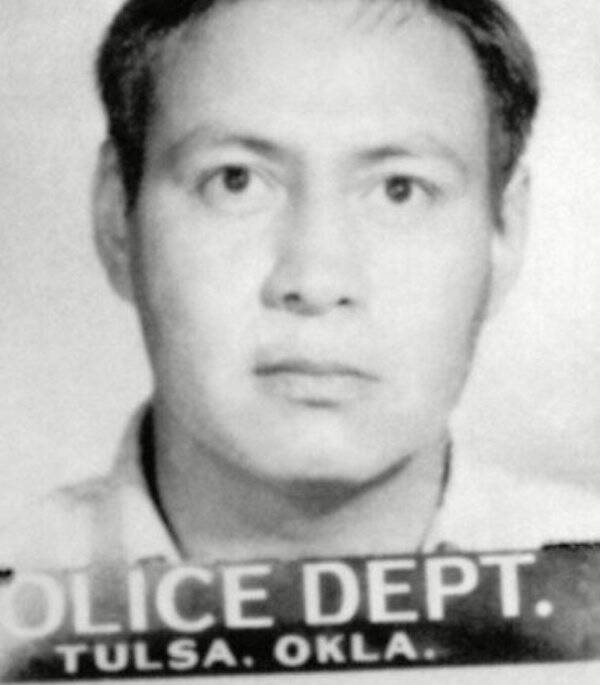 Tulsa Police DepartmentGene Hart was acquitted of the murders on March 30, 1979.

Convicted of rape and kidnapping, Gene Leroy Hart had escaped Mayes County Jail in 1973. Police believed the local Cherokee community had been sheltering him ever since. With the help of 40 FBI agents and $1,250,000 later, police tracked him down at a Cherokee cabin on April 6, 1978.

It had been the largest and longest manhunt in Oklahoma history.

While Hart had indeed been hiding among fellow Cherokees, members of the American Indian Movement argued Sheriff Weaver had been trying to find a scapegoat among their tribe to pin the murders on. Nonetheless, Hart was transported to Oklahoma State Penitentiary and charged with three first-degree murders.

The trial from March 19 to May 30, 1979, saw the prosecution argue Hart’s eyeglasses were stolen from the camp and that hair found on the duct tape resembled his. The defense, meanwhile, claimed the glasses had been taken from Hart’s previous rape victims — which Hart admitted — and that Weaver planted the rest.

With waitress Dean Boyd testifying that she’d seen a nervous man at her diner 15 miles from Camp Scott on the morning of the killings, an alternative suspect emerged. Identified as William Stevens, the man was a convicted rapist — who an 11-year-old camper had even seen on Camp Scott grounds days before June 13.

Stevens’ friend Duane Peters not only claimed that he had loaned him the flashlight found at the scene but that Stevens admitted the killings to him in October 1977. Ultimately, however, a jury of six men and six women deliberated for five minutes before finding Gene Leroy Hart innocent on March 30, 1979. He died of a heart attack on June 4, 1979.

It was only in 1989 that DNA testing of semen samples found at the scene showed that three of the five probes matched Hart’s DNA. The Farmer and Milner families unsuccessfully sued the Magic Empire Girl Scout Council in 1985, while Farmer opened a Parents of Murdered Children chapter in Oklahoma.

In the end, Camp Scott shuttered its gates and never welcomed anyone again. Now part of the pantheon of unsolved murders, the horrid crimes at Camp Scott remain poured over by amateur sleuths hoping to find the truth.

After learning about the Oklahoma Girl Scout Murders, read about the unsolved mystery of the Redhead Murders. Then, learn about 11 famous murders too chilling to forget.