Only In Australia: 13 Surreal Photos Of An Olive Python Swallowing A Crocodile Whole

One passerby was brave enough to photograph the whole scene from mere feet away. 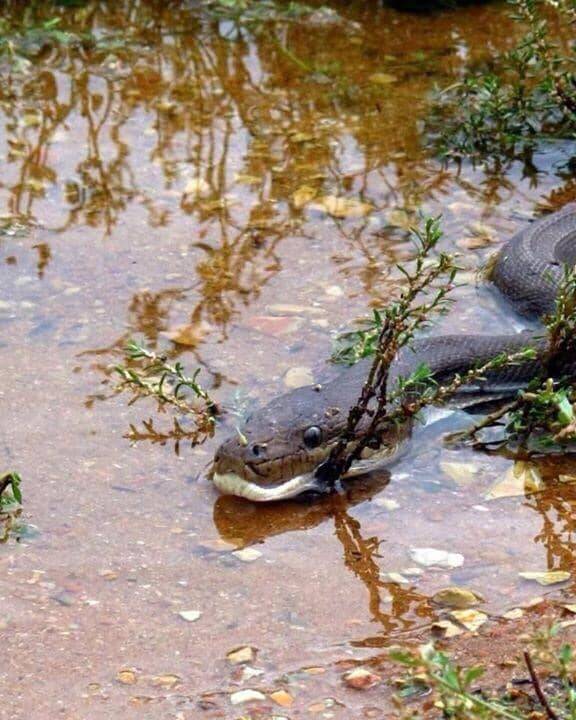 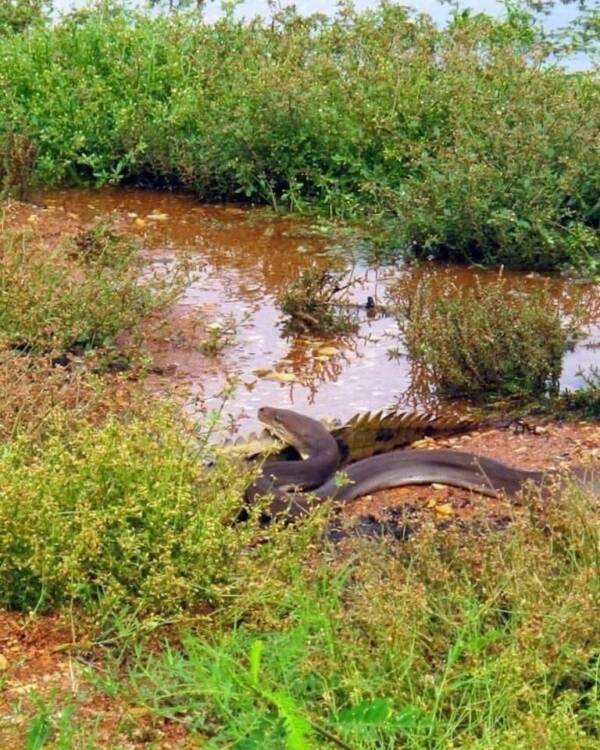 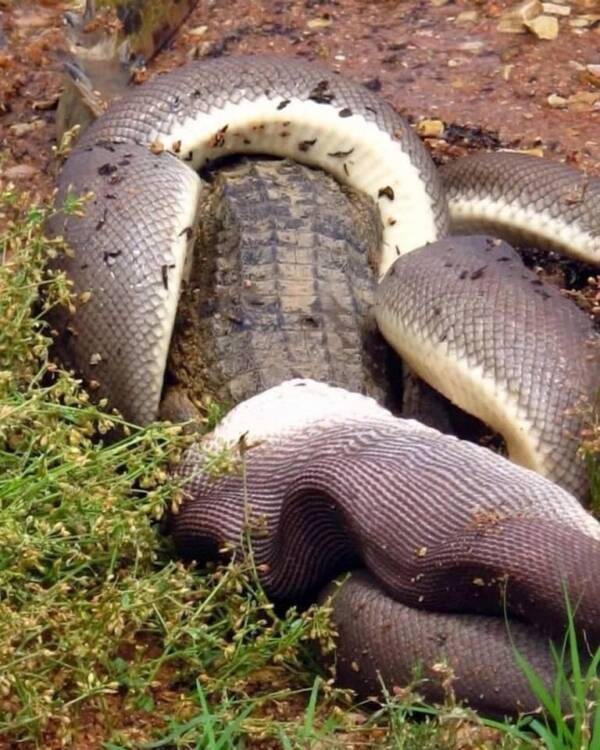 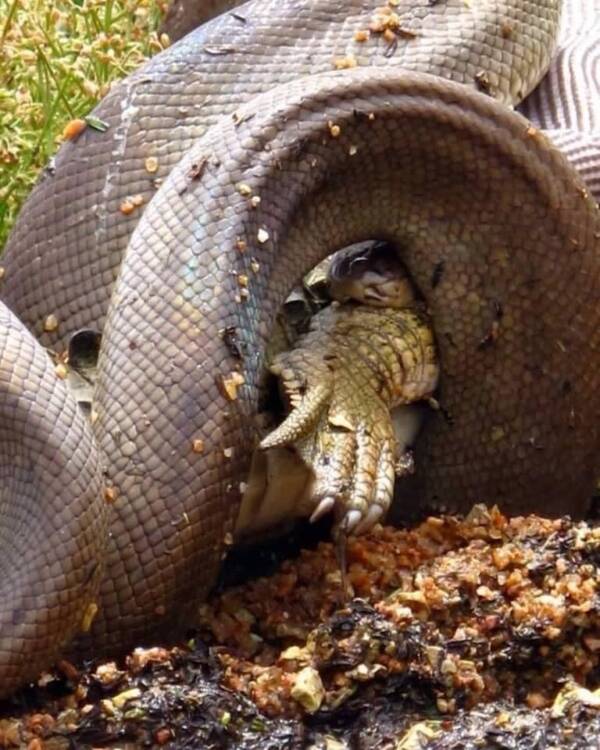 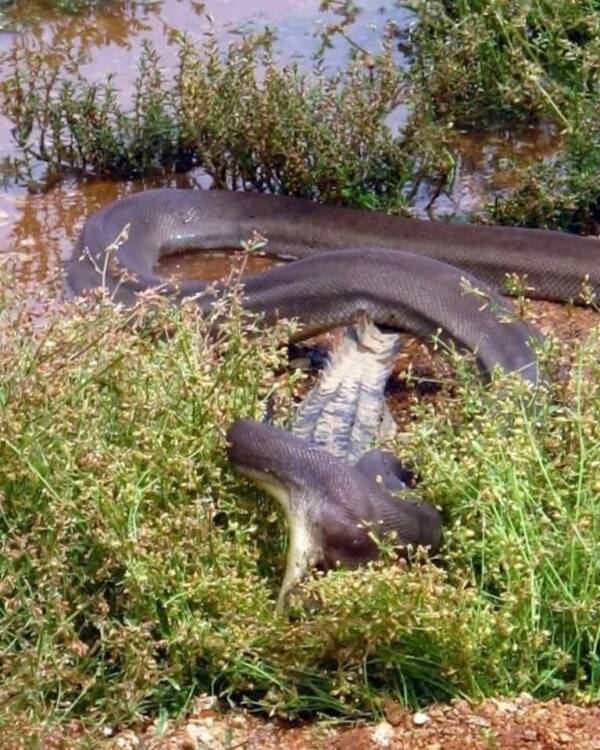 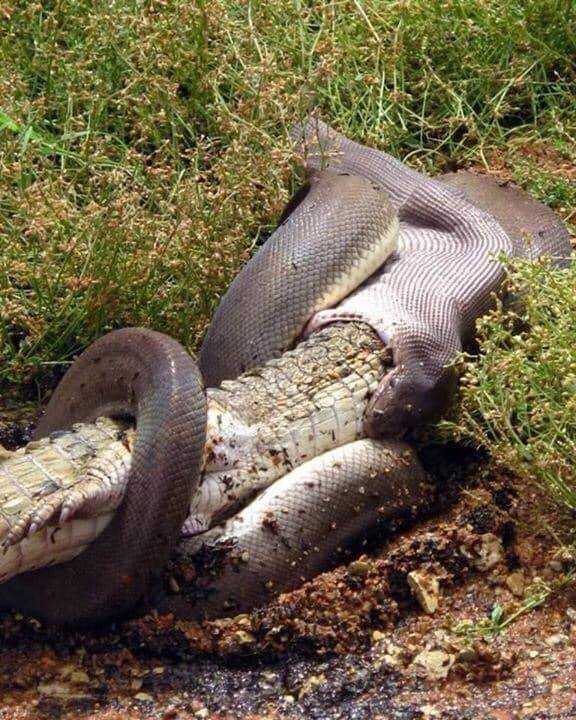 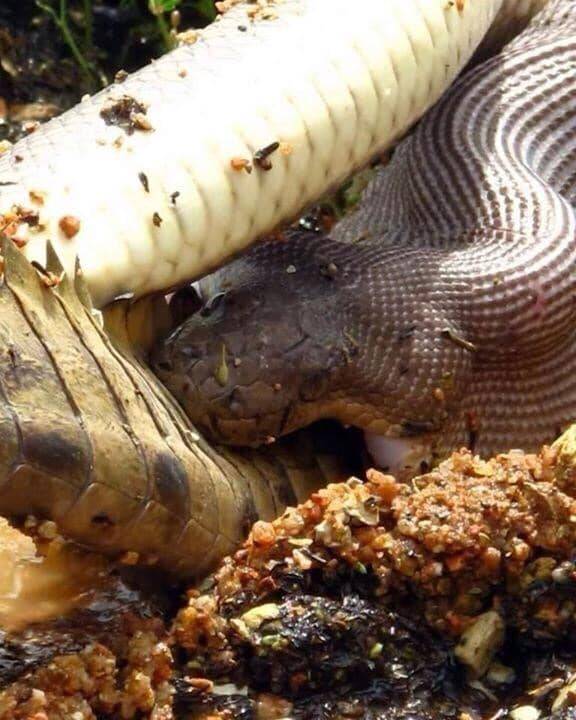 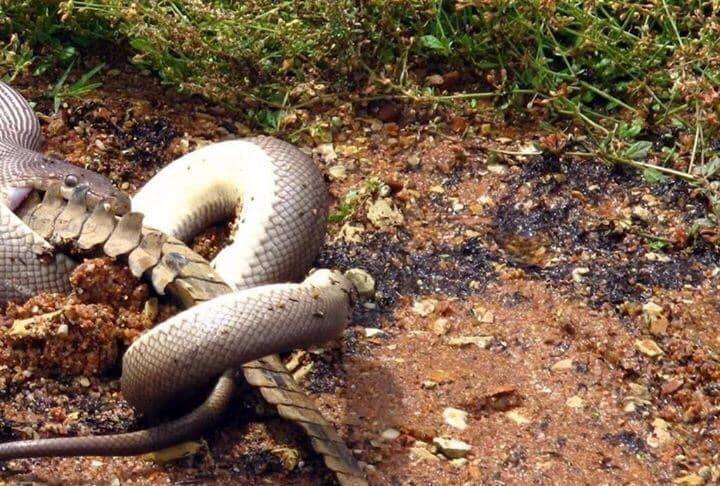 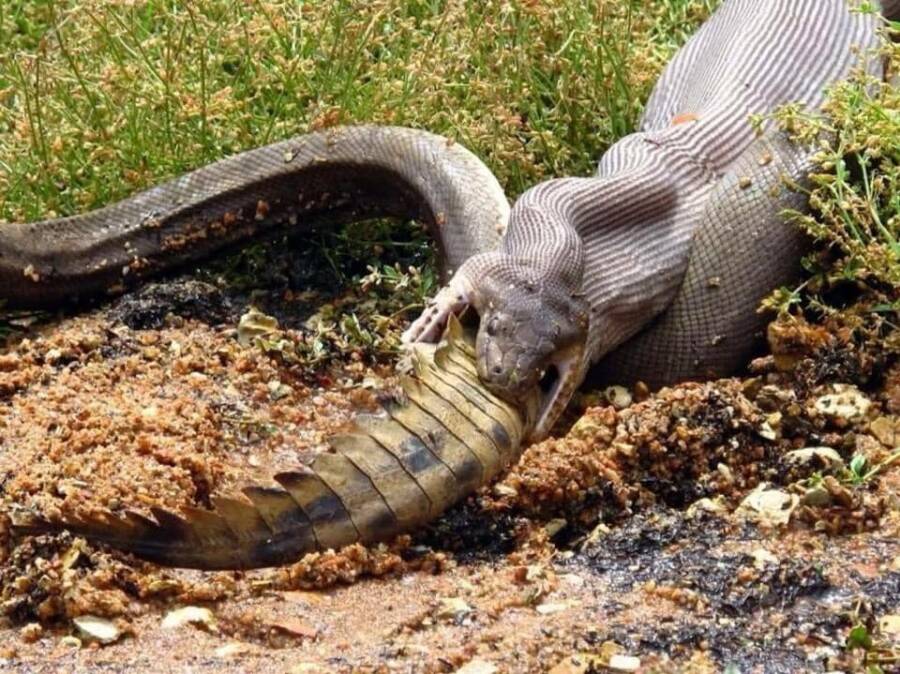 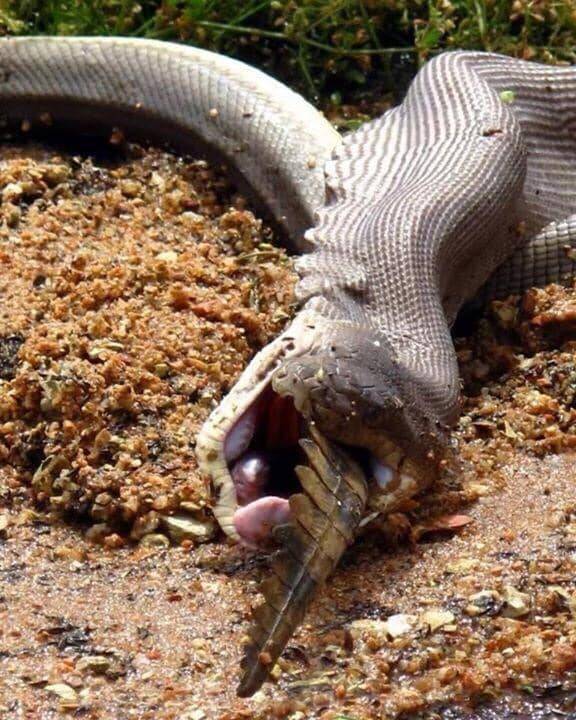 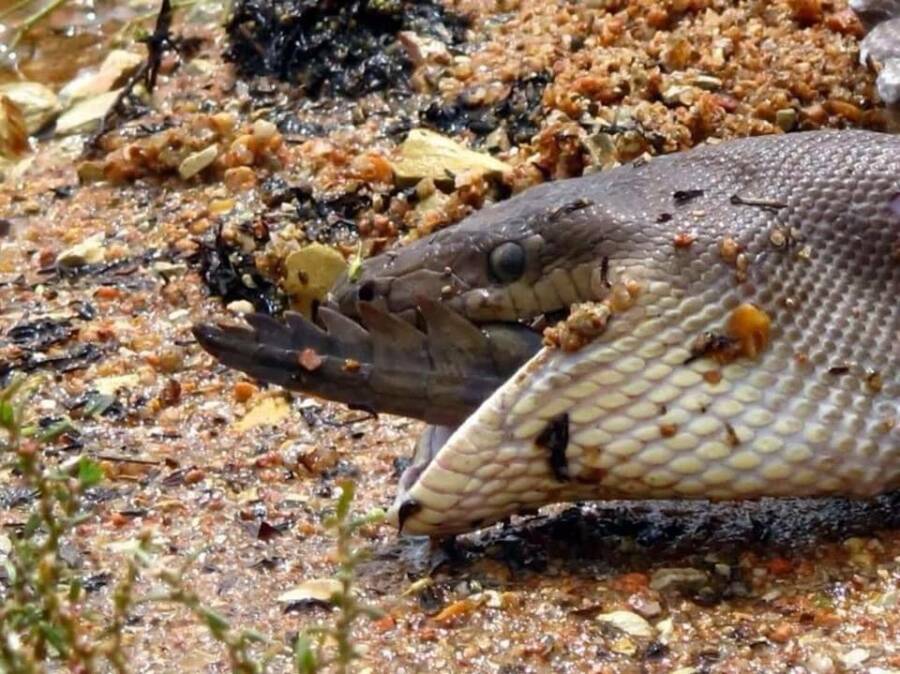 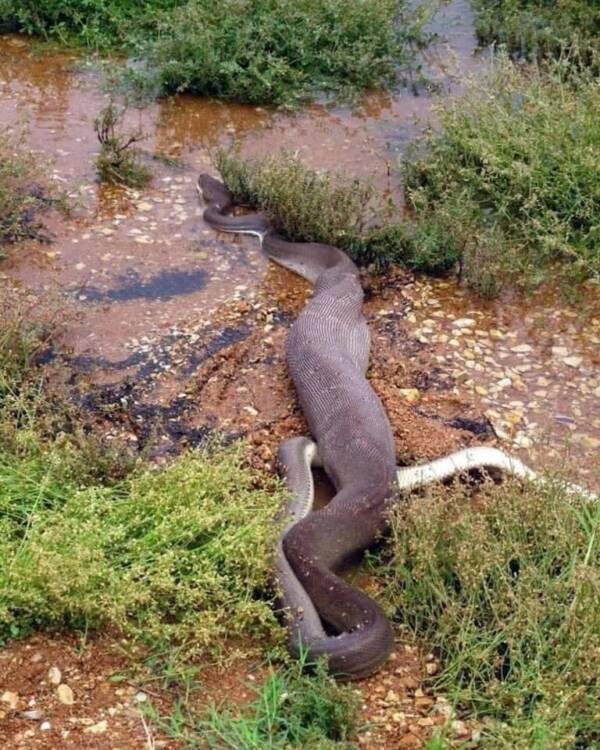 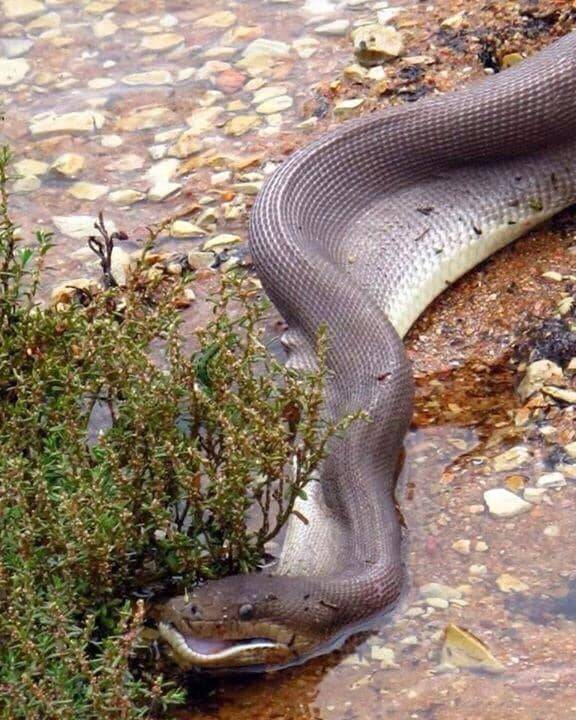 Only In Australia: 13 Surreal Photos Of An Olive Python Swallowing A Crocodile Whole
View Gallery

Even in Australia — the de facto home of terrifying animal footage and wildlife encounters — it's not every day that you see a snake swallow a croc whole. Yet one intrepid photographer recently captured a series of images showing an enormous olive python (Liasis olivaceus) devouring a full-size Johnstone crocodile.

According to the GG Wildlife Rescue organization, unsuspecting hobby kayaker Martin Muller recently stumbled upon this violent scene during a routine exercise session around the swamps of Mount Isa in Queensland. Braver than most, he stuck around long enough to capture the entire, grisly scene.

Australia’s Department of the Environment and Energy (DEE) explained that the olive python is one of Australia’s largest species of snake. They can grow up to 13 feet in length, though the average size tends to be around eight feet, with the females tending to be slightly longer than their male counterparts. As for the Johnstone crocodile, it can reach nearly 10 feet in length.

Fortunately for animal advocates and conservationists, the olive python is under no current threat of endangerment or extinction. The species is generally considered stable and is routinely observed in sizable numbers at known sites frequented by these reptiles.

These sites all tend to have a few things in common, namely their proximity to water: Olive pythons relish water holes, gorges, and swamps.

Of course, that doesn’t stop them from hanging out in usual places from time to time. The DEE noted a 2007 encounter when someone spotted a rogue python slithering around a vehicle track on an iron ore shipping facility.

Mainly, however, these animals prefer aquatic and rocky environments, where they can capture some of their larger prey — like the Johnstone crocodile being devoured above. 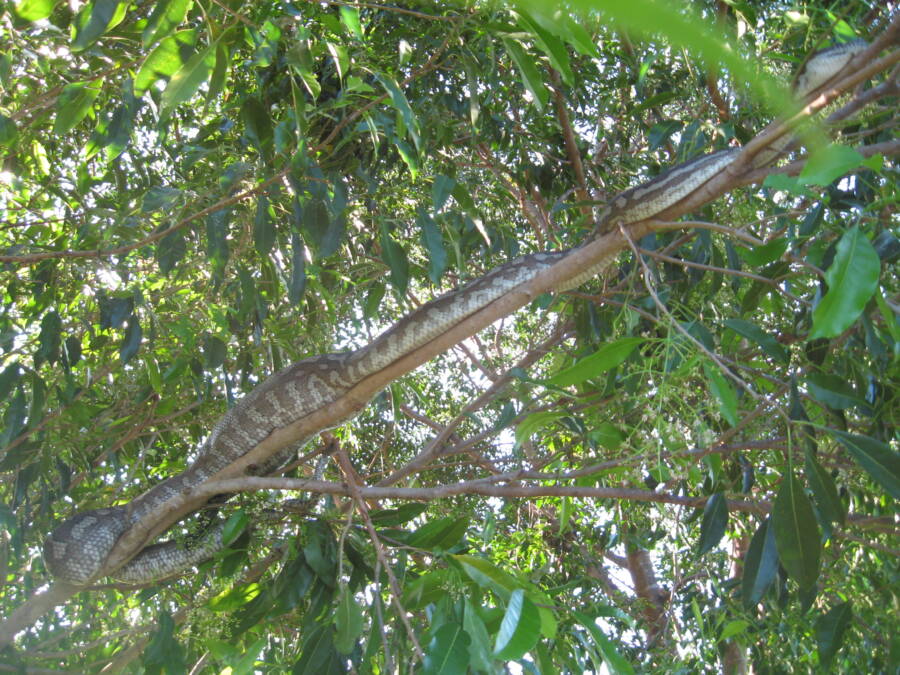 Wikimedia CommonsAn olive python (Liasis olivaceous) scaling a tree at the Rowes Bay Golf Club in 2010. This species can grow up to 13 feet.

Breeding season for these cold-blooded animals lasts from June to August, with males slithering as far as two miles to find female partners, who emit attracting pheromones during this time. It’s quite common for a pair of snakes to find secluded shelter, such as a cave, and stick close for as long as three weeks.

In October, the eggs are laid. It takes around three months for these to hatch before the pythons resume their regular routine and continue hunting for food. In that regard, this species is fairly impressive as olive pythons are great swimmers and use their submerged advantage to ambush larger prey: rock wallabies, euros, fruit bats, ducks, corellas, pigeons, and coucals.

For the crocodile above, the python had to use its two lower jaws to properly fit this sizable animal into its mouth.

According to IFL Science, olive pythons don’t actually detach their jaws during this process. Rather, they have two lower jaws that move independently of one another, which allows the animal to gorge itself when necessary.

Once the crocodile is trapped in the python’s jaws, the snake starts doing the "pterygoid walk." This process essentially has the python move its head over and around its prey, as to facilitate the swallowing process with some helpful pressure. 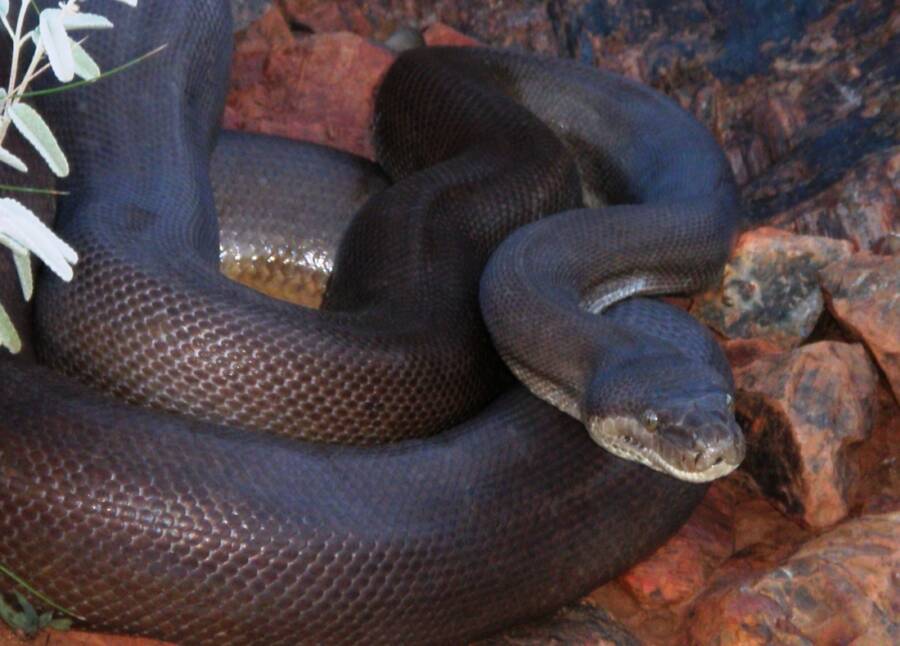 SciTech Non-Profit/Australian GovernmentMale olive pythons will travel up to two miles during mating season to find a partner.

In the end, digesting such an enormous meal is the biggest hurdle — besides overcoming the obvious risk of death during the initial encounter, of course. For a crocodile as big as the one photographed by Muller, the python will likely be out of commission for as much as a few weeks while it digests.

While all the bones, flesh, and organs will eventually be successfully digested, this python will inevitably poop the crocodile’s scales and teeth out whole, due to the keratin and enamel they contain.

Fortunately for Muller, this olive python seemed to have found its lunch mere seconds before it found him. For the rest of us, meanwhile, we get to marvel at this thrilling scene of nature from the safe distance of a screen.

Next, check out a giant python eating a man alive while locals capture the remains on camera as well as a a 54-year-old Indonesian woman who was found dead after being swallowed by a 23-foot python on the island of Sulawesi. Then, read up on the gigantic prehistoric snake known as the Titanoboa.