Meet Titanoboa, The Prehistoric Snake Of Your Nightmares

A terrifyingly large snake that once lived in modern-day Colombia, Titanoboa measured up to 50 feet long and weighed up to 2,500 pounds.

Deep in a South American jungle, a huge snake once stalked its prey. After slinking closer and closer to an unsuspecting animal, the silent hunter would strike in a flash and snap its victim’s neck in one swift move. The prey didn’t even hear the Titanoboa snake coming amid the cacophony of the prehistoric jungle 60 million years ago.

No animal had a chance against the biggest snake in history. 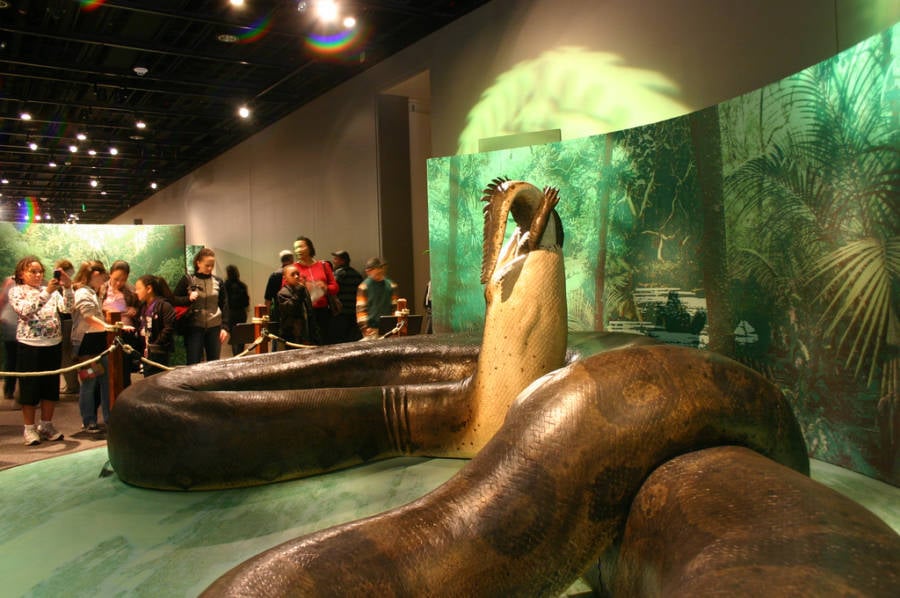 Ryan Sommma/FlickrA Titanoboa on display. See the humans in the background for a comparison in size.

Titanoboa, the enormous serpent of legend, thrived in the tropical jungles of South America some five million years after the extinction of the dinosaurs. The death of the giant reptiles left a vacuum at the top of the food chain, and Titanoboa gladly stepped up.

This prehistoric species grew up to 50 feet in length and weighed as much as 2,500 pounds. That’s as long as a semitrailer you see on highways and about twice as heavy as a polar bear. At its thickest point, Titanoboa was three feet wide, which is longer than a human arm.

In the hot, humid jungle, Titanoboa fit right in: its brown skin camouflaged it perfectly as it slunk through muddy waters.

Some scientists think it killed by constricting and asphyxiating its prey, while others argue that though it looked like a boa constrictor (the resemblance that gave it its name), it behaved like an anaconda, lurking in the shallows and ambushing unsuspecting animals with a stunning blow. 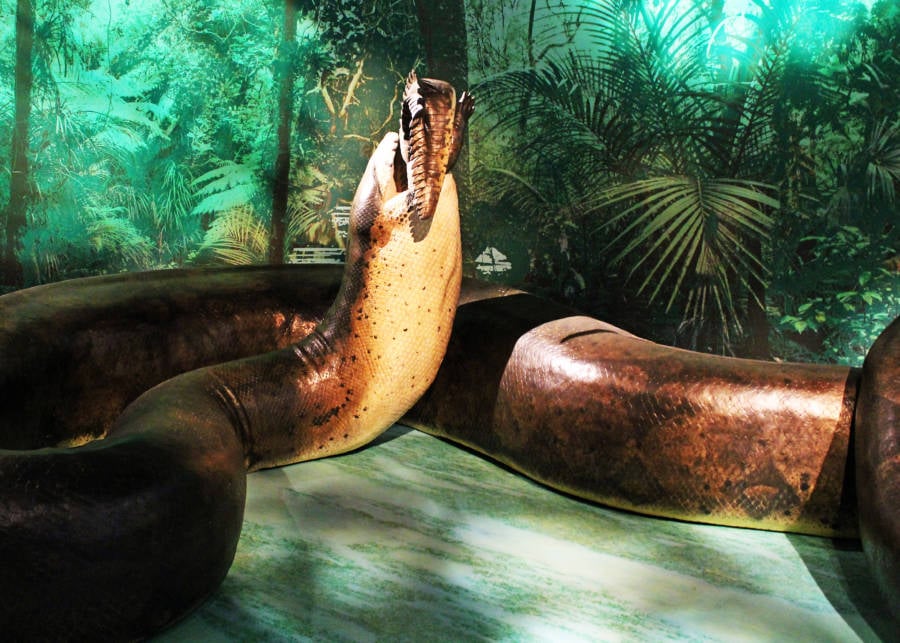 Wikimedia CommonsImagine that alligator tail is your arm.

What happened next scientists agree on: the great snake swallowed its giant prey whole — and if you had the terrifying experience of staring into Titanoboa’s mouth, you would be no exception.

It could kill you before you even had a chance to scream.

Titanoboa is a shockingly recent discovery. The story of its reappearance began in 2002 when a student uncovered a fossilized leaf on a visit to the massive coal mine at Cerrejón in Colombia.

The discovery was an intriguing one: it suggested that once upon a time, the area had been home to a sprawling jungle. Further study revealed that the fossil belonged to the Paleocene era — which meant the mine might once have been the site of one of the world’s first rainforests.

More digging uncovered remarkable specimens: giant turtles and crocodiles, and some of the first bananas, avocados, and bean plants that ever sprouted on planet earth.

They also uncovered a massive vertebra — a vertebra far too large to belong to any jungle serpent on record. It was an incredible find, and researchers immediately began combing the mines for more fragments of the jungle titan.

Their working theory was that the massive snake to which the vertebra belonged had been caught in a mudslide that buried it. Millions of years and dozens of feet of rock later, the bone became part of rich coal fields — which meant there might be others nearby.

Their excitement was palpable:

The paleontologists who discovered Titanoboa describe their shock.

The Hunt For A Titanoboa’s Skull

One particular find, however, was unlikely. Though they might uncover more vertebrae, it would take a skull to show them what the enormous serpent was really capable of — and fossilized snake skulls are notoriously difficult to find.

The problem is that snake jaws are made powerful by their muscles, not their bones — their skulls are actually remarkably fragile and usually crumble before sediment can build over them. As a result, they don’t usually make it into the fossil record.

But remarkably, over the next few years, the team uncovered the remains of 28 enormous serpents and not one but three skull fragments, allowing them to piece together a full-scale replica of a snake so large and so frightening that it left no doubt about its place in the new jungles of the world.

What if Titanoboa still lived?

Even among the massive creatures of the ancient rainforest, Titanoboa was king: it was the apex predator of its era, a creature as unquestionably the ruler of its environment as the Tyrannosaurus Rex was in its own time.

Its astonishing dominance has led some to wonder — what would have happened if Titanoboa hadn’t gone extinct?

Titanoboa Changes Our Understanding Of The Prehistoric Landscape

To demonstrate just how big Titanoboa could get, the Smithsonian set up an exhibit in Grand Central Station in New York in 2012. The mockup featured a gargantuan snake swallowing what looked like a crocodile with its tail hanging out of the snake’s mouth.

They also ran a series of attention-grabbing promotional videos, like this look at a face-off between a T-Rex and Titanoboa:

The publicity campaign certainly got people’s attention. It was all part of the run-up to a Smithsonian Channel special on the spectacularly rare find, and it showed off just how large prehistoric creatures could get compared to today’s animals.

Titanoboa’s astonishing dimensions were the result of its hot climate. Plant fossils suggest that the temperature of its jungle habitat averaged a humid 90 degrees — and may well have been hotter.

Ectothermic animals rely on external heat sources for their energy. If it’s cold out, they’re sluggish. Only when it’s warm can they operate at their full potential. 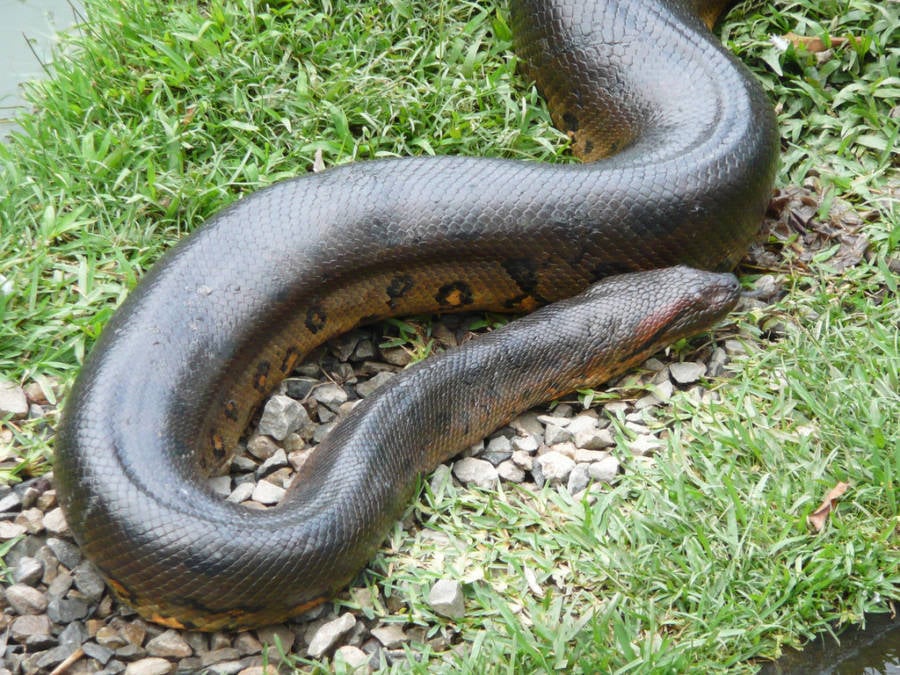 If it’s always hot, a cold-blooded creature’s metabolism will run at maximum efficiency — allowing them to dedicate that extra energy to growing larger and sustaining a larger body.

Though scientists have debated the merits of the theory (if it’s true, some argue, why aren’t the lizards of our hottest jungles today similarly massive?), there’s no denying that Titanoboa was enormous.

History’s largest snake simply has no equal among modern snakes.

Until Titanoboa’s discovery, the largest snake fossil ever found came in at 33 feet and weighed 1,000 pounds. That was Gigantophis, a snake that lived 20 million years ago in Africa.

The largest snake species today is the giant anaconda, which can grow to around 15 feet in length — less than one-third of the size of your average Titanoboa. Anacondas rarely reach more than 20 feet in length or weigh more than 500 pounds.

These contemporary giants, which are terrifying enough to see in the wild, pale in comparison to their long-dead ancestors.

After learning about Titanoboa, the largest snake ever found, see 10 terrifying prehistoric creatures that weren’t dinosaurs. Then check out these scary insects that will haunt your dreams.