Was Tiffany Valiante’s Grisly Death By Train A Suicide — Or Something Far More Sinister?

Ever since Tiffany Valiante of Mays Landing, New Jersey was gruesomely killed by an oncoming train in 2015, the full story behind her death has remained an unsolved mystery.

On a summer night in 2015, New Jersey Transit train 4693 struck and killed an 18-year-old named Tiffany Valiante near her home in Mays Landing. In the aftermath, her death was ruled a suicide. But her family insists that the recent high school graduate was actually murdered.

Though Tiffany Valiante had endured a tumultuous year, her parents contend that she was far from suicidal. They believe that New Jersey Transit claimed she stepped onto the tracks to avoid accusations of negligence, and insist that the authorities bungled their investigation into her death. 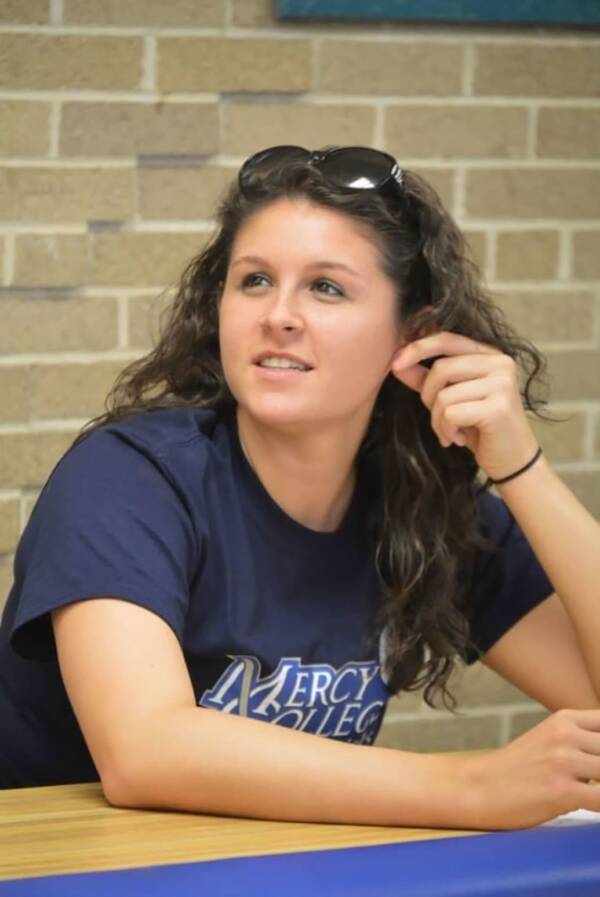 Valiante FamilyTiffany Valiante had plans to attend college when she appeared to die by suicide in 2015.

What’s more, unsettling rumors pervaded the girl’s town in the aftermath of her death. One local store manager even came forward to say that his teenage employees had been sharing stories about how Valiante had been abducted and forced onto the train tracks.

So what exactly happened to Tiffany Valiante? 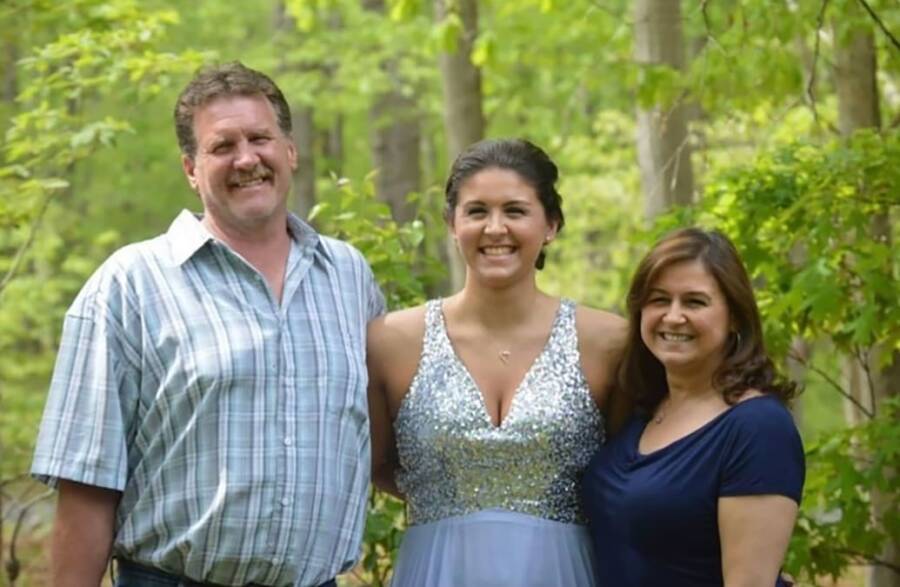 Valiante FamilyTiffany Valiante and her parents, Dianne and Steve, in an undated photo.

In the days, weeks, and months leading up to Tiffany Valiante’s death on July 12, 2015, the 18-year-old had a number of personal struggles. As the Daily Beast reports, she and her mother, Dianne, had clashed to the point that child protective services visited their home three times in 2014.

Then, Dianne admitted to punching her in the arm during an argument. They both agreed to attend a counseling session, during which Valiante told their therapist that she was neither depressed nor suicidal. The therapist ultimately found that she had a “stable” family relationship.

But if Tiffany Valiante’s family life was stable, her life outside the home was anything but. According to the Daily Beast, she responded to her grandfather’s death by smoking pot, stealing money, and skipping class. In early 2015, she came out as gay and started dating women. And Valiante expressed feelings of loneliness to her friends, who told investigators that she had self-harmed.

Still, Valiante seemed to have bright hopes for her future. She had won a volleyball scholarship and had plans to attend Mercy College in New York State. According to WHYY, she was mulling pursuing a career in criminal justice, or even joining the Air Force.

But before she could start her freshman year, Tiffany Valiante died in a horrifying fashion. 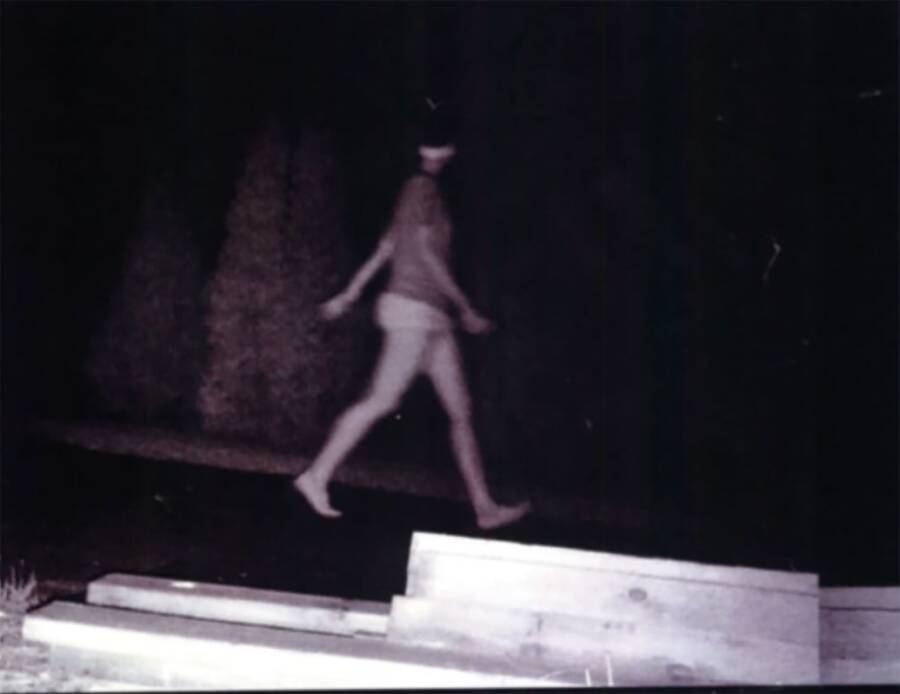 Valiante FamilyThis grainy still is the last known image of Tiffany Valiante, captured on a neighbor’s deer cam on the night that she died.

Though no one knows exactly what happened to Tiffany Valiante on July 12, 2015, a couple of facts are known. On that date, she attended a graduation party with her parents, Dianne and Steve. At around 9 p.m., one of her friends asked to speak to Dianne and Steve and told them back at the Valiante home that Valiante had been using her debit card.

The conversation lasted less than 10 minutes and that Valiante denied the accusation (though a receipt from the card was later found in her room). According to WHYY, she and her parents discussed the incident after her friend left, an interaction her mother described as more of a squabble than a blowout fight.

But then, while searching Valiante’s car, Dianne saw her daughter slip the debit card in question into her pocket. She went inside to get Steve and when they returned, their daughter had disappeared.

“She was out by the car,” Dianne told WHYY. “I walked inside to get my husband. I only left her for one minute. I walked back out, she wasn’t there.”

What happened to Tiffany Valiante from that point? No one knows. As time passed and she didn’t return, her parents launched a search that turned up Valiante’s cell phone, apparently discarded at the end of their driveway.

“Tiffany never went anywhere without her cell phone,” Dianne told WHYY, explaining that her daughter had even gotten a waterproof case so that she could use her phone in the shower.

By 11:30 p.m. her parents were so alarmed that they called the police. But it was too late.

Twenty-seven minutes earlier, a New Jersey Transit train traveling southbound at 80 miles per hour had hit Valiante about four miles from her home with such force that all four of her limbs were torn from her body.

“When they first came to the house to tell us, I made them repeat themselves because I just was in shock,” Dianne told WHYY. “They just said she was hit by a train. They didn’t tell us anything else … We thought she was in a car with someone, that (the car) got hit. That’s what we initially thought. We were like ‘Oh God, who else was in the car?'”

By the next day, investigators officially closed the case. They claimed that Tiffany Valiante had thrown herself in front of the tracks and died by suicide. But as time went on, a number of other clues emerged that suggested that the truth could be more complicated.

The Investigation Into Tiffany Valinate’s Death 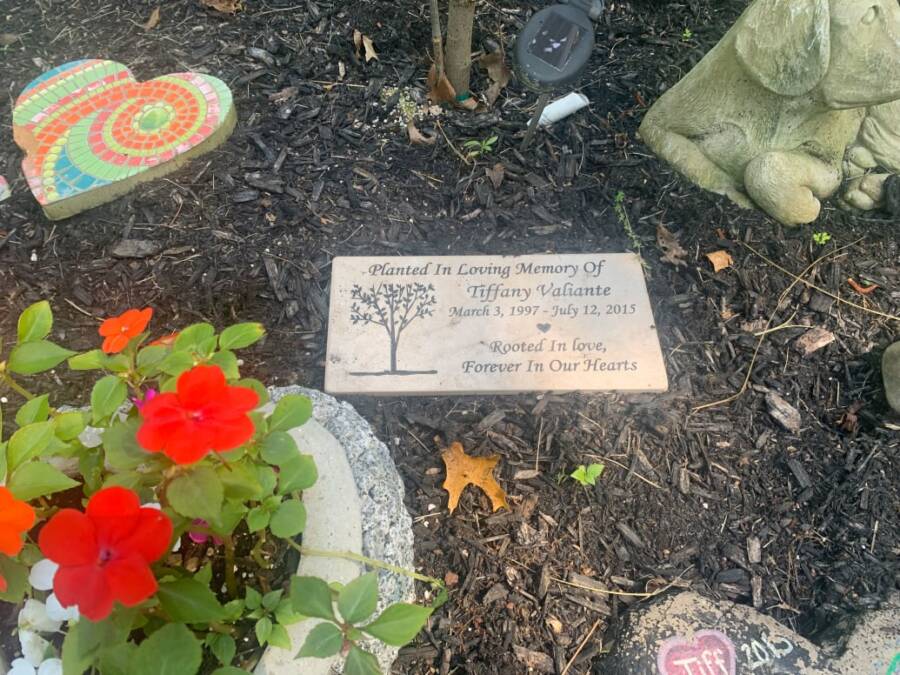 Valiante FamilyA memorial to Tiffany Valiante erected by her family.

A couple of things about Tiffany Valiante’s death seemed odd from the beginning. For starters, she was found barefoot and wearing just her underwear. But her family initially accepted the investigator’s findings and had her body cremated.

“Worst decision of my life!” Dianne told WHYY through tears. “I just assumed [the investigators] did what they were supposed to do.”

Dianne began to doubt the official conclusion about Valiante’s death about two weeks after her daughter died. Then, while wandering grief-stricken through the woods near her home, Dianne stumbled across her daughter’s missing shoes and headband in a neat pile.

They were nowhere near where bloodhounds had tracked her scent and more than a mile from where she had died on the train tracks. This struck Valiante’s parents as odd, as her autopsy found nothing about her feet that suggested she’d walked a mile without wearing shoes.

“Looking at Tiffany’s feet, they were as pristine as my little granddaughter’s feet,” the Valiante family lawyer Paul D’Amato told WHYY. “There’s no cuts, there’s no abrasions, there’s nothing.”

From there, other issues with the investigation into the girl’s death rose to the surface. The Daily Beast reports that much of the evidence collected by investigators had been improperly stored and become contaminated, including Valiante’s shirt. And NJ Transit had recovered an ax with “red marks” from the scene — which they later lost.

D’Amato also pointed out that Marvin Olivares, who was driving the train on the night of Valiante’s death, changed his story a number of times. Olivares first described how she had “darted” in front of the train, then said he didn’t see her until it was too late, then claimed that the girl had been crouching by the tracks. D’Amato and others believe that NJ Transit pushed the suicide theory to avoid accepting blame for her death.

What’s more, strange rumors started to spread in town about what had happened to Tiffany Valiante. According to the Daily Beast, a Wawa manager told investigators that he’d heard his teenage employees talking about how she had been abducted at gunpoint, forced to strip, and chased onto the train tracks. He implied that the friend who accused Valiante of using her debit card had somehow been involved in her abduction.

A number of teenagers were interviewed by investigators — they claimed to have no knowledge of what happened to Valiante — and D’Amato led the charge in 2017 for authorities to reevaluate the case.

“While we strongly believe [Valiante] was murdered, the complaint allows for the possibility that the co-conspirators did not intend to kill her, but that their violent actions still resulted in her death,” D’Amato said in 2017. “One way or another, they were responsible for her being on the railroad tracks, and they must and will be held accountable for their unconscionable conduct.”

To date, Tiffany Valiante’s death remains officially listed as a suicide. But her family and their supporters refuse to believe that she dropped her phone, walked four miles, and threw herself in front of a moving train. They’re hoping that Netflix’s Unsolved Mysteries, which is set to feature her death in 2022, will bring renewed attention to their cause.

“When you look at everything that we have so far, you walk away and you say: ‘It wasn’t suicide,'” D’Amato told WHYY. “But then you just can’t stop there. You say: ‘OK, what happened?'”

After reading about Tiffany Valiante’s mysterious death, look through these seven baffling cold cases that remain unsolved. Or, go inside the haunting disappearance of Brian Shaffer from an Ohio bar.