Omaha Beach And The Untold Horrors Of D-Day

Thousands of Allied troops were killed in the D-Day battle of Omaha Beach, when Germany's brutal defense caught them off-guard.

June 6, 1944 — also known as D-Day — was perhaps the single greatest turning point of World War II. It helped ensure the liberation of France from Nazi Germany and propel the Allies to victory in Europe less than a year later. But D-Day also came at a cost: namely, the loss of thousands of soldiers on the shores of Omaha Beach.

“Soldiers, Sailors, and Airmen of the Allied Expeditionary Force! You are about to embark upon the Great Crusade, toward which we have striven these many months,” began Supreme Allied Commander Dwight D. Eisenhower’s order of the day on that fateful morning.

“I have full confidence in your courage, devotion to duty, and skill in battle. We will accept nothing less than full Victory!”

Dwight Eisenhower reads his full order of the day for June 6, 1944. On D-Day, thousands of soldiers would die at Omaha Beach.

Before The Tragedy at Omaha Beach, Germany Prepares For An Invasion

Four years after invading Poland, German Führer Adolf Hitler had determined that the main threat to Germany loomed from the western allies and not the Russians.

Accordingly, on November 3, 1943, he issued Führer Directive Number 51 which called for a reorientation of German strategy to strengthen its western defenses in anticipation of an allied invasion.

“All signs point to an offensive against the Western Front of Europe no later than spring, and perhaps earlier,” Hitler wrote.

“For that reason, I can no longer justify the further weakening of the West in favor of other theaters of war. I have therefore decided to strengthen the defenses in the West, particularly at places from which we shall launch our long-range war against England.”

Hitler was correct in his assessment. The Allies were already planning for D-Day by the time he issued that directive.

‘Führer Directive 51 was the blueprint for the way Germany would fight the war for the rest of the conflict,’ explains Robert M. Citino, military historian and scholar at the National World War II Museum in New Orleans.

D-Day, code-named Operation Neptune, was the first big step in the liberation of German-occupied France and laid the foundation for the eventual Allied victory in all of Europe and the Western Front.

The invasion targeted a 50-mile stretch of the French coast in Normandy. Five sectors, or beaches, were selected for the attack: Utah, Omaha, Gold, Juno, and Sword.

The Americans led the invasions at Utah and Omaha Beaches, the British in Gold and Sword, and the Canadians in Juno. Pointe du Hoc, a prominent cliff between Utah and Omaha beaches, was to be invaded by an American battalion as well.

Footage of the D-Day Normandy landings at Omaha Beach and elsewhere.

The operation commenced shortly after midnight on June 6, 1944. British glider troops led the aerial assault toward the east near the city of Caen. The 82nd and 101st Airborne Divisions conducted the American airborne attack to the west.

The Allied fleet opened fire on the German coastal defenses as dawn broke on June 6th. A short time later, about 135,000 American, British and Canadian soldiers boarded Higgins Boats and began landing on the beaches.

Brig. Gen. Theodore Roosevelt Jr. — the eldest son of President Teddy Roosevelt — landed with the first wave of soldiers. When he discovered that his boat had landed south of its assigned position on Utah Beach, he opted to fight from where they were instead of relocate north. “We’ll start the war from right here!” he famously said. 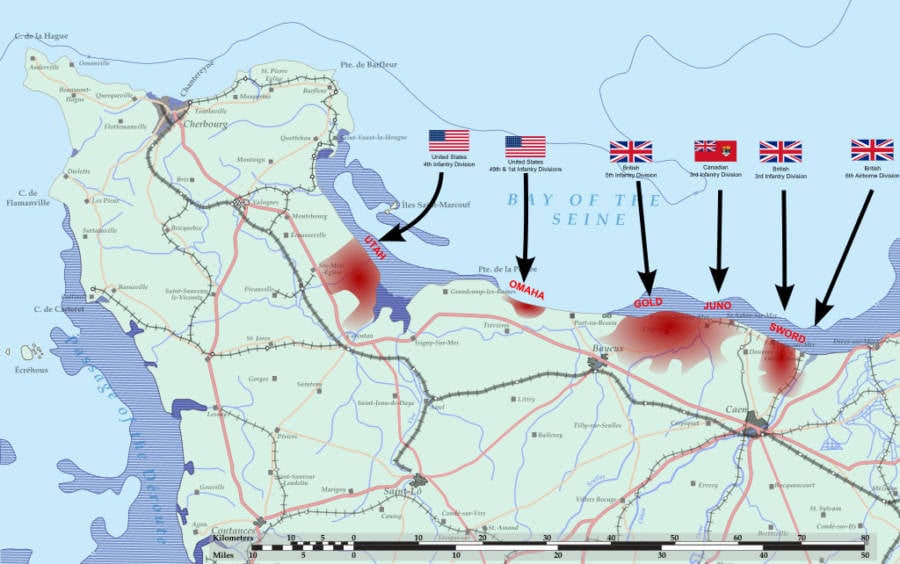 The Horrors Of Omaha Beach

Germany’s 352nd Infantry Division, controlling the higher ground with the help of an extensive system of trenches, were well-positioned to blanket the beach with bullets upon an invasion. Most of the first wave of soldiers were shot dead or drowned before they could even fire a shot. 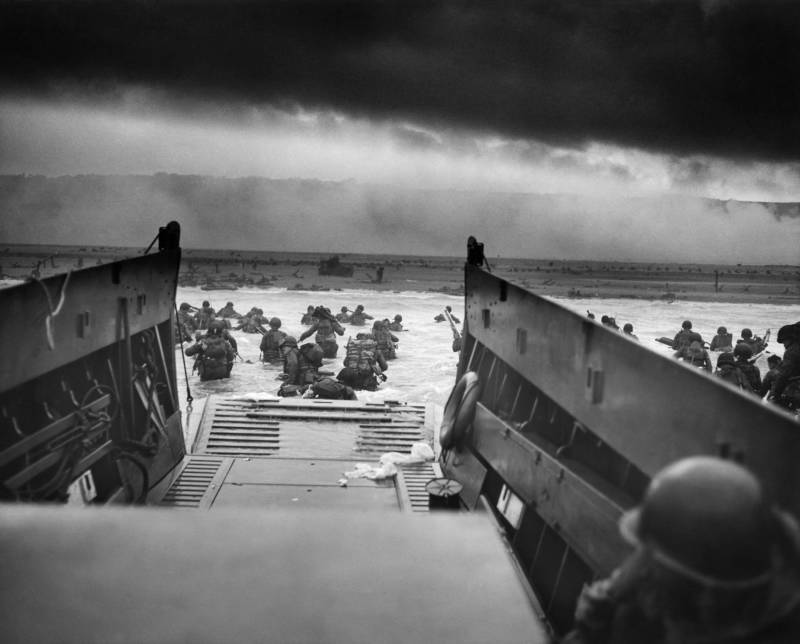 Robert F. Sargent/Wikimedia CommonsAmerican soldiers depart a Coast Guard-manned landing barge for Omaha Beach, encountering waist-high waters and a barrage of enemy fire. This famous photograph is titled “Into the Jaws of Death.”

In short, Omaha turned out to be an “epic human tragedy.” German gunners successfully rained deadly crossfire into the ranks of the invading troops. Thousands of injured and dead troops littered the beach and floated in the water. Destroyed landing crafts and tanks were strewn about the beach and water’s edge, and by about 8:30 a.m. troop landings ceased. 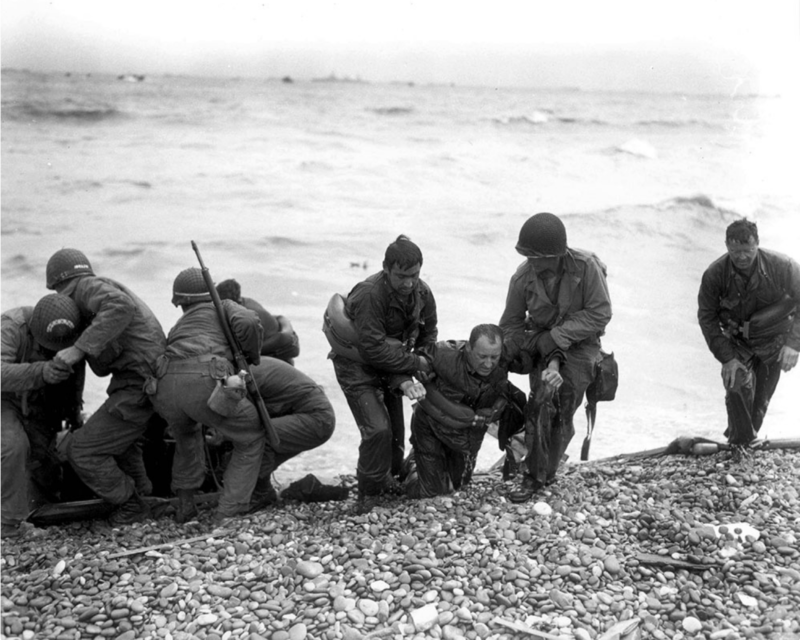 Weintraub/U.S. Army Center of Military HistoryAmerican soldiers help each other onto Omaha Beach. They reached the shore via life raft after their boats were sunk by German fire.

While there are no exact figures for the number of casualties suffered at Omaha Beach, the National D-Day Memorial Foundation estimates that “success came at the cost of about 3,000 casualties of the 43,250 men that landed on Omaha the first day” — far more than at any other beach. 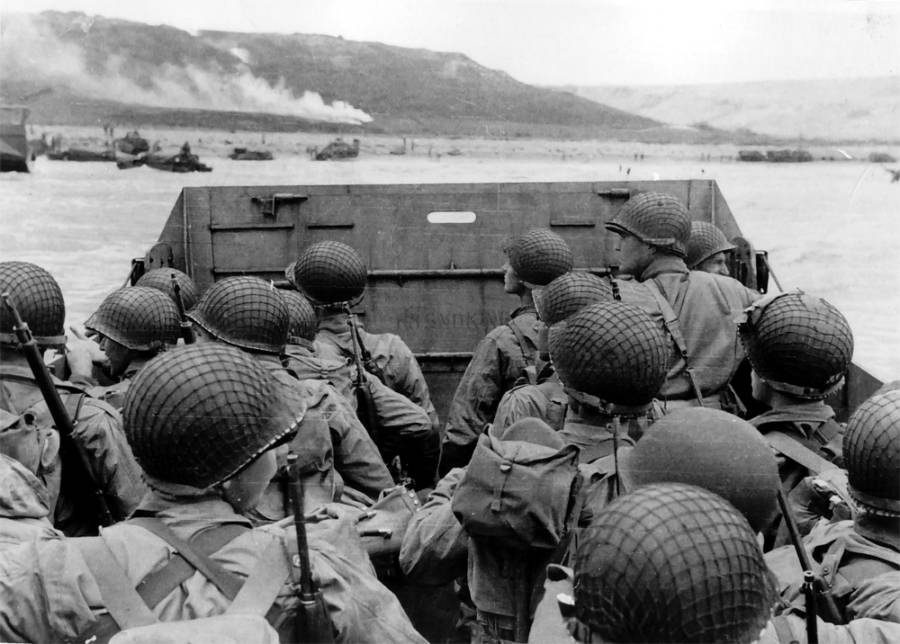 Several veterans have spoken out over the years about their experience the first day of D-Day operations.

“When we got within a thousand yards of the beach, you could hear the machine-gun bullets hitting off the front ramp of the boat,” recalled Lambert, a medic who was in the first wave to hit Omaha Beach. 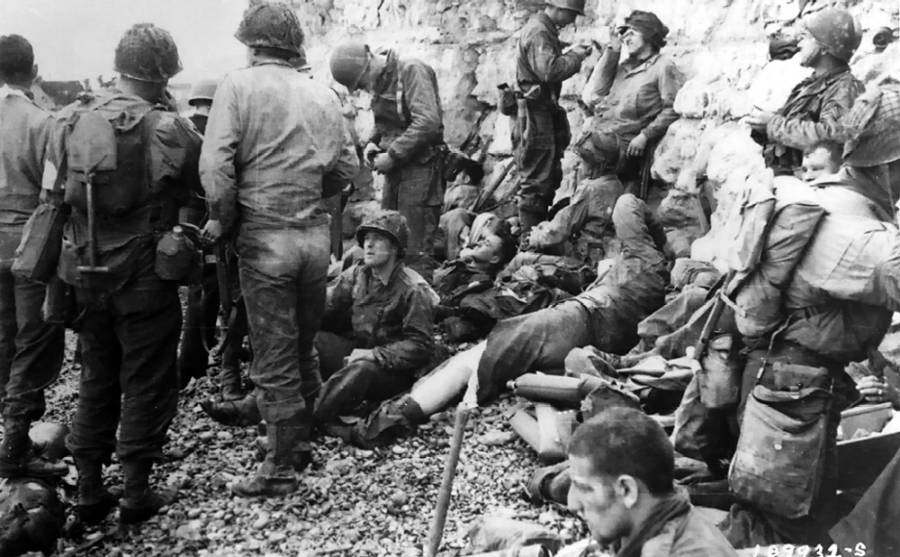 “The ramp went down, and we were in water over our heads. Some of the men drowned. Some got hit by the bullets. The boat next to ours blew up. Some of those men caught fire. We never saw them again.

“When we got to the beach, I said to one of my men, Cpl. Meyers, ‘If there’s a hell, this has got to be it.’ And it was about a minute later that he got a bullet in his head,” he added.

“All I remember is mayhem — dead bodies floating in the water, busted equipment,” recalled Allen, who was also in the first wave at Omaha. “We lost a lot of good men that day.”

Trippon had to shed his ammunition, grenades, and weapons in order to swim to shore. “All the time the German machine-gunner was mowing people down. Why the hell I didn’t die there I can’t say. I guess he was too busy killing other guys.

“There were so many bodies lying in the water they stopped bringing any more troops ashore because it was freaking people out to see all these guys dead. They had to bring bulldozers in to push the bodies into a trench so they couldn’t be seen.”

“The noise was deafening. Big guns fired, engines on vehicles roared, men shouted and geysers of water erupted around our craft. It seemed like mass confusion,” Shotwell recalled. “I felt excited, probably because I had no combat experience at all….Like most kids, I had this feeling of invincibility and I thought nothing could happen to me.”

“Bits and pieces pop into focus…a hand. An arm with no body around it. A foot. A helmet with a head still in it….I wondered if the next shell would be mine.”

Bradley wrote in his memoir that: “Omaha Beach was a nightmare. Even now, it brings pain to recall what happened there on June 6, 1944. I have returned many times to honor the valiant men who died on that beach. They should never be forgotten. Nor should those who lived to carry the day by the slimmest of margins.”

Steven Spielberg’s epic war movie Saving Private Ryan is notable for its opening scene which included a depiction of the Omaha Beach landing.

Numerous World War II veterans have stated that Saving Private Ryan is the most realistic portrayal of combat they have ever seen. The American Historical Association reported on the film shortly after its release in 1998:

Saving Private Ryan‘s opening sequence (the D-Day landing on Omaha Beach) is overwhelming. Spielberg’s mastery of sound, editing, camera movement, visual storytelling, narrative flow, performance, and color combine to assault a viewer, to place each and every member of the audience directly into the combat experience.

CBS News reported that the movie’s Omaha Beach segment was so realistic that it “caused many WWII veterans to experience flashbacks about their own personal tragedies of war.”

“Watching the movie was like being back in battle,” said WWII veteran Roy Gass.

Want to learn more about D-Day and World War II? Check out these D-Day photos and stories that capture the gravity of the Operation Overlord, the Normandy invasion. Then discover Truk Lagoon, World War II’s most haunting undersea graveyard.