Inside Operation Red Dog, The Bizarre And Disastrous KKK Plot To Take Over A Caribbean Nation

In 1981, a crew of American and Canadian neo-Nazis and KKK members plotted a violent overthrow of the Dominican government, but their ship never made it out of New Orleans. 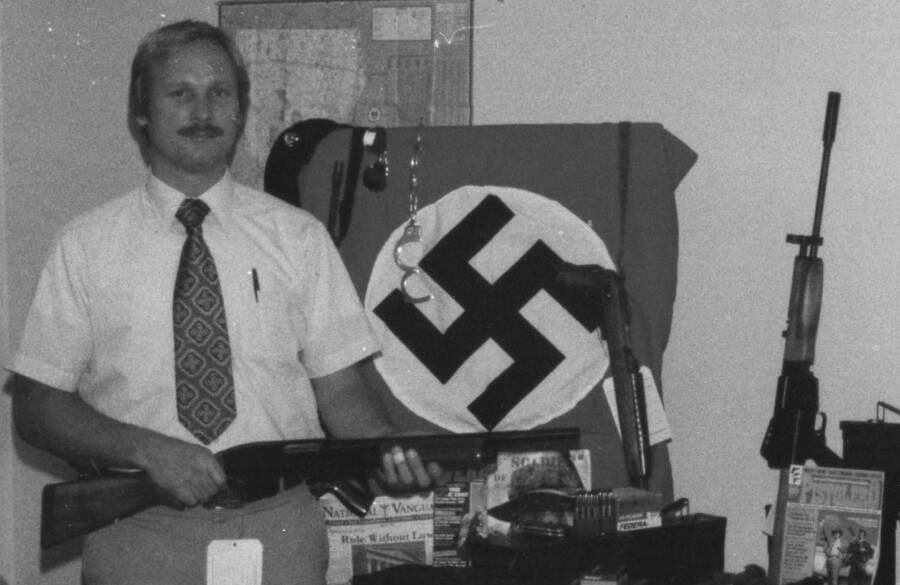 New Orleans was unusually calm and dry on the night of April 27, 1981. In spite of the balmy breeze that stirred the evening air, a political storm was brewing in The Big Easy.

On the docks of the Crescent City, a small group of white supremacists, armed to the teeth like a squad of John Rambos, prepared to cross the Gulf of Mexico.

The Operation Red Dog mercenaries gathered where the Mississippi meets the Gulf, waiting to set sail for the verdant shores of the Caribbean. Their goal: to create their own white ethnostate.

The American and Canadian mercenaries were a jumble of KKK members, neo-Nazis, and other white nationalists determined to assert their self-proclaimed superiority and make a fortune.

Operation Red Dog aimed to overthrow the government of Dominica and establish a white-run hedonistic island, with a little help from a disgraced former leader.

Something between The Birth of a Nation and the Three Stooges in terms of ideology and execution, their boondoggle was dubbed the “Bayou of Pigs.”

The Men Behind Operation Red Dog 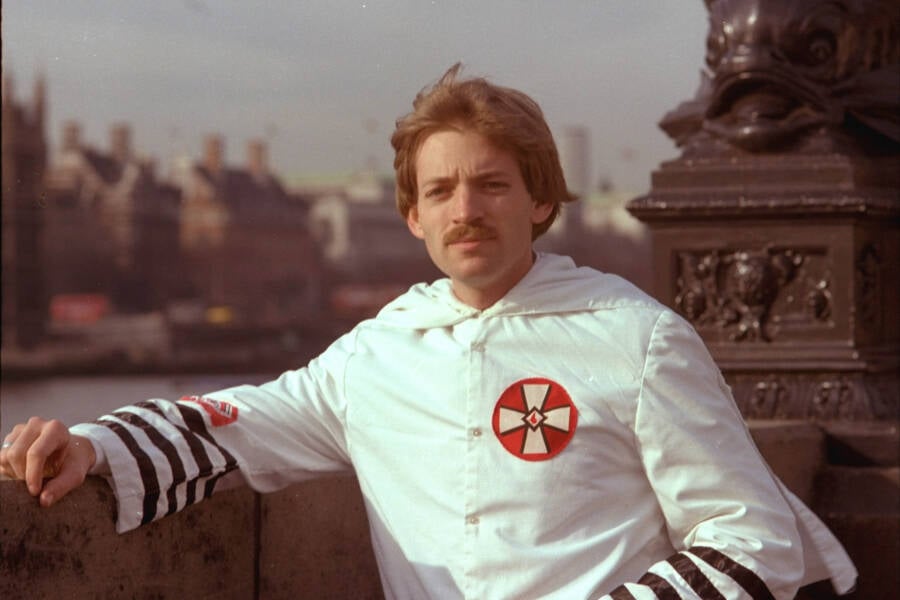 Operation Red Dog’s plot to overthrow Dominica was a who’s who of American and Canadian white supremacists in its funding, planning, and attempted execution. Even notorious KKK member David Duke was involved, as he played a pivotal role in introducing several of the key players.

L.E. Matthews Jr. and James C. White, white supremacists from the American South, put in $57,000. In exchange, they were promised shares in a future company set to run the island’s casinos, brothels, and various other debauched businesses. The company was to be called Nortic Enterprises.

Stephen Don Black, a KKK Imperial Wizard, and Joe Daniel Hawkins, another Klansman, planned the operation. Michael Perdue, a Texas-based mercenary and KKK member, was tagged to lead the invasion. He decided on the ultimate target of Dominica.

Stephen Don Black raised his son, Derek Black, as a white nationalist. As an adult, however, Derek disavowed his father’s beliefs.

Perhaps the most interesting collaborator was Patrick R. John, the Black former Prime Minister of Dominica. The populist head of state had been ousted from running the country, and desperately sought to return to power, even if it meant betraying his country to the white supremacists behind Operation Red Dog.

John was driven by a personal vendetta to oust his political enemy, his American-friendly successor Prime Minister Mary Eugenia Charles, called the “Iron Lady of the Caribbean.” 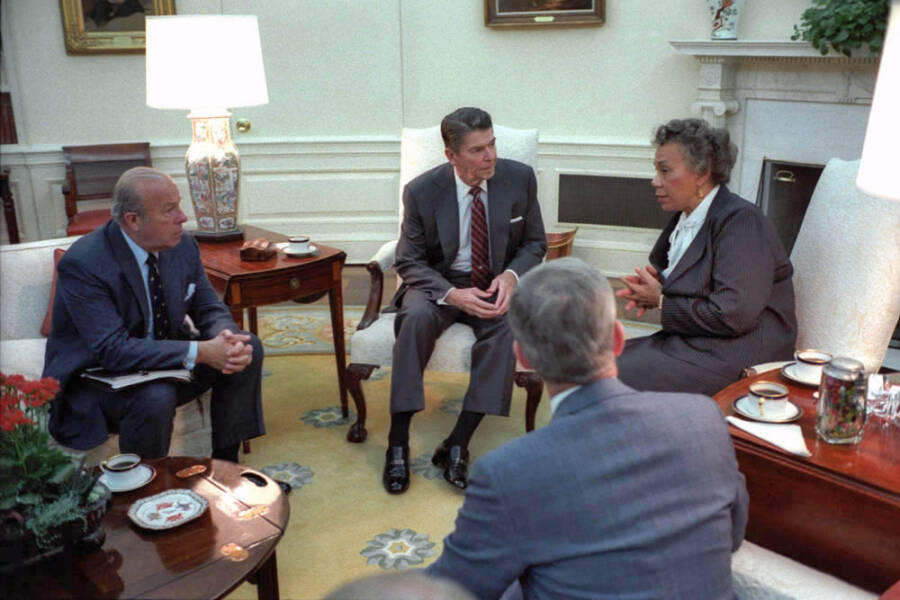 Perdue commented once that overthrowing Charles would help stem the influence of communism in the region, as she had “really made some ties with communist Cuba.”

But Dominica held other, even more tempting attractions for the Red Dog conspirators. 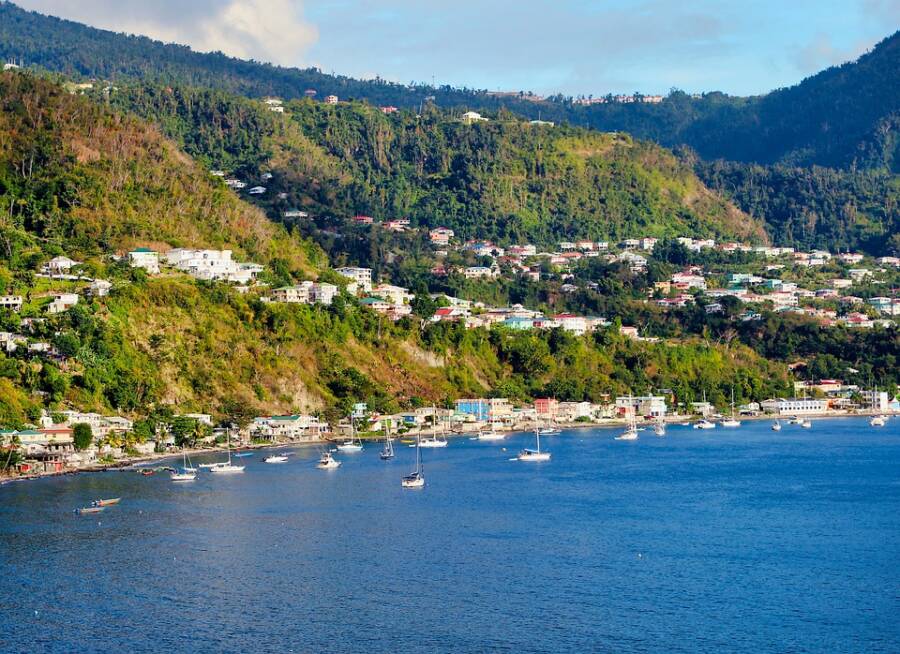 PixabayDominica’s stunning beauty was only one draw for the Operation Red Dog operatives.

Dominica is a small British commonwealth island, one of the poorest islands in the region, sandwiched between French Guadeloupe and Martinique. Rich in volcanic soil, the island’s cliffs are dotted with technicolor houses, and the warm Caribbean Sea crashes against its coasts.

By 1981, devastation from 1979’s Hurricane David, which in its wake had left 75 percent of the island’s population homeless, and the ever-present threat of Dreads, a violent Rastafarian group on the island, rendered Dominica vulnerable.

Additionally, the Red Dog operatives weren’t the first white supremacists to set their sights on the Caribbean. The Confederate secret society Knights of the Golden Circle had plotted to create an empire of slavery in the Caribbean and South America as far back as the 1850s.

Similarly, Operation Red Dog originally conceived of conquering Dominica merely as a launchpad for staging a coup against communism in order to take over yet another Caribbean island, Grenada.

However, after further revisions, the Bayou insurgents decided to instead overrun the country and establish offshore casinos, brothels, bars, drugs, along with other lucrative means of attracting tourist dollars and thereby create their own debauched Garden of Eden, run by whites.

Inside The Bayou Of Pigs 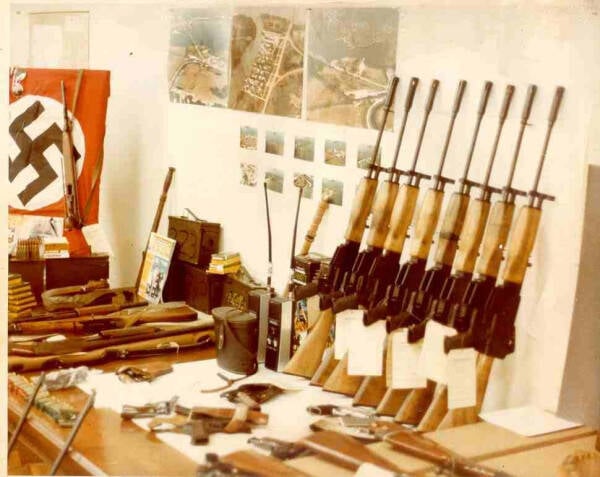 ATFAuthorities confiscated weapons from the bayou of pigs conspirators.

The would-be invaders ferried their rifles, shotguns, handguns, and ammunition from their truck into the boat they’d chartered. Grenades, dynamite, a rubber raft, and black-ops face paint were also on the ship’s log, as well as Confederate and Nazi flags.

With this stockpile of supplies, the insurgents sought to traverse 2,000 miles of open water and claim their new ethnostate.

But Operation Red Dog was dead before it ever began, as a pair of tipoffs neutered the invasion.

First, Vietnam vet Mike Howell, who owned the boat the mercenaries attempted to charter, got suspicious when Perdue told him that they were staging a covert coup for the CIA. Thinking the tale sounded unlikely, Howell alerted the federal agents of the Bureau of Alcohol, Tobacco, and Firearms to the plan.

Another tipoff came from Dominica. An imprisoned soldier asked the policeman who was watching his cell to pass a note to one of the other conspirators for him. The note contained key details about the plot and led directly to Patrick R. John’s arrest.

The Red Dog operatives’ boat was stopped before they even left New Orleans’ waters. A flash of light cut through the Louisiana darkness, and a booming voice declared: “We have a SWAT team surrounding you. You’re not going to Dominica, you’re going to jail.”

Supplied with reams of firepower, the Red Dog operators decided to surrender without a fight. In fact, by that point, three of the operation’s 13 members were actually undercover agents.

During a previous meeting about the operation, one of the agents had pointed out the parallels between Operation Red Dog and the Bay of Pigs, the U.S.’s botched attempt to invade Cuba.

“More like the Bayou of Pigs” retorted another colleague. Thus, the case’s nickname was born.

The Aftermath Of Operation Red Dog 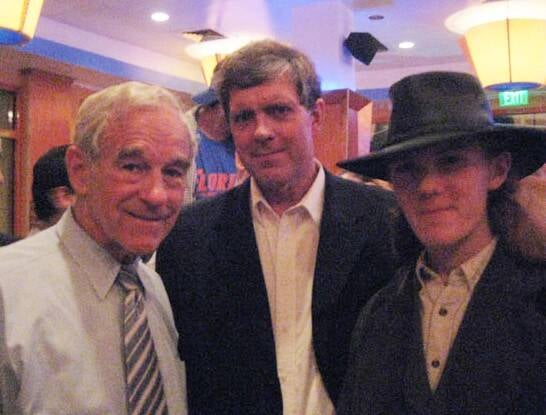 Most of the mercenaries involved, including Michael Perdue, were found guilty of conspiracy and violating the US Neutrality Act by attempting to overthrow a foreign government. Perdue pointed fingers at establishment conservative figures, claiming they knew all about their invasion.

Former Texas Governor John Connally and Representative Ron Paul were nearly subpoenaed in connection to the plot, but the presiding judge refused and claimed the high-ranking politicians had no connection to Operation Red Dog.

Patrick R. John was sentenced to 12 years in prison for conspiracy to overthrow the government, but he was acquitted of treason. He ended up serving only five years.

The legacy of his betrayal followed him, as the judge who sentenced him stated, “You could not take the idea of not being leader of Dominica, so you went to the limit to put yourself back into power.”

John later became a soccer administrator embroiled in a FIFA elections scandal in the 2010s.

Despite the stunning failure of Operation Red Dog, it inspired a sequel in 1986. Another set of self-styled mercenaries conspired to overthrow the government of Suriname from a marina in Louisiana. The would-be invaders were clad in business attire but packed the same kind of firepower as the earlier invaders, including shotguns and revolvers.

Like Operation Red Dog, this second invasion attempt failed before it even began.

The media dubbed it “Bayou of Pigs II.”

Now that you’ve read about the failure of Operation Red Dog, learn about Operation Sea Lion, the Nazis’ aborted attempt to invade Britain and the CIA’s plan to infiltrate the media.