FacebookOpus Bono Sacerdotii’s ethos is so unbelievable that it reads like bad parody. But it’s been helping and protecting sexual criminals since 2002.

It’s a reinvigorating sight to behold when sexual abuse victims receive a compassionate outpouring of support. From financial charity to emotional assistance, we can do a good job of helping people back up. According to a new exposé by the Associated Press, however, the perpetrators of such vile criminality seem to be receiving just as much, if not more, monetary and psychological help.

A small nonprofit called Opus Bono Sacerdotii has been operating out of rural Michigan for nearly 20 years now. The oddly clandestine organization is comprised of a series of unmarked buildings. Its business model? Giving money, legal help, shelter, and transportation to hundreds — possibly even thousands — of Catholic priests who’ve been accused of sexual assault all over the United States.

There’s no shortage of confounding examples. Opus Bono made one priest who was criminally charged with sexual abuse of a teenager into its legal adviser. A serial pedophile jailed for sexually abusing dozens of children was visited by the nonprofit on a regular basis and given commissary cash.

Though everyone has a right to a defense lawyer, the organization has a peculiar way of helping some of the most disreputable, criminal, and sexually deviant men in the country. One priest who admitted to sexually assaulting children under 14 had his defense paid for in full by the organization.

It goes on and on, and it only gets weirder.

The Catholic Church has made it a point in recent years to assuage the public about its relationship with pedophiles. The Pope made public statements about holding priests accountable for their treatment of nuns, and the official party line is that sexual crimes will simply no longer be tolerated.

The AP, however, has found that some of the same powerful clerics who have disavowed such behavior have sent checks to Opus Bono. Meetings were arranged, blessings were sent — clear gestures of secret support.

Naturally, Catholic leaders have denied any ties to the group. The AP investigation has not only found that to be false, but has uncovered evidence that Opus Bono has established and maintained networks that reach all the way to the Catholic Church’s main nerve: the Vatican.

This journalistic endeavor began with hundreds of pages of documents obtained through Freedom of Information Act (FOIA) requests, as well as dozens of interviews with lawyers, clergy members, and former Opus Bono employees.

A few months ago, two of the group’s founders were booted out when the attorney general of Michigan discovered the nonprofit misled contributors and misappropriated funds. A third co-founder — a priest — was suddenly fired in early July after the AP asked him about allegations that he had sexually abused a child.

FacebookThe nonprofit has been running out of unmarked buildings in rural Michigan for nearly 20 years, and has exclusively supported and protected sexually abusive clergymen.

In a strategic move ripped from the victimhood playbook, the nonprofit has diverted the discourse from abuse allegations against priests to the Church being targeted in bad faith.

Since 2002, Opus Bono and fellow conservative Catholic groups have blamed the media instead of the alleged criminals, claiming these baseless accusations harm the Church and threaten to erode the Catholic faith.

In other words, those accused of raping children have been complaining about how unfair the discussion about these alleged crimes is. The AP‘s research has found that Opus Bono positioned itself as the yin to the Survivors Network of those Abused by Priests’ yang.

Opus Bono sees those whose careers are ruined — priests who abuse children — as the real victims. Co-Founder Joe Maher, for instance, publicly complained about how people just don’t seem to help these priests once they’ve been accused of fondling children. 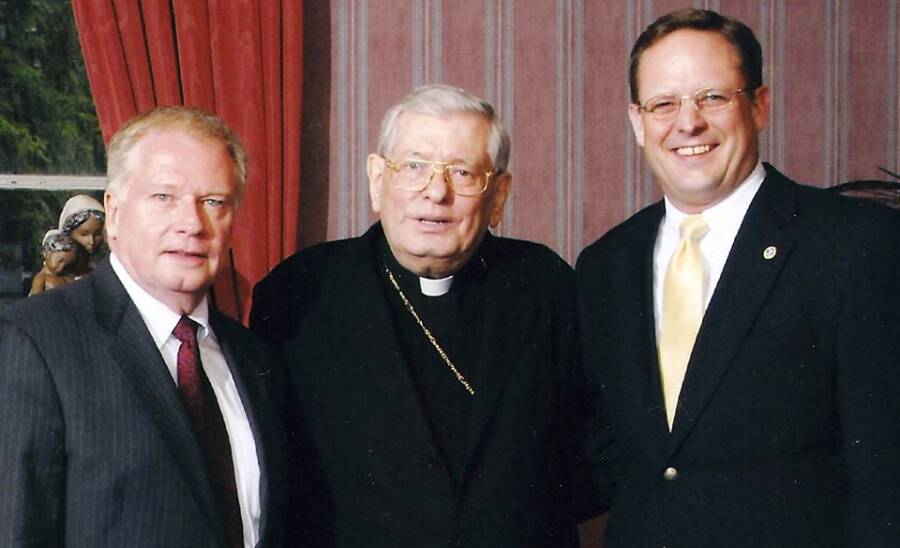 Rev. Eduard Perrone presided over Detroit’s The Assumption of the Blessed Virgin Mary Church for 25 years, until he was removed earlier this month. A church review board found there was a “semblance of truth” to decades-old allegations that Perrone sexually abused a child.

As a co-founder of Opus Bono, the severely conservative, 70-year-old pastor said he “never would do such a thing.” Perrone kept his church’s pamphlet area well-stocked with brochures for the Opus Bono all along, and may well now actually need their services.

Before he helped found the organization, Perrone and his church hired at least two priests who had sexual abuse accusations lodged against them. These alleged assaults occurred in other states, but the Catholic Church has previously been found to simply relocate its accused priests instead of firing them altogether.

One of the priests Perrone hired later admitted that he had molested up to 50 children during the 1980s and 90s.

In 1999, Perrone hired a West African priest named Komlan Dem Houndjame. Detroit Archdiocese officials realized two years later that Houndjame had been accused of sexual misconduct in both Detroit and Florida. In 2002, police charged him with sexually assaulting a member of the church’s choir.

The Archdiocese says that it asked Houndjame to return to his home country of Togo. Instead, he went to a treatment facility in St. Louis. 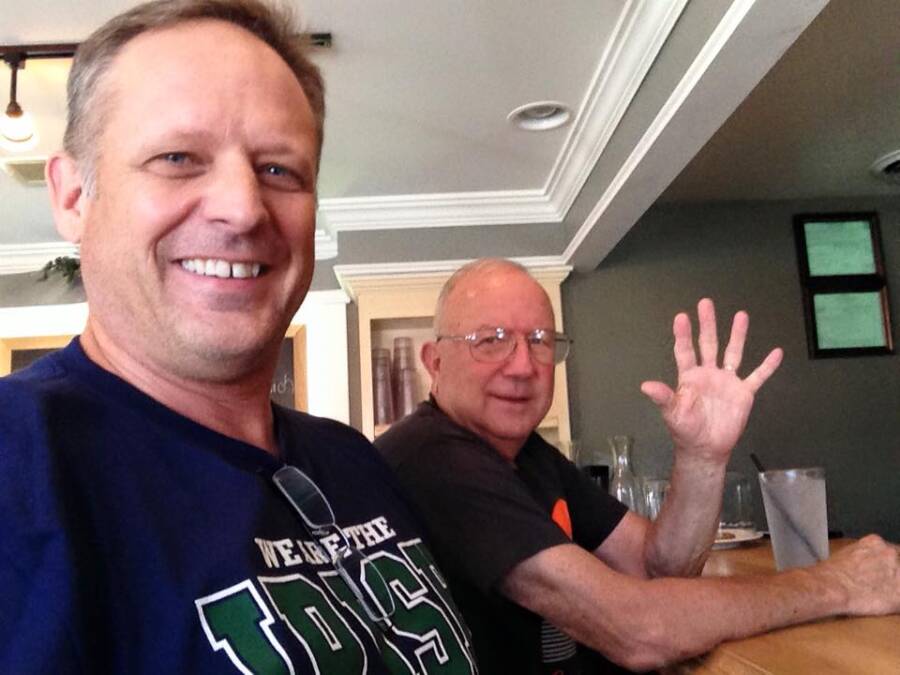 FacebookOpus Bono President Joe Maher sharing a meal with an unidentified priest. The Facebook caption read: “Serving priests and stopped for lunch, thanks to all our Facebook friends for your prayers – they are much needed!”

The parishioner who accused Houndjame of rape said Perrone told him to “just walk by him and ignore him” when she came forward. When Houndjame was charged, Perrone asked the congregation for public and financial support.

Joe Maher, who’d help co-found Opus Bono, was so moved by this call to action in support of a priest that he served as Houndjame’s media spokesman. He also invited the priest to live in his home with his family, according to Maher’s daughter Mary Rose. She was 10 years old at the time.

It was around this time that countless priests from across the country flooded Maher’s voicemail with calls, pleading for help, and leading the man to realize he should start an organization. He and Co-Founder Peter Ferrara began mobilizing. They picked priests up themselves, bought them plane tickets, and found lodgings for them in hotels, apartments, or “halfway houses.”

“We’re on our way to help a priest in need, in the Midwest, so it’s going to be a long trip and not much sleep and it could be potentially a dangerous situation,” said Maher in a video he posted on the nonprofit’s Facebook page.

He didn’t explain why this might be dangerous, though public awareness and anger against a seemingly guilty rapist might be the reason. 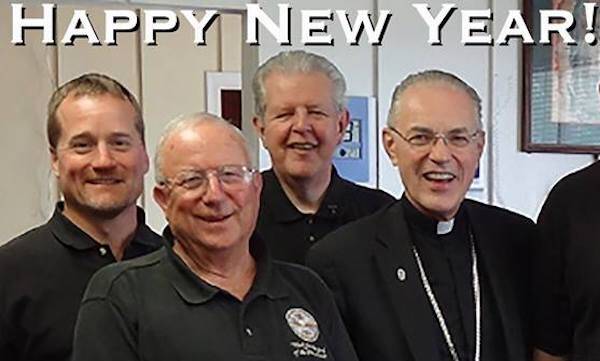 Opus Bono also helped Jason Sigler, an ex-priest from Detroit who was convicted of molesting dozens of children in New Mexico and Michigan. A former altar boy said in a lawsuit that Sigler initiated “hundreds of sexual abuse events, each a violation of criminal sexual penetration laws.”

Maher funded the man’s commissary, took his calls, and visited him behind bars on a regular basis, according to his daughter, Mary Rose. She also said her father introduced her to Sigler before and after his conviction.

“I really didn’t know who Jason was,” she said. “I had only met him once and I didn’t understand why I had to speak to a priest in prison.”

Mary Rose said she and her friend started working for her father’s nonprofit when they were teenagers. They routinely spent time with men accused of sexual abuse. She also said she and her father and other employees often drove them around town and took them to lunch.

In 2002, Maher reached out to Father Richard John Neuhaus, the editor of a conservative Catholic journal, First Things, and unofficial adviser to President George W. Bush. Maher sent him a news article about his nonprofit, hoping to get some support.

“Some priests have suggested I write to you and let you know what we’re doing,” Maher wrote.

“More power to you!” Neuhaus replied. “The demand that a person ‘must be punished,’ no matter how long ago the offense or the repentance and transformation of the offender is nothing more than a demand for vengeance.”

“The church benefits from what we’re doing but it doesn’t give it the support,” said Perrone. “The whole point of this is to be a counterpoint to a movement which is also outside the church, a movement of dissent and against the priesthood.”

Ironically, it was Maher’s own daughter, Mary Rose, who forced authorities to look into Opus Bono when she wrote a letter to Michigan’s attorney general, accusing the nonprofit of financial misconduct in 2017.

As evident by her social media profile, Mary Rose Maher endured abuse by both Eduard Perrone and her own father.

“A simple investigation into the Michigan non-profit charity Opus Bono Sacerdotii would bring to light the millions of embezzled dollars, years of mail fraud, and the constant systemic abuse of donations,” she wrote.

What investigators consequently discovered was clearly deceptive fundraising on behalf of the organization. Maher and Ferrara had also violated charity laws by using donations to cover personal expenses — lunches, chiropractor sessions, power tools for their homes, and more.

“Maher and Ferrara took what they wanted, when they wanted it,” the attorney general’s office said, ordering that they repay more than $500,000.

Since then, Mary Rose launched her own nonprofit. It aims to support victims of sexual abuse, and has co-opted some of the same methods her father’s group has used — shelter, legal aid, and emotional support.

Her father, meanwhile, though barred from ever running a nonprofit in Michigan again, just launched a second nonprofit. Registered in Indiana, the Men of Melchizedek lists Maher as its president. The group said it will provide the same benefits to priests as Opus Bono did.

“We turn no priest away,” it said on its website.

Maher’s attorney warned in a letter to the Michigan attorney general, quite disconcertingly, that “more vulnerable beneficiaries may be lost to suicide during the transition.”

After reading about the Opus Bono Sacerdotii nonprofit organization that exclusively supports clergymen accused of sexual abuse, learn about the sex app that lets users request and grant consent before doing the dirty. Then, read about young priests no longer taking up the exorcist calling.